We started off this week’s survey of politics and government insiders with questions about the ancillary effects of Ted Cruz announcing for president this week.

Two-thirds of the insiders thought Cruz's early announcement would not affect the timetable of his one of his biggest potential Texas rivals in the GOP field — former Gov. Rick Perry. About a quarter said Cruz's declaration would bump up Perry's plans.

Meanwhile, Cruz's fundraising has already become a priority topic when it comes to his viability in what is sure to be a crowded GOP field. His camp said this week that the goal is to raise between $40 million and $50 million for the party primaries.

That wouldn't be nearly enough to win the nomination, according to the insiders. Just 8 percent thought the eventual nominee would need to raise less than $50 million.

And here's a big spender alert: 8 percent believe the GOP nominee will need to raise more than $500 million.

The House gave approval this week to former Speaker Tom Craddick's ban on texting while driving. Making light of his failure to make law out of his proposal in two previous sessions, Craddick said on Thursday, "The third time's the charm."

The insiders agree with him, with 60 percent thinking that he will be successful this time around.

With several hot-button laws being challenged in court, we closed this week's survey asking which of them are most likely to survive review. 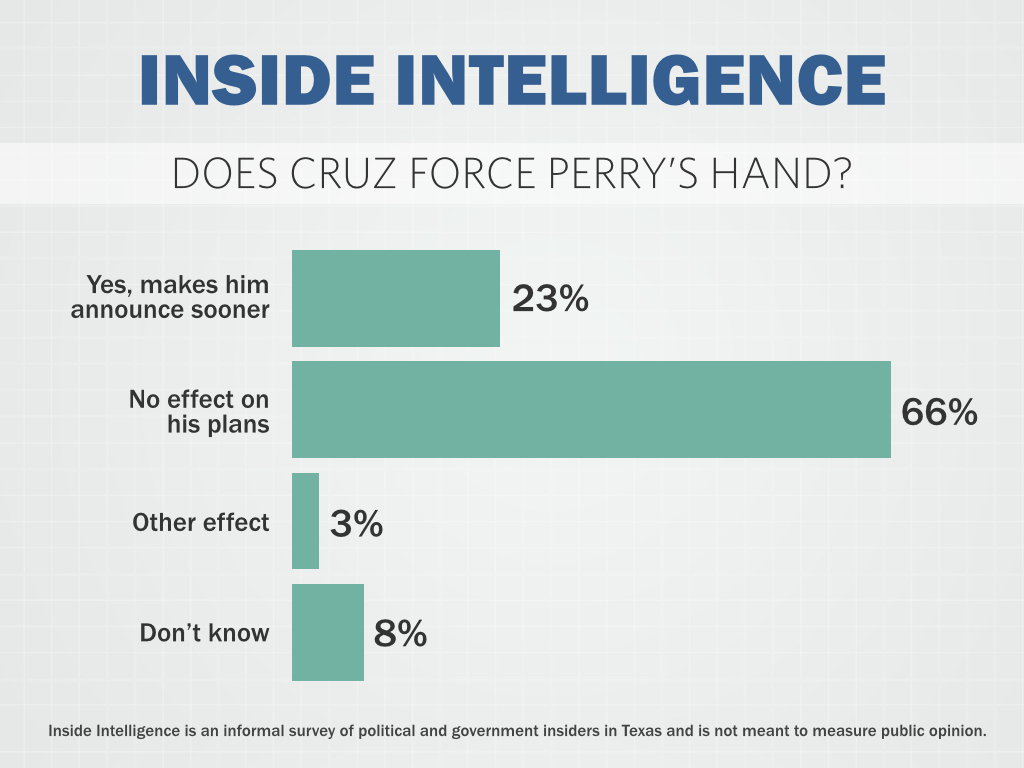 Does Ted Cruz’s announcement this week of his candidacy for president change Rick Perry’s timetable for entering the race?

• "I don't think Perry will be bullied into altering his plans by the actions of Ted Quixotic."

• "There may be just as much value in the speculation on 'will he or won't he' for several more months. Why not ride that?"

• "The field's schedule, including Perry's, was set once Jeb Bush started to vacuum up available dollars."

• "I think Perry will ask for Cruz's resignation from the Senate because Texas needs 2 full-time senators."

• "Perry will need to get in sooner since Cruz will now begin drawing money out of TX at a good clip. Perry's lack of holding an office is now going to hurt his fundraising potential." 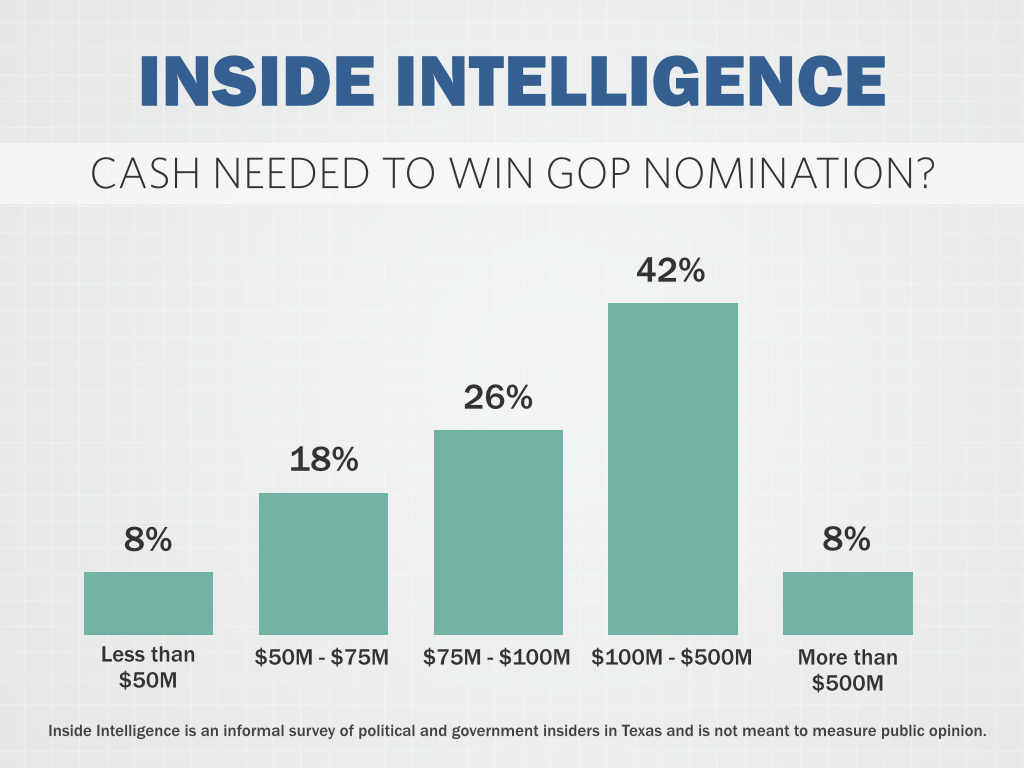 An early focus of talk on Cruz’s candidacy is on his fundraising prowess. What will the winning GOP candidate need to raise to secure his party’s nomination for president?

• "It depends on the candidate. Someone looking to build a grassroots movement doesn't need as much funding as a candidate who plans to gain traction using traditional media and mail."

• "In 2012, Romney raised about $88 million through the 1Q of 2012. Considering the crowded field that will likely go as deep into the campaign as last time around, the fight for money will be vicious and the winner will need to raise more than what was raised in 2012 to secure the nomination."

• "Directly, a bunch. But not as much now that candidates can navigate within a super PAC's flight path."

• "The gross fundraising number is much less important than how the candidate spends money and what his/her Super PAC raises and spends. We are working toward a day where the candidate committee only needs to pay a scheduler, press secretary and the charter jet company. The super PAC does the rest." 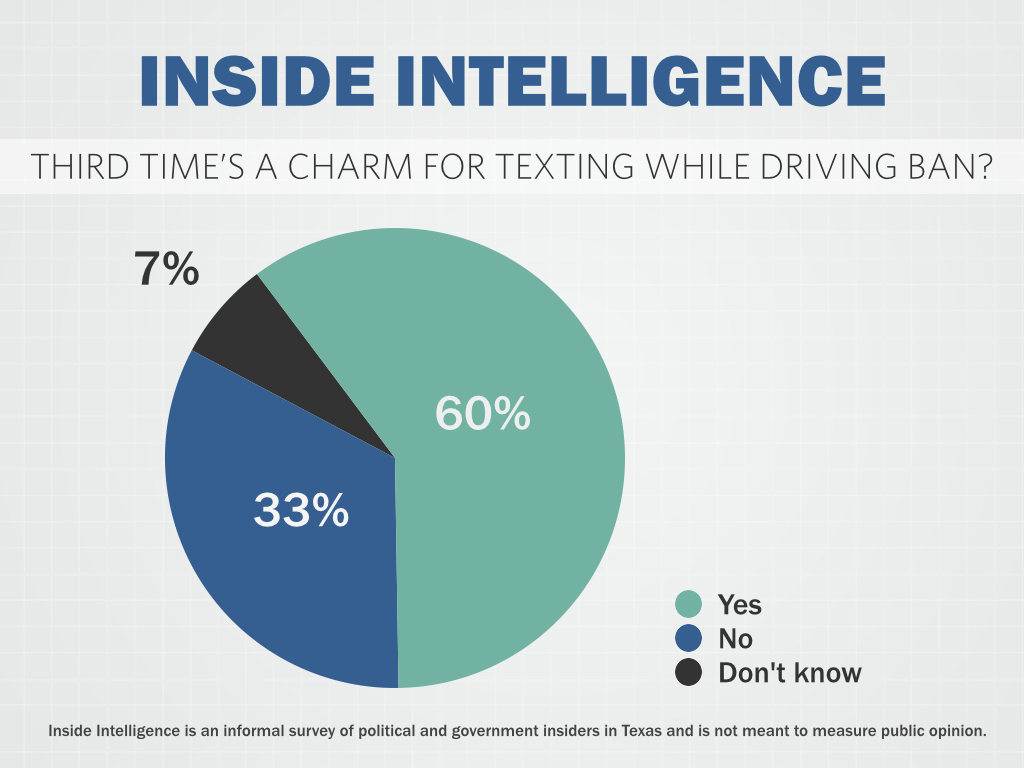 A texting-while-driving ban is being debated this week on the House floor. Will former Speaker Tom Craddick succeed on his third attempt to make this a law?

• "According to The AP last year, Abbott said he is against government mandates that 'micromanage adult driving behavior.' Leads me to believe he'd veto it."

• "He'll pass it - but will it be vetoed? Two months ago, that looked likely. That may be changing."

• "Trying to tyke this with talk-to-text, and this dang autocorrect keeps messing me pup."

• "Probably in the House, but the Senate is doubtful, thanks to the seriously rightward shift in that body."

• "Yes. How can Abbott veto it if it seeks to standardize the law and eliminate the patchwork quilt system of different policies we have now? Isn't that the same thing he complained about in regard to plastic bag bans, etc.?" 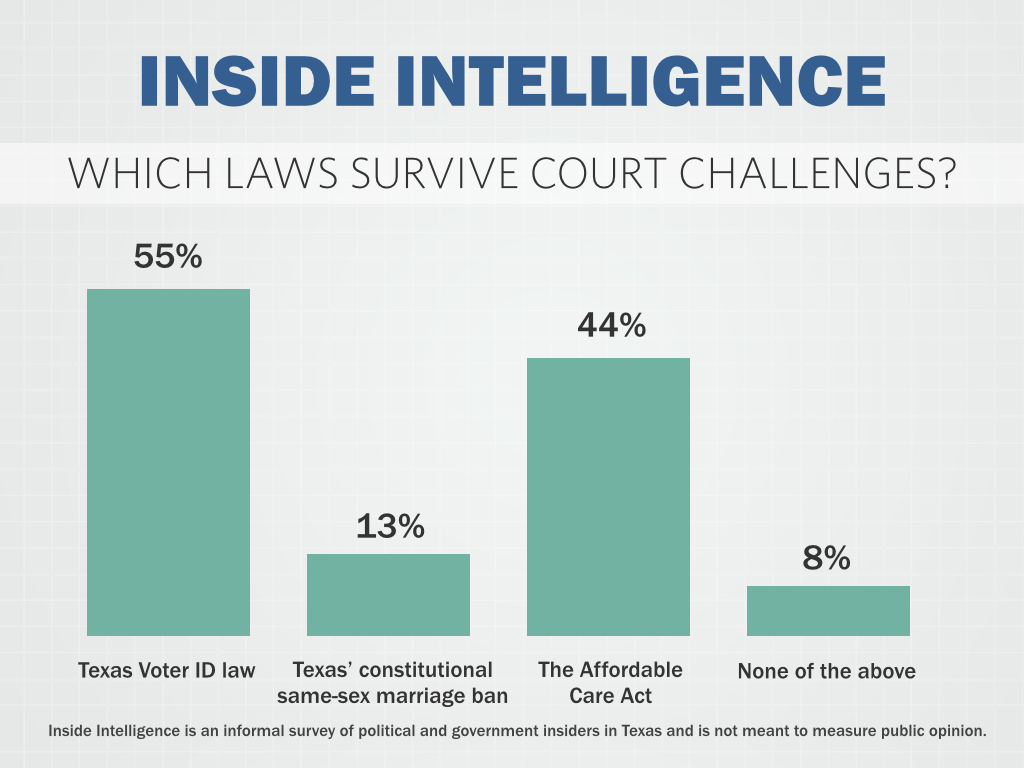 Of these laws, which ones will survive a court challenge?

• "It should also apply to the same-sex marriage ban, but it doesn't. Federal courts seem intent on finding a right to gay marriage, even if they have to search the Constitution's mythical 'penumbra.'"

• "Roberts won't risk the reputation of the Court by overturning ACA. He is too busy remaking other, more important aspects of our democracy through the concentration of corporate power."

• "The liberals have better lawyers than we do."