We started off this week’s survey of politics and government insiders with questions about what new measures might be taken to curb state spending.

About two in five thought the Legislature would act to change the way the constitutional spending cap is formulated to curtail growth of future budgets. Another quarter believed lawmakers would endorse exempting tax relief and/or debt reduction from future spending cap calculations.

One in five insiders, meanwhile, thought lawmakers would opt for neither measure while 8 percent said they would do both.

The insiders weren't convinced that lawmakers would bust the spending cap this session. Nearly 60 percent thought it wouldn't happen, either because lawmakers decided the question on their own (34 percent) or because voters knocked them down (24 percent).

A majority of the insiders thought lawmakers would give the OK to half-day pre-K programs as opposed to full-day programs. 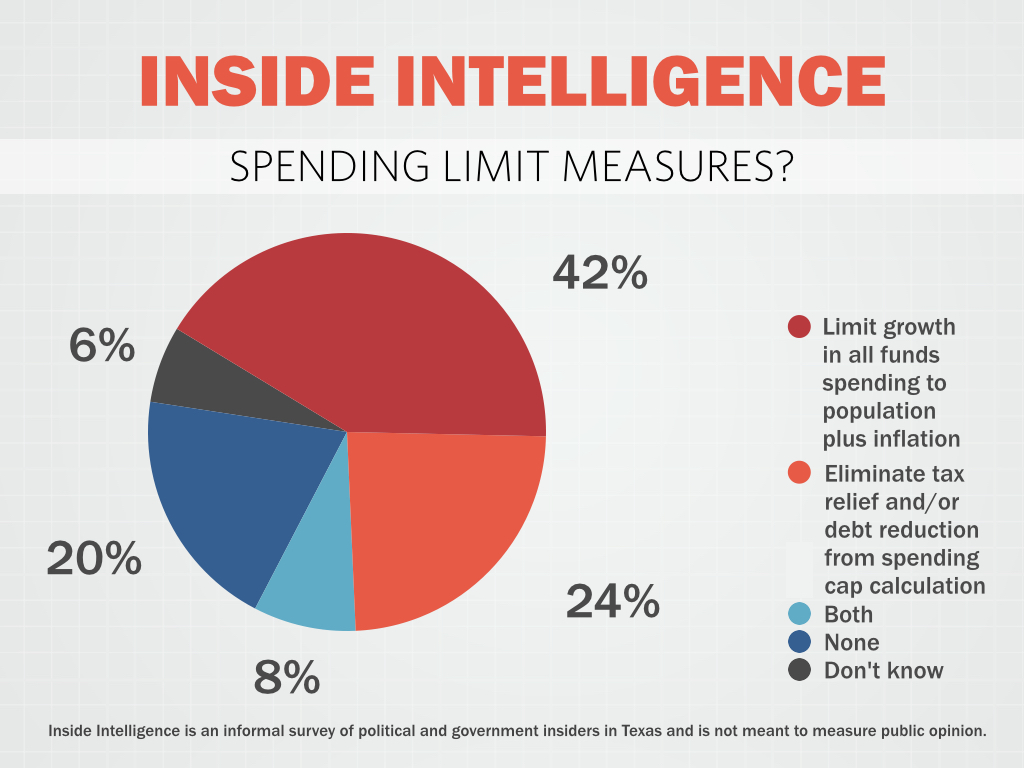 • "Doesn't seem like the House and Senate are singing from the same page in the hymnal, but that could change by Sine Die."

• "Patrick and Bettencourt have pushed the Senate into a corner where they now have to resort to accounting gimmicks that Texans hate. I'm using the word hate."

• "Getting two-thirds of both chambers to agree to change the constitution on something this controversial and partisan? Perish the thought."

• "Limiting growth in all funds would eliminate the advantage of dedicating the motor-vehicle sales tax and whatever else to the Highway Fund. The left hand and right hand need to communicate." 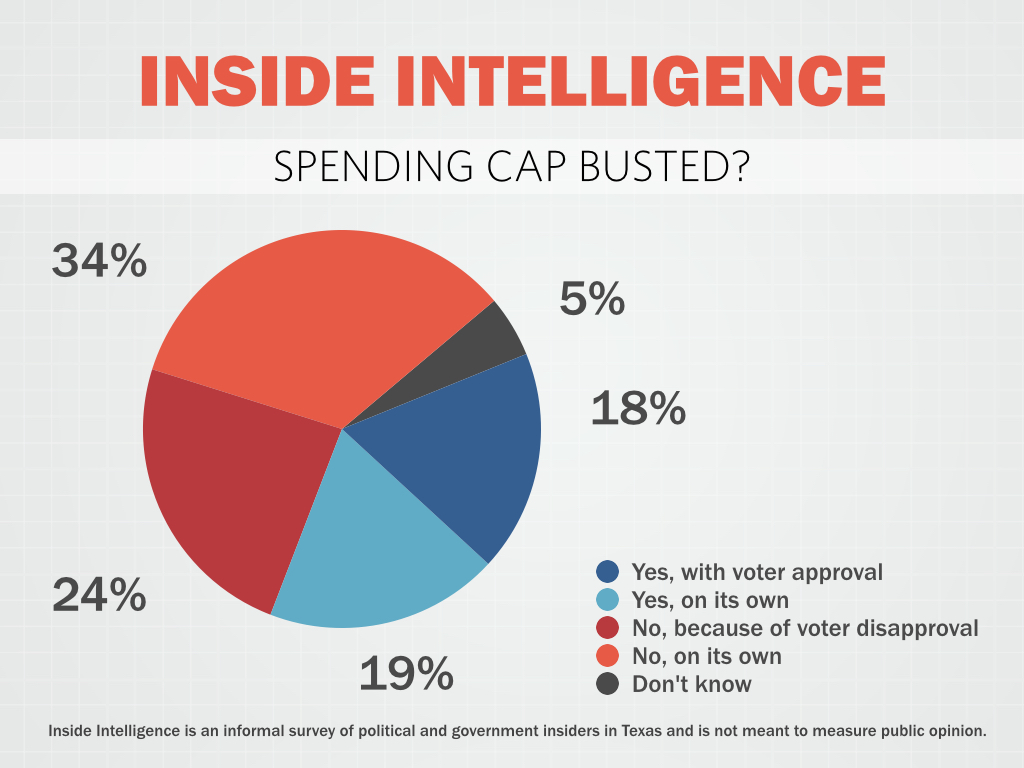 Will the Legislature bust the spending cap?

• "Not in the regular, but will have to do so in a Special that gets called after the Supreme Court rules."

• "They will adhere to the spending cap after they have removed from the cap additional revenues blessed by the voters as being constitutionally dedicated — roads, debt retirement."

• "IF they bust it, it will be based on putting something on the ballot. This Lege will never take a straight-up vote to bust the limit. Putting on the ballot allows them to look the other way and say it was the voice of the people."

• "Why even bother coming to Austin? Just let the voters decide everything. We could even do it online." 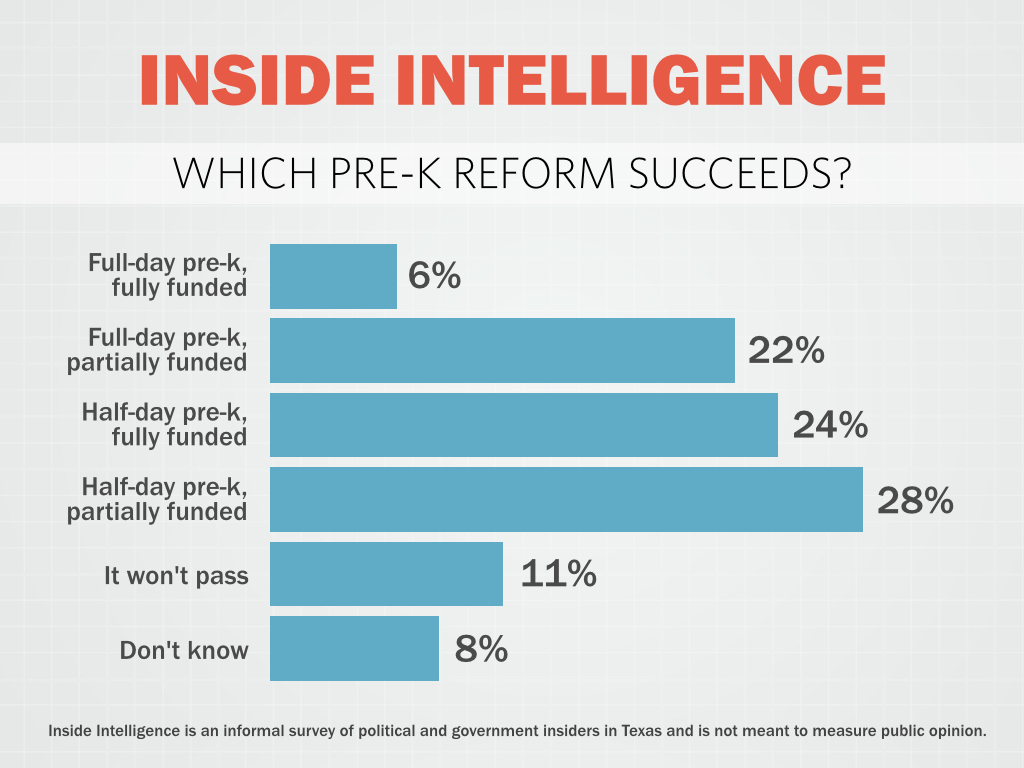 Pre-kindergarten legislation has been signaled as a priority issue for Gov. Greg Abbott. What form of pre-K legislation will lawmakers pass?

• "Which Pre-K bill are we discussing? The one the Legislature is likely to pass or the one Governor Abbott is likely to sign?"

• "Too bad his commitment to tax cuts and a more restrictive spending limit get in the way of an alleged priority. Cake/eating issue."

• "Only a tiny grant version with about $100 million, ensuring full-day pre-K for all schools is years away. (Can you name a recent grant that became a fully-funded program?)" 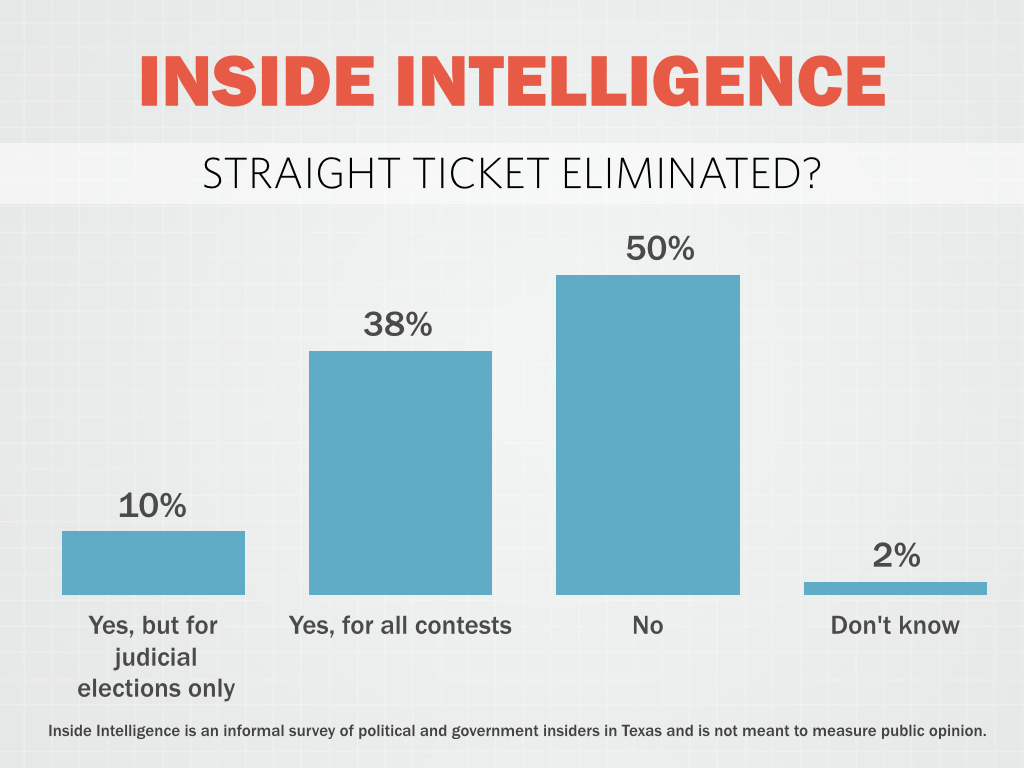 • "It should be banned. But, since in practice that proposal would dilute each district's R and D numbers — thus increasing number of competitive districts and uncertainty — it won’t be passed by this Legislature."

• "Straight ticket voting is the lazy way out. Voters should actually think? What a concept!"

• "Texas Democrats wish. White only lost to Perry by 250,000 with ticket splitters, but got crushed 7-to-1 in straight tickets. The built-in straight ticket advantage has vanquished many a Democratic judge in the last 20 years."