We started off this week’s survey of politics and government insiders with questions about what lawmakers might do on some pending policy questions and then asked about the likelihood of Gov. Greg Abbott using the veto pen. Spoiler alert! They think it's likely.

There's some strong debate right now about how much local control will be tolerated by conservative Republicans in the Legislature, especially when it comes to things like plastic bag bans. Two-thirds of the insiders, though, think that the Lege won't act to significantly curtail municipalities' authority to enact ordinances.

The question of Medicaid funding is something of a simmering issue but an important one for Texas hospitals. Despite significant cuts in reimbursements in recent years, more than 80 percent of the insiders don't think lawmakers will act to restore that funding source for hospitals.

Four in five, meanwhile, believe that Abbott will get legislation on his desk on pre-K, which he named a priority item. The insiders, though, differ on the final form of the legislation, which some said might not end up in the form most favored by Abbott.

The only split this week came on whether a sanctuary cities bill would make it to Abbott's desk. About one in three think the Legislature will deliver a bill, while a bit less than half think the effort will fail.

And fully three-fourths of the insiders think Abbott will be using his veto pen on legislation this session. 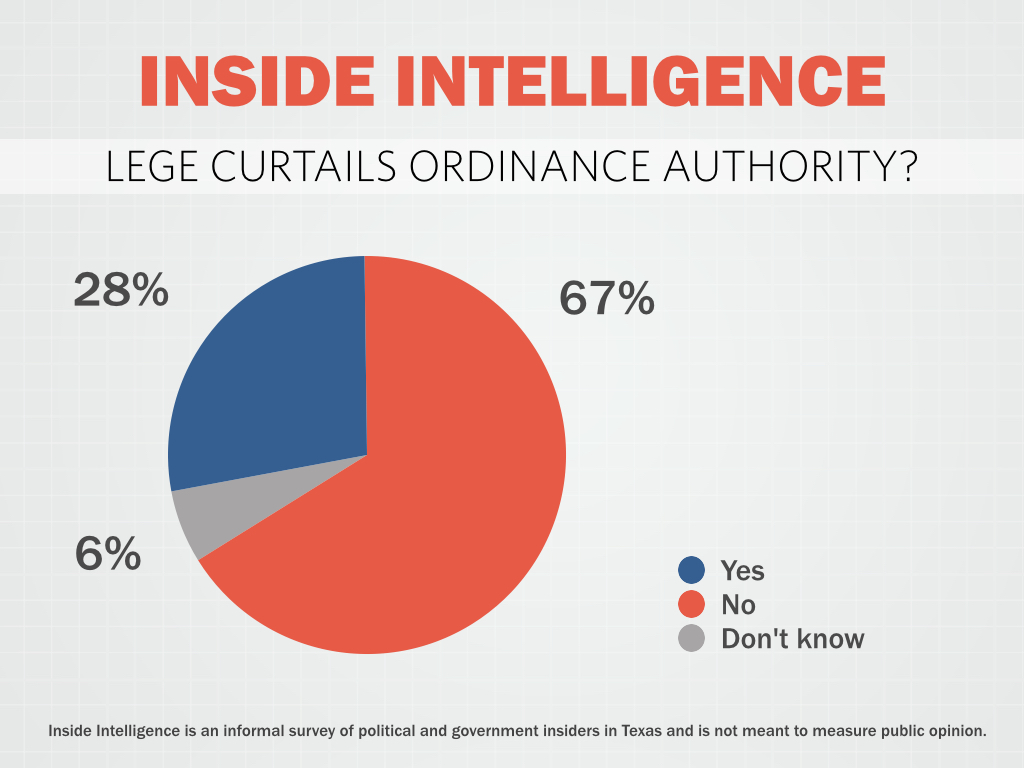 • "What you think about, 'significantly curtail,' depends on the subject matter of the bill, and whether municipalities should have been involved in the first place (e.g., bag bans, fracking, groundwater district authority, etc.)."

• "They will not curtail traditional ordinance authority as we historically know it. They will curtail the out-of-control local referenda that attempt to supersede state law and uniform state regulation."

• "Local control is still a popular concept, despite the hypocrisy of those who claim to favor government 'closest to the people' only when the people don't get out of line." 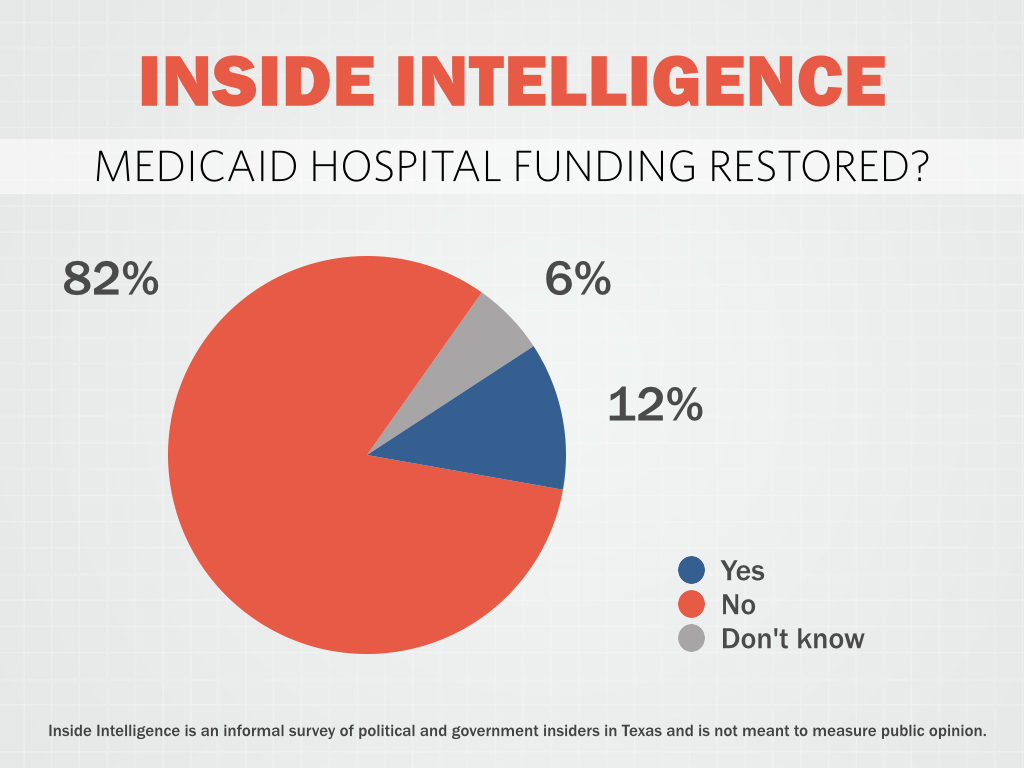 Medicaid reimbursement rates have been cut by 10 percent since 2011. Will this Legislature move to adequately fund Medicaid hospital payments?

• "Most in this Legislature think poor people brought it on themselves ... no need to enable bad behavior by lowering taxpayers share of uncovered health care..."

• "You can't expect doctors to work for free. It's got to stop."

• "It won't play well in Republican Primaries. No one feels sorry for hospitals."

• "They are paid adequately now. They get their 'uncompensated care' paid for by the rest of us. If they would cut the rates charged to the insurance companies or other paying patients in exchange for expansion, they might enlist some allies. No one who ever looked at a hospital bill believes they undercharge or are underpaid." 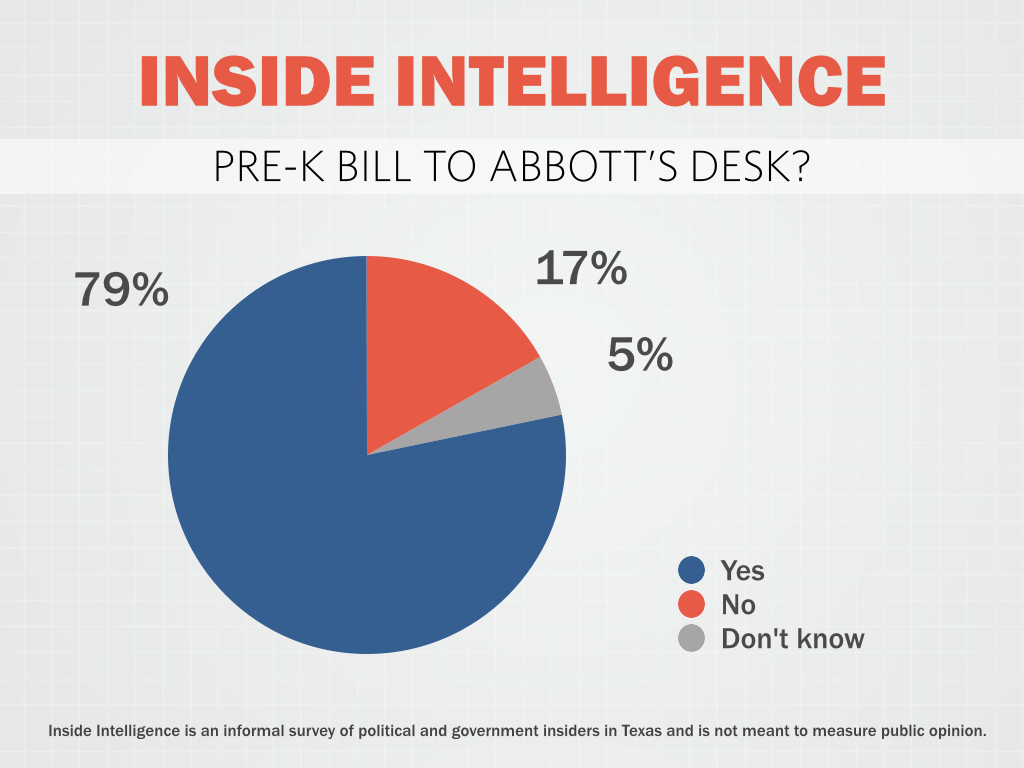 Will a pre-K bill make it to the governor’s desk?

• "Yea, but it'll be full of half-measures. Democrats and Republicans will fall over one another, congratulating themselves on 'fighting for Texas kids' while the can gets kicked further down the road."

• "If the Speaker plays his cards right, he'll get the bill there in exchange for a substantial school choice legislation deal with the Lt. Governor."

• "Greg Abbott is stealing the Democrats' playbook out from underneath them. Pre-K, community colleges, infrastructure." 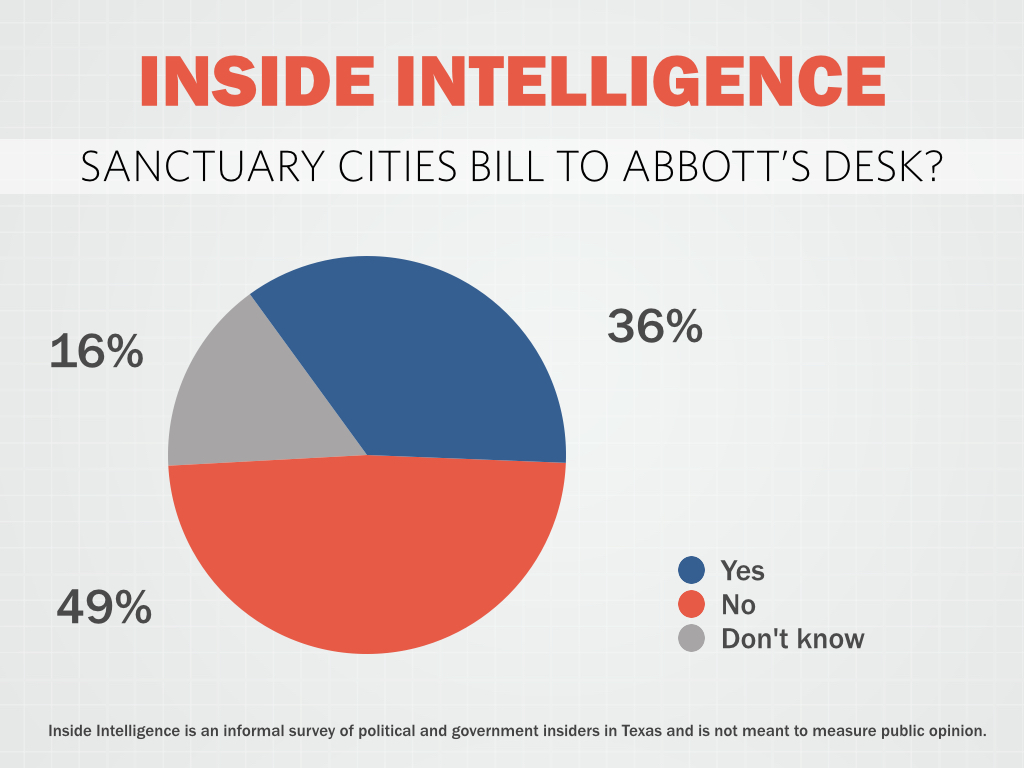 Will a sanctuary cities bill make it to the governor’s desk?

• "Any bill that manages to get out of the Senate will probably be referred to Criminal Jurisprudence (chaired by a Democrat), never to be seen again."

• "What's the pressing issue with this again?"

• "Again, municipalities have overreached.  Now it's time for the hand slapping."

• "It will fly out of the Senate eventually, but the House will likely hold its hearing too late. And, oh darn, we just ran out of time." 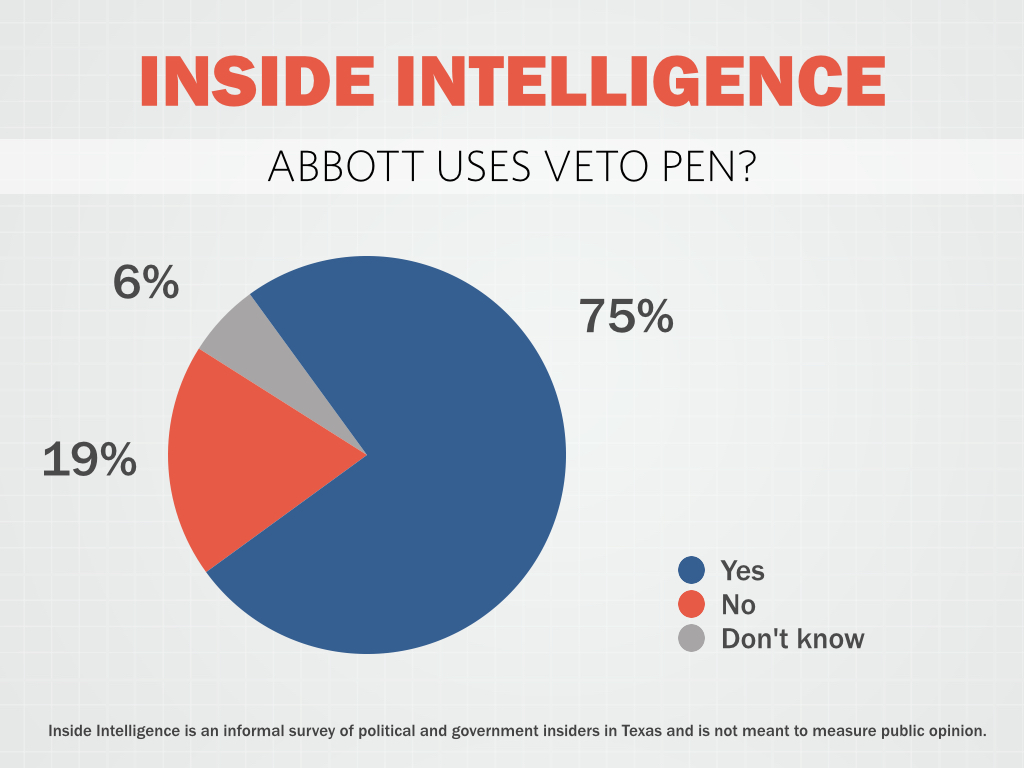 Will Gov. Greg Abbott have to use the veto pen this session?

• "You might as well ask if Governor Abbott will exercise 1 of his 2 powers (the other being appointments). Of course he will."

• "Budget - If the Legislature fails to adequately fund transportation and other infrastructure needs, as seems to have been promised in too many campaigns, then he must veto."

• "According to the LRL, in the past 50 years, Governors have vetoed on average 40 bills a session. So the better question is: what is the over/under?"