We started off this week’s survey of politics and government insiders with questions about the future of tax relief efforts in the Legislature. We also asked about a handful of high-profile conflicts between businesses.

A slight majority of our insiders believed tax relief passed this session would survive a future effort to fashion a school funding fix. Nearly two in five, though, thought it wouldn't.

Meanwhile, the insiders were nearly evenly split on whether lawmakers would throttle back on tax relief to provide funding for other priorities, such as debt reduction or catching up on deferred maintenance at state buildings. Forty-five percent predicted moving some money away from tax relief, while 46 percent said such a diversion wouldn't happen.

On the business-to-business questions, the insiders sided with established interests in two of the three conflicts.

Nearly half thought that the liquor stores would prevail in Wal-Mart's attempts to change the law to allow the retail giant to sell liquor. And nearly 60 percent thought the auto dealers would prevent Tesla's efforts to make it easier to sell their cars outside the current dealer structure.

But nearly 60 percent thought that ride sharing companies Uber and Lyft would win in their showdown with cab companies to more freely operate in Texas. 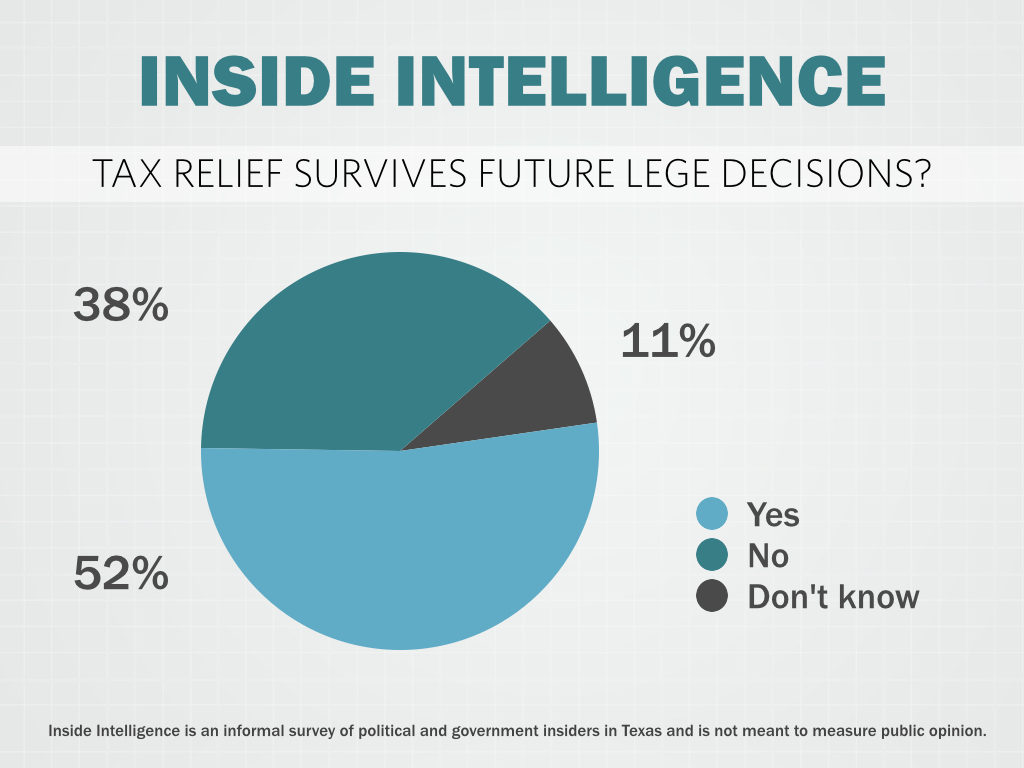 Will tax relief granted to businesses this session via changes to the margins tax survive a future public school funding fix?

• "Probably, but here's a better question: 1) will tax relief granted to property owners this session be noticed by property owners, and 2) will that relief survive a future public school funding fix?"

• "If they need more money to satisfy the Supreme Court, watch for a sales tax increase."

• "You're assuming that tax changes will actually pass. The two chambers are miles apart on this. Only Abbott might be able to pull them together."

• "Tax cut won't survive, but it's like Vitamin B shot that'll help keep the patient, whose economy is getting hammered with energy shutdowns, healthy." 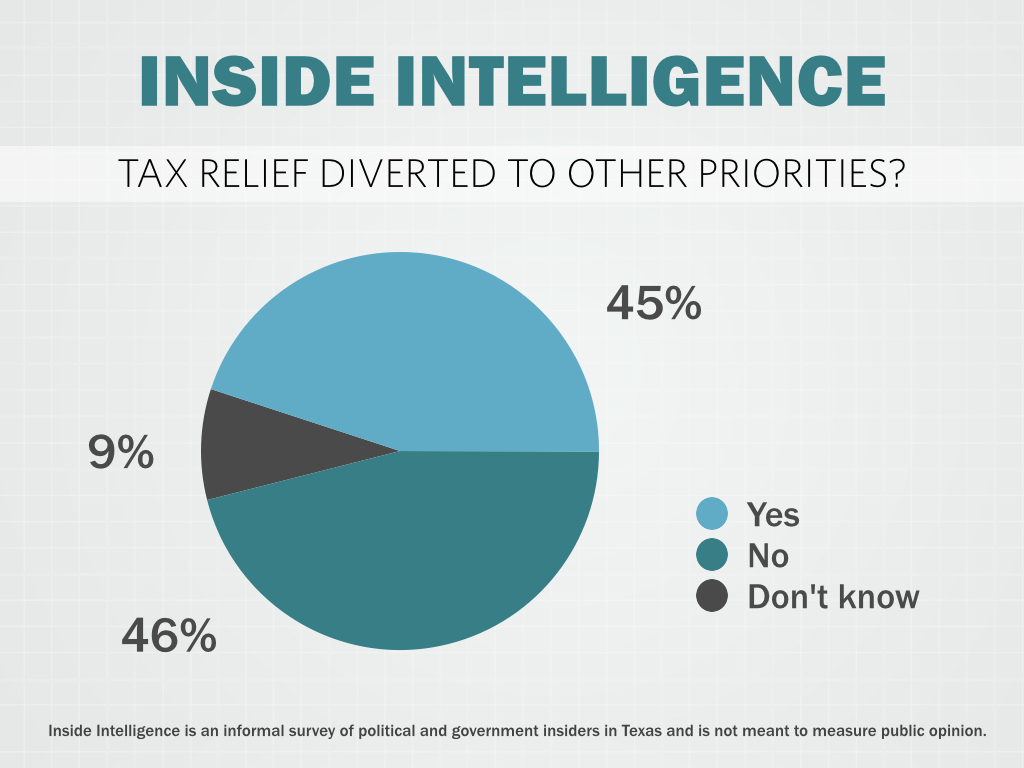 Will lawmakers scale back on tax relief to address lowering the state’s debt burden or catch up on deferred maintenance on state buildings and other infrastructure?

• "Members will want to claim they lowered taxes. Debt and deferred maintenance are out of sight and therefore out of mind for most."

• "This isn't a tough decision - school children shouldn't be exposed to rodents, and drivers shouldn't fear traveling over bridges. The fiscal conservative moniker is tired and poorly applied."

• "They will maneuver so that the cost of the tax cuts don't count against the spending limit, then do little or nothing on catching up - except maybe a bit for paying off debt and starting to deal with pension costs."

• "A state employee had to get a rabies shot because she was bitten by at bat at WORK? We MUST catch up on our maintenance!" 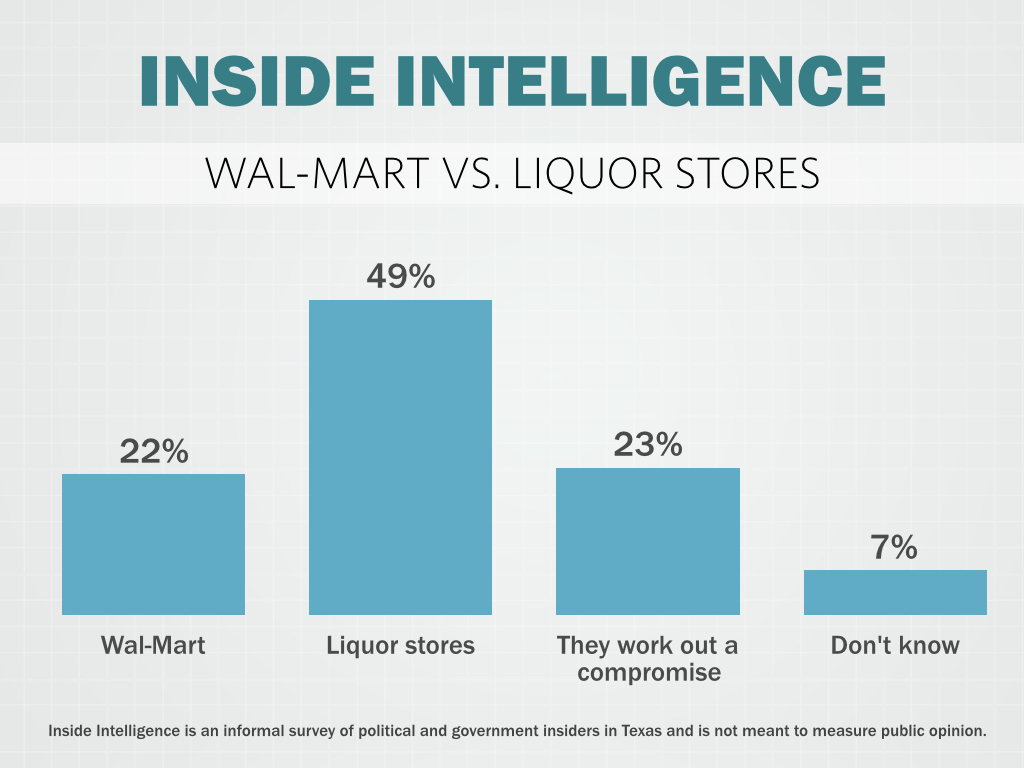 Who wins in the Capitol showdown between Wal-Mart and existing liquor stores?

• "The liquor stores win this round, but their prospects in the long run are bleak."

• "Hard to say. Unlike the car dealers, the liquor industry distribution has become so concentrated in just a few hands they do not have the constituent muscle of previous legislative fights."

• "Would appear that Wal-Mart's filing of a constitutional attack on the law in federal court pretty much amounts too a waving a legislative white flag. Can't imagine how they could seriously pursue a bill while that lawsuit is pending."

• "Liquor store, my friend. All politics is local. Crude analogy, but think of them like school boards. Everyone goes to the liquor store. Yes, even, wait, especially the Baptists." 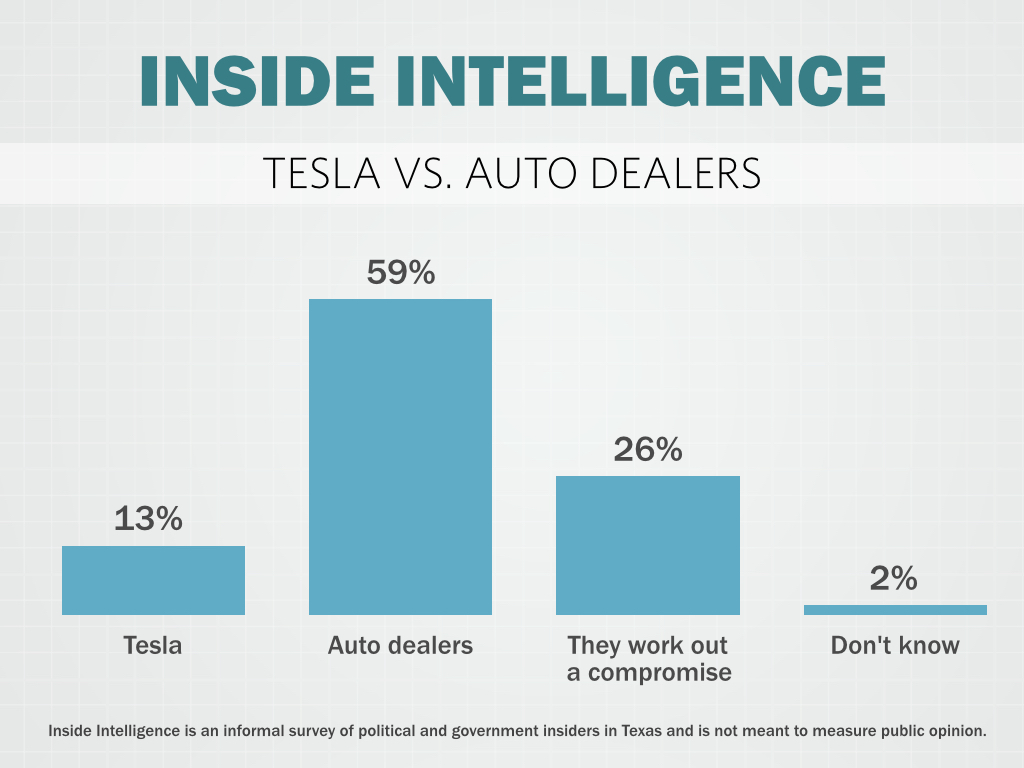 Who wins in the Capitol showdown between Tesla and the auto dealers?

• "100 years of car dealer community and political activism in communities all over the state trumps 'I want to sell my $200,000 cars differently from everybody else.'"

• "They might work out a compromise, but it won't happen this session. Auto dealers have the clout and legislative know-how to stop it today. But eventually..."

• "Not even a fight. Every member of the Lege has multiple car dealer supporters/constituents that have helped them win elections. A carpetbagger from California doesn't stand a chance."

• "The dealers have lost their clout. Tesla is in the midst of a classic capitalist process of market disruption just like Uber and others." 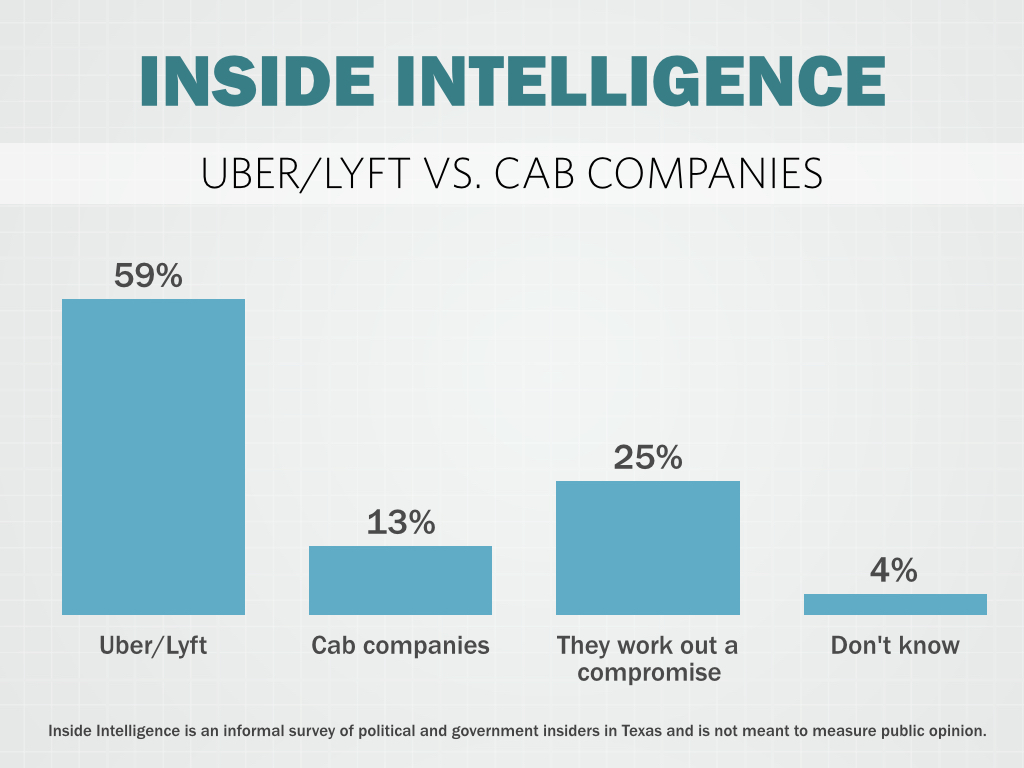 Who wins in the Capitol showdown between Uber/Lyft and the cab companies?

• "This is about FREEDOM! That's what members will say, anyway."

• "Can't stop progress; you can only slow it down. Ultimately, the future always arrives."

• "All of these issues relate to free enterprise. It will be interesting to see if the 'conservative' legislator is really committed to capitalism or preserving and protecting out-of-date statutes that limit business growth."

• "The turd in the punchbowl will be insurance companies who won't pay out when you have an accident and they learn that 'Uber' drivers used a personal vehicle for a business venture."

Disclosure: Tesla, Wal-Mart and Uber are corporate sponsors of The Texas Tribune. A complete list of Tribune donors and sponsors can be viewed here.