After Rick Perry won an upset race for agriculture commissioner in 1990, he needed a flashy issue — something that would bring him a little notoriety, get him out on the road.

He found a perfect match with Make It Texas, an ambitious program designed to create tens of thousands of agricultural processing jobs with government-backed loans. At a Make It Texas kick-off event in Abilene in 1991, part of a 12-city tour, the handsome, farm-raised Republican promised he would spread the word far and wide that “there is a government agency that is ready to go out and make things happen in processing in this state.”

It was the beginning of a career-long love affair with government subsidies and incentives. But the economic development programs Perry championed in Texas — tagged as “corporate welfare” by critics — have rarely lived up to their promise.

Within a few years of its launch, Make It Texas was racking up big losses and ultimately needed a $15 million taxpayer bailout. More recently, the subsidy programs he championed as Texas governor have been the subject of damning audits, charges of political favoritism and questionable economic development claims.

And now that Perry is embarking on a widely expected second stab at the White House — and putting his record on job creation front and center — those controversies could come back to haunt him.

Two other Texas-bred presidential prospects, GOP Sens. Ted Cruz and Rand Paul, take a dim view of giving tax dollars to private companies, and both have opposed the reauthorization of the U.S. Export-Import Bank — something Perry supports. This issue has divided Republicans in Washington.

“Senator Rand Paul strongly believes that the government should not be in the business of picking winners and losers," said Paul spokesman Sergio Gor.

In Perry's old stomping grounds, meanwhile, the climate on tax incentives has shifted, as new Tea Party-backed legislators take on the GOP establishment and its traditional support for subsidizing private enterprise.

Firebrand Republican Konni Burton, who won a hard-fought race to replace Democrat Wendy Davis in the Texas Senate, said the more voters hear about the government subsidy programs, the less they like them.

“I’d like to see them all defunded. The government doesn’t need to be in the job of picking winners and losers in the marketplace. That’s for the market to decide,” Burton said. “When the public is educated on it and told about it, they don’t like it. … All of that will come to light no doubt in the whole [presidential] process.”

With Texas leading the nation in job creation in recent years, Perry has made economic development a signature issue both as governor and a presidential candidate — and all signs are pointing to another run. He has hired staff in first-test Iowa, announced an impressive list of potential donors and continues to maintain a heavy schedule of travel to the early presidential primary states.

But back home, Perry’s successor, Gov. Greg Abbott, has already taken steps to dismantle the Emerging Technology Fund. It was set up in 2005 to provide state venture capital to high-tech start-ups but has been plagued with bankruptcies and unfulfilled job-creation claims. But Abbott wants to keep the more prominent Texas Enterprise Fund, used to close high-profile deals like Toyota’s relocation of its North American headquarters to Texas.

A scathing audit late last year found that nearly half the money doled out by the Enterprise Fund — more than $200 million altogether — went to companies that never submitted formal applications. The review also found the state failed to collect money it was owed after projects faltered and took credit for jobs that were never created.

In his first address to the Texas Legislature, Abbott singled out the fund and said he would overhaul it to enhance transparency and ensure that when companies get money from it, “taxpayers must know that the decision was based only on merit.” It was a thinly veiled reference to accusations that Perry, through both the Enterprise Fund and the tech fund, has rewarded contributors with taxpayer-funded grants. Perry aides always said there was no connection between contributions he got and grants that were awarded.

Perry has taken a hands-off approach to the retooling of his pet programs in the Texas Legislature, saying he supports periodic reviews of the funds while giving his successor wide latitude to set his own agenda. But in a recent interview with The Washington Post and The Texas Tribune, the former Texas governor defended the two main programs.

“I do think that the Emerging [Technology] Fund and the Enterprise Fund were very, very useful in helping create the environment in the state of Texas that led the nation in job creation,” Perry said. “During my entire tenure as governor, almost a third of all the jobs created in America were created in the state of Texas. I think those programs were a tool that allowed us to be competitive out there in a very competitive world, if you will.”

The fate of those two funds won’t be clear until the Legislature has its say during the current session. And even if the Emerging Technology Fund is abolished as Abbott wants, the value of the state’s equity stake in the dozens of companies it has sunk money into remains an open question.

According to the ETF’s 2014 annual report, 23 of the 144 companies to which the state provided commercialization incentives, about 16 percent, have “ceased operations.” Not long after the report went online, another ETF-backed company, Austin-based Image Trends Inc., entered involuntary bankruptcy — a case that features a former CEO who is in prison on child pornography charges, a Hollywood producer and the son of a Texas oil billionaire, according to the Austin American-Statesman.

Even if the company and its job creation promises can be saved, “Texas taxpayers are unlikely see the return of their original $1 million loan, plus $400,000 in interest, that is unsecured,” the newspaper report said.

If the past is any guide, there could be more failures. The mini-narratives on the list of shuttered tech companies compiled by the state sound eerily similar to the descriptions of failed agricultural ventures in Perry’s Make It Texas program, administered by the Texas Agricultural Finance Authority, or TAFA. Banks lent the money to the producers, but TAFA guaranteed the debt — obligations the state had to assume if the companies couldn't pay. 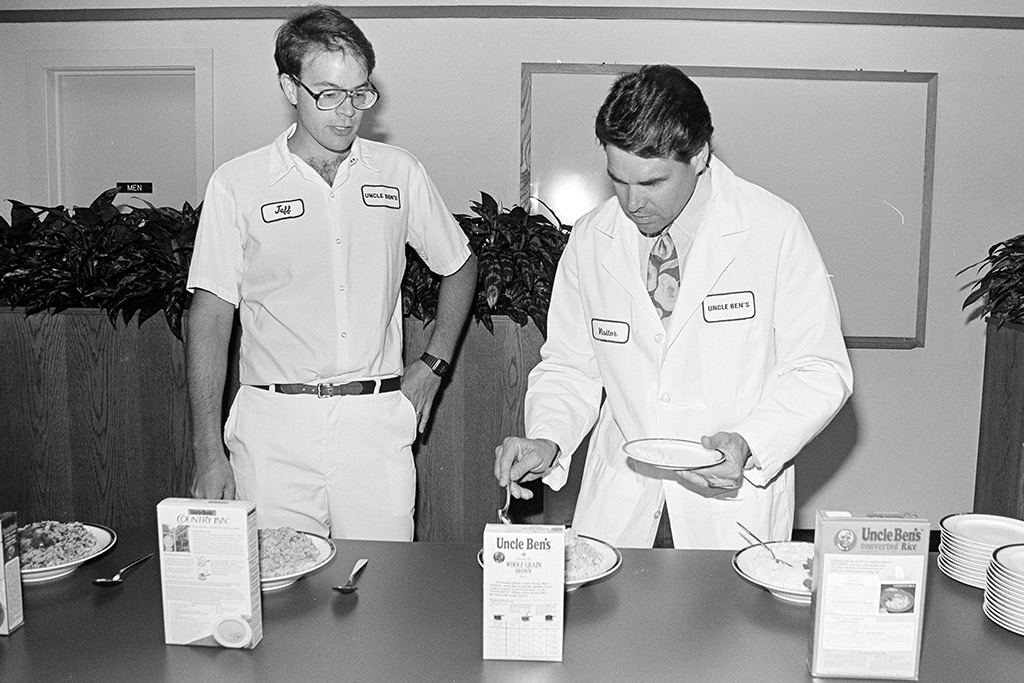 Just a few years into the program, more than a third of the guaranteed loans were past due or in default, according to TAFA’s 1997 annual report.

In one notable failure, the state backed a half-million dollars worth of loans to “The Living Christmas Tree Inc.,” a company that promised to market potted Afghan pine trees that could be planted after the holiday season ended. The company and its CEO went bankrupt within two years.

Also on Perry’s watch: State authorities signed off on $480,000 in loans to a company promising to build pre-fabricated walls from wheat straw; backed $2.2 million for a rural co-op hawking powdered refried bean mix; and guaranteed $1.2 million in loans to a sheep producer that wanted to make lamb cuts that could be marketed like “consumer friendly” chicken. All of them defaulted, the records show.

As reports of the audits and trail of bad loans started hitting the newspapers, Perry pushed back against the negative publicity and blamed TAFA board members for making bad decisions early in the program.

“This partnership has worked to keep value-added processing opportunities and jobs here at home,” Perry wrote in a 1998 column circulated to Texas newspapers. “No taxpayer money has ever been used to make TAFA loans.” He said improvements to the loan-vetting procedures would put the job-creation program back on solid footing.

Less than a year later, Perry was elected lieutenant governor and on his way out of the Department of Agriculture, but the debts kept growing. In a follow-up review in 1999, State Auditor Lawrence Alwin warned that a taxpayer bailout might be needed.

“Because it provides loans that otherwise would not be made, the Authority has had difficulty attracting good loans to act as a buffer against its riskier loans,” Alwin said.

He was proved right in 2002 when Perry’s successor, facing $14.7 million in losses, suspended new loans. For a few years the authority paid the interest on bad loans with proceeds from the good ones, but in 2009, Agriculture Commissioner Todd Staples told the Austin American-Statesman he “hit a wall” and had to ask for a bailout, which Perry approved by signing the state budget that year. The Legislature also authorized a heavily restructured and limited version of the TAFA loan guarantee program.

When he was running for president, Perry was asked about the program’s collapse and resulting bailout during a Fox News debate in December 2011. The governor denied that the program required a taxpayer bailout, but PolitiFact Texas determined the economic development initiative indeed triggered a $14.7 million bailout and it gave Perry a “Pants On Fire” rating in a fact check.

“Paired with Texas’ strong economic climate, incentives are a competitive tool that helps attract jobs and investment to the state,” she said.

Abby Livingston contributed to this report.