We started off this week’s survey of politics and government insiders with questions about the agenda proposed by Gov. Greg Abbott in his first State of the State address.

Abbott laid out five emergency items in his speech. Transportation and border security funding were each named by four of five of our insiders as likely to make it to the governor's desk. Early education was chosen by 40 percent, followed by ethics reform (36 percent) and higher education research (32 percent).

About 70 percent didn't think the Legislature would give Abbott the $500 million he was asking to lure Nobel laureates to Texas universities. But 85 percent thought lawmakers would give Abbott money for adding 500 troopers for border security duty.

As to the prognosis for other non-emergency items touted by Abbott, two-thirds of the insiders said the call to make it easier for veterans to re-enter the workforce would receive a good response from lawmakers. About half saw success for the proposed $4 billion in tax relief. Nearly 40 percent thought lawmakers would move on agency budget cuts.

Three in 10 saw success for a constitutional amendment limiting the growth of government spending, while a quarter believed school districts would be made whole for tax revenue lost to tax relief. 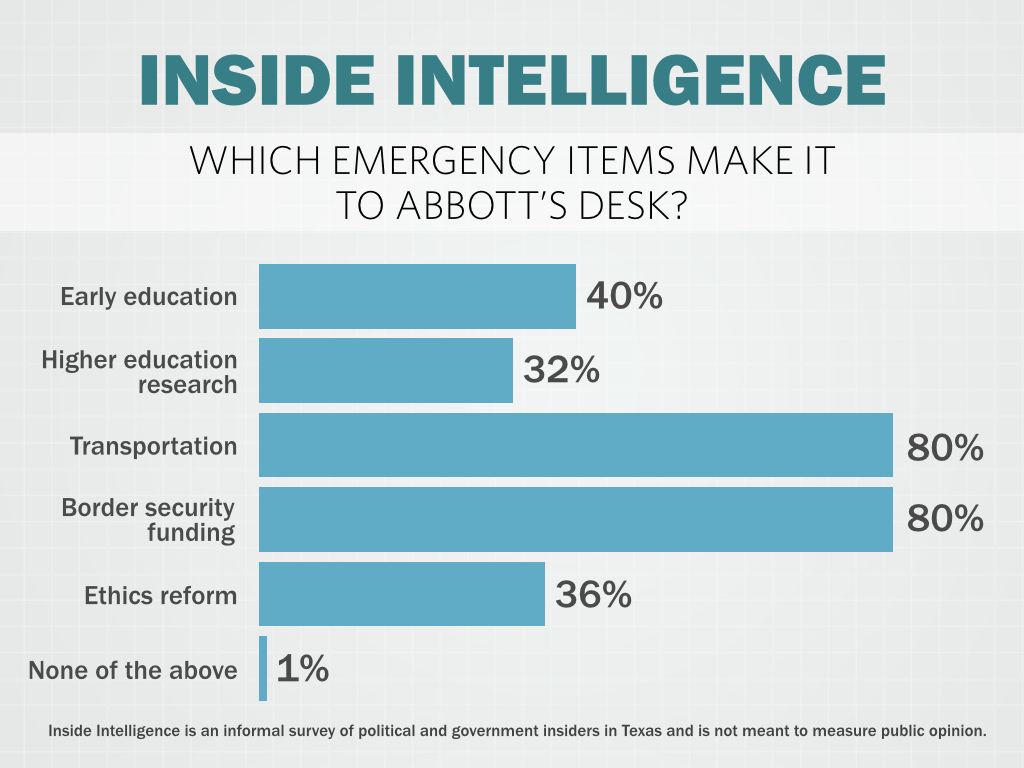 Gov. Greg Abbott named five emergency items in his State of the State address. Which topics will generate legislation that makes it to the governor’s desk?

• "Members may try to make the lobby more ethical, but rest assured they will pass nothing that in any way makes any of their information public..."

• "Bravo to Governor Abbott for tackling early education. This won't be popular in this legislature and while likely not to pass this session, will start an important conversation."

• "I hope NOT early education because it's been an abysmal failure and very expensive for taxpayers."

• "Problem is that they are all big topics. Surely something will make it through the system. Ethics, interestingly is the most undefined one, so almost anything can count towards victory unless the Gov gets specific..." 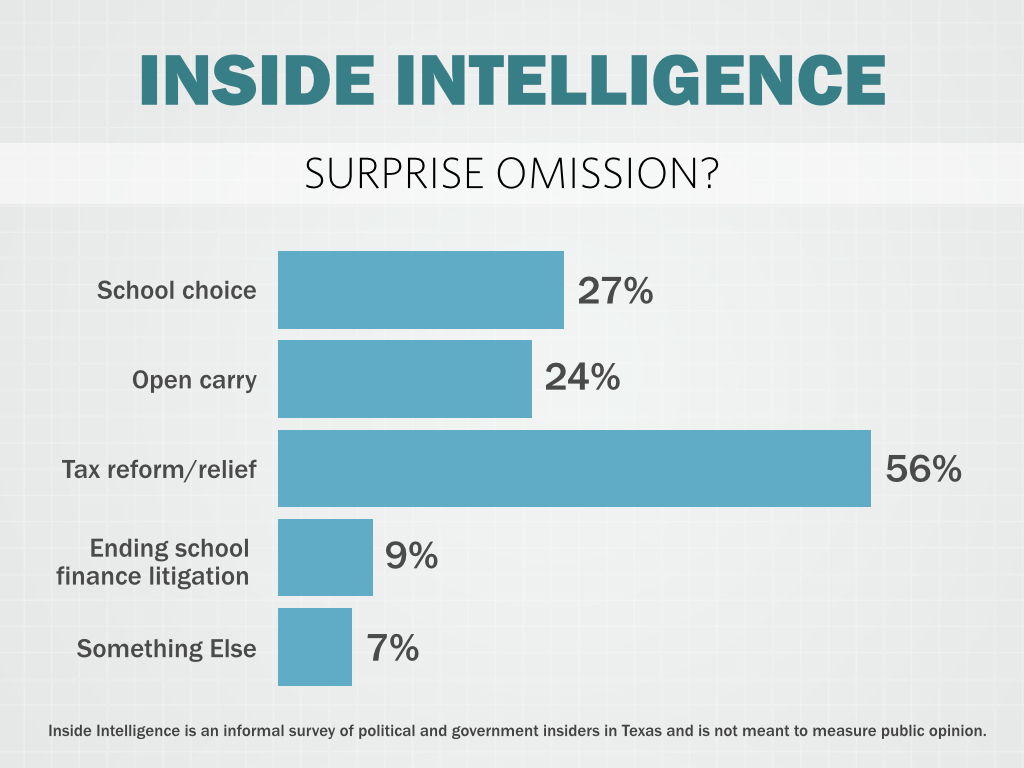 •"Tax reform/relief was clearly part of the agenda — it's safe to assume he means all the emergency items to be taken care of in the context of tax relief, with no new revenue identified to support them."

• "Hard to tell whether the Big 3 see eye-to-eye on these.  Also, school finance and tax reform/relief will generate LOTS of debate because the devil's in the details. Because of that, they cannot be on the fast track."

• "Open carry is ready to pass the Senate.  Abbott could have started with a slam-dunk."

• "Where is water? Water is more important than transpo. When will our leaders in gument figure it out? Sure we got some money for it and we have sort of a plan. Not enough, my friend. Maybe we should move session to the summer months.  That might make it resonate. Duh!" 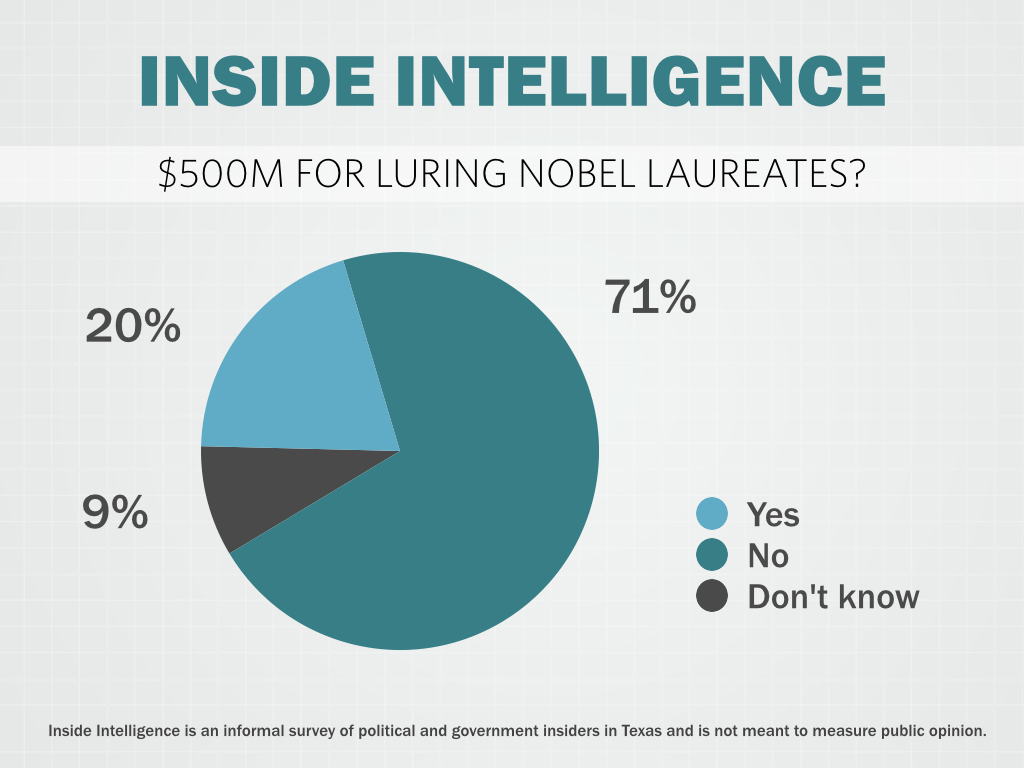 Will the Legislature give Abbott $500 million for Texas universities to attract Nobel laureates?

• "Unless this plan comes with an indentured servitude agreement to keep these geniuses in Texas after the grant money runs dry, what is the point?"

• "Sure... but they probably won't give him a nickel for rank and file faculty, who do most of the actual teaching."

• "Why would a Nobel laureate come to a University where the students are armed?"

• "Eggheads aren't as valued as in years past." 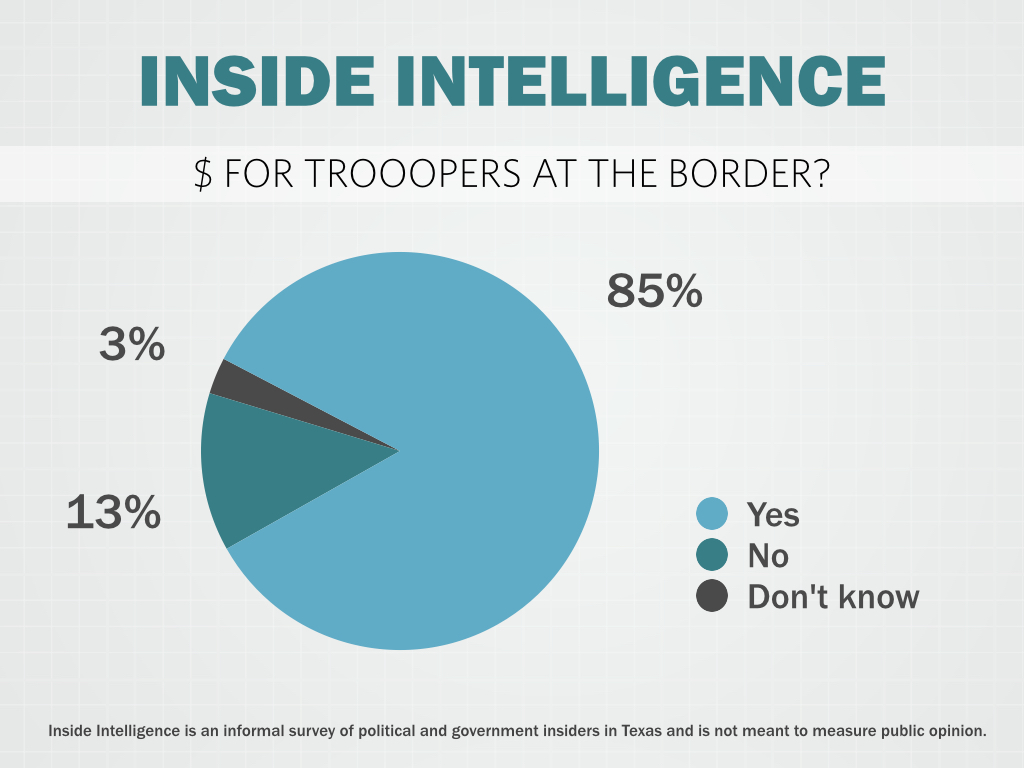 Will the Legislature approve funding for the 500 troopers requested by Abbott for border security?

• "Governor Abbott's trooper proposal is an acknowledgement that Texas-funded border security is a long-term reality. The Feds will continue to be completely absent on this issue."

• "Not as many as 500, maybe half, but there will be more troopers assigned for border security. DPS troopers substituting for National Guard is an issue that will have sparks flying between leadership and some in the House (though small) advocating more severe actions."

• "Recruiting, training, and keeping those additional troopers will be harder than securing the funding for them."

• "Give primary voters what they want!" 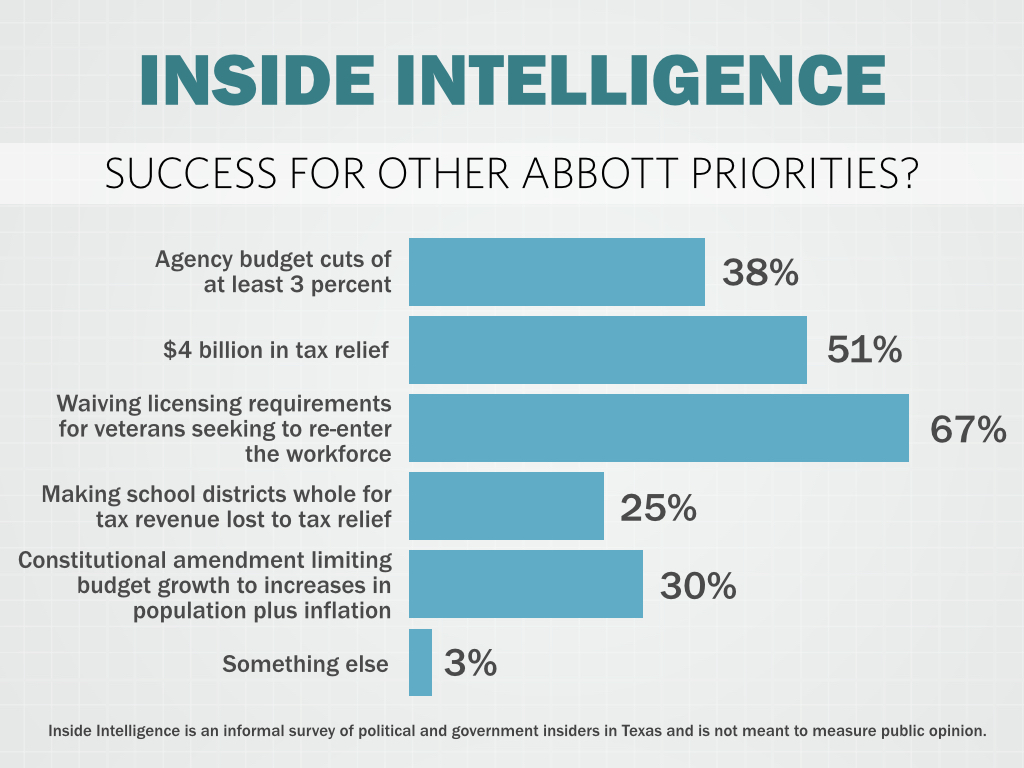 What other requests in the State of the State address are likely to pass the Legislature?

• "Another 'tax relief' session! It never has worked and it never will ... will give MQS and right-wingers something to check off on their lists. It appears Republicans are growing fond of debt and debt service."

• "In Texas specifically, efforts targeted to veterans is always going to garner support from all corners of the Dome, as it should."

• "$4 billion in tax cuts is too much for the House to swallow. My guess is a larger homestead exemption, with enough state money to keep the schools from losing, plus some small franchise gift."