A private company’s plan to build a high-speed rail line connecting Dallas and Houston came further into focus Tuesday as the company announced its preferred route for the multibillion-dollar project.

Texas Central Railway said it has informed the Federal Railroad Administration that it prefers to build tracks dedicated to the project along land reserved for high-voltage electric transmission lines, a route that the company had dubbed the “Utility Corridor.”

In a news release, the company called the Utility Corridor the “superior alternative" to a second route that hewed closely to existing right-of-way owned by BNSF Railway, a national freight rail company based in Fort Worth. Texas Central officials had previously said that route would only work if the company could come to an agreement with BNSF. A request to BNSF was not immediately returned Tuesday.

Texas Central is working with a Japanese train manufacturer and operator to debut the company's bullet train technology in Texas and cut the travel time between Houston and Dallas to 90 minutes. If the project moves forward, J.R. Central would sell its trains to the company and play an advisory role on the system’s operations. Texas Central officials have said they hope to begin operations by 2021 and plan to do so without U.S. subsidies.

The federal government, which must approve any new passenger rail system, is in the middle of an environmental impact study of the project, which is being paid for by Texas Central. Federal officials originally studied nine possible routes between Houston and Dallas. By October, that list had been narrowed down to the two that were believed to best minimize the impact on the environment and property owners — the utility route and the BNSF route.

Both routes traveled between Dallas and Harris counties by crossing parts of Ellis, Navarro, Freestone, Leon, Madison and Grimes counties. The utility route also crosses into Waller and Limestone counties. 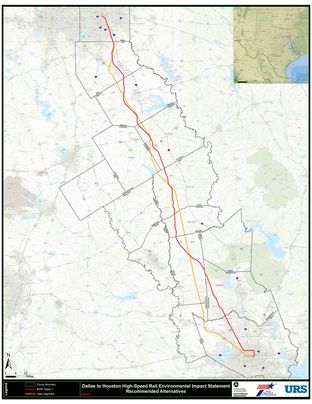 Since the two routes were unveiled in the fall, local officials and property owners in the rural counties along them have expressed concerns about how a bullet train line would affect their quality of life as well as local businesses and property values.

A Texas Central official said in October the utility route would impact fewer private property owners than the BNSF line.

“What you do find around high-voltage electric transmission lines is density is very low because of people’s concerns with regard to living near electromagnetic fields,” said Shaun McCabe, Texas Central’s vice president of environmental and engineering.

Along with clarifying its proposed bullet train's route, Texas Central has also provided more details about what the system will look like around Houston and Dallas. On the Houston end, the company said Tuesday it is recommending that federal officials consider both the utility corridor’s route into Houston’s city limits through some residential areas, as well as along the Interstate 10 corridor, an alternative championed by Houston Mayor Annise Parker.

“Today’s announcement indicates a clear commitment to develop the project in a way that is sensitive to the voices of our communities, and it gives me confidence that my request that the I-10 corridor be considered as a route for high-speed rail into Houston will receive a thorough review,” Parker said in a statement.

Earlier this month, Texas Central announced it had narrowed its options for a Dallas station to two, both of them just south of the Kay Bailey Hutchison Convention Center near downtown. The news pleased officials in Dallas who had been urging the company to reject station locations outside of downtown.

"Texas Central has gone to great lengths to identify corridors that will have the least impact on local communities and meet our purpose and need,” Texas Central President Robert Eckels said in a statement.

Correction: An original version of this story misspelled the name of a Texas Central Railway official. He is Shaun McCabe, not Sean.

Disclosure: BNSF Railway is a corporate sponsor of The Texas Tribune. A complete list of Tribune donors and sponsors can be viewed here.