We started off this week’s survey of politics and government insiders with questions about who might benefit the most from the tax cuts that might come from this legislative session.

Nearly three in five said business owners would come out ahead on the apportioning of tax relief. About 30 percent believed residential property owners would be the winners. About one in eight took the pessimistic route, saying neither side would win.

Vaccinations are in the news with a measles outbreak prompting a national conversation on where parental rights end and governmental responsibility to maintain public health begins. Despite one state lawmaker filing legislation on the topic, two-thirds of the insiders this week said lawmakers would not make it more difficult for parents to opt out of vaccinating their children.

We also asked the insiders for their picks from a list of wild-card issues that could emerge from the session. Most thought medical marijuana was the mostly likely to break out, followed by vaccinations and water fights. Insiders also pointed to lobby spending on lawmaker meals and pension reform as other wild-card candidates.

We also asked what were the big surprises coming out of the House committee appointments and who were the biggest winners and losers. The changes at the top of some key committees, such as Insurance, got the attention of many of the insiders. 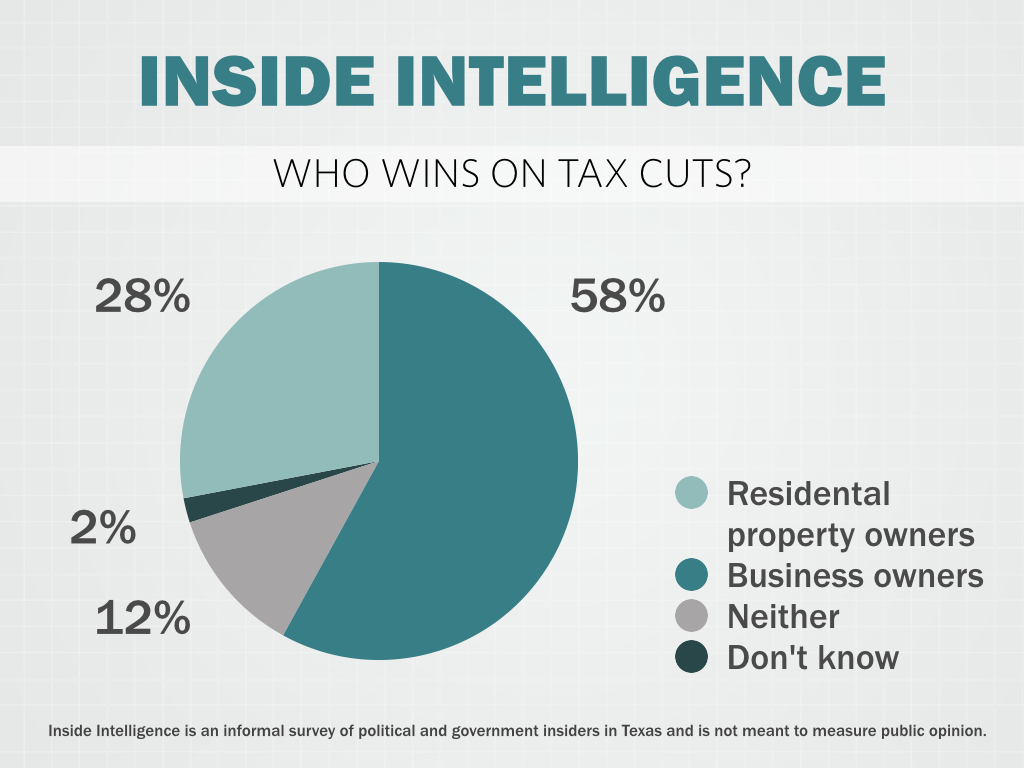 When the gavel falls on sine die, who will have gotten the better end of the deal on tax cuts?

• "First-year state officials know who brought them to the dance. They have to provide a victory for residential property owners."

• "The Legislature will give the greater tax cuts to those who have more votes. That will only exacerbate the disparity between businesses and homeowners, but what is new."

• "Business owners — because they have better lobbyists, duh."

• "Both groups will get some relief, but our commercial property taxes are so blooming high, any relief will be of more import to business owners." 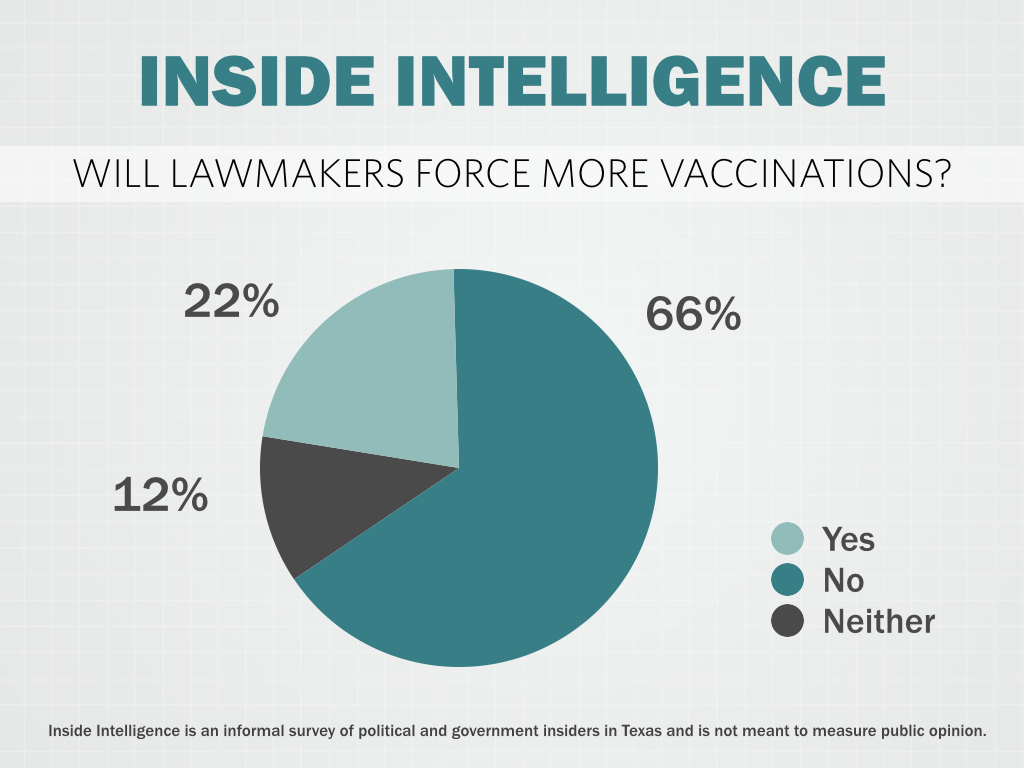 Will the Legislature make it more difficult for parents to exempt their children from being vaccinated?

• "Common sense will prevail on this issue: if you want to exercise the right not to vaccinate, you should not enjoy the benefit of public school enrollment."

• "We live in a state of Republican primaries where libertarians provide a healthy voter base. As dumb as this debate is, it is still a re-election issue."

• "The question that needs asking is, how many members haven't vaccinated their kids?"

• "Not when the counties registering the highest percentage of exemptions just happen to be in the districts of the committee chairs where those types of bills are usually referred." 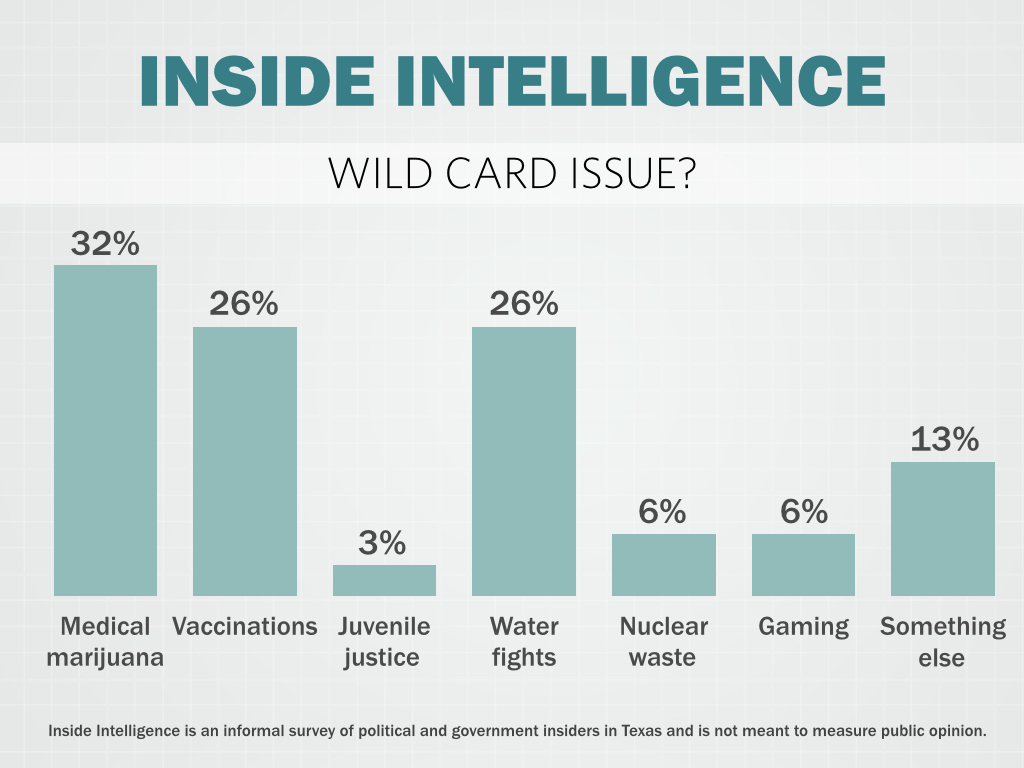 What could turn out to be the wild-card issue of the Legislature?

• "The lobbyist entertainment bill will provide an existential scare to those under the Pink Dome. We can only assume Geren was tasked with filing this bill to ensure it dies in committee."

• "The drought is not over and water is not a settled issue."

• "Pension reform for public safety workers. All five large cities want it and public safety unions have been making donations and endorsements over the past two years in preparation for this show down. It will draw thousands to the capitol and set off fierce, emotional debate."

• "Watch for a total derailment of the legislative process over vouchers."

• "Change can be good, but the loss of institutional knowledge is painful on some of these committees."

• "The biggest winner is the Democrat Party because it has once again proven its complete control over the Straus leadership team."