With 2016 presidential hopefuls already off and running in key early battleground states, we started off this week’s survey of politics and government insiders with questions about how they think the Texas-connected candidates will fare.

Rand Paul, son of longtime Texas Congressman Ron Paul, was named by 10 percent. Rick Perry was named by just 5 percent, a sign that he has yet to overcome insiders' skepticism about his ability to overcome his disastrous 2012 presidential campaign. Former Arkansas Gov. Mike Huckabee, who was in Austin on Thursday on a book tour promoting Bubba values, was named by just 2 percent.

The insiders were evenly split at 44 percent each on whether one of these Texas-flavored candidates will break through and win the Republican nomination. On the next question, we expanded the inquiry, asking whether a Texan would make the ticket of either party in 2016. Only 37 percent said yes, while half said no.

And the insiders don't seem to think the current indictments against Perry will, by themselves, sink his presidential hopes. Two in five think his hopes to win the White House are already torpedoed; half don't think the indictments on their own will ruin his chances. 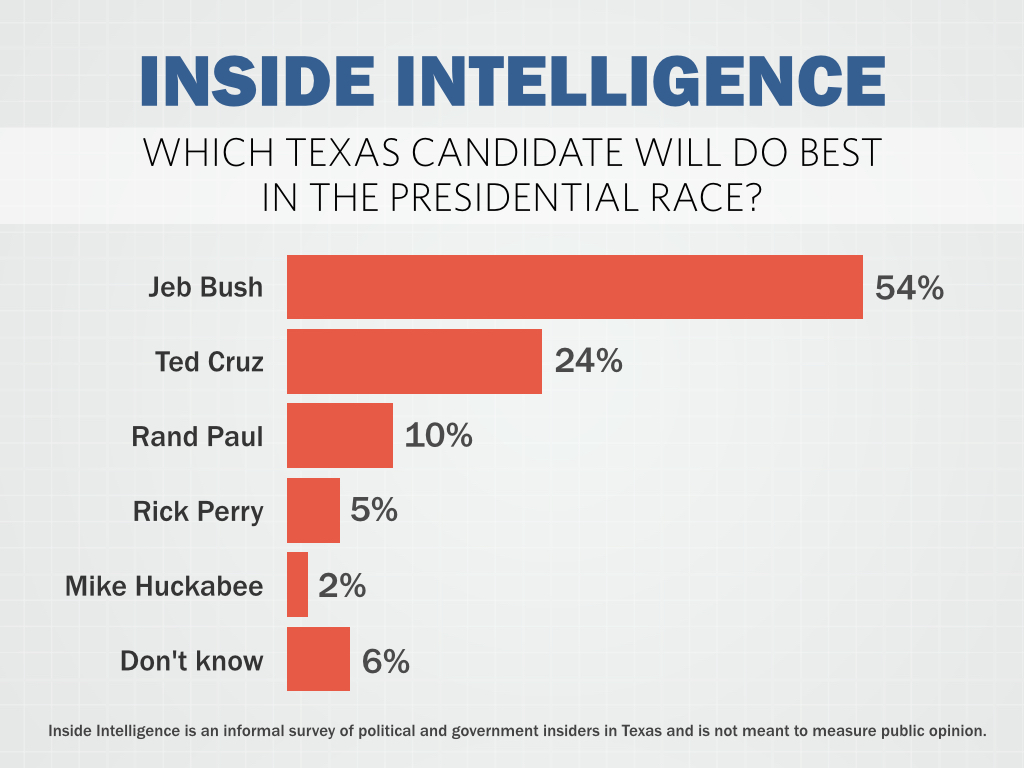 Which of these 2016 presidential candidate with Texas ties finishes highest in next year’s GOP primary?

• “Not sure who will finish highest ‑ maybe the one in favor of decriminalization of marijuana? Joking aside, Jeb will have the resources to go deepest into the primaries.”

• “Like the past 2 Texas gubernatorial campaigns, NEW MEDIA rules. And the Cruz campaign has the best.”

• “None of the above. Scott Walker will clean their clocks.”

• “It will come down to Jeb and Ted. The GOP will then be locked in battle between the money types and the foot soldiers. Do they really want to nominate a squishy ‘conservative’ again? Or do they want the real thing?” 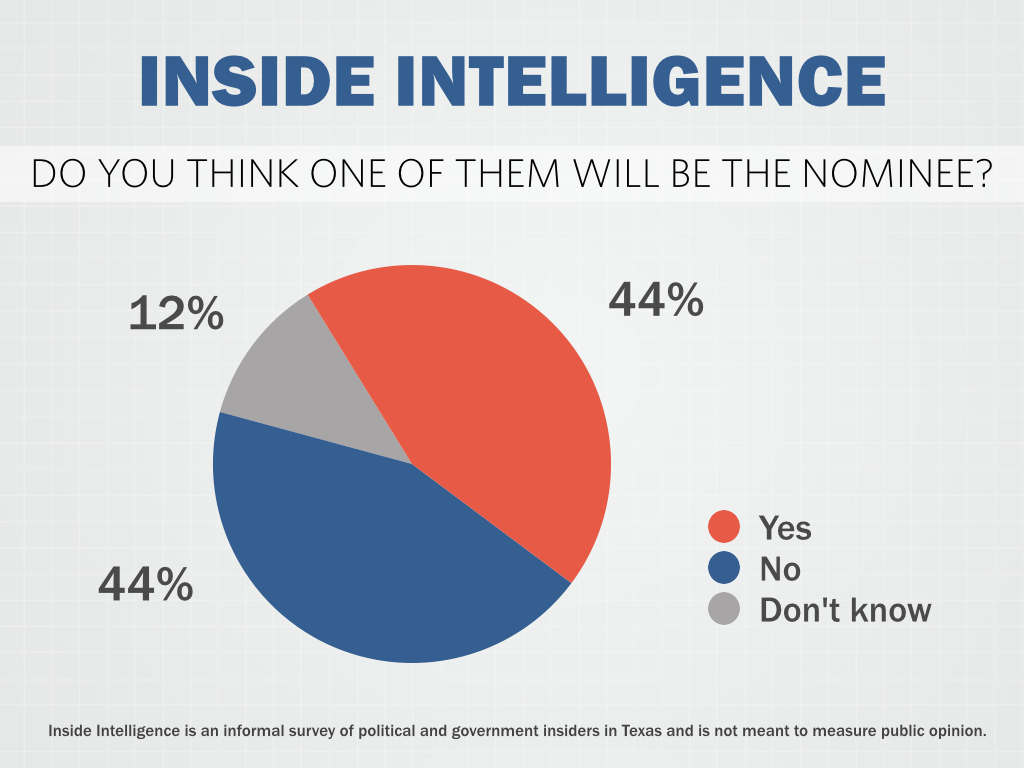 Do you think a Texas-connected candidate will be the nominee?

• “The top five finishers will probably include Paul, Bush and Cruz. Walker and Rubio are the other two who look strong now, but a longer shot could well emerge during the campaign.”

• “While WAY early, the smart money seems to be behind Jeb Bush . . . if he's indeed a ‘Texas-connected’ candidate. Unless completely neutered by the attacks from the right, he appears to have the upper hand.” 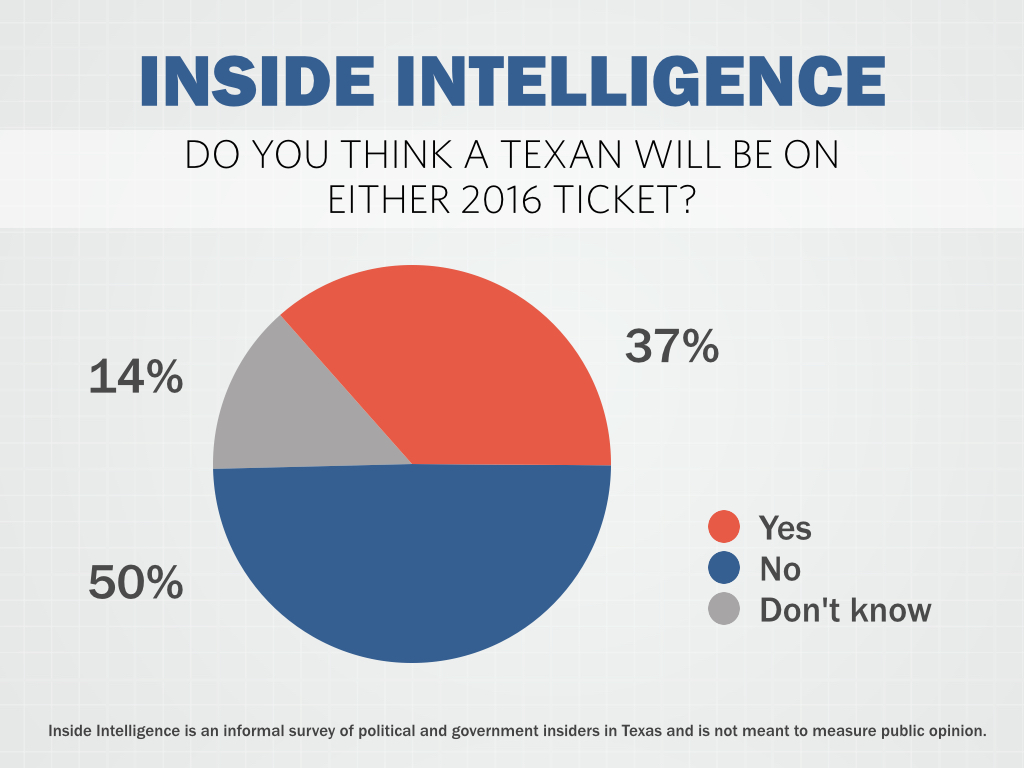 Do you think a Texas-connected candidate will be the vice presidential pick of either party?

• “If one of these is selected as the Veep candidate, it won't be for the traditional reason of bringing a big state (or region) into the fold, instead it will be to appeal a certain segment of the national populace based on ideology and principle.”

• “Hell NO. It will not be Ted, it will not be Rick and Jeb does not have a chance in hell. The base has not love for him and the Bush family. Maybe George P but none of the others. Maybe Susana Martinez for VEEP is as close as Texas gets.”

• “Clinton/Castro is the ticket. Don't we already have bumper stickers?”

• “Jimmy Fallon is hoping for Rick Perry to replace Biden.” 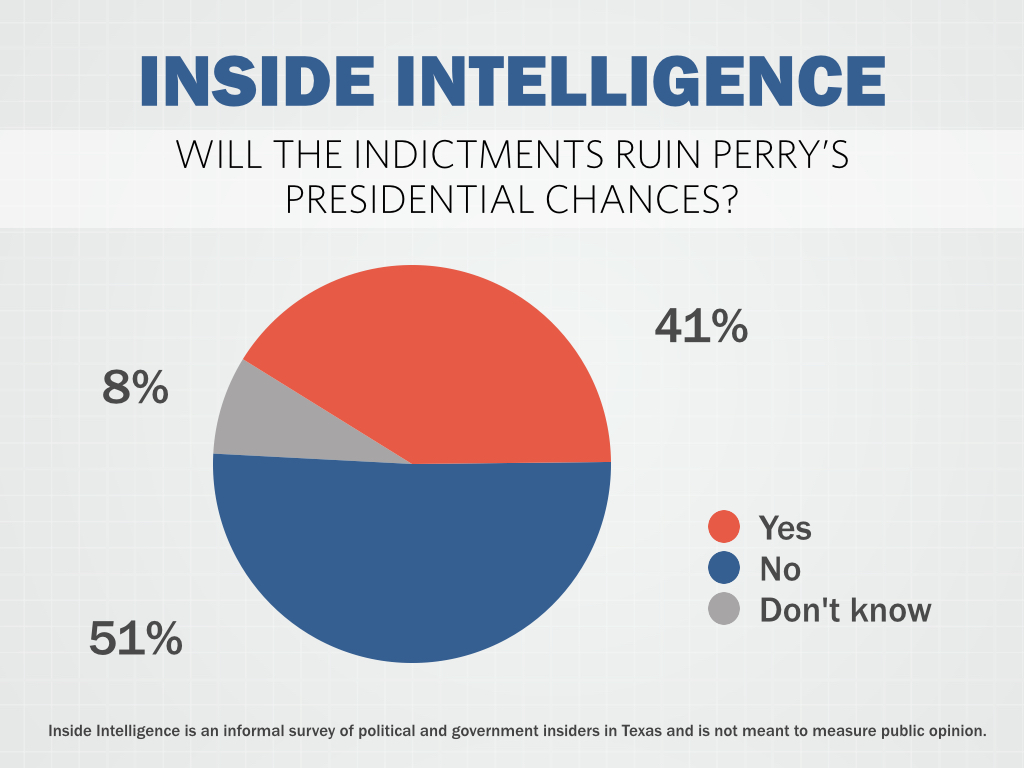 Regardless of the ultimate outcome, does the timing of the Travis County case against Rick Perry ruin his presidential chances this cycle?

• “To an extent until a verdict is reached in this case, it only fuels a fire for Perry and for Perry supporters. There will be a race to spin the ‘overzealous’ prosecution as liberal posturing and meddling, all of which help Perry fundraise and draw attention from folks across the country.  If the trial proceeds and starts to turn, there is a chance it would be enough to force Perry out. For now it’s beneficial to a large degree.”

• “It doesn't ruin his chances currently, but it is a cloud that will spit at him.”

• “What chances? He had none to begin with. He's angling for a cabinet appointment.”