BRENHAM — In Leon Toubin’s dreams, Jewish life would again be vibrant in this city where he and his wife, Mimi, care for the B’nai Abraham synagogue where generations of his family worshipped.

But Jews are not moving to Brenham, so Toubin has decided to cut B’nai Abraham’s roots so that it may bloom anew. He has arranged to move Texas' oldest orthodox synagogue 90 miles west to Austin, which does have a thriving Jewish community. The 121-year-old white wooden building could be trucked to the Dell Jewish Community Campus in Austin as soon as Hanukkah, which begins Tuesday evening.

Across the country, as Jews have left small towns for bigger cities, synagogues have deteriorated or been converted to churches, theaters and even a hardware store. Toubin, a cowboy-hat-wearing 86-year-old, did not want that for B’nai Abraham, which has not regularly been used for religious services in more than half a century.

“This one here, God willing, it’ll have a future,” he said.

Once moved, the synagogue — whose name means “Children of Abraham” — will lose its spot on the National Register of Historic Places and its status as a Recorded Texas Historic Landmark. Some connected to the synagogue worry that the move threatens to erase the memory of Jewish life in Brenham, a onetime regional economic hub where immigrants from Poland and Lithuania worked as merchants and, in 1893, built a modest synagogue. 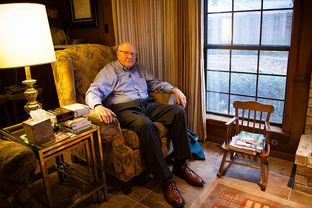 Enlargephoto by: Anneke Paterson
Leon Toubin, whose family worshipped at B'nai Abraham synagogue for generations, inside his home in Brenham, Texas.

Those applauding the move say a new beginning awaits B’nai Abraham in the Texas capital, where a modern Orthodox congregation called Tiferet Israel plans to worship in the building. Austin Jewish leaders say the building could spark interest in the city among Orthodox Jews.

“When I look at that synagogue, I see a house that’s soul-built, that’s spirit-built, because there is nothing ostentatious about it,” said Rabbi Daniel Millner of Tiferet Israel. “In that way it really embodies the purest spirit of Jewish ritual life. It is that vision, it is that dream, it is that essence that we are transporting, not just the building itself, but everything that it represents, and all of the work and all of the love that went into it, from the handmade nails to the hand-cut wood.”

When Toubin looks at B’nai Abraham, he sees himself as a boy accompanying his father to services. He remembers being sent to the corner filling station to phone people when there were not enough men for a minyan, or quorum.

The building, like Toubin himself, is a mix of American and East European, said Samuel D. Gruber, an architectural historian in Syracuse, N.Y. “He’s as much a Jew as a Texan and as much a Texan as a Jew,” Gruber said.

Gruber’s great-grandfather was among the founders of B’nai Abraham, and the synagogue inspired him to dedicate his life to preserving historic Jewish sites around the world. He has mixed feelings about the move.

“It’s there like an anchor for me of what my American roots are,” he said. “Not having the synagogue in Brenham may make it harder for me to connect with that past.”

But moving, Gruber said, means B’nai Abraham will once again serve a synagogue’s main purposes: as a house of gathering, prayer and study.

“Jewish life in Brenham is a thing of the past, and Jewish life in Austin very much has a future,” said Jay Rubin, chief executive of the Jewish Federation of Greater Austin.

As Austin has grown, so has its Jewish community. In the metropolitan area of about 1.9 million people, there are some 18,000 Jews, compared with about 3,000 in 1980, Rubin said. Still, there are few Orthodox Jews.

“The interest is tremendous,” said Jeffrey Kane, president of the Tiferet Israel congregation, which has about 50 member families. “We get calls every couple of weeks from people in New York, or people in Dallas or Houston, who want to move to Austin, but ultimately decide not to do it because there is no infrastructure here.”

Infrastructure like a religious school and an eruv, a ritual boundary that allows actions normally prohibited outside the home on the Sabbath (carrying things, for example). An eruv set to be completed by February — and the arrival of B’nai Abraham — could help generate interest in Austin among Orthodox Jews, Millner said.

First, the synagogue must make the journey. Last week, sawdust covered the building’s floor as workers braced its interior for the trip. The Torah scrolls and prayer books had already moved to Austin.

The roof will be lifted off with a crane and cut into two pieces. The building will be jacked up and loaded onto one flatbed truck, and the larger roof piece onto another, said Chris Sharp, general superintendent of DKC Construction Group, which is handling the move. Slowly, the two trucks will make their way to Austin with a police escort. The roof’s smaller piece will follow later.

The move — and building upgrades — will cost about $600,000, paid for by donors, most connected to the Toubins or the synagogue, Rubin said.

The Texas Historical Commission encourages communities to preserve historic buildings in their original locations, but in the case of B’nai Abraham, the agency “recognized that additional negotiation wouldn’t have changed the outcome,” said an agency spokesman, Chris Florance.

Brenham, the home of Blue Bell ice cream, considered making the synagogue part of its parks department, Mayor Milton Tate said. But it would have been a tourist attraction with no religious services.

Jews played a vital role in developing the community, Tate said, but most have moved away or died. The Toubins’ children live in Houston and Dallas.

“The Toubins,” Tate said, “are the last of the Mohicans.”

At the Jewish community campus in Austin, the building will be pieced back together in a grove of trees on a site where soil from Brenham and Jerusalem were mixed with the Austin dirt. It will get new insulation, restrooms, air-conditioning and electrical wiring.

It will be called B’nai Abraham Brenham Historic Synagogue.

It will host daily prayers for members of Tiferet Israel, who now worship in an education building at the Jewish community campus. Other Jewish groups will also use it. There will be holiday services, educational programs and bar mitzvahs.

Judith Katzman's oldest son had his bar mitzvah at B'nai Abraham in Brenham. She treasures the synagogue as part of the town’s landscape.

“It really touches me to drive by it and have it pop up,” she said. But when it is gone, she added, “We’ll all be okay.”