The puns ranged from predictable to painful when word spread that the University of Texas at Austin lost track of about 100 brains. Imagine the reaction when folks learn that the school has also misplaced at least two heads.

Thomas Taylor's bust was later found in a Bandera County museum. William Sutton's is still missing, but his great-granddaughter thinks it might be tucked away somewhere on campus.

Busts of the two men — a former engineering dean and former UT president, respectively — are but two of the myriad items gone astray over the years. There have also been clock faces, pieces of buildings, a World War I service flag. And, perhaps most oddly, ivy.

“Nobody should be surprised,” said Jim Nicar, a former historian with the university’s alumni association. Museums like the Blanton and the Harry Ransom Center tend to keep a pretty close eye on things. But any institution as big as UT is bound to lose track of stuff, says Nicar, who tracks down historic items that are often forgotten in closets and dusty boxes.

In such a neglected cubbyhole, UT employee Sally Hoffman hopes to reconnect with her great-grandfather. Sutton served as UT president in 1923 and founded the College of Education. His bronze bust was on display in Sutton Hall until 1980, when the School of Architecture moved in and the bust went missing.

Also missing are pieces purposefully saved from the first campus dorm after it was razed. Nicar found one of the dorm's pediments in a warehouse a few years ago. Bricks from the old building are yet to be found.

Nicar had better luck finding the bust of Taylor, founder and first dean of the college of engineering. An alumnus spotted it in the Frontier Times Museum in Bandera, Texas — a place filled with relics from the “Old West.” No one knows how it ended up there, Nicar said.

Some losses can never be reclaimed. In the 1980s, the university stripped creeping ivy from some of the campus's older buildings. Officials didn't know at the time that the plants had been carefully cultivated from the ivy that crawled up the walls of the Old Main building before it was destroyed in the 1930s. 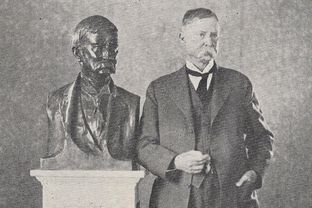 Enlargephoto by: The Alcalde
A bust of Thomas Taylor, the founder and first dean of the University of Texas’ engineering college, was a gift to the university in 1929. Somehow it ended up in an Old West museum in Bandera, Texas. This photo was originally published in The Alcalde on March 2, 1929.

“There is always changes of presidents and staff all over the campus,” Nicar said. “It is difficult to relay information to the next generation.”

Those who forget history are doomed to repeat it. UT has appointed a committee to investigate the 100 missing brains that, it turned out, had been thrown away. Heads may roll.