After being booked on two felony counts — a process that took less than 10 minutes — Gov. Rick Perry again stood by his veto of public integrity unit funding and called his indictment "a chilling restraint on the right of free speech."

"This prosecution would seek to erode the power of all Texas governors — Republican or Democrat — to veto legislation and funding that they deem inappropriate," Perry told a throng of supporters and media outside the Blackwell-Thurman Criminal Justice Center in Austin.

"This indictment is fundamentally a political act that seeks to achieve at the courthouse what could not be achieved at the ballot box."

Perry was indicted last week on two counts: abuse of official capacity, which carries a five- to 99-year prison sentence, and coercion of a public servant, which is punishable by two to 10 years in prison.

Perry’s defense team has described the indictment as “dangerous” and unprecedented, saying it was an attempt to “criminalize politics” by Perry’s detractors. The governor’s critics say he crossed the line by trying to bully and cajole Lehmberg into leaving office, both before and after Perry’s veto. 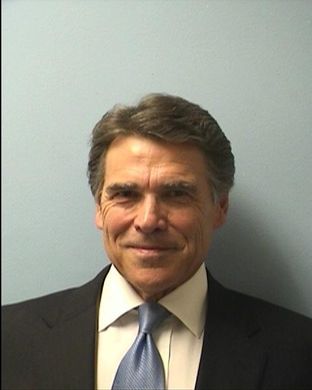 Enlarge
Gov. Rick Perry's mug shot was taken on Tuesday when he was processed in Travis County.

Before he entered the Travis County facility, Perry told the crowd that the actions he took were within the authority he has under the state constitution.

"I'm going to enter this courthouse with my head held high knowing that the actions I took were not only lawful and legal but right," Perry said.

"If I had to do so, I would veto funding for the public integrity unit again."

Republican supporters gathered outside the courthouse Tuesday to demonstrate their solidarity with the governor.

Michael Czin, a spokesman for the Democratic National Committee, criticized Perry for treating his booking appearance as a "sideshow."

"When Rick Perry has his day in court, his case will be decided by the facts, not theatrics," Czin said. “We look forward to the evidence being presented in court that convinced a jury of the governor’s peers to indict.”

But Perry said he would waste no effort in defending his actions.

"I’m going to fight this injustice with every fiber of my being," Perry said. "And we will prevail."

Alexa Ura contributed to this report.