WESLACO — The Rio Grande Valley landscape is painted with signs and banners proudly showcasing that people here are honored to serve those who have served in the military.

“There is a great sense of patriotism in the area,” said Dr. Alexander P. Sudarshan, an ophthalmologist who treats patients referred by the U.S. Department of Veterans Affairs. “People that served their country deserve medical care rather than being put on waiting lists and not getting to see a doctor for six months.”

Sudarshan, who has been practicing in the Valley for 25 years, said before 2004, he treated many veterans sent by the federal agency. But from 2004 to 2012, he said his office did not see a single VA patient, and in 2013 he treated only one veteran. During that time, Sudarshan said, the veteran’s agency began limiting which doctors would see its patients; he was not on that shortlist.

“Let’s deal with the backlog that we have now,” said Sudarshan, whose office has tallied more than 17,000 visits this year, including visits by 32 veterans. “There are people now who deserve treatment. We have a system. We have doctors who would be honored to treat them. Bring us these patients.”

In the Valley, where the closest veterans hospital is more than 250 miles away, veterans have long had to seek specialty care in the private sector by using vouchers. Those vouchers grant the patients access, but the providers must file invoices to get paid.

In light of whistle-blower claims that staff members at agency hospitals nationwide fudged records to make it appear that veterans were experiencing shorter waiting times, the system is expanding the voucher program as part of a major overhaul to help address the massive backlog. Doctors and patients in the Valley welcomed the additional resources, but they said the voucher program must be improved to maximize its effectiveness.

Vouchers are a common form of currency for the 30,000 veterans who seek care in the VA Texas Valley Coastal Bend Health Care System, which includes the state’s 20 most southern counties. Many physicians said the process was marked by difficulties accessing patients’ medical records and collecting past-due payments.

“They are very antiquated,” Sudarshan said of the agency’s process. “Their electronic medical records system is a horror from 25 years ago, but because it’s their way, they won’t change anything.”

Still, the hope is that the voucher solution outlined in the Veterans Access, Choice and Accountability Act of 2014 — which President Obama signed into law on Thursday — will be different.

“Everybody can rest assured that we’re here to provide outstanding timely care to all of our veterans,” said Hugo Martinez, a public affairs officer for the VA and a Vietnam War veteran. “We know that we’ve had some issues, some systemic issues, but we’re working aggressively to remedy those issues.”

Within days of the scandal breaking, the agency put the Accelerating Access to Care Initiative into motion nationwide in May to shorten waiting times. That backlog included more than 1,000 veterans in the Texas Valley Coastal Bend system who were 90 days or more out from their appointments to see medical providers.

Staff members called veterans waiting 30 days or longer to offer them an earlier appointment if available, allow them to keep their appointment or let them bypass the agency with a voucher to seek care from a local non-VA provider.

Martinez said the longest waiting times for the Valley Coastal Bend system were in audiology, optometry and ophthalmology — areas that lacked doctors or the right kind of specialists.

Jose Juan Herrera, a Vietnam War veteran who was recently examined by Sudarshan, said he was lucky that he got a voucher and only waited three weeks.

A mortar shell exploded in Herrera’s face during combat, and it has become increasingly difficult to keep his eyes open. During the appointment, Sudarshan explained, “What we want to do is get in there and use the muscle that lifts the eyelid and reattach it.”

Without a voucher, Herrera, a Purple Heart recipient, would have to drive from his Weslaco home to the nearest VA hospital, in San Antonio. 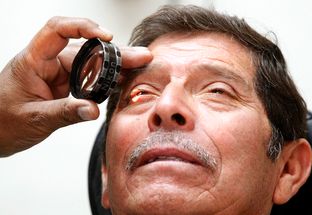 “Thank God, with the VA, they helped me out,” he said. “They put me back together.”

Sudarshan is unsure of when and where he will perform Herrera’s surgery. He must obtain initial approval from the agency to conduct the surgery and then must find a facility where he can operate.

“The good part is treating veterans,” Sudarshan said. “The not-so-good part is trying to get paid for the service because typically the VA takes forever to pay.”

Dr. Austin King, a head and neck surgeon in Abilene and the president of the 47,000-member Texas Medical Association, said delayed or no payment had made it difficult for specialists to accept VA patients into their practices.

“A lot of them would be willing to see vets for free,” King said. “You pay taxes to the feds, who in turn can pay administrators at the VA but can’t pay the ones providing the services.”

Martinez, the Valley Coastal Bend spokesman, admits that as recently as 2010, the system was understaffed. But the agency has since doubled the number of people processing claims for payments to non-VA providers. And improvements have been seen after the May initiative was rolled out — a plan that includes hiring more doctors and nurses. The July 2014 claims report for the area showed that 92 percent of all properly filed claims were paid within 30 days. That is down slightly from 97 percent in June.

King and Sudarshan recently traveled to Washington, D.C., where they successfully lobbied for the inclusion of language in the new legislation addressing the importance of timely payments to non-VA providers.

The statute calls for the Department of Veterans Affairs to comply with the “prompt payment rule” for non-VA care it approves — that is, to issue funds as soon as the invoice, receipt and acceptance documents are submitted. Not doing so entitles the vendor to collect interest penalties.

Doctors in the Valley are optimistic that the new law is a starting point for improving veterans’ access to care — and that they, as non-VA providers, will be able to continue serving those veterans knowing they can expect timely payment.

“That would be progress for us as doctors,” Sudarshan said. “A guarantee of getting paid within a year is much better than not being paid in two years.”

Disclosure: The Texas Medical Association is a corporate sponsor of The Texas Tribune. A complete list of Texas Tribune donors and sponsors can be viewed here.