When Austinite Natalie Madeira Cofield walks among the local boutiques and cafes in her South Congress Avenue neighborhood, she likes to take note of the other African-Americans she sees.

“If I get past 10, I’m like, ‘Wow, there are a lot of black people out today,’” said Cofield, 32, who moved to Austin three years ago from Washington to become head of what is now the Greater Austin Black Chamber of Commerce.

Austin, with a population of 885,400, is among the country’s fastest-growing cities, luring residents with its live music scene, technology jobs and laid-back way of life. But the city is struggling to attract and retain African-Americans. Among large, fast-growing cities, Austin is the only one with a shrinking African-American population, according to a May report from the University of Texas at Austin that used Census Bureau data.

“It is completely outside the norm,” said Eric Tang, an author of the report, which looked at cities of at least 500,000 residents that experienced a double-digit rate of population growth from 2000 to 2010. While Tang said researchers expected to find that Austin’s African-American population was not growing at the same rate as the general population, they did not expect to find a decline. None of the other cities examined, Tang said, showed a drop.

The reasons for the decline, Tang said, include disparities in public education, a distrust of police and barriers to accessing jobs in the city’s booming technology and construction industries.

The report also suggested that the city’s history of racial segregation followed by gentrification of Austin’s historically black neighborhoods contributed to the decline.

“These patterns do not square with Austin’s reputation as a ‘tolerant’ city, one celebrated for its progressivism, cultural dynamism and emphasis on sustainability,” the report said.

Some black residents are leaving Austin — which is 8 percent African-American — for suburbs like Pflugerville, in search of better housing value and an escape from a school district they see as plagued with inequalities, according to the city’s demographer, Ryan Robinson. Others leave for places with larger African-American populations, like Houston, Cofield said. 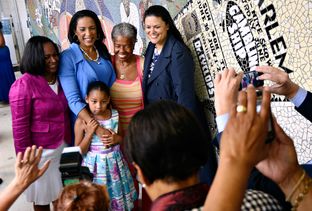 Among black professionals, there is a sense of “doing your time” in Austin and then moving on because many feel "invisible," said Cofield, who travels throughout the United States and to countries like Brazil to promote Austin as a relocation destination for professionals and businesses.

The Rev. Dr. Joseph C. Parker Jr., the senior pastor at Austin’s David Chapel Missionary Baptist Church, said that while Austin holds itself out as an example of progressivism, “there is a disconnect between that image and what is happening on the ground.”

“There is a question as to whether or not there is equity, particularly economic equity, in our city,” in areas like job and entrepreneurial opportunities for African-Americans, Parker said. He was one of 22 African-Americans honored by the city on a rainy June day for their contributions to Austin. The civic leaders’ portraits were added to a mural at a cultural center on the site of a restored East Austin home built by a freed slave.

Not all the honorees live in Austin. One, state Rep. Dawnna Dukes, is a third-generation native of the East Austin community who moved to Pflugerville in 1999 because three of her sisters had relocated there.

“We weren’t looking at it as, ‘It’s Pflugerville, we’re moving away from Austin,’” Dukes, a Democrat, said. “We were looking at it as a neighborhood that felt like the old East Austin that we cherished.”

The creation of an African-American community in East Austin was not an accident. After a 1928 city plan called for a “Negro district” east of the Texas Capitol, many African-Americans moved there because the only schools and parks open to them were in that part of town. Years later, East Austin’s proximity to downtown has driven up property values and taxes in the area, prompting some longtime residents to leave.

“Segregation and gentrification are not unique to Austin, but the convergence of those two forces is unique,” said Tang, an assistant professor who studies racism.

One morning last month, Richard and Bridgitt Allen traveled from their home in Leander, an Austin suburb, to join a bus tour of East Austin, where they both grew up. The bus passed the public housing complex that was Richard Allen’s childhood home and stopped at his alma mater, Huston-Tillotson University, a historically black institution that predates UT-Austin. But the Allens, both 54, did not even consider East Austin when they moved to Leander in 2006; the character of the area had changed, they said.

As more black residents leave, a nonprofit called the African American Cultural Heritage District — which organized the bus tour — is working to preserve historical sites in East Austin. The district was a result of a 2005 city study on African-American quality of life that followed accusations that Austin police were using excessive force against minorities and outrage over officers who, at the scene of an East Austin nightclub fire, sent text messages like “Burn baby burn.”

Some black Austin residents without roots in the city have little connection to East Austin. Greg Roberts, a fitness entrepreneur, lived south of downtown Austin until his wife’s job took them to Houston a few years ago. He loved Austin, but said that when black friends came to visit, “they’d look at us like we were foreigners, talking about things they haven’t been exposed to,” like kayaking and the Austin City Limits music festival.

“There is this perception that Austin doesn’t welcome African-Americans, which I completely disagree with,” said Roberts, 38.

But Terry Pierre, 29, has sometimes found Austin unwelcoming to African-Americans – and it’s her hometown. Pierre, an event promoter whose parties feature hip-hop music, sports figures or fashion, said downtown venues have turned down her reservation requests.

“They just don’t want to deal with the crowds – not our music, not our people,” she said.

And Joshunda Sanders, a Washington-area speechwriter and former Austinite, has written that black people in Austin experience a “relentless sense” of not belonging.

“For instance, I’m a homeowner, but people frequently assume that I must be visiting from where the black people live,” Sanders, 36, wrote in the Austin American-Statesman in December as she left Austin.

Austinite Wendolyn Washington has no intention of leaving the city where she moved 14 years ago. For her, the connections she made in an African-American mothers’ group were crucial to settling into the city.

“We were able to find our niche in Austin,” said Washington, 57, a real estate agent. “Sometimes people have a difficult time finding that.”

Pierre, the event promoter, is giving Austin another chance. In April, after a stint in San Antonio, she returned to the state capital, where her business provides the type of urban entertainment that her friends complained they could not find in Austin.

“I know the potential for this city,” Pierre said. “Everyone can’t just leave.”