When Terry Pelz, a former warden with the Texas Department of Criminal Justice, testified against a prison gang leader, Mark Fronckiewicz, in the 1993 capital murder trial of a fellow inmate, he had choice words for him.

At his best, Pelz said, Fronckiewicz was a “true convict.” At his worst, he was a “little turd.”

Decades later, after an appeals court overturned Fronckiewicz’s death sentence and he was paroled, the men became friends. The former inmate, who had found work as a paralegal and become a fierce advocate for prisoner rehabilitation, had started the Hand Up, a for-profit halfway house for former convicts. “It was really a turnaround,” Pelz said.

Fronckiewicz died last month at a time when the transition program in southeast Houston is facing eviction after missing a rent payment.

While demand for transitional housing is high, few former offenders can afford the $550 a month they must pay for rent, meals and utilities, said Sheila Jarboe-Lickteig, who co-founded the program last year with Fronckiewicz, her husband. Advocates for prisoner rights say the conundrum is typical. Few of the thousands of offenders released by the Texas prison system each year are able to find steady jobs or stable housing, both of which help prevent recidivism. Roughly a quarter of them are back in prison within three years, according to criminal justice department data.

The state has contracts with seven halfway houses to offer subsidized housing to about 1,800 former inmates upon their release. Last year alone, about 72,000 people were released from state prisons.

"It's a problem," said Jorge Renaud, a policy analyst for the Texas Criminal Justice Coalition. “There is nowhere near the amount of transitional housing that we need.”

Jason Clark, a spokesman with the criminal justice department, said the agency “is working to secure additional halfway house beds, but demand remains higher than the beds that are available.” Priority is given to those who “need closer supervision and special services or who lack family and community resources,” he said.

For many inmates, the private market is not an easy option.

At the Hand Up, roughly half of the 32 available beds are empty despite dozens of applicants, because “you’ve got to be able to pay the rent,” Jarboe-Lickteig said. "You've got the people that are coming out of prison that can pay," she added, "and you've got those that cannot pay. There are a lot more who cannot pay."

Even with the high vacancy rate, she said, the house is full of success stories. 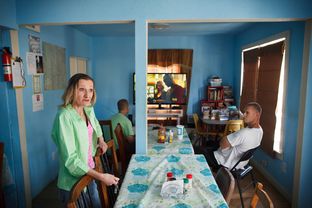 Enlargephoto by: Michael Stravato
Sheila Jarboe-Lickteig, the owner of the Hand Up, checks in on former inmates in the dining room.

The atmosphere is in some ways reminiscent of a college dormitory. On a recent visit, pairs of roommates traded gossip and smoked cigarettes in front of a television in the dining room. Others trickled in after work at maintenance or construction jobs. Several praised the skills of the man on cooking duty that week, a convicted murderer who identified himself as “Wild Bill.”

Residents at the Hand Up are afforded more freedom of movement than at state facilities, which they say makes it easier for them to find work and transition into life outside prison.

Monitoring parolees can be thorny. After reports in April that hundreds of residents had fled the state’s largest contracted halfway house, State Senator John Whitmire, Democrat of Houston and chairman of the Senate's Criminal Justice Committee, called for more security there.

Jason Gehm, a 32-year-old at the Hand Up who spent 18 months in prison on a burglary charge, was discharged to a state-chartered halfway house in Fort Worth, but he said restrictions there made it “basically impossible” to find a job. When he came to the Hand Up, Fronckiewicz helped him prepare a résumé that landed him a construction job.

Friends of Fronckiewicz said he viewed his work at the Hand Up as a way to make a case against the death penalty.

“These are compelling examples of people who really try to change their lives around and do good for society,” said David Atwood, founder of the Texas Coalition to Abolish the Death Penalty.

Jarboe-Lickteig said the work was emotionally transformative, if financially uncertain.

“I’ve found a lot more compassion for people that I thought I didn’t have,” she said.