Since March, the question of equal pay has been a key issue in the Texas gubernatorial contest between Democratic state Sen. Wendy Davis and Republican Attorney General Greg Abbott. Davis has criticized Abbott for not paying female lawyers in his office as much as men. Abbott has deflected the criticism, saying he believes women should be paid as much as men.

The Tribune gathered payroll information from California and Texas, and compared the differences in median and average pay for male and female lawyers at both prosecutors' offices. Though each state's agency has some unique responsibilities, both are charged with representing their respective states in litigation and with serving as legal counsel to state agencies, boards and commissions.

The comparison, which took seven weeks to complete because California did not immediately turn over relevant information, revealed that while there were some discrepancies in compensation for male and female lawyers at both state agencies, Texas female lawyers fell further behind than their California counterparts. 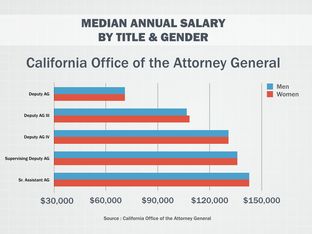 In March, a Tribune analysis of state payroll data found a gender pay gap is prevalent across wide swaths of Texas government. The Texas AG’s office had the ninth-largest gap between average male and female pay among agencies with 100 or more employees, excluding universities.

The issue of gender pay has gained traction in this year’s governor’s race, in part because Davis sponsored a bill last year that would have made it easier for women to challenge pay discrimination in state courts. Gov. Rick Perry vetoed the bill, saying it duplicated federal law. Abbott has said he opposes wage discrimination but that he agreed with Perry’s decision.

"I fully expect women to be paid what men are paid,” Abbott told WFAA in March. “There shouldn't be any differential in payment because of sex. I'm proud to say that Texas is one of the few states in the nation that has a constitutional protection against discrimination of any type.”

The Tribune compared the Texas and California AG’s offices in part because of the states’ long-standing rivalry, but also because the agencies are similar in size: The Texas AG’s office has 4,081 employees, and the California AG’s office has 4,355 employees. Both offices are run by high-profile figures in their respective states. Abbott, as a candidate for governor, is a leader in the Texas Republican Party. Similarly, California Attorney General Kamala Harris is seen as a rising star among Democrats in her state, and is widely viewed as a contender for California governor in 2018.

Harris has been an advocate for measures proposed by the Obama administration to close the gender pay gap, including strengthening legal protections for women who are subject to pay discrimination.

“If you lift up the women of a community, the entire community will be raised,” Harris said in January at a fundraiser featuring Michelle Obama, according to the San Francisco Chronicle.

The California AG’s office was less forthcoming with basic information about its employees compared with the Texas AG’s office, complicating efforts to compare the two agencies on gender pay equity. Specifically, the California AG declined to identify the gender of any of its employees. In a letter explaining the agency’s decision, Mary Sayre, chief of personnel programs, wrote that a worker’s gender or race was “personally identifying information for which those employees have a constitutional right to privacy.”

Also, the names, titles and pay of approximately 282 other employees were withheld because those employees are involved in “covert criminal investigations,” according to the agency.

The California AG’s office ultimately agreed to perform its own analysis of its payroll and how each gender fares, based on the Tribune’s request.

At both agencies, females outnumber males. Seventy percent of the Texas AG's staff are female, a larger proportion than nearly every other state agency in Texas. At the California AG’s office, 61 percent of the staff is female.

In both agencies, women appear to have a larger representation in the bottom half of salaries, and the two agencies exhibit a similar gender pay gap when their entire workforces are compared. The median female worker makes 66 percent of the median male worker at the California AG’s office, compared with 67 percent at the Texas AG’s office. 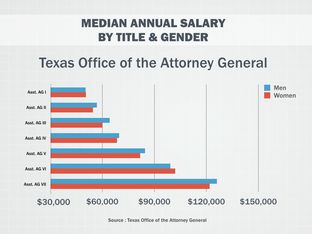 At the California office, there was no difference in median pay for male and female lawyers in four of the five job groups. For the remaining group, the median female lawyer was paid an additional $1,620, or 1.5 percent, more than the median male.

"We are eliminating the gender pay gap at the California attorney general’s office and are committed to help close the gap across all employment sectors in our state and across the country," Pacilo said.

The Texas attorney general’s office did not respond to questions about gender pay for this story. However, in March, Lauren Bean, the Texas agency’s spokeswoman, warned against reading too much into measures of gender pay disparity among the agency’s attorneys, even those who have the same title.

"Looking at salary averages for a diverse group of attorneys – even if they all share the same job classification – isn’t a useful way of determining whether any individual attorney is fairly paid," Bean said.

The Abbott campaign did not respond to a request for comment.

"Once again, this represents the clear choice in this election: Wendy Davis is fighting to pass equal pay legislation in Texas while Greg Abbott promises to veto that bill which would help the women in his office fight back against the clear pay disparities in his office," Petkanas said.

Dan Hill and Marcos Vanetta contributed to this report.