PALESTINE — Quiet is hard to find in prison. But in the Powledge Unit gym on Tuesday afternoon, the silence was interrupted only by the sounds of breathing, toes squishing on sticky yoga mats and the occasional moans from nine men in white uniforms as they sank deeper into pigeon pose.

“It hurts in a good way,” said Stephen Vinez, who is serving a 20-year sentence for a manslaughter conviction.

The class was the fourth that Jim Freeman, a lawyer turned yogi and the founder of Conviction Yoga, has led at the Texas Department of Criminal Justice’s Powledge Unit in East Texas. For the inmates, the weekly two-hour sessions offer a reprieve from their cells and the boredom of prison life, along with physical and mental health benefits. And the Powledge chaplain said corrections officers saw better behavior from inmates who took part in spiritual programs that teach morals and gave them a chance to exercise.

Freeman, 48, who started the volunteer yoga classes this summer, hopes to expand the program to all 109 Texas prison units.

But there are financial and administrative challenges. Freeman spends about $300 a week driving to four rural prisons from his Austin home. And the criminal justice department classifies yoga as a religious offering, he said, so at some prison units, only inmates who identify themselves as practitioners of Eastern religions like Buddhism, Taoism and Hinduism are allowed to attend. 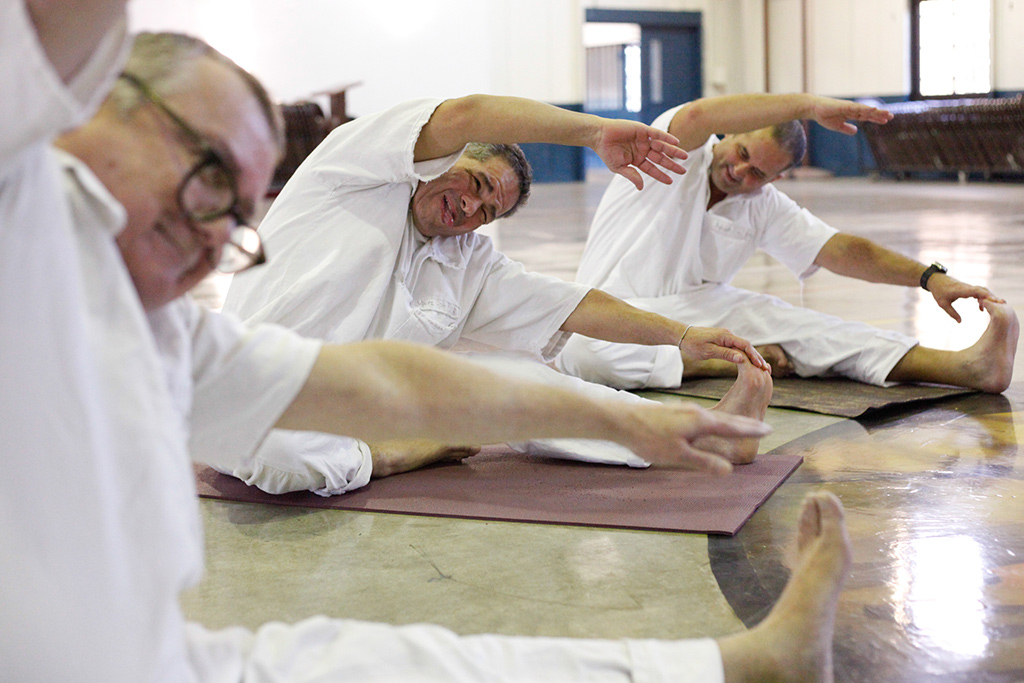 Enlarge photo by: Laura Buckman
Inmates during a yoga class at the Powledge prison unit in Palestine on Tuesday, December 10, 2013..

Freeman said he was determined to bring the transformative value he had found in yoga to as many prisoners as possible.

“I just see them as men,” he said of the inmates, “and men that are starving for something.”

Tuesday’s session was Bobby Husband’s first experience with yoga. Husband, who is serving 15 years for aggravated assault, grimaced as he moved through what Freeman called a “sun cellutation,” a version of the traditional series of poses modified for a narrow cell.

As Husband struggled to move from downward-facing-dog to a lunging pose, Freeman offered encouragement.

“That was perfect,” he said, leading the men in applause as Husband nailed the lunging pose. “I’m excited you did that. It’s tough.”

Sweat beaded on Freeman’s bald head as he urged the inmates to connect their breath and movements and to focus on the sensations of the stretching. Freeman, whose broad frame cuts an imposing figure, has been told that he looks more like an inmate than a yoga instructor. That could be one reason the men respond so positively; at most of the units, he said, participation is growing.

Freeman, who struggled with addiction in the past, said yoga changed his life after he used it for post-surgical rehabilitation in 2011. For the first time, he said, he felt true compassion. He later came to realize that little separated him from the inmates. It could have easily been him in one of those white uniforms, he said, had a bar fight gone wrong or a drunken accident turned deadly.

“The reality is, they are just human beings like me and you,” he said.

Yoga in prison is a growing trend, and more than a dozen correctional facilities offer classes through the California-based Prison Yoga Project. Freeman started Conviction Yoga after attending a seminar hosted by James Fox, the founder of the California program. 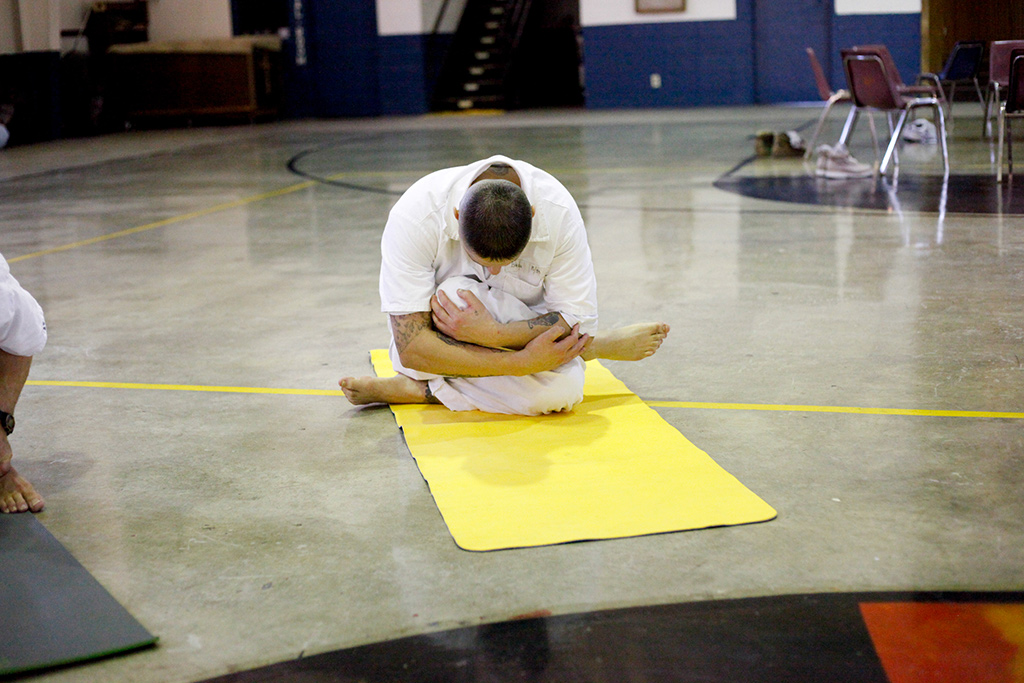 Enlarge photo by: Laura Buckman
Inmates during a yoga class at the Powledge prison unit in Palestine on Tuesday, December 10, 2013..

Denise Veres, a clinical researcher and yoga instructor, is founder and executive director of the Shanthi Project, a prison yoga program in Pennsylvania. The program began more than three years ago in youth detention centers, where Veres gathered data about the boys’ responses.

Freeman said he hopes that if Texas prison officials recognize those benefits, he will be able to offer more classes. He also aims to raise funds to hire more instructors and envisions offering yoga  at all prisons, and even on Texas’ death row.

“I hope to be 70 years old in prison teaching yoga,” he said.