AMARILLO — DeDe Cummins’ family has farmed in the Texas Panhandle for a century, but no one expected her to have any interest in the work.

“I was a girl,” said Cummins, 53, a high school special education teacher in Canyon, south of Amarillo. “It’s always been a man’s business, always.”

But six years ago, ownership of the land on which her grandfather grew wheat and ran cattle transferred to Cummins and her two sisters. Now Cummins, the only sister who did not sell her share, is scrambling to learn about the business of farming.

This fall, she took a six-session management workshop for farm women at the Texas A&M AgriLife Research and Extension Center at Amarillo to broaden her knowledge, going beyond what little she had learned growing up on the farm. The series of classes, called Annie’s Project, teaches women across the country about farm management, including legal issues like leasing contracts, and financial topics like cash flow, balance sheets and measuring profitability. The number of women running farms in Texas and across the country is growing, though women are still a minority.

“We’re sort of the changing face of agriculture,” said Nancy Farrington, 61, of Amarillo, an Annie’s Project participant, fourth-generation landowner and retired teacher, referring to women in general. “I’m never going to ride, rope or get on a tractor with the crop, but as the landowner I want to have a business knowledge.”

Some women do get on tractors, of course, but just 35,000 of the 247,000 farms in Texas, about 14 percent, have principal operators who are women, according to the federal census of agriculture from 2007, the most recent figures available. That is the same percentage of farms across the country with women as principal operators.

The census showed that women had a growing presence in agriculture in the United States, with the number of women who are principal operators increasing nearly 30 percent between 2002 and 2007.

Some women come into farm ownership unexpectedly, perhaps after a death in the family. When that happens, they can face challenges in the business.

“A lot of times, women don’t have the coffee-shop network that guys do,” said Jason Johnson, an A&M AgriLife Extension economist in Stephenville and the Annie’s Project coordinator for Texas.

Some women farming in the Texas Panhandle put it more bluntly, saying men simply do not want to do business with women.

Annie’s Project, whose national office is at Iowa State University, aims to provide an environment in which women feel comfortable asking questions, sharing experiences and forging their own networks. At a recent class, about 15 participants peppered one of the evening’s speakers, Lynn Tate, an Amarillo lawyer, with questions about estate planning — for example, whether a landowner should have a prenuptial agreement in place.

Annie’s Project, founded 10 years ago, now offers classes in 34 states. The first Texas class was in 2011, and the program is scheduled at Georgetown in Central Texas next spring. The six-session course includes topics like marketing, managing human resources and assessing production risk.

The workshop is named for Annette Fleck, an Illinois farmer in partnership with her husband. She died in 1997.

“My mother’s story is very ordinary,” said Ruth Fleck Hambleton, Fleck’s daughter, who founded Annie’s Project. “It’s not anything that someone else cannot achieve or relate to.”

Farrington said the course had given her the confidence to walk into a chemical store for herbicides or meet with a United States Department of Agriculture representative to discuss conservation. She is an owner of four properties — three in Foard County and one in Floyd County — that she leases to hunters and to wheat and cotton farmers.

“The first time I went to the chemical store, the agent looked around for a husband — I know that’s what he was doing — and then he said, ‘Oh, all right, how can I help you?’” she said. 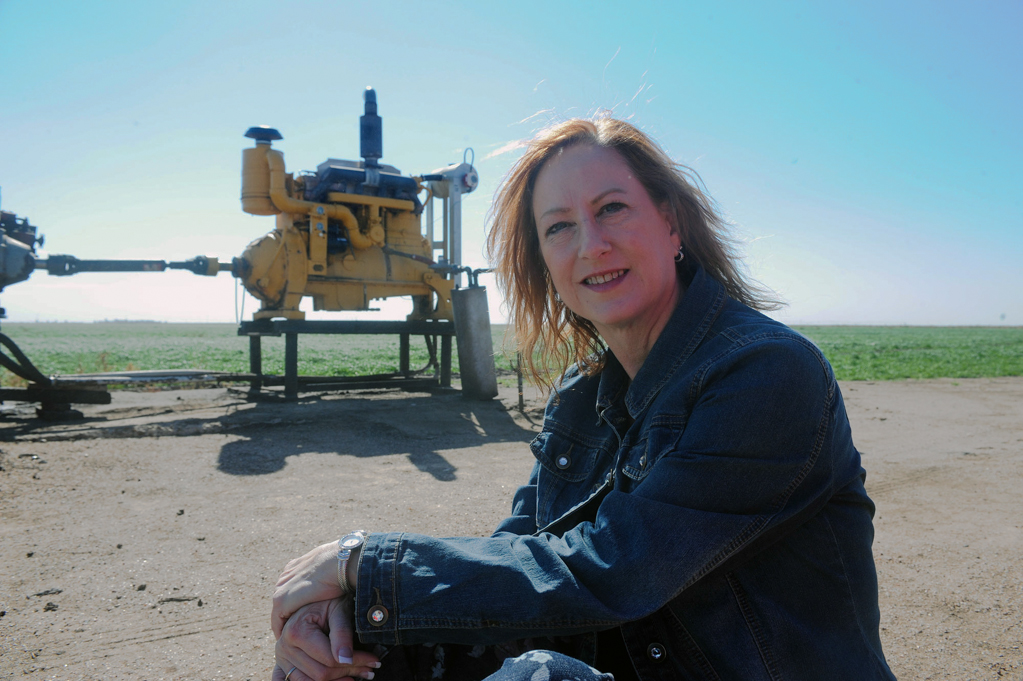 Enlarge photo by: David Bowser
DeDe Cummins sits next to an irrigation well at her farm in the Texas Panhandle.

Cummins, who has leased her land north of Amarillo to her cousin and plans to pass it to her son and her daughter one day, said she saw a bright future for women in agriculture. She has noticed more girls taking agriculture courses at Canyon High School, where she works.

But taking on farming operations is largely new territory for women, she said.

Teresa Barkley, 58, a farmer who worked for many years at a bank, said she often saw women who were overwhelmed when they inherited land.

“The husband would die, and the wife had that shocked look in her eyes,” Barkley said. “Some had never even written checks. They just didn’t know what to do.”

Barkley said that the situation had improved in recent years but that she did not want her daughter, Timber Barkley, to end up in that situation.

That is unlikely, because Timber Barkley, 26, was raised and still lives on her father’s family’s farm north of Amarillo, between Gruver and Spearman, in a part of Texas where tractors are rarely in the field on Sunday mornings because almost everyone is at church. (“We believe in God in Hansford County,” Teresa Barkley said.) Timber’s father, Tim Barkley, is the principal operator of the small farm, where he and his family grow corn, wheat and milo (grain sorghum).

Timber Barkley, who joined her mother for the Annie’s Project course, was “born with a farmer’s heart,” Teresa Barkley said.

The younger Barkley is pursuing a master’s degree in agriculture at West Texas A&M University. She said she wanted to keep her family’s farm running but feared that “land predators” would try to buy it.

Timber Barkley, who worked alongside her father on a recent weekend to plant wheat, is the fifth generation of her paternal grandmother's family to farm the land.

“My land is not only the history of my family and my county; it is also the future,” she said. “To be a farmer is one of the most gratifying and rewarding jobs I think a person could ever have.”