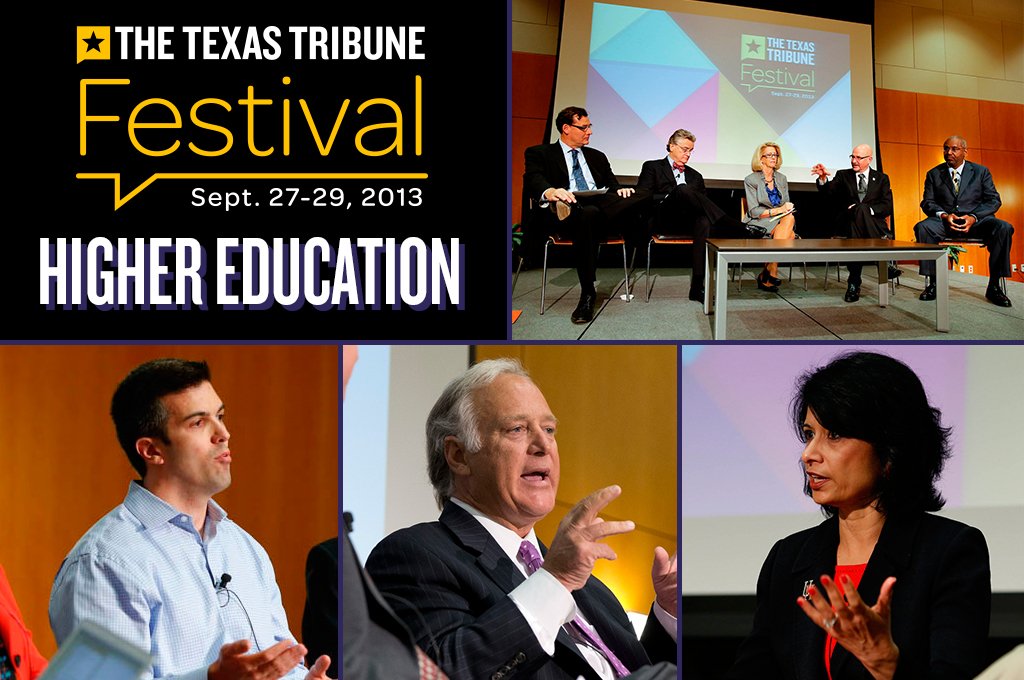 The higher education track at The 2013 Texas Tribune Festival featured panel discussions about the future of higher education, the state of smaller universities in Texas, the role of governance at public schools and whether to pay student-athletes. If you prefer to listen on the go, you can also download this track in podcast format from iTunes, by clicking here.

Looking ahead a couple of decades, Texas Monthly Senior Editor Brian Sweany started the day with a conversation about what "Higher Education in 2038" might look like. The panel featured University of Houston President Renu Khator; Western Governors University Chancellor Ray Martinez; Texas Higher Education Coordinating Board Commissioner Raymund Paredes; former Texas Workforce Commission Chairman and 2014 gubernatorial candidate Tom Pauken; and state Sen. Kel Seliger, R-Amarillo, chairman of the Senate Higher Education Committee. The panel talked about the importance of technical education, improving cooperation between universities and public schools, the increasing use of online education and the growing cost of tuition.

Texas Tribune Reporter Reeve Hamilton moderated a discussion featuring University of Texas System Regent Wallace Hall and state Sen. Kirk Watson, D-Austin, titled "Governance and the Role of the Regents: What Now?" The discussion focused largely on the controversy surrounding Hall, who is facing possible impeachment for, among other things, making massive open records requests regarding UT-Austin. Hall said he does his job because he cares about education, not for political reasons. Watson said the governance of public universities is a shared responsibility.

For the final session of the day, Spencer Hall, editorial director of SB Nation, led a panel discussion about "The Fight Over Paying Student-Athletes." Featured on the panel were Jody Conradt, former women's basketball coach at UT Austin; Kent Hance, Texas Tech University System chancellor; and Patrick Hruby, writer for Sports on Earth. The group talked about whether student athletes should be considered employees, how paying players could change the games and how adding money to the equation could affect team morale.