A Texas appeals court on Friday ordered a new trial for Dennis Davis, who is serving 36 years in prison for the 1985 murder of Natalie Antonetti of Austin.

In an opinion, the 3rd Court of Appeals agreed with Davis' assertion that his trial counsel was ineffective and did not present witness testimony relevant to the case, among other claims. Davis said his counsel did not offer evidence of a neighbor who claims he saw another person — not Davis — holding a club or small bat at Antonetti's home the morning she was bludgeoned to death.

"Because we conclude that Davis has established that his counsel's performance fell below an objective standard of reasonableness and prejudiced his defense, we will reverse the trial court's judgment and remand this cause for a new trial," according to Friday's court opinion.

For 26 years, the gruesome beating death of Natalie Antonetti — a carefree spirit and loving mother — remained a mystery. Austin police couldn’t find anyone with a motive to hurt the 38-year-old Cuba native who thrived on the city’s live music scene and often invited friends over for haircuts and home-cooked meals.

Last year, Travis County prosecutors convicted Dennis Davis of the murder after chasing down tips from his estranged wife and a string of ex-girlfriends. A jury agreed with prosecutors that Davis had been abusive and jealous and flew into a rage and bashed Antonetti’s head in with a bat as she slept on her couch on Oct. 13, 1985.

But the case against Davis, now 62, was based largely on the testimony of people recounting events more than two decades old. Less than a year after Davis was sentenced to 36 years in prison, Travis County prosecutors are re-examining the case, searching for DNA that might answer new questions about whether another man — one whose DNA has been connected to two eerily similar killings — could be linked to Antonetti’s murder.

“We don’t have any concerns that we got the wrong guy,” said Travis County Assistant District Attorney Mark Pryor, who prosecuted Davis. “But we’re willing to have a look.”

In 1985, Davis owned an Austin recording studio and spent many evenings listening to his friends’ and clients’ bands at Steamboat Springs, a popular live music venue. Antonetti worked at a landscaping company and ran in the same circles as Davis. They began dating after meeting at a party.

“It was her liveliness and her smile, and you know, her mannerisms,” Davis recently said of Antonetti, as he sat in his white prison uniform behind a glass window at the Terrell Unit south of Houston. “She was, what’s the word for it, vivacious, I guess is the best word for it.”

The two dated off and on before Davis broke off the relationship, but they still spoke regularly. At the time of the murder, Antonetti and her 16-year-old son shared an apartment with Susan Otten, a young woman who worked at Davis’ studio. Antonetti’s son, Johnny Goudie, now a well-known Austin musician, spent time at the studio, too, watching bands and learning about the business. 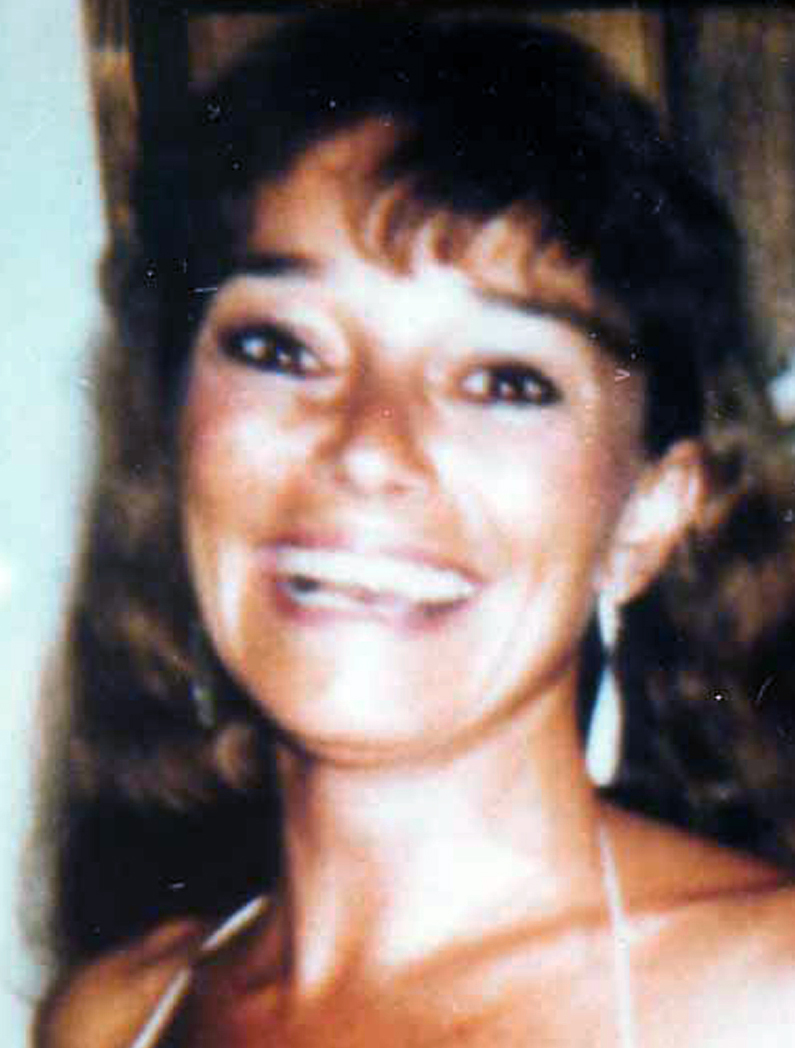 Oct. 12, 1985, Johnny had spent the evening at Davis’ studio, drank too much and went home to sleep. Antonetti went out for a live music show and met friends. When she came home, Otten told police later, Antonetti decided to take a walk around the apartment complex pool. At about 4:30 a.m., Otten got up for a drink of water and saw Antonetti sleeping on the couch. About an hour later, Otten awoke to thumping sounds and moaning. She heard a door shut and went to find out what had happened. Ms. Antonetti was on the couch, holding her head.

“I didn't recognize her, and she was covered in blood,” Otten recalled during last year’s trial.

She called 911 and woke up Johnny. He watched helplessly as his mother stumbled across the apartment, unable to form the words to answer his questions about what happened. He steadied her as she walked to the bathroom and tried to wipe the blood streaming from head away with toilet paper. Leaving a trail of bloody handprints on the walls she used to steady herself as she walked up the stairs, Antonetti changed from her running shorts and T-shirt into a white teddy.

Otten, meanwhile, also called Davis to the scene while they waited for the ambulance to arrive.

When it arrived, Johnny rode with Antonetti to the hospital. Before she slipped into a coma at the hospital, “she gave me a kiss and that was it,” he told the jury last year. “She didn't regain consciousness again.”

A neighbor in the same complex called 911 the same morning. Donn Chelli said he saw a tall, husky man with long, blond hair peering into his apartment and holding a bat. When Chelli confronted the man, he angrily responded, “You’re the second person who’s gotten into my shit tonight.” Police made a composite sketch of the bat-wielding man who Chelli had described.

John Martin “Marty” Odem, a man who fit Chelli’s description and also lived in Antonetti’s apartment complex, was convicted in 1986 of breaking into another woman’s apartment in the complex and raping her. He denied killing Antonetti, but after he went to prison, the Antonetti investigation seemed to trail off.

Then, on July 7, 2006, Becki Davis called the Austin Police Department’s tip line. She was going through a divorce from Dennis Davis and her therapist had told her she needed to relieve herself of things that weighed on her mind. And one thing that Davis told her in 1991 had nagged at her. As they laid in bed talking about his mother’s death and their future together, Davis cried and told her that he had “sinned against God and man.” She never asked him to clarify that statement, but she knew about Antonetti and wondered. Fifteen years later, she told police.

Acting on that tip, Tom Walsh, an Austin cold case detective began investigating. In the old police file, he found an angry note that Davis wrote to Antonetti, in which he cursed at her over her new boyfriend.

Walsh called the woman who Davis had said he was with the night of Antonetti’s murder, Amparo Garcia-Crow. She couldn’t remember that night initially, but the actress and writer consulted 30 years’ worth of journals she kept in her attic. There was no mention of Davis that entire weekend. Surely, she told Walsh, she would have noted it if Davis had left her early in the morning because a friend was attacked.

On April 1, 2008, Walsh went to Pennsylvania, where Davis was serving a three-month sentence for driving while intoxicated. He told Davis he needed his help finding out what happened to Antonetti and interviewed him for five-and-a-half hours.

A video of the interview shows Walsh, the white-haired veteran detective, rubbing Davis’ back, reassuringly. “Did you kill her? Did you?” Walsh asked. “No. Never. No,” said Davis, who added that he hadn’t attacked her and didn’t own a bat.

At his trial in April 2011, the jury heard from Garcia-Crow, Mudgett and witnesses who said Davis had a bad temper and owned a bat.

The defense presented witnesses who said Mudgett had often lied. Defense lawyers grilled Mudgettwho is now married to a police officer,  about why she had waited a quarter-century to tell law enforcement about Davis’ confession. She said she had been scared.

Becki Davis told the jury that her tip was the result of a misunderstanding. She and Davis had reconciled, and she told him that she had called police about his comment. He wasn’t angry, she said, but he explained to her that the “sin” he referred to was that he hadn’t spent enough time with his mother before she died of cancer. “Dennis never confessed,” she told the jury.

When Davis’ lawyer, Charles Grant, questioned Garcia-Crow about her journal from that weekend in 1985, she admitted that she had recorded nothing for that three-day period.

More important to Davis’ appellate lawyer Eric McDonald, though, is what the jury did not hear. The defense was unable to present its theory that a third-party intruder murdered Antonetti. Davis’ lawyers suspected that Odem, the convicted rapist, was the killer.

Davis, who is about 5-foot-7, bore no resemblance to the man the neighbor described. He was quite thin then and had dark hair and a dark mustache.

But Chelli refused to testify at trial, and detectives were unable to find an address at which he could be subpoenaed. Plus, police had lost the sketch that was based on Chelli’s description.

The jury returned a guilty verdict in about three hours, and Davis was sentenced to 36 years in prison.

Davis said he was floored by the verdict.

“I’m innocent. I wouldn’t hurt Natalie,” he said. “I’ve done bad things in my life, but not this. Not even close to this.”

Just months after Davis began his sentence, Michael Morton was exonerated in the 1986 murder of his wife, Christine Morton. He had served 25 years of a life sentence. New DNA evidence showed that another man, Mark Norwood, was linked to the crime. Norwood’s DNA was also found at the scene of the unsolved 1988 murder of Debra Masters Baker.

Norwood, a 57-year-old Bastrop dishwasher, faces trial in ChristineMorton’s murder and remains a suspect in the Baker murder. His lawyer, Russell Hunt Jr., has said Norwood has denies killing anyone.

Just like Antonetti, the other two women were bludgeoned in the head as they slept. The assailant entered their homes in the early morning hours through unlocked doors. Little or nothing was stolen, and none of the women were sexually assaulted. The three women were all brunettes in their 30s. And each of the murders occurred on the 13th day of the month.

The women also lived in close proximity to Norwood, who worked as a handyman and carpet installer in the 1980s. Norwood lived about 12 miles from Morton, a few blocks from Baker and about nine miles from Antonetti.

After reading about the striking similarities in a Texas Tribune report, Pryor said the district attorney’s office decided to re-examine the evidence in the Antonetti case. Items from the crime scene, including clothes and furniture coverings, will be examined to determine if enough DNA exists to test the biological material and compare it to Norwood’s DNA.

“In any murder case you’re going to get some weird coincidences,” Pryor said. “DNA is where we should put the weight if we have it and not coincidences.”

McDonald said he hopes that if investigators find DNA, they also compare it to Odem. Meanwhile, he is preparing to file an appeal of Davis’ conviction arguing that there was too little evidence to find him guilty beyond a reasonable doubt.

Davis said he is doing his own legal research, spending hours each day in the prison law library and learning from other inmates who have spent years poring over stacks of law books. And, he’s praying.