We asked our insiders this week who they think the early front-runners are to win the primaries for several 2014 statewide races.

In the Republican primary for railroad commissioner, 23 percent chose state Rep. Stefani Carter, R-Dallas, as their choice to occupy a spot on the board that doesn't oversee railroads but does regulate oil and gas. But more than 43 percent of our insiders didn't register a vote for any of the four candidates we asked about.

In the GOP primary for agriculture commissioner, the insiders' clear choice was state Rep. Brandon Creighton, R-Conroe. Nearly half of our insiders said they thought Creighton would be the GOP's choice to replace Todd Staples, who is running for lieutenant governor.

Among the announced Republican candidates for land commissioner, the office currently held by the colorful Jerry Patterson, George P. Bush was the clear favorite, with nearly 98 percent predicting he would win the race.

State Sen. Glenn Hegar, R-Katy, who led the Senate's battle for tighter abortion restrictions, was the insiders' choice in the Republican primary for comptroller, well ahead of state Rep. Harvey Hilderbran (who is expected to announce his bid on Tuesday), former state Rep. Raul Torres and former gubernatorial candidate Debra Medina. 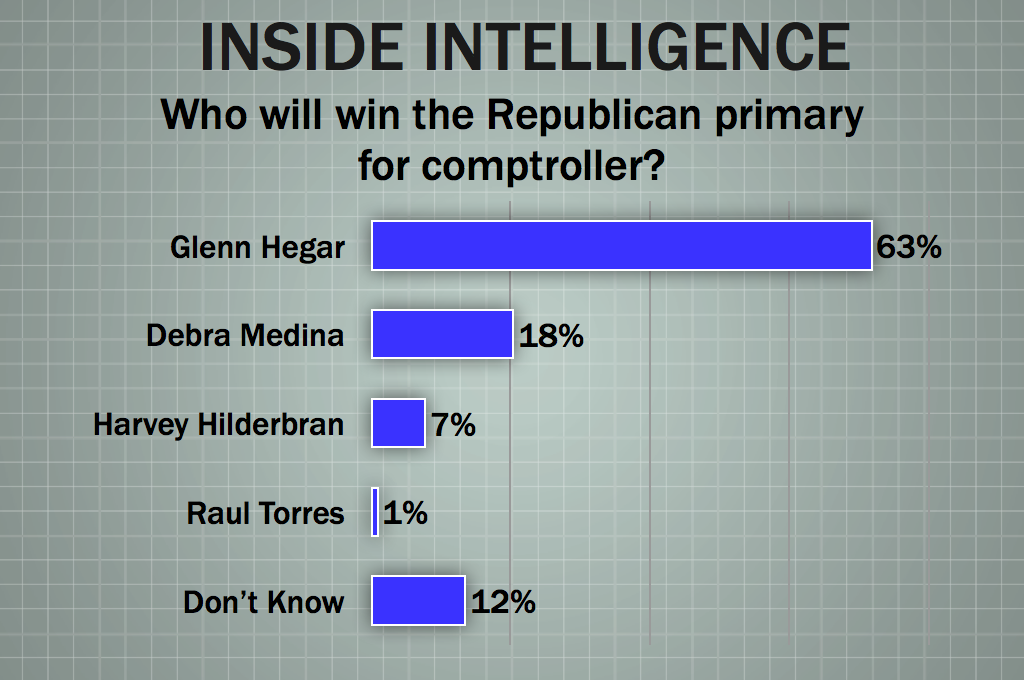 Who do you think would win the Republican primary for comptroller?

• “Medina is the best communicator - clear, concise, and with a talent for framing things in a way that resonates with average Texans.”

• “Three unremarkable, inarticulate, bland male candidates are unlikely to be a match for Debra Medina. Hegar might make it to a runoff with her.”

• "Hegar and Hilderbran have the chops to discuss fiscal policy, but in today's media savvy world Hegar comes across as young, smart, articulate and more polished.” 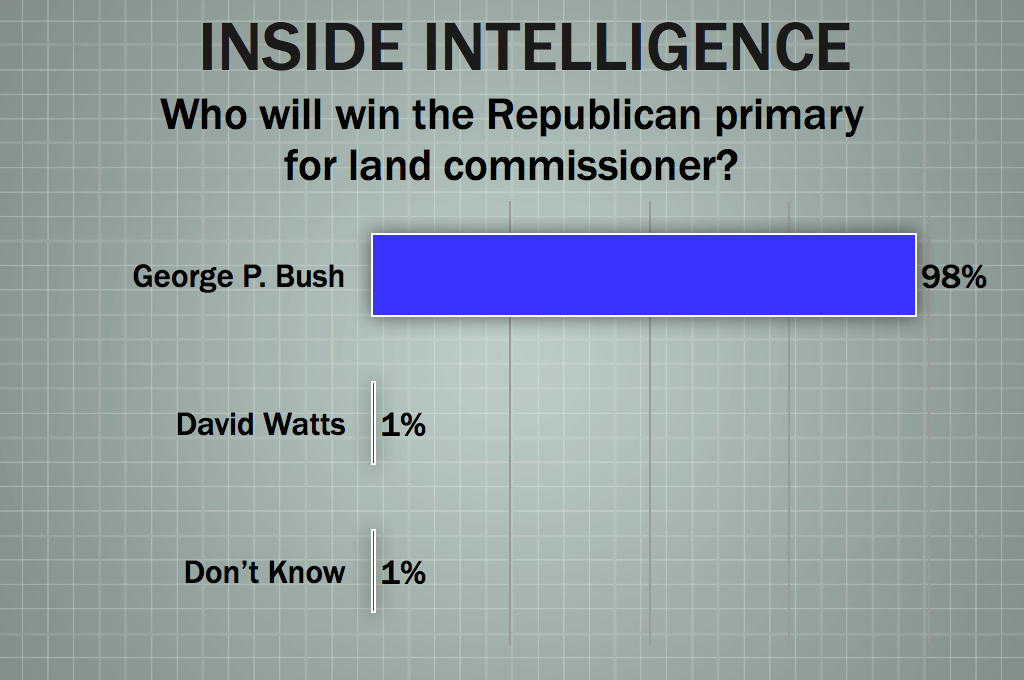 Who do you think would win the Republican primary for land commissioner?

• “Bush gets to ascend to high office in Texas. All hail the boy prince (or off with your head)!”

• “Dy·nas·ty: a succession of rulers of the same line of descent.” 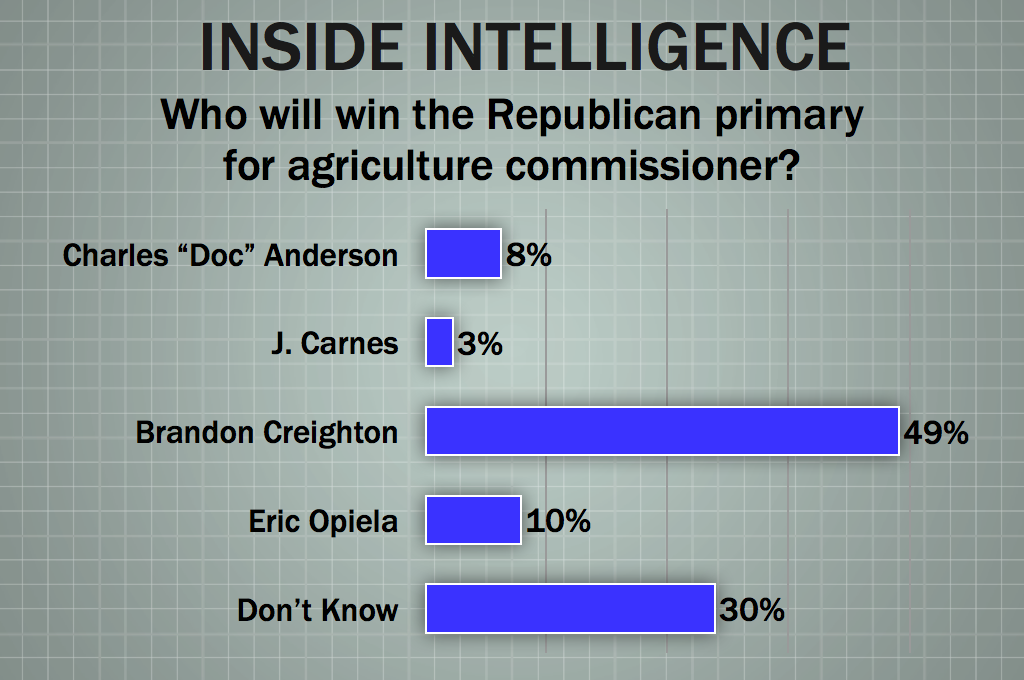 Who do you think would win the Republican primary for agriculture commissioner?

• “Unless the trust fund rancher buys this seat, the race should be Creighton's to lose.”

• “Unfortunately, Brandon Creighton. With the qualifications of this group substantially equal, look for good looks to prevail.”

• “If those are my choices, thank goodness I left the farm.” 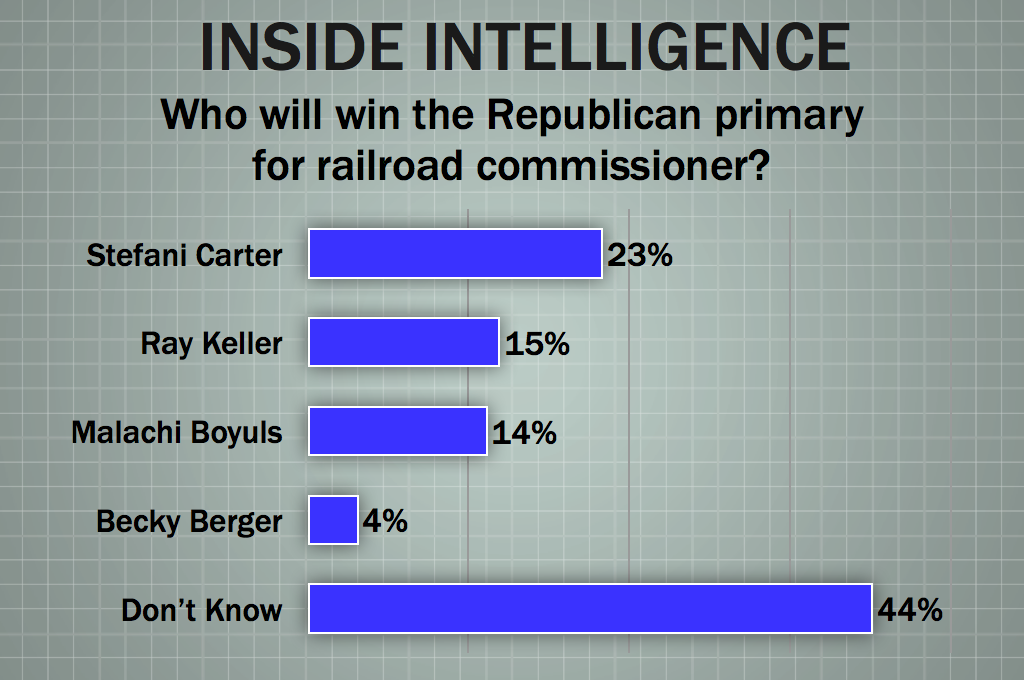 Who do you think would win the Republican primary for railroad commissioner?

• “Expect to see George P. and Malachi on the campaign trail together.”

• “Smart guy, great name and has experience in the oil and gas industry.”

• “I went with 'Don't know' because 'Don't care' (which is the same reaction as most Texas voters) was not an option.”

• “Although I don't normally vote Republican, most of these folks are relatively unknown.  The only one I know of is Rep. Stefani Carter, but she wasn't an effective legislator so I don't know how far that'll carry her.”