ROCKDALE — From a small room in a police station halfway between Austin and College Station, Monica Baxter answers a phone with “911” written on the receiver. A nearby computer screen springs to life, displaying data based on the caller’s phone number. Another shows a map of the caller’s approximate location.

The information is critical for Baxter to determine who is responsible for addressing the situation. Though Baxter works for the Rockdale Police Department, she answers 911 calls for the entire southern half of sparsely populated Milam County.

“If it’s a police [call] that’s outside of our jurisdiction, we would transfer the call to Milam County and they would dispatch their deputies,” Baxter said.

The largest cities in Texas handle their own 911 services. To bring that same service to hundreds of smaller rural communities, state funding is critical.

“We serve 224 of the 254 counties in Texas,” said Kelli Merriweather, executive director of the Commission on State Emergency Communications (CSEC). “Our 911 system covers one-third of the population and 80 percent of the land mass of Texas.”

CSEC oversees the state’s 911 system and its six poison control centers. In the 83rd legislative session, state lawmakers approved a 33 percent increase in the agency's two-year budget, from $110 million to $146 million. Most of the extra money will go toward upgrading 911 system equipment around the state, some of which will help dispatchers like Baxter pinpoint the position of someone calling from a cell phone more accurately. The agency did not receive any money to upgrade 911 equipment during the 2011 session, Merriweather said.

“It’s getting to the critical point where everybody across the state has fairly old and outdated equipment that needs replacing,” she said.

CSEC plans to use part of its extra funding to begin implementing “next generation 911” technology, which includes converting the current statewide analog 911 system to a digital one, a process that’s expected to take six to eight years. Among the advantages of a digital system is fully integrating text messages into the emergency communications that 911 dispatchers receive.

By next year, the four largest wireless companies are expected to provide text-to-911 service throughout the country, which will allow callers to send text messages to 911 wherever a local 911 call center is prepared to receive texts. 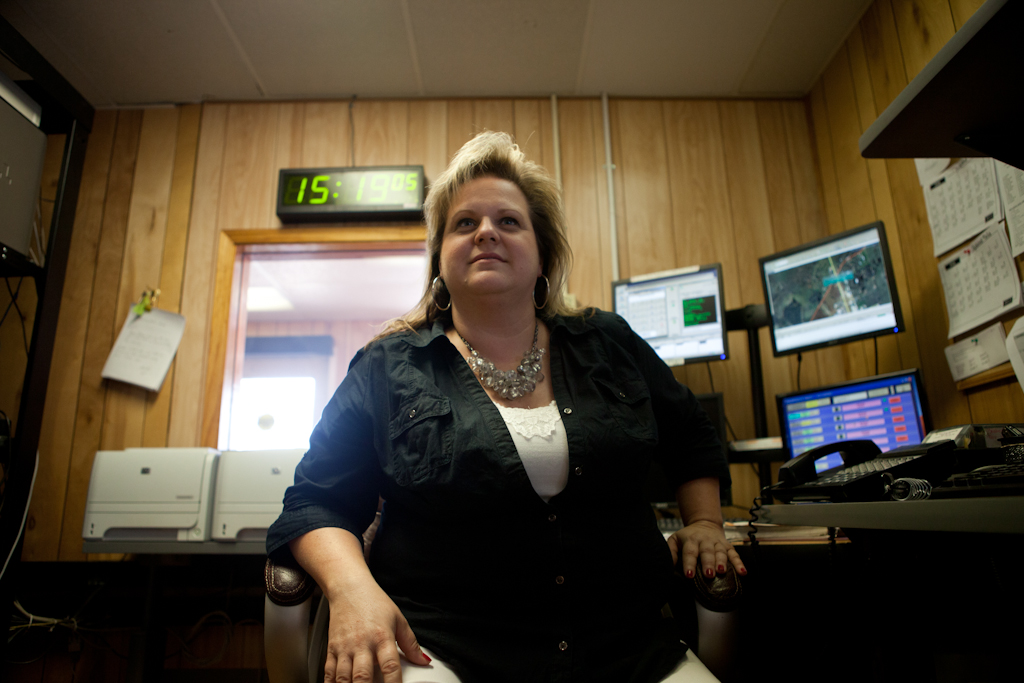 Enlarge photo by: Todd Wiseman
Monica Baxter is the 911 dispatcher for the Rockdale Police Department.

Texans pay separate fees of 50 cents and 6 cents on their monthly bills for wireless and landline phones to fund the agency. Users of prepaid cell phones also pay a 2 percent surcharge on the price of the phone. Over the years, lawmakers have stockpiled much of the money earmarked for CSEC and used it as part of an accounting trick to make state budgets appear balanced. This session, lawmakers agreed to direct more of the revenue to the agency, though the accounts will still hold more than $150 million. Some lawmakers have called for reducing the fees or ending some of them all together.

In Rockdale, the police department received about $40,000 last year in state funding for its 911 system. Without that state support, Rockdale Police would likely only be able to offer an emergency phone number within its own city limits, leaving large, unincorporated portions of southern Milam County without a reliable 911 system, Lt. J.D. Newlin said.

"Small entities like us? We couldn't afford it otherwise," Newlin said.