A campaign video for Dan Branch, a candidate for attorney general, was removed from Facebook on Thursday by mistake, a spokesperson for the social networking site says.

The video ad was removed on Thursday for allegedly violating the site's community standards. By Friday, the video had been restored and Facebook apologized, saying the video was not in violation of the company's standards and that its removal was simply an error — as was as a subsequent 12-hour ban on posting new content placed on the campaign's account.

"As our team processes more than 1 million reports each week, we occasionally make a mistake," the spokesperson said. "We worked to rectify the error as soon as we were notified. We apologize for the inconvenience caused due to the removal of this content, and we have already taken steps to prevent this from happening in the future. Additionally, we have removed any blocks on associated accounts."

Republican attorney general candidate Dan Branch's campaign posted its first web video to Facebook on Wednesday. By Thursday, the video had been removed by Facebook administrators for allegedly violating the company's community standards.

The campaign speculates that the removal stems from objections to a part of the video in which Branch says, "I will fight for our state’s right to protect the unborn and our right to define a marriage as between one man and one woman."

The video was posted by the campaign along with a message encouraging supporters to watch it: "Please take a minute from your day to watch our debut video on why Texas must stand up and fight President Obama and those in his Administration who are trampling on our sacred Constitution." 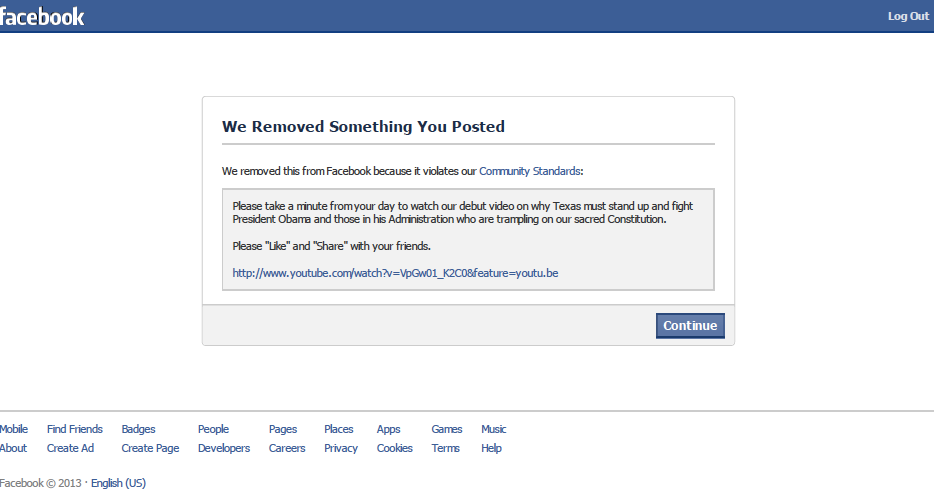 Such standards apparently do not prevent anti-gay marriage groups like "1,000,000 Supporting Traditional Marriage" — which, with fewer than 45,000 "likes" as of this posting, is currently a bit short of its goal — from existing.

"Our campaign has yet to receive an explanation as to why our video was deleted," campaign manager Enrique Marquez told the Tribune via email. "We sincerely hope that Facebook did not remove based on a political bias against Texans who want to fight the Obama Administration and who respect conservative values."