Since the 2012 presidential election, the political future of Texas has been subject to much speculation, given the state’s potential to influence national elections.

Lopsided support among minority voters nationwide for President Obama and Democrats has spurred intense interest in Texas’ booming Hispanic population. Plenty of ink has been spilled on the possibility that Texas could soon “turn blue” if only Democrats can tap the state’s reservoir of Hispanic voters — an electorate that grew by 38 percent between 2000 and 2010. Indeed, U.S. Sen. Ted Cruz has publicly mused whether the Republican Party will go the way of the Whigs if the party continues to lose Hispanics to the Democrats.

What is often missing from those discussions is a clear picture of the current levels of political engagement across Texas’ many diverse populations. Visions of churning out new voters for the next election don’t square easily with the stark picture painted by the Texas Civic Health Index, a new study of Census Bureau data on civic and political participation.

Whether either political party can effectively mobilize such groups depends in large part on whether chronically under-engaged groups develop new civic habits — and whether real incentives are created for them to do so.

The future of Texas depends on this, too. Can Texas engage a larger number and broader range of its citizens to meet the opportunities and challenges that lie ahead? Or will Texas remain a state in which, with anemic levels of participation overall, minority groups are even more acutely underrepresented?

It’s certainly true that Texas is on the leading edge of a nationwide demographic shift that will make the U.S. a “minority-majority” country in the not-too-distant future. Texas reached that status in 2004, meaning that racial and ethnic minority populations, both native- and foreign-born, now collectively outnumber non-Hispanic whites. And Texas is home to nearly one out of every five Hispanics living in the U.S.

But this enormous population is participating at lower levels in almost every measure of political and civic engagement.

Politically, a significant dropoff is evident between whites and Hispanics. In 2012, the census shows there was a 12-point difference between the percentage of Texas’ whites and Hispanics who were registered to vote and more than a 14-point difference in rates of voting. These differences — along with different rates of communicating about politics with elected officials and with others — are not new, as the extensive data from the 2010 census illustrate. 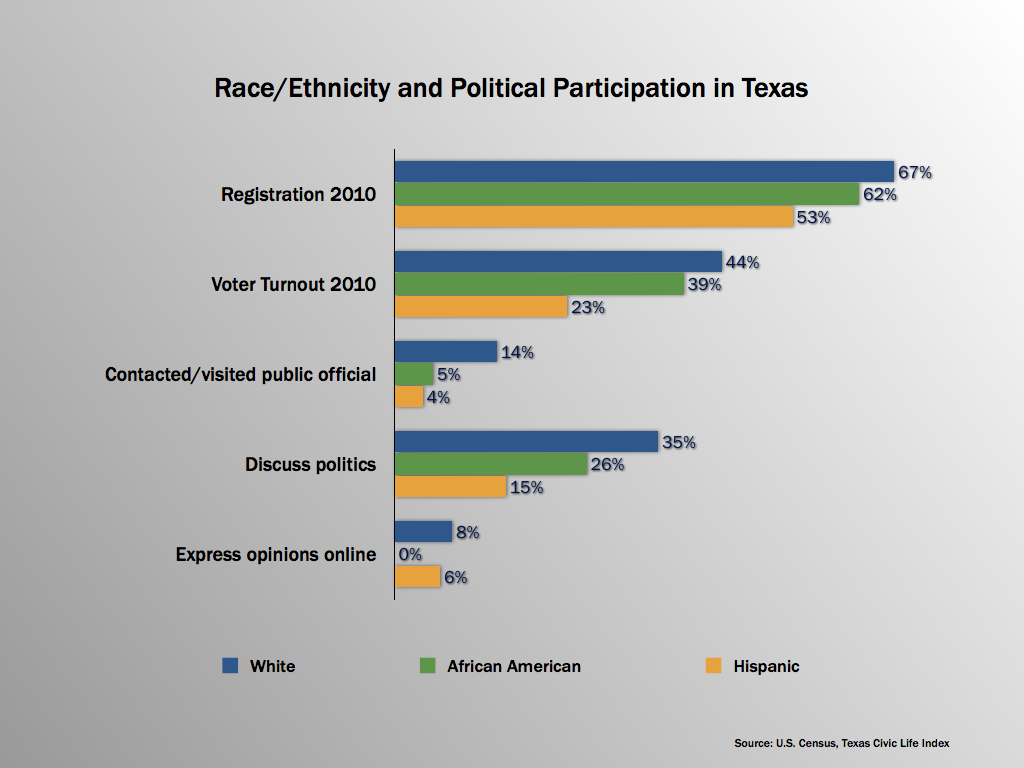 Overall, according to the Pew Hispanic Research Center, although Texas has the second-largest Hispanic population in the U.S., Texas ranks 17th in the share of its Hispanic residents who are eligible to vote (44 percent, versus 78 percent of Texas whites). That gap was significant enough in the 2012 election for an analysis by the Houston Chronicle to conclude that if Texas Hispanics had voted in equal rates with the state’s white voters, and if Hispanic nonvoters were to break for the same party as Hispanics who did vote, Texas would already be “purple.”

In part, the participation gap is because of the large number of Texas Hispanics who are younger than 18, and in part because of citizenship status. But the gap may also be due to the same factors that may be depressing turnout in our state overall, including the lack of strong party competition, weak voter mobilization efforts and a statewide ethos of deference to elites.

These findings suggest that efforts to mobilize Texas’ minority voters face the considerable challenge of building new habits of engagement among the chronically disengaged. This will involve changing the political, social and economic environment that has helped to produce those habits.

In part, the challenge is one of socioeconomics. Income and education are strong predictors of participation, and being African-American or Hispanic is unfortunately correlated with a higher likelihood of poverty and lower educational achievement — in Texas and across the country. Racial and ethnic minorities have less access to the resources that facilitate participation in public life.

The challenge is also one of acculturation. About one-third of Texas’ Hispanic residents are foreign-born. Research has found several factors that determine whether naturalized citizens will vote, including their length of time in country and the strength of democratic institutions in their home countries. How best to integrate these new and potential citizens into the life of the state is not necessarily clear. In fact, some experts argue that the longer new residents stay in the U.S., the more their interest and engagement in political life declines. If the political culture of their new home is unappealing, immigrants may keep their distance from the civic life of the state.

Efforts to improve civic engagement among the state’s racial and ethnic communities are not doomed to fail, however. For example, naturalized citizens appear to be more engaged than their native-born counterparts when it comes to charitable giving: 53.1 percent of naturalized citizens say they have recently donated to charity, compared with 48.6 percent of native citizens. This finding may be indicative of the stronger social ties that are required in order for immigrants to move to the U.S. and establish themselves — networks that may be opportunities for building other forms of civic engagement.

It’s also crucial to realize that many Texas residents haven’t really been invited to participate. Recent evidence suggests that, compared with their counterparts in other states with sizable Hispanic populations, Hispanic voters in Texas were significantly less likely to say they had been contacted by a political campaign, party or community organization in the 2012 election season.

Whether Texas will turn blue is an important question, but more consequential is the question of how to build the attitudes and habits of sustained political and civic engagement among all of Texas’ under-engaged eligible voters. Fostering a greater sense of civic ownership among all Texans is the real challenge.