In the final days of the regular legislative session, a plan to issue billions of dollars in bonds for campus construction died in a legislative game of chicken.

Unless the issue of “tuition revenue bonds” — so called because tuition is used to secure the bonds, though general revenue is used to cover the debt — is revived during a special legislative session, 60 major construction projects at public institutions of higher education throughout Texas will likely be delayed for at least another two years.

Legislators haven't authorized a round of TRBs since 2006, and the wish list for new buildings has been growing, along with university enrollment.

To provide a better sense of what the delayed funding means for Texans' alma maters and local public universities, the Tribune has created an interactive explorer with details on how each project stood — or could stand — to benefit from different versions of TRB legislation.

For each item, the explorer shows the amounts the projects would have received from the two options that lawmakers left on the table at the end of the regular legislative session. It also shows the amounts included in proposals filed during the special session. Gov. Rick Perry has yet to add the funding issue to the special session agenda, so for now, those proposals remain on the back burner.

It is important to first understand exactly what happened in the Capitol during the final week of May.

The Senate had approved a bill with roughly $2.4 billion in bonds, and the House had returned the bill with nearly $2.7 billion in bonds. At that point, the Senate could have accepted the changes made in the House, or the differences could have been worked out in a conference committee of legislators from both chambers.

Noting that differences in amounts and methodology between the two versions of Senate Bill 16 gave senators pause, state Sen. Judith Zaffirini, D-Laredo, summed up her take on the situation: "The Senate expected the House to appoint conferees, which is the process, and the House expected the Senate to concur, which wasn't going to happen."

Ultimately, nothing happened. As the final deadlines neared, Zaffirini indicated that a compromise had been reached and was ready for quick approval. But House legislators chose instead to wait for the Senate to accept their version. On the final day, after hours of backroom wrangling, both chambers adjourned without addressing the matter.

In the quickly called special session, multiple bills that would issue tuition revenue bonds have already been filed.

“Given the interest rate on bonds, if money’s going to be borrowed, this is probably the best time for the next 20 or 25 years,” said Seliger, who has in previous years expressed discomfort with the debt associated with tuition revenue bonds.

“These are some buildings the universities are really going to need,” Seliger said, “and in the fairly near term, because there’s going to be a great deal of demand for growth.”

Some projects are considered particularly necessary. 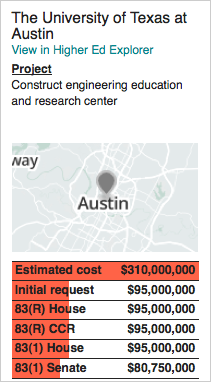 The university and the University of Texas System Board of Regents have already lined up most of the money for the $310 million project. But Greg Fenves, the dean of UT-Austin’s engineering school, said the $95 million in bonds the university requested for the project are “critical.” State Sen. Kirk Watson, D-Austin, has filed a bill issuing bonds for only that project.

In the visualization on the right, you can see that had either of the two options been successful at the end of the regular session, the project would have received the same amount under the House version of SB 16 and the Senate’s proposed compromise, which was obtained by the Tribune.

It would receive the same $95 million under the current version of HB 10 in the special session, but slightly less under the current version of SB 11. You can also see the total cost of the project, according to the Texas Higher Education Coordinating Board, as compared to how much the university initially requested in aid from tuition revenue bonds.

“We don’t really have an immediate plan for how we’ll be able to get started without the support of TRBs,”Fenves said, indicating he hopes to start the project this summer.

He also highlighted Texas A&M University San Antonio's primary science and technology building, which is 12 miles away from its current campus. System officials are hoping bonds will help to construct a more central location. 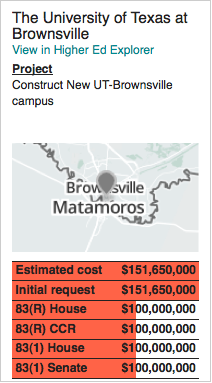 Then, there is the plight of the University of Texas at Brownsville, which is in the process of building a new campus after splitting from Texas Southmost College, a two-year college. The two schools had operated as a combined institution on land owned by TSC.

“The fact is, I have students already at the door who won’t have space when our lease is up with TSC,” UT-Brownsville President Juliet García said.

Both the House version of SB 16 and the proposed compromise circulating in the Senate in the session’s final hours included $100 million in bonds for the campus.

“I need that money yesterday, so I can build for students — not ones that I’m going to have, but that I already have,” Garcia said.

Perry has said that before he adds a topic to the special session agenda, he wants to be assured that lawmakers’ efforts to address it will be successful.

Seliger said, “Based on the input I’ve gotten from members, while it’s probably not unanimous, there’s widespread interest in getting things done.”