In December 1999, Daniel Nagle, a correctional officer, stood on the Texas Capitol steps, leading a rally to ask lawmakers for a pay raise for his fellow prison employees. His union had been at odds with the prison administration for months over whether a staffing shortage was compromising safety.

“Someone will have to be killed,” he said at the rally, “before the Texas Department of Criminal Justice does anything about the shortage of staff in Texas prisons.”

Two weeks later, Nagle was fatally stabbed by an inmate while working at the McConnell Unit in Beeville. “There was nobody there to call for help,” said his sister Della Nagle. “It was just him and the inmates.”

Officials of the prison workers' union, a chapter of the American Federation of State, County and Municipal Employees, including Nagle’s former colleagues, said that understaffing and low pay continue to put officers in danger today. The Texas Department of Criminal Justice, which runs Texas prisons, counters that all of its critical security positions are filled. And the inmate convicted of Nagle’s murder says the staffing issues created a situation that was ripe for corruption and led him to being framed.

Robert Pruett, 33, was convicted in 2002 of Nagle’s killing and is scheduled to be executed on May 21. In a recent interview, he maintained his innocence and said that inmates and corrupt officers colluded to blame him for the murder. Prosecutors convinced a jury that Pruett murdered Nagle after a dispute over a disciplinary write-up.

“I was easy to blame,” said Pruett, who was 20 at the time of Nagle's death, serving a 99-year sentence for being an accomplice in the murder of a neighbor by his father when he was a teenager.

Lance Lowry, president of the union, said Nagle’s murder “exemplifies what's going on now with staffing shortages and why we need to maintain a staffing level.” 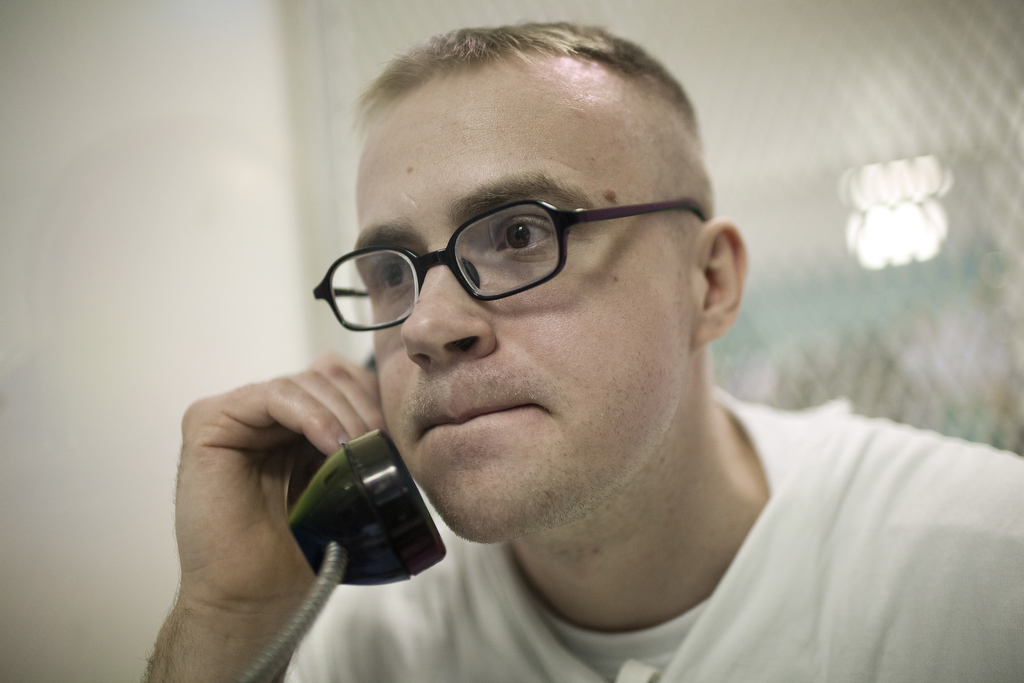 Enlarge photo by: Tamir Kalifa
Robert Pruett is scheduled to be executed on May 21 for the murder of correctional officer Daniel Nagle. He says he was framed by corrupt guards and inmates..

The number of inmates in Texas prisons more than doubled between 1990 and 1999. According to TDCJ statistics, assaults on staff members at Texas prisons deemed “serious” have risen in recent years, to 96 in 2012 from 72 in 2010. Last year was also a 10-year high for deaths of inmates at the hands of other inmates — there were 11 — although other statistics, including the confiscation of fewer weapons and a decrease in assaults among inmates, suggest that violence is down. The last time an officer was killed by an inmate was in 2007.

John Hurt, a TDCJ spokesman, said that the department is running with a staffing shortage, but that all “critical security positions are filled.” He said that since Nagle’s death the department has implemented new measures including body alarms, video surveillance systems and stab-resistant vests.

"Daniel Nagle paid the ultimate price to keep the citizens of the state of Texas safe,” Jason Clark, another spokesman for the department, wrote in an email. “His sacrifice will never be forgotten."

Union leaders and prison officials agree that the shortage in certain parts of the state is partly due to the growth of the oil and gas industry in South and East Texas, which has created private sector jobs that compete with prisons for workers. “They can go out and drive a truck for twice as much as they’d make in the prison,” Lowry said.

Correctional officer pay starts around $27,829 per year, with incremental raises up to roughly $37,037. The annual staff turnover rate is currently 24.7 percent.

To reverse the trend, prison officials offered a $3,000 bonus last year to new correctional officers in areas where the oil and gas boom had created the most competitive hiring environment. They are working with state lawmakers to include a 5 percent pay increase for correctional officers in the budget, which would cost taxpayers $105.2 million. “We’re never going to be able to compete financially with the private sector,” Hurt said.

But Lowry said the current proposals are insufficient. “I think Daniel was right. It’s going to take more people getting killed,” he said. “Those words haunt me every time I walk up the Capitol steps.”

In the death of Nagle, the lack of other guards nearby meant that the only witnesses were inmates. Pruett said his lawyers could not adequately investigate the theory that inmates were bought off by prison officials to testify against him. Although he conceded that his suggestions sound like a conspiracy theory, he said that further investigation would find evidence of deals between inmates and guards to frame him.

At Pruett’s 2002 trial, prosecutors told a Corpus Christi jury that Nagle told him he could not eat a sandwich in the recreation area, and filed a disciplinary report. They said that Pruett returned that afternoon and stabbed him with a sharpened metal rod. The disciplinary report was found ripped up, near Nagle’s body.

No biological evidence tied Pruett directly to the crime scene, and inmates who witnessed the crime offered conflicting testimony. One inmate, Kevin Veschi, stated at the trial that after he agreed to testify in favor of Pruett’s innocence, his showering and recreation privileges were revoked. 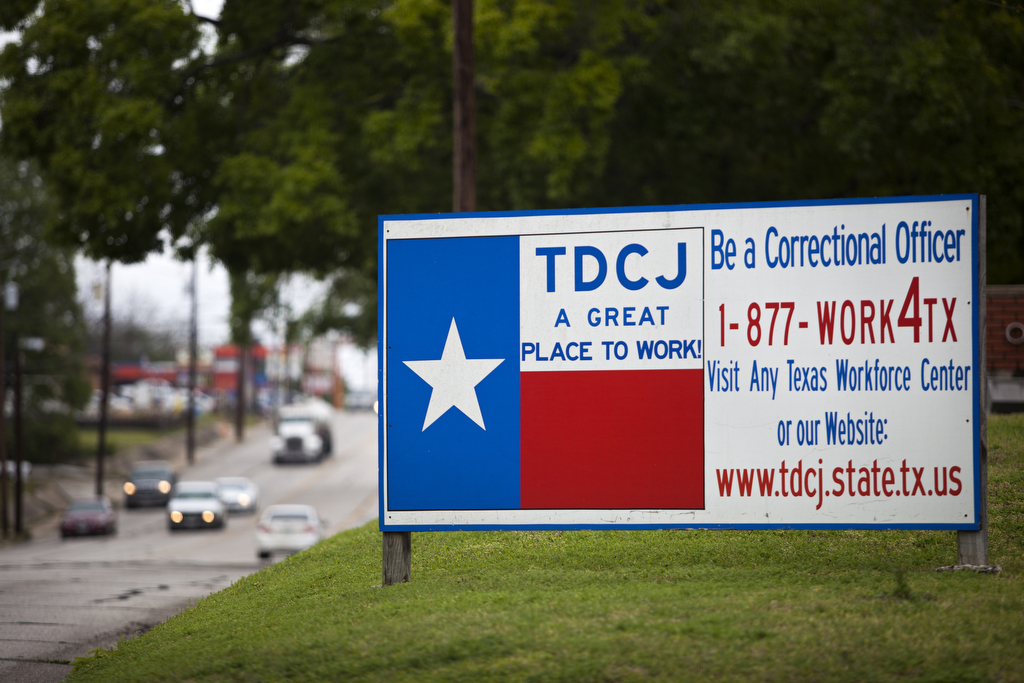 Enlarge photo by: Tamir Kalifa
Last year, Texas prison officials approved a $3,000 bonus for correctional officers in units where a boom in oil and gas jobs has made it hard to find new hires. They are currently working with state lawmakers to grant all correctional officers a 5 percent pay increase..

At the trial, Pruett’s lawyer suggested that Nagle might have reported the names of officers who cooperated with prison gangs to smuggle drugs into the facility to internal investigators, and that this would have been a motive for corrupt officers and inmates to have Nagle killed. Thomas Prasifka, then the warden of the McConnell Unit, said that Nagle was not formally involved in a corruption investigation, but may have given the names over. The judge called the whole matter “nothing more than speculation.”

Earlier in 1999, gangs at the McConnell Unit had been blamed by prison officials for a series of stabbings.

And in February of this year, federal officials indicted 17 correction officers on charges of smuggling cellphones into the McConnell Unit, which were used by gang leaders to organize criminal activities outside the prison. Federal officials referred in their indictment to a “culture of corruption” in the unit.

“This is 13 years after, and they are still corrupt over there,” Pruett said.

Lowry and Hurt both acknowledged that there had been corruption among officers at the unit. Lowry said that was a result of high turnover among officers. “You get these employees in there, and they have no intent on staying,” he said. “It allows corruption to flourish.”

Brian Olsen, the executive director of the union, said of the killing, “We always thought it might be a hit related to the information Nagle was giving. We don’t know that for sure.”

Olsen asserted that the problems of corruption and violence in Texans prison would be greatly reduced by increasing pay and solving staffing shortages. He said Nagle’s 1999 speech was still a major inspiration as he continued to lobby, and that little has changed. “We’re back to that point,” he said.