Among all the issues in contemporary American politics, few split Americans along geographical lines as much as gun control. But no less important than the geographical divisions evoked by the gun debate are the ones that relate to gender. The results of the latest UT/Texas Tribune Poll, which asked a variety of questions about recent gun-related proposals at both the state and national level, confirms a pattern in public opinion that may conform to the experiences of many readers: Rural men and urban women are on opposite ends of the spectrum when it comes to attitudes on gun policy. We may not be talking about Mars and Venus, but we’re close.

The figure below shows how respondents from these different geographies break down on one of the main gun control proposals being discussed today — a nationwide ban on magazines that hold many rounds of ammunition. As can be seen, the greater the population density of the place in which a respondent lives, the more likely it is that he or she will support a ban on the sale of high-capacity magazines. In fact, results for the two densest geographies constitute what is almost a mirror image of results for the two least populous categories; a 17-point gap in opposition to the ban among respondents from small town/rural ZIP codes stands in contrast to a 22-point gap in support of the ban among respondents from inner suburban/big city ZIP codes. 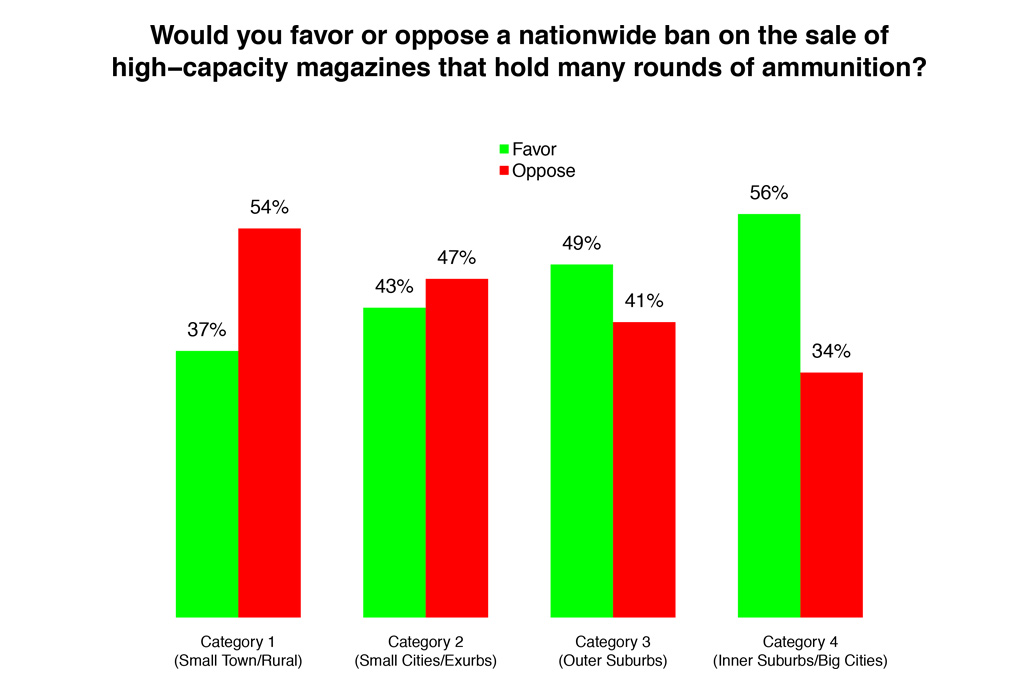 More interesting, however, is the way in which geography interacts with gender to explain even more of the variation in opinions. Below, I present results for the same relationship discussed above, but this time I’ve separated male and female respondents into different figures. In both figures, the basic trend across geographical categories is the same — the higher the population density of his or her ZIP code, the more likely a respondent is to support a ban on high-capacity magazines. But across each of the four geographical categories, women are far more likely than men to support such a proposal. Indeed, the gender differences tend to be slightly more pronounced than the geographical ones. For example, whereas male respondents residing in small town/rural ZIP codes register a 40-point gap in opposition to a high-capacity magazine ban, female respondents in the same category only register a 6-point gap in support of it. This difference between men and women within a single geographical category is larger than any of the differences across all the categories. A similar observation could be made about the difference between men and women within the inner suburban/big city ZIP codes category. 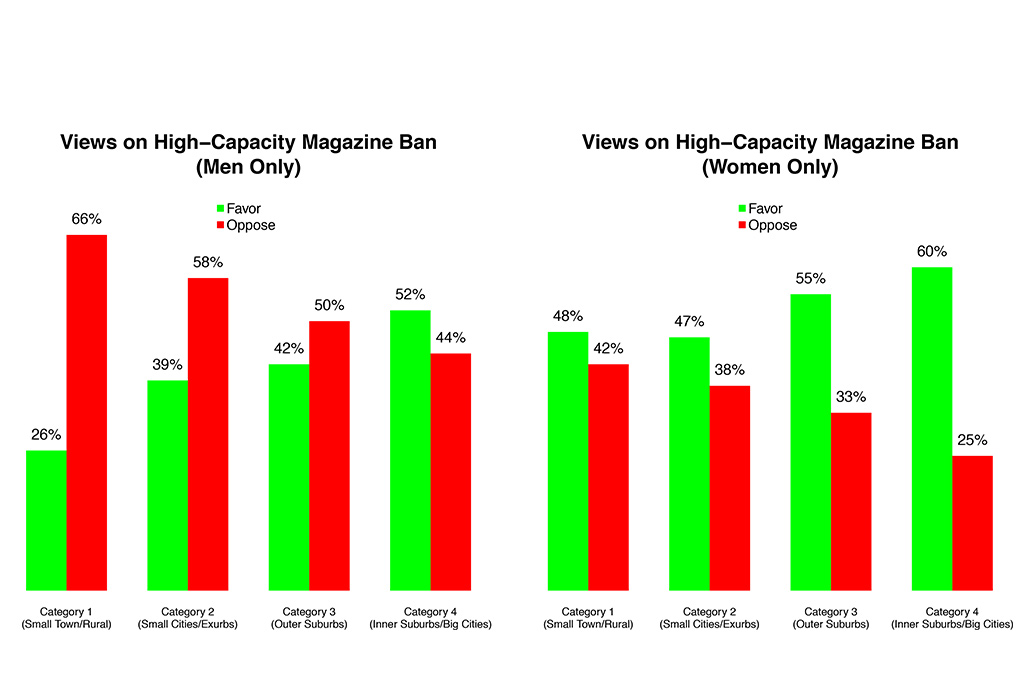 Thus, in Texas at least, geography appears to have a strong influence on support for gun regulations, but the subgroups that form through the interaction of geography and gender are a far more incisive way to analyze opinion on the issue. Ultimately, the simplest way to describe differences of opinion on gun control within Texas may be to point to the two subgroups that are most strongly opposed to each other on the issue — men from the state’s lightly populated areas and women from its urban cores.