On February 27, the U.S. Supreme Court will hear a challenge to Section 5 of the Voting Rights Act of 1965, the provision of that landmark civil rights law that requires Texas and eight other states, as well as several local entities in other states, to receive federal “preclearance” for changes to their “voting practices and procedures.” We asked Texans about federal oversight of the election process in the October 2012 University of Texas/Texas Tribune Poll.

In the lead up to that survey, the application of Section 5 had been prominently discussed amidst the state’s unsuccessful efforts to win preclearance of the voter ID law and the redistricting plans devised by the Legislature. As Julian Aguilar wrote here last month, Attorney General Greg Abbott’s criticisms of the preclearance process escalated when he joined an amici brief supporting the argument that Section 5 is unconstitutional. While neither Texas nor Abbott have starring roles in the case before the Supreme Court, the decision could have profound practical consequences in Texas elections.

In October, we asked Texans about their views on preclearance using wording that assumed that most people aren’t familiar with the specific provisions of the Voting Rights Act. To get at attitudes on the issue at hand, we phrased the question this way:

As you may know, some states have a history of discrimination in their election laws. Because of this, they are required to request federal approval before implementing any changes to their voting procedures or election practices.

Do you think these states should still be subject to federal supervision, or do you think they should be able to change their voting and election practices without the approval of the federal government?

• These states should still be under federal supervision

The overall results suggested more support for “federal supervision” than one might have expected in the 10th Amendment-loving, get-the-federal-government-off-our-backs political climate in Texas. A slim majority of our respondents went for continued supervision of the state, and by a sizable 15 percent margin. It might seem that the Attorney General didn’t have much of an audience for his opposition to Section 5. 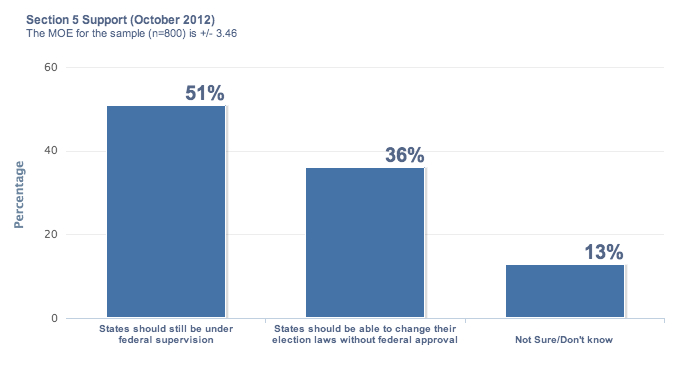 Breaking the results down by partisanship tells a subtler story. Support for preclearance practices is overwhelming among Democrats — only 9 percent of Democrats support state autonomy over election laws without federal supervision, perhaps a convenient back-of-the-envelope guess at the number of old-school states rights Democrats left in the party. 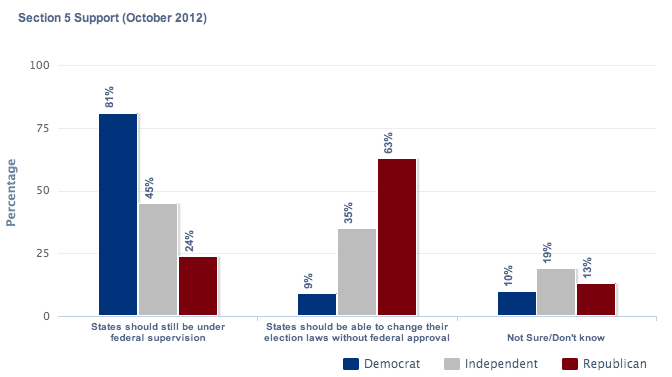 These patterns of support add up to the slim 51 percent majority of overall support for continued federal supervision. But with 63 percent of Republicans opposing preclearance, Abbott certainly has a choir eager to hear him preach.

It’s worth noting that there are a lot of ideologically loaded subjects wrapped up in this policy question, which touches on attitudes about the federal government, local autonomy, and, of course, race. (You can see additional breakdowns by race and ideology at the Texas Politics Project website.) We suspect that minor changes in wording might reveal different subtleties in opinion here; stay tuned for more on this in the next UT/Texas Tribune Poll.