CLEVELAND, Texas — As Christopher Holbert danced down the aisle of a Cleveland Correctional Center classroom, dozens of other prisoners in matching dark blue scrubs flanked him, clapping and cheering in a deafening roar. When he reached the front of the classroom, he spoke for 10 minutes on his business plan for "Adrenaline Indoor Paintball," an idea he has worked on over the last year.

With three investors lined up, he plans to create the company when he returns to the Dallas area. But first he has to finish his three-year sentence for arson.

“I used to be complacent,” Holbert said. “Without prison I would have never known how to start my own business.”

Holbert, 39, is one of more than 100 students in the Prison Entrepreneurship Program, an initiative organized by a Houston nonprofit of the same name that teaches business skills to prisoners who will soon be released, including market research, finance and professional etiquette. Inmates across the state can apply, and those accepted are transferred to the Cleveland Correctional Center, which houses the program.

While in the program, each participant gets a “sweet name” — like Smiley Cyrus, Richard Simmons or Milli Vanilli — to “de-gangsterize” them and make them more comfortable speaking to a large group. (Holbert, who is known in the program as “Porky Pig,” included the animated character's "That’s all folks!” catch phrase in his introduction.)

"We're trying to convince these guys that they are not the toughest guys in the world,” said Jeremy Gregg, the program’s chief development officer. “They have a very fragile sense of self, and we need to rebuild that."

Last month, the program began a partnership with the Hankamer School of Business at Baylor University to offer each inmate who completes the course of study a certificate in entrepreneurship. Although the course of study is not changing, organizers say, the partnership adds credibility and an added incentive for the students to excel.

Gary Carini, associate dean of the Graduate Program in Management and Entrepreneurship at Baylor’s Hankamer School of Business, serves on the governing board for the entrepreneurship program and was so impressed with the curriculum that he persuaded the university to give a certificate to every graduate.

“What impresses me the most is how these men not only complete this very rigorous program within a prison,” he said, “but they do so while completing a full business plan for a real venture that they can launch after release from prison.”

More than 5,000 inmates apply each year, and 120 are selected for the program. “We ask, 'Is the man genuinely committed to change?'” said program CEO Bert Smith. “The second is, 'Do we believe, based on everything he's done before, he's got a strong work ethic?'"

After three months of classes in character development and computer skills, the prisoners form business plans during six months of entrepreneurship classes and pitch their ideas of businesses to teachers and one another in a scene reminiscent of the ABC show Shark Tank. 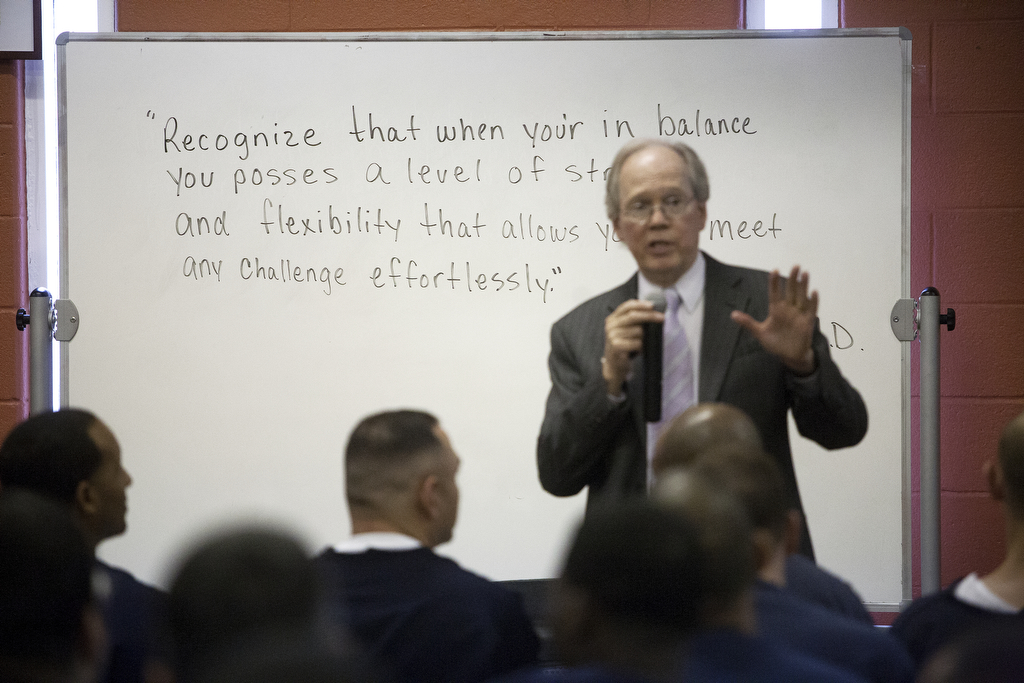 Students in the program, which started in 2004, make up two-thirds of the facility's population. Over the next year, the program plans to fill all of the unit’s 520 beds with students and graduates.

Program officials say they raise up to $2 million yearly from private foundations and individuals, and they estimate that the program saves the state roughly $6 million in reduced recidivism, because less than 10 percent of its graduates return to prison within three years, compared with a national average of 50 percent.

But that doesn’t mean it would work for everybody in prison. “Part of it is probably that inmates who are interested are those already committed to changing their lives,” said Marc Levin, a criminal justice researcher with the Texas Public Policy Foundation, a conservative think tank. “There hasn't been a control group study."

Smith, the program’s CEO, said that although they pick the prisoners most likely to succeed, they have found that men accepted to the program but do not attend return to prison as often as anyone else.

Reaction to the program has been nothing short of glowing in the business community. “These guys have been really good salesmen when it comes to selling drugs and stolen cars,” said Mabrie Jackson, CEO of the North Texas Commission, a regional business association. “So how do you take that skill and transform it into a sustainable career within the law? The creativity is astonishing.”

“Studies have shown that vocational education reduce recidivism more than anything else you can do,” Levin said. “You get the most benefit if there's a connection to jobs available in the workforce.”

Prisoners are using the program to delve into a variety of fields. Shawn Evans, two years into his four-year sentence for driving while intoxicated, plans to start a website where people can design custom blankets for babies. Others want to sell vending machines with healthy products and work as party entertainers.

Texas lawmakers are reviewing proposals to ease the barriers that former inmates face when trying to get vocational licenses. State Rep. Senfronia Thompson, D-Houston, has filed House Bills 799 and 797, which would require the Windham School District — which operates within the Texas Department of Criminal Justice —  to provide more information for prisoners before they enroll in a vocational program about what licensing restrictions they will face when they leave prison. HB 1188, also by Thompson, would relieve employers of liability if they hire a former inmate who commits a crime.

“There are a lot of companies that understand the redemption of the individual, but they don’t want to get sued,” explained Jorge Renaud, a former prison inmate who now analyzes policy for the Texas Criminal Justice Coalition and worked on the liability bill. 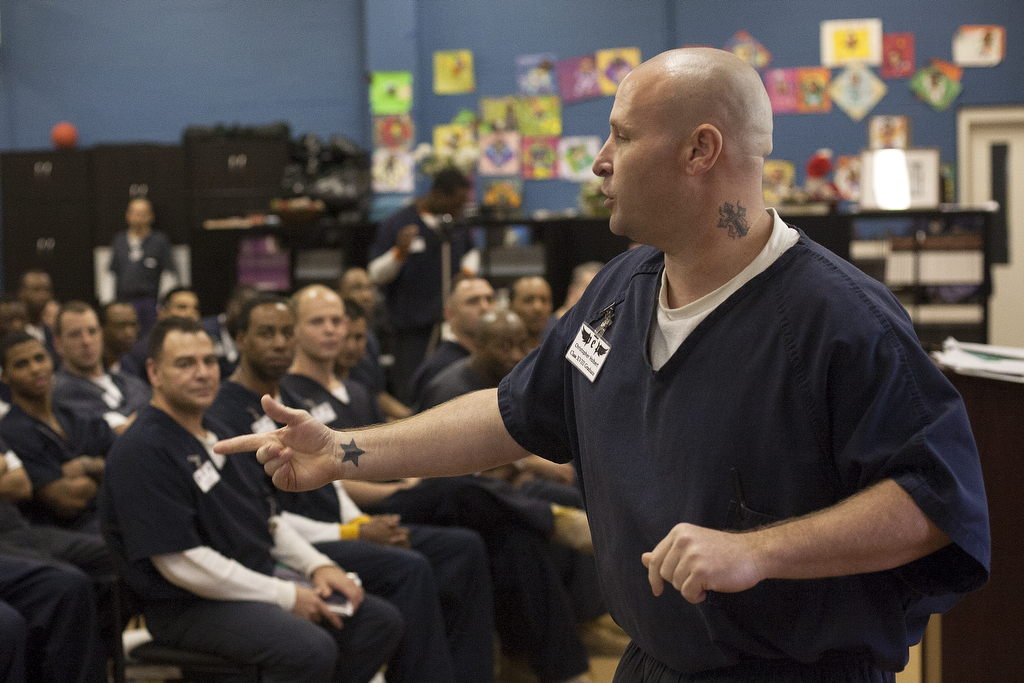 Enlarge photo by: Tamir Kalifa
Cristopher Holbert delivers his business plan to other students in the Prison Entrepreneurship Program.

“It's really a public policy question,” said Smith, who in addition to his work as program CEO teaches a weekly class on business and marketing skills to the inmates. “How do we weigh the concerns about exposing citizens to a greater risk of criminal activity versus how do we serve the public by helping with the re-entry?”

The program also operates transitional houses in Dallas and Houston that most of the graduates live in for two to three months after release. Gregg, the chief development officer, said that the biggest challenge is to keep the program’s graduates accountable once they are released.

“If all we do is train them on the inside, pat them on the back, and say good luck to you,” Gregg said at a conference last year, “there’s a good chance we are going to train a drug dealer how to leave prison with a better marketing strategy.”

Asked how they plan to deal with questions from potential customers about their pasts, several students said they hope honesty would trump the stigma of having been in prison.

“You’ll get their confidence by telling the truth,” said Ricardo Blanco, who is serving a 13-year sentence for manslaughter and kidnapping.

Patrick McGee, a graduate who now works for the program, founded Pat’s All-Purpose Cleaning in Humble after his release. He served more than 17 years for murder, but now, he said, the more common question he gets from clients is, “You were really in prison?”

His “sweet name” was “Precious.”

Many of the inmates also said they would be held accountable by family. Holbert is starting his paintball business, in part, to support his 12-year-old daughter.

Toward the end of his speech about paintball, Holbert stumbled, forgetting the next part of his presentation. The crowd, which had been totally silent, started to encourage him. “You can do it!” someone shouted repeatedly, slowly overtaken by the cheers of the rest, until Holbert broke into a smile. “It’s up to you,” Mr. Smith, the teacher, explained later, “but you’re not alone.”