Growing up in the 1960s, Ken Anderson had admired the great trial lawyers movies: Gregory Peck in To Kill A Mockingbird and Spencer Tracy in Inherit the Wind. The good guys who broke down lying thugs on the stand.

“In reality, I don’t see much brilliance in the courtroom,” he wrote in his 1997 book Crime in Texas, Your Complete Guide to the Criminal Justice System. “Trials are won and the truth is exposed because of detailed, painstaking preparation done before the first witness is sworn in.”

In 1985, at age 33, Anderson followed in the tough-on-crime footsteps of his predecessor and boss Ed Walsh to become the Williamson County district attorney. He held that job for more than 16 years before Gov. Rick Perry appointed him as a district judge in 2001. In those years, Anderson prosecuted hundreds of criminals, earning a reputation for persuading juries to assess harsh penalties.

One of those cases has come to define Anderson over the last year and a half as the antithesis of the truth-seekers he admired in the movies. He will sit at the defense table Monday, facing a rare court of inquiry. It will determine whether Anderson, now 60, should face criminal charges for his role in the wrongful murder conviction of Michael Morton, the grocery store manager who served nearly a quarter-century in prison for murdering his wife before DNA testing led to his exoneration in 2011.

Morton’s lawyers allege that Anderson withheld key evidence that not only pointed to the young father’s innocence but that allowed a murderer to remain free.

Anderson, who declined through his lawyer to be interviewed for this story, has contested allegations of wrongdoing and has said that he is sick over the wrongful conviction. And those in the Central Texas city of Georgetown, who have known Anderson over the years, say they can’t believe that the church-going Boy Scout troop leader — who tried to steer young people who veered into his courtroom onto a productive path — could do the unethical things he’s accused of doing. Even some defense lawyers who sparred with Anderson in the courtroom say allegations that he behaved underhandedly are hard to fathom.

“I never thought of him as acting unethically or in violation of the rules,” said veteran defense lawyer Roy Minton. “I did think of him as being very strong and hard on crime, but that was the history of that county.”

In Georgetown’s small courthouse circles, there are different ideas about who may have contributed to the injustice that befell Morton.

A former Texas Ranger, Boutwell became famous in 1966 when Charles Whitman went to the top of the University of Texas tower with three rifles and a sawed-off shotgun and fired at students and faculty. Boutwell flew an airplane over the campus, distracting Whitman with gunfire long enough for officers on the ground to take him down. Boutwell cemented his reputation in 1983 when he and a task force of officers extracted hundreds of murder confessions from Henry Lee Lucas. After Lucas was sentenced to death, then–Attorney General Jim Mattox issued a report that dismantled many of the confessions and concluded that the drifter wasn’t even in the same state when some of the killings were committed. In 2001 — eight years after Boutwell died of cancer — then-Gov. George W. Bush commuted Lucas’ death sentence to life in prison.

Parker McCollough, a friend of Anderson’s who would later become a state legislator, represented Lucas during that high-profile trial. It was one of many cases in which he sat across the courtroom from Anderson, who was then an assistant prosecutor.

“He was a very thorough prosecutor who took his job seriously,” McCollough said. “I took it that that was the focus of what he was doing with his life at that particular point in his life. He was extremely conscientious.”

“He had more control over the courthouse attitude than any DA did back then,” Minton said.

At the time of Morton’s trial, Boutwell was regarded as a “lawman’s lawman,” Anderson wrote in his book. “We had a common purpose. We believed we really could make Williamson County a safer, better place for our neighbors to live in.”

Boutwell’s influence spread from the courthouse to politics, too. Politicians ranging from candidates for local office to the governor sought his approval. During Ann Richards’ 1990 gubernatorial campaign, Boutwell grilled the candidate about her personal history and political views before giving his blessing. Then, he escorted Richards on visits to sheriffs across the state, urging them to support her.

“Boutwell was always talking about what politics ought to be and how tough he was on crime,” Minton said.

When Christine Morton was found beaten to death in her bed on Aug. 13, 1986, Boutwell was among the first to arrive on the scene. He informed Michael Morton, when he arrived home from work, that his wife was dead and immediately read him his Miranda rights. Morton has said Boutwell treated him with suspicion from the start, a feeling fueled by an unpleasant note he had left for his wife expressing disappointment that she had fallen asleep during a romantic interlude the night before — his birthday. About six weeks later, Morton was arrested and charged with his wife’s murder. 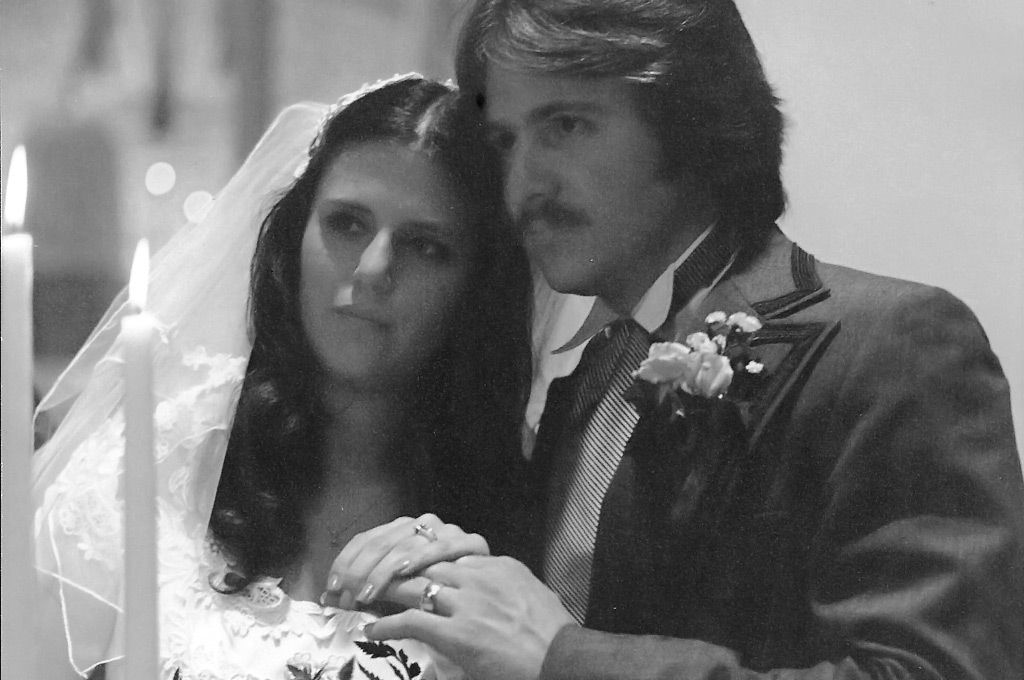 In Crime In Texas, Anderson described how he and Boutwell meticulously pieced together “circumstantial murder cases,” plotted undercover operations and made plans to help crime victims on coffee-stained napkins at the L&M Café in Georgetown.

"Perhaps no sheriff and district attorney had a closer working relationship than Jim and I had," he wrote.

In 1987, Morton was convicted and sentenced to life in prison.

“Life in prison is a lot better than he deserves,” Anderson told newspaper reporters.

While Morton was in prison, Anderson’s legal career blossomed. In 1995, the Texas County and District Attorneys Association named him “Prosecutor of the Year.” He wrote books about famous Texas characters, including former Gov. Dan Moody, President George H.W. Bush and baseball great Nolan Ryan. He had set a goal to become a judge by age 50, which he accomplished with five months to spare.

He has made some controversial decisions on the bench, including a 2003 case in which he refused to allow the temporary release of a 17-year-old girl in a boot camp so that she could have an abortion with the permission of her mother. His decision was later overturned.

“You don’t get a lot of feedback when you’re a judge, and what little feedback you get, you take with a grain of salt,” he told the Austin American-Statesman in a 2003 story marking his first year on the bench. “When you’re a judge, all your jokes are funny and people say nice things to you.”

As a judge in juvenile cases, Anderson became known for his efforts to redirect youths who strayed from the straight-and-narrow. As a prosecutor, he had established Williamson County’s DARE program and a children’s advocacy center.

Those who know Anderson say his personal life was exemplary, too. He and his wife teach Sunday school at Palm Valley Lutheran Church in Round Rock. Recent photos on Facebook show him on a church mission trip in El Salvador. Despite his demanding legal work, Anderson also made time to be a leader in his youngest son’s Boy Scout troop, taking the boys on tours of the Capitol and the University of Texas at Austin campus. He also took them on camping trips and stayed active in the troop after his son completed his Eagle Scout badge. 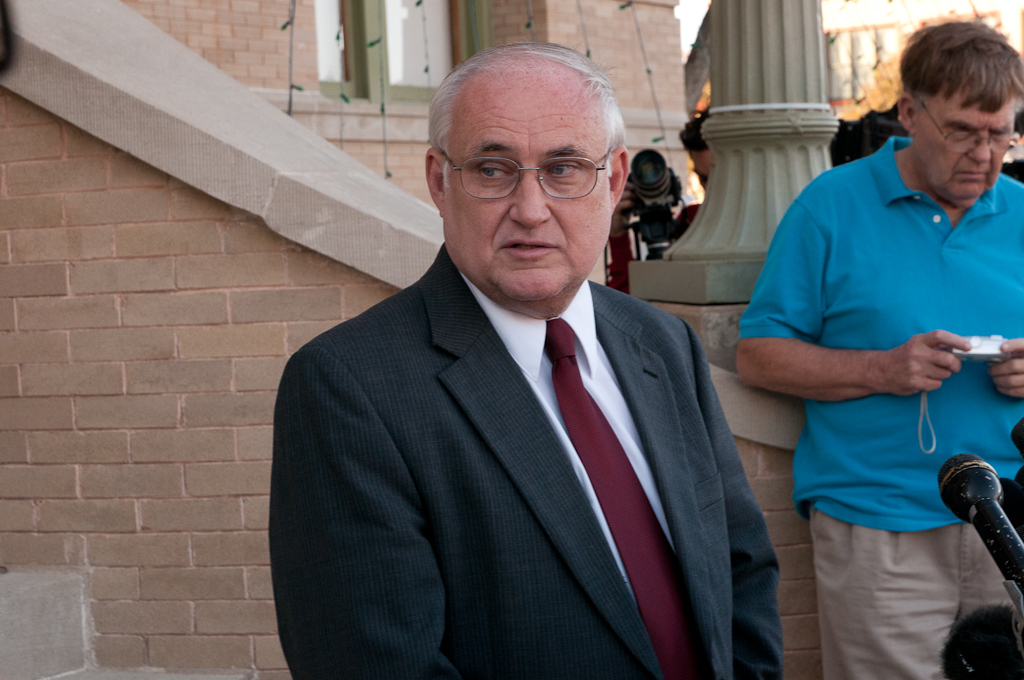 Enlarge
State district Judge Ken Anderson speaks to reporters about the Michael Morton case and apologizes for the system's failures in the case.

“He is a very caring and honest individual who is concerned about other people but doesn’t seek a lot of publicity,” said Calvin Gray, another leader in Boy Scout Troop 405.

When the results of DNA testing showed Anderson and Boutwell’s theory about Morton a quarter-century earlier was wrong, Anderson became the center of a national debate over prosecutorial accountability. During their investigation of the case, Morton’s lawyers, John Raley of the Houston law firm Raley & Bowick and Barry Scheck and Nina Morrison of the New York-based Innocence Project, discovered evidence in the files of Anderson and Boutwell that they allege were deliberately kept from defense lawyers and the judge.

Among those items was a transcript of a phone call in which Morton’s mother-in-law recounted to police a conversation with her 3-year-old grandson, who said he saw a “monster” beat his mother to death. He said his father was not at home when the beating happened. Defense lawyers also found a report that Christine Morton’s credit card had been used in San Antonio days after her murder. And they found reports from neighbors who told police that they saw a man in a green van park near the Mortons' home several times before the crime.

At issue in the court of inquiry is whether Anderson committed criminal misconduct when he turned over only a few pages of evidence to Judge William Lott, who had asked the prosecutor to submit exculpatory evidence. Lott, who died in 2009, wanted to review the evidence to see whether it could help bolster Morton’s claims of innocence. That file was sealed until after Morton was released from prison.

Whether or not it was Boutwell’s errant investigation that prompted Anderson to discount the evidence, Morton’s lawyers say the prosecutor had a legal responsibility to disclose that information.

“That does not excuse failing to obey a court order,” said Barry Scheck, co-founder of the Innocence Project.

Anderson’s lawyer, Eric Nichols, declined to comment for this story. In legal documents, Anderson’s lawyers argue that instead of the judge ordering all of the investigator's reports to be submitted, Anderson offered and the judge agreed to review just one investigative report regarding statements that Morton made on the day of the murder. They also said that the statute of limitations has expired on any alleged violations.

The court of inquiry could last up to two weeks, and it is unclear whether state district Judge Louis Sturns, who has been appointed to oversee the case, will issue findings at the conclusion of the hearings or later. If Sturns finds that Anderson committed a criminal violation, he could issue a warrant for his arrest. 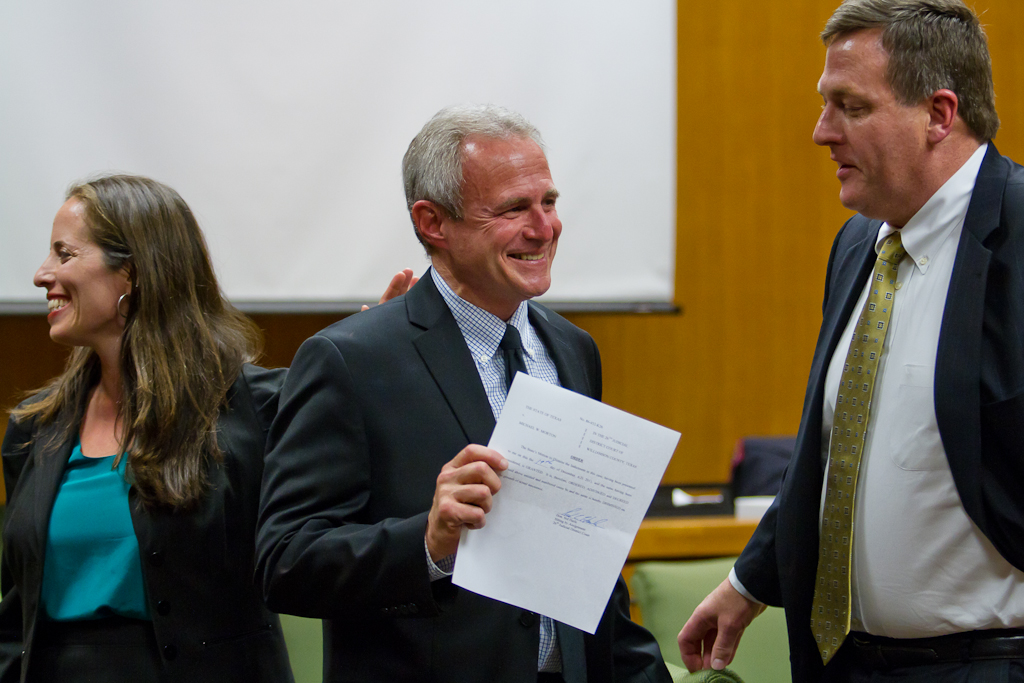 Enlarge Photo by: Callie Richmond
Michael Morton stands in a Williamson County courtroom with his attorneys, John Raley of the Houston law firm Raley & Bowick, and Nina Morrison of the New York-based Innocence Project. Morton was officially exonerated Dec. 19, 2011, after spending nearly 25 years in prison for his wife's murder.

The court of inquiry is not the only threat to Anderson’s career, though. The State Bar of Texas filed a civil lawsuit against him last year, alleging that Anderson withheld evidence and made a false statement to the court when he told Judge Lott he had no evidence that could be favorable to Morton’s claims of innocence. If he is found to have violated professional rules of conduct, Anderson could be disbarred.

As the court of inquiry action unfolds just 30 miles north of the state Capitol, lawmakers are also looking on. Morton is lobbying them to pass laws that ensure prosecutors are held accountable for mistakes that cost innocent people years of liberty.

“Not only is this a prosecutor being practically put on trial, but it’s a sitting judge,” said Jennifer Laurin, a professor at the UT-Austin School of Law. “This is a person of enormous stature in the criminal justice system who is being called to account.”