With the elections of 2012 finally behind us and the members of the newly-elected 83rd Legislature beginning to circle Austin, the breach between the attitudes of political professionals in the Texas Weekly/Texas Tribune Inside Intelligence poll and the general public surveyed in the University of Texas/Texas Tribune Poll remains a wide one.

Those who work in and around government, and the voters, who for the most part vote for their state legislators then withdraw to occasionally check in from a distance on the distasteful business of legislating, still appear far apart in their views on matters of policy and government. The gap between the insiders and the Republican voters who are dominating the electoral landscape in Texas is particularly wide when it comes to confidence in the efficacy of government. And as was evident when we compared the two groups after the May 2012 UT/Texas Tribune poll, Republican voters prioritize a very different set of problems than do the political insiders.

Both the Texas public and the insiders flounder a bit as they navigate the cross currents of American patriotism, the nationalist political culture of their state patria chica, and their apparently constitutional wariness of government. A seemingly reflexive embrace of how Texas government does things coexists with a raft of suspicion and negative judgments about state government, and downright hostility toward the federal government.

In the results from the two October surveys, both groups more or less embrace the “way government runs in Texas” when presented with one of the recurring items from the UT/Texas Tribune Poll, with the insiders slightly more sold than the general public on the Texas way — a pattern we’ve seen before when comparing these numbers. 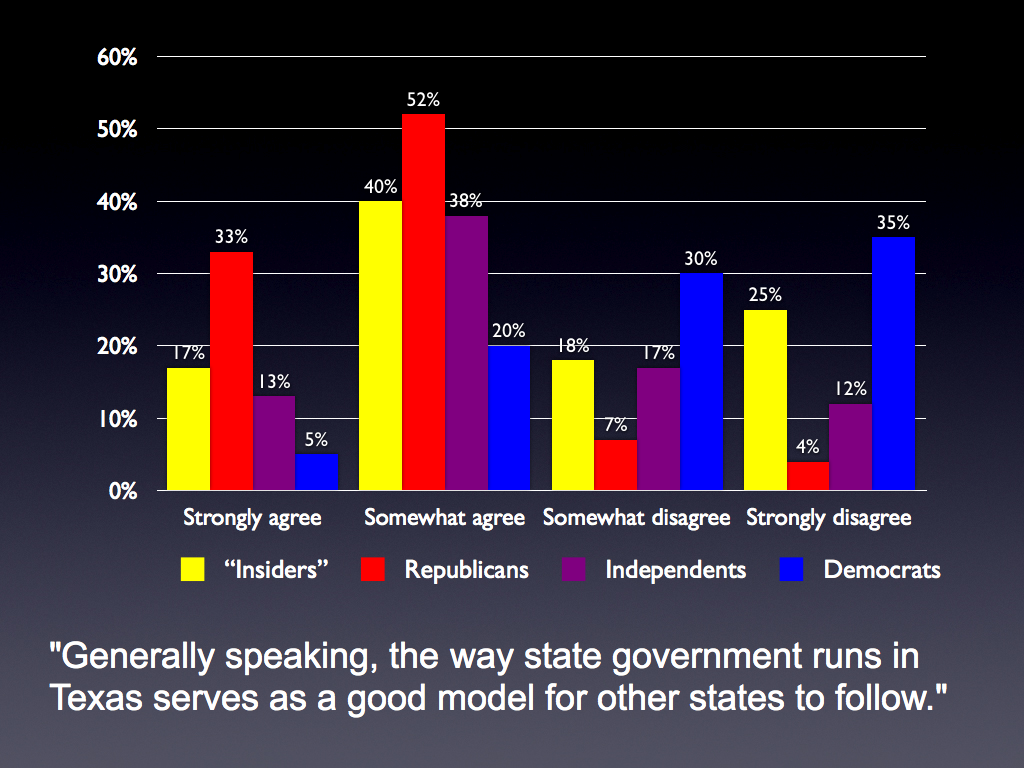 But as with so many other results in the UT/Trib poll, the overall results conceal telling partisan differences. As the figure below illustrates, 57 percent of the insiders and 54 percent of the public agree to some degree that state government in Texas is a good model for others (“Come and get it, Yankees! And you too, California hippies!”). When the public results are broken down by party identification, however, Republicans express much more support for the Texas way than Democrats, independents, or the insiders. Only 11 percent of Republicans in the sample disagree with the notion that Texas provides a good model, with a whopping 85 percent agreeing that other states ought to notice how we do things here. Democrats are much less sold on the model that all other groups: only 25 percent embrace the Texas model, compared to a little more than half of true independents. 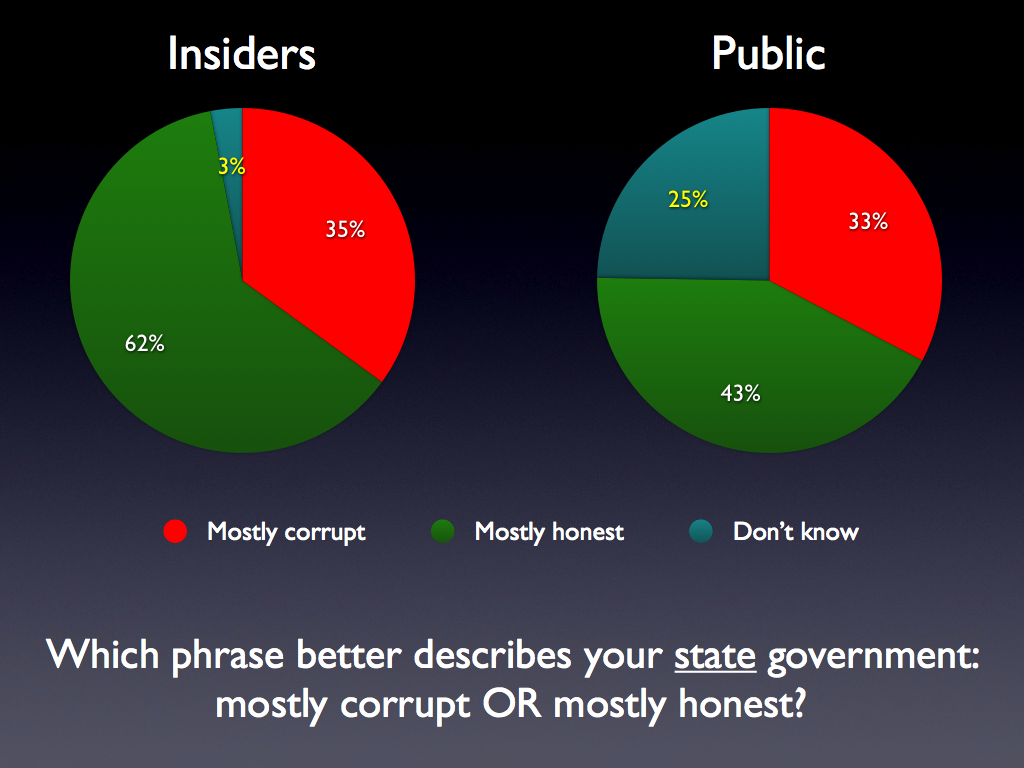 The stampede toward the Texas way of doing things begins to run in contradictory directions when we compare responses on views of state and national government. The insiders were more positive than the public in their assessments of government, and both groups were generally more positive about state government than the federal government. For example, when asked which phrase better describes state government — mostly corrupt or “mostly honest” — 62 percent of the insiders opted for “mostly honest.” Among the public, the “mostly honest” score dropped to 43 percent, with a quarter saying they didn’t know. About a third of each group directly chose “mostly corrupt.” 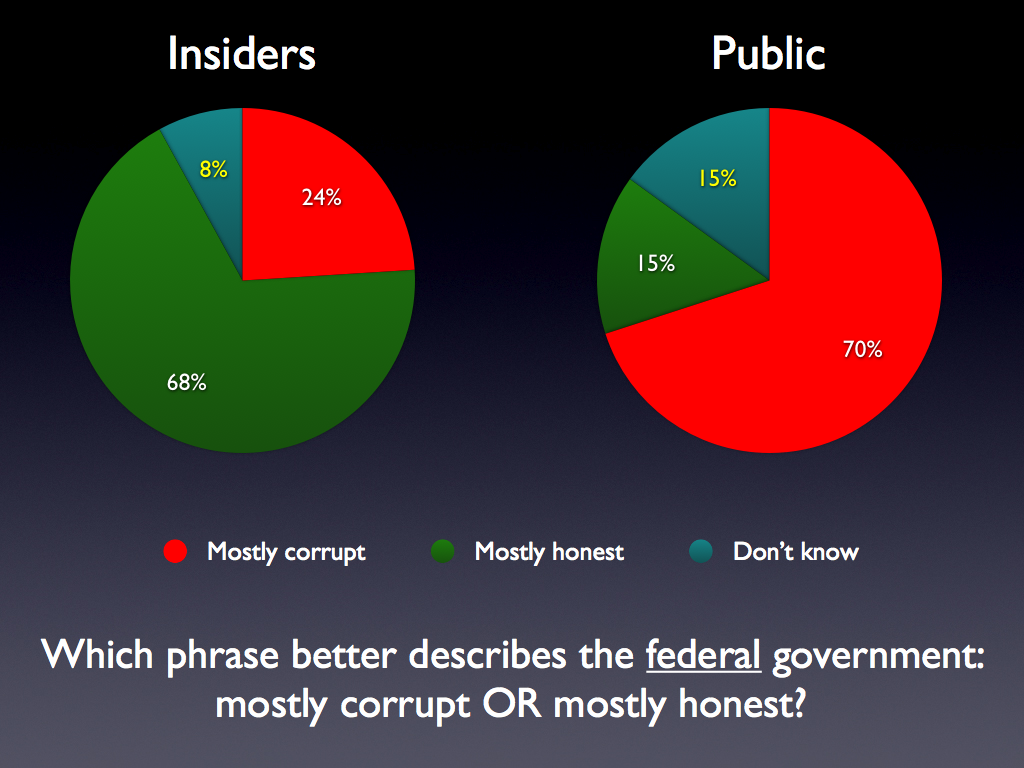 To the extent that those under the Tea Party banner have argued for a less compromising approach on the road to smaller government, and have been vocal in their denunciation of the process as it has been working in recent years, it’s no surprise that the results show that the insiders continue to have negative views about the impact of the Tea Party on politics. The insiders and the public — especially Texas Republicans — continue to have strikingly different takes on the Tea Party. 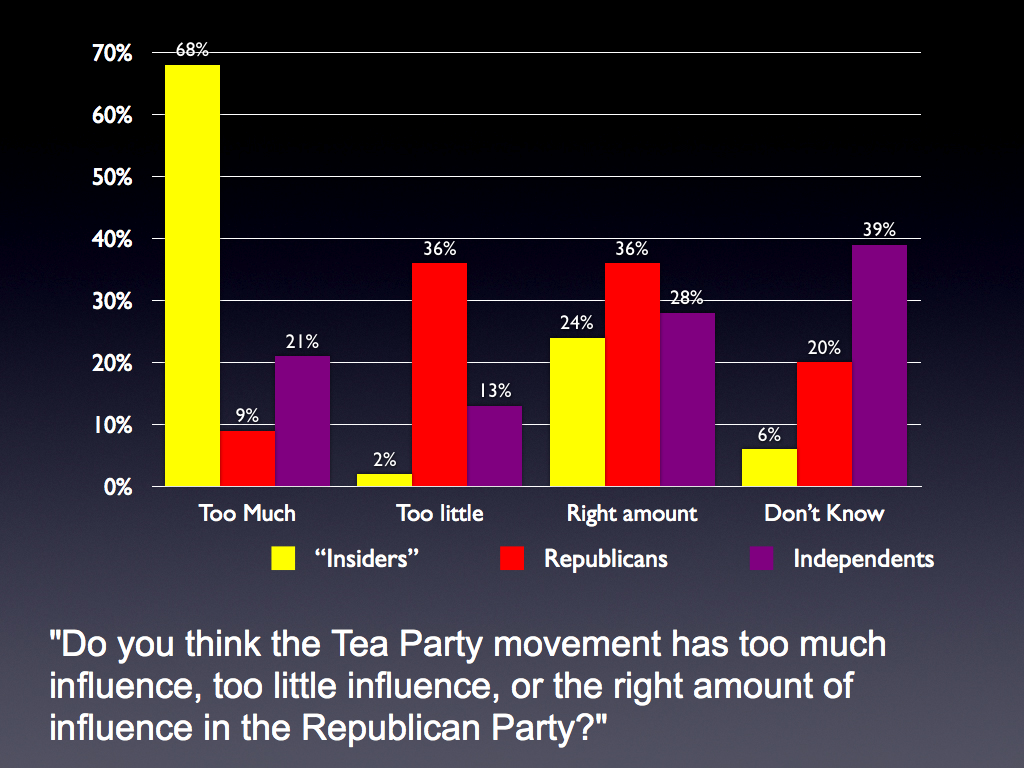 Insiders are much more negative about the impact of the Tea Party on the Republican Party, with a large majority (68 percent) saying it has too much influence. That differs markedly from Republican identifiers in the public survey, only 9 percent of whom say the Tea Party is too influential; 72 percent choose one of the broadly positive judgments.

Problems and the Eye of the Beholder

As in the May 2012 surveys, perceptions of the most important problems facing the state reflect very different priorities. Immigration and border security continue to occupy the top position among the public’s concerns, a consistent feature of the results on this item over the life of the UT/Trib poll that is driven largely by significant Republican interest in those two issues; combined, they routinely account for 40 percent or more of Republican responses.

The results from the insiders also closely resemble those found in the May survey and confirm the impression — widespread in Austin, anyway — that those in and around the political process in the state remain preoccupied with the follow up to the significant reductions in education spending in the current budget. The contrast between insider and public attention to education is especially striking: 43 percent of the insiders cited education as the most important problem facing the state, while only 10 percent of the public — and 7 percent of Republicans — did so. If there is a groundswell of pressure coming on the education issue, as many education advocates and Democrats predicted in the wake of last session’s cuts, it is so far more evident in the grass tops than in the grassroots.

This predicament regarding education is indicative of the defining problem facing lawmakers when they convene in January. In an atmosphere of deep skepticism about government, they must sort out the priorities of those within the process and those who elected them. That is not new. But they undertake their traditional tasks in an atmosphere in which the professional insiders walking the terrazzo floors of the Capitol have distinctly different views from a mobilized faction of the electorate currently viewing politics through a prism of populist hostility toward government.

For the many new members — those elected in 2010 and 2012, well more than a third of the legislature — the acuteness of this situation, in which the signals from inside the institutional process and the signals from the population outside frequently offer contradictory guidance — is the new normal.