A federal judge ruled Tuesday in favor of Northside Independent School District, granting school officials the ability to transfer a 15-year-old student because she refused to wear a student identification badge with radio frequency identification technology as part of a pilot program.

Andrea Hernandez and her father, who were represented by the Virginia-based Rutherford Institute, objected to the technology on religious grounds, saying they represented the "mark of the beast" mentioned in the Bible. The district, in turn, offered that she could wear an ID badge without the technology, but Hernandez argued that doing so would amount to a public show of support for the program, which is being tested at John Jay High School, a magnet school. The district then sent Hernandez a letter reassigning her to her neighborhood school. Hernandez filed a temporary restraining order.

"Today's court ruling affirms NISD's position that we did make reasonable accommodation to the student by offering to remove the RFID chip from the student's smart ID badge," district spokesman Pascual Gonzalez said in an emailed statement.  "The family now has the choice to accept the accommodation and stay at the magnet program or return to her home campus at the start of the second semester, Jan 22, 2013."

District officials had previously said that the program was designed both to ensure student safety and to make sure the district receives all of the state funding to which it was entitled. At a court hearing last month, Hernandez's father said  supporting the program “would compromise our salvation for NISD to make some money.”

U.S. District Judge Orlando L. Garcia wrote that Hernandez's decision to not wear the modified I.D. card was “not grounded in her religious beliefs” and is a “secular choice rather than a religious concern.” Her attorneys, at the Rutherford Institute, have promised to appeal the decision "immediately."

“The Supreme Court has made clear that government officials may not scrutinize or question the validity of an individual’s religious beliefs,” John W. Whitehead, president of the institute, said in a statement. “The district court is placing itself as an arbiter of what is and is not religious."

Original Story: Since first hearing about the use of radio frequency technology to track public school students in 2004, state Rep. Lois Kolkhorst, R-Brenham, has filed a bill during every subsequent legislative session to prohibit the technology's usage. Now, with civil liberties proponents supporting one San Antonio student's right to refuse the technology, her proposal might get wider attention.

Chris Steinbach, Kolkhorst’s chief of staff, said he thinks a court case — in which the San Antonio student is arguing that her school's ID card pilot program violates her civil rights — might spark the necessary attention to move the bill forward. A hearing on that case was scheduled for Wednesday morning in a state district court, but it was removed to federal court.

"The stars are aligning with people on the left and right with people who are concerned about parental rights and privacy," Steinbach said.

The technology involves radio chips embedded in the ID cards of students, which allow school administrators to track students’ whereabouts while on campus. It has gained increasing attention in the wake of a pilot program in two San Antonio schools that administrators say is meant to ensure the safety of students.

One student has refused to wear the ID card, saying it violates her religious beliefs, and is now being represented in court by a civil liberties group, which says that she has a constitutional right to refuse any participation in the tracking program.

The radio frequency identification tags, originally developed to track physical goods and even cattle, are being tested at John Jay High School and Anson Jones Middle School in the Northside Independent School District. They are not the first schools in Texas to use the technology. In 2004, Spring ISD, in the Houston area, began using the technology to track elementary school students getting on and off of buses. It has since expanded its program, eliciting concerns from the American Civil Liberties Union.

The goal, said Pascual Gonzalez, a Northside ISD spokesman, is to ensure student safety and help the district receive all of the state dollars to which it is entitled. In Texas, schools receive state money based on how many students they can count in attendance. The radio ID tags allow districts to count students who are not sitting in their homeroom classes, because they track students' whereabouts throughout the campus. The district expects a $2 million return on an initial investment of $261,000 to obtain the technology.

Next summer, after the first year of the pilot program, Gonzalez said, the district will decide whether to expand the program to other schools.

But it won’t have that chance if Kolkhorst gets the Legislature to strike down the practice in its 2013 session. She has pre-filed two bills on the identification technology. HB 102 would bar school districts from using the radio tags. HB 101, on the other hand, would allow districts to only use the cards if their school boards approve them — and only if students who refuse the ID cards are given an “alternative method of identification” and not penalized for their refusal.

“There's the easy way and the hard way,” Steinbach said. "She's just going to gauge the temperature of the Legislature."

This month, Andrea Hernandez, a John Jay High School student, refused to wear the tags. Her father, Steve Hernandez, told a reporter from the website Infowars.com and another from the Christian Broadcasting Network that the policy reminded him of the “Mark of the Beast” mentioned in the Bible, in Revelations 13:16-18.

He contacted the Rutherford Institute, a Virginia-based civil liberties organization. John Whitehead, the organization’s president, came to the same conclusions as the ACLU, which expressed concern that outsiders could get the technology and track students off campus. Last weekend, San Antonio news outlets reported that a teenager had unsuccessfully attempted to hack into the school district’s website.

On Nov. 13, Whitehead sent a letter to Northside ISD’s superintendent saying that Hernandez was constitutionally protected in her objection to even wearing the tags without the chip embedded in it, because to do so would be “an expression of support for the program” and that violates her First Amendment rights.

Whitehead argues that the specifics of Hernandez's religious objections — in this case based on the Bible's book of Revelations — are enough to justify her refusal to wear the ID card. “A belief doesn't have to be true. It's whether it's sincere or not,” he said in a phone interview. Whitehead also does not buy the safety argument offered by the district, because even without the technology, “schools have all these stringent rules anyway” about student security and who is allowed on campus, he said.

“We respect their religious objection,” said Gonzalez, the Northside ISD spokesman. “It's not about big brother and the invasion of privacy." He said that district officials met with the Hernandez family and allowed Andrea to wear the card around her neck without the embedded radio technology chip. He said that this should have been enough of a compromise and that now she is “not in compliance.”

"Lets keep this in context,” he said. “We have 4,200 students involved in this pilot, and we have one parent against it.” 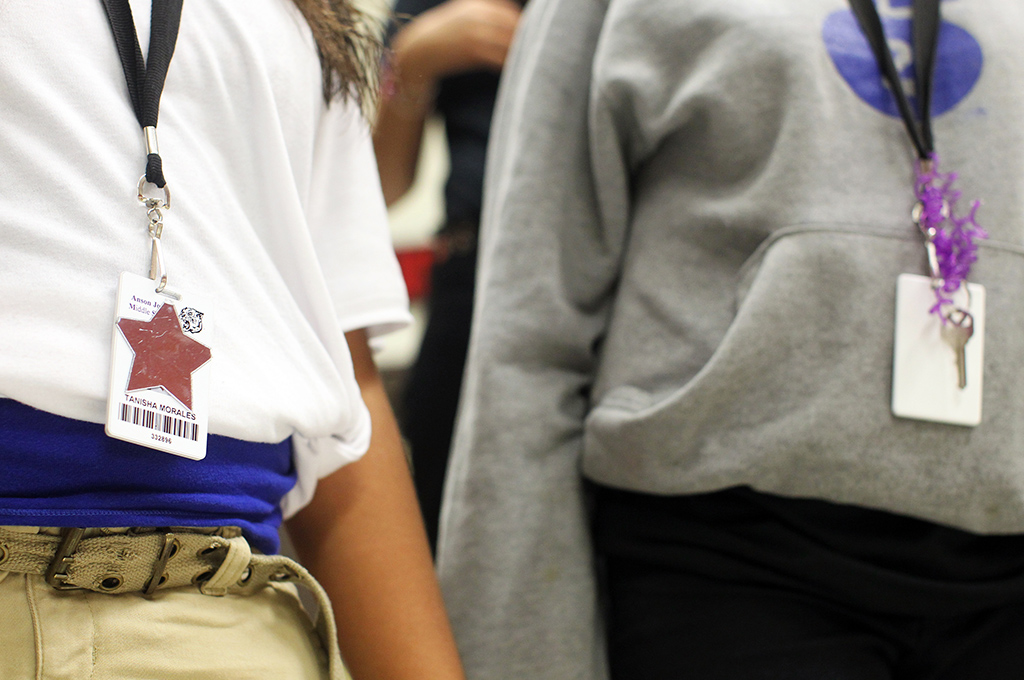 Last week, the district sent Andrea Hernandez a letter reassigning her to her neighborhood school. (John Jay, where she currently attends, is a magnet school.) Hernandez filed a temporary restraining order to allow her to remain at John Jay, which a federal court granted. A San Antonio district court judge had been scheduled on Wednesday to hear arguments from the Rutherford Institute, on behalf of Hernandez, and attorneys for the school district over whether she can stay at John Jay and not wear the ID card. On Tuesday, the case was removed to a federal court, following a petition by the school district, and a hearing has not been set.

Hernandez's attorneys say that the school is violating rights guaranteed by Texas' Religious Freedom Act, as well as the First and 14th Amendments to the U.S. Constitution.

Steinbach and Kolkhorst said the court case and related news reports could provide momentum for their bill. But Gonzalez, the Northside ISD spokesman, said the opponents of the program are “fed by agenda-driven websites and agenda-driven organizations."

"They don't walk in our shoes,” Gonzalez said. “We are charged with the safety of our students every day. If this technology allows us to keep students safe at school and recoup revenue for the school, it's something we want to follow up on."

Steinbach said the technology has dangerous consequences for students who are forced to comply. “Do you have to have this level of tracking to verify the attendance of the kids?” he asked. “Do you have to destroy free will to verify attendance? That will be the great debate in a hearing.”

He thinks the bill will present a unique opportunity for Christian opponents of the technology and civil liberties groups to work together. "Where else are you going to find a bill that the ACLU and Christian fundamentalists shake hands [on]?" he asked.