MARLIN — Elizabeth Ramirez still remembers the week in 1994 when she cared for her two young nieces, taking them shopping and bringing them to the Arby’s restaurant in San Antonio where she worked. When it was time to leave, they clung to her. “The girls were so happy with Liz,” said Gloria Herrera, Ramirez’s mother.

But those fond memories were soon replaced by a nightmare, when the 7- and 9-year-old girls accused Ramirez and three of her friends of pinning them down and sexually assaulting them. In two trials, the four women were convicted and sentenced to prison, based largely on the testimony of a San Antonio doctor who examined the girls and said she saw signs of abuse.

Ramirez, who was considered the ringleader and tried separately from her friends, is now 15 years into a nearly 40-year sentence. She was stunned by the allegations, and was just as surprised in 2010 when one of her nieces recanted. “I am sorry that it is has taken this long for me to know what really happened,” the girl wrote in a letter.

Advocates for Ramirez and the other three women, who were sentenced to 15 years each, are pushing for their exonerations, and they are trying to obtain access to photographs from the girls’ medical examinations to determine whether medical testimony was based on reliable forensic science. Jeff Blackburn of the Innocence Project of Texas, who is working on the case, says that if the women are freed it will “be a can opener for a lot of others.”

“It is representative of a large number of cases where the so-called scientific work has been sloppy, result-serving, and systematically poor,” Blackburn said. Wrongful convictions for sexual assault may be “the next frontier for junk science cases in Texas.”

The Bexar County district attorney’s office, which originally prosecuted the women, has offered to reinvestigate the case but said it needed more information before making any determination on the women’s innocence or guilt. “We’re going to work with the defense to get at the truth,” said Enrico Valdez, the head of the office’s appellate division.

When Ramirez and Kristie Mayhugh, Anna Vasquez and Cassandra Rivera, were accused in 1994 of sexual assault, all four refused to plead guilty to a lesser sentence. Relatives of the women have said they believe the children may have been coached, and that officials wanted to believe the young girls. “When you have a crime concerning children, it’s hard,” Rivera said last week. “People don’t know what to think.” 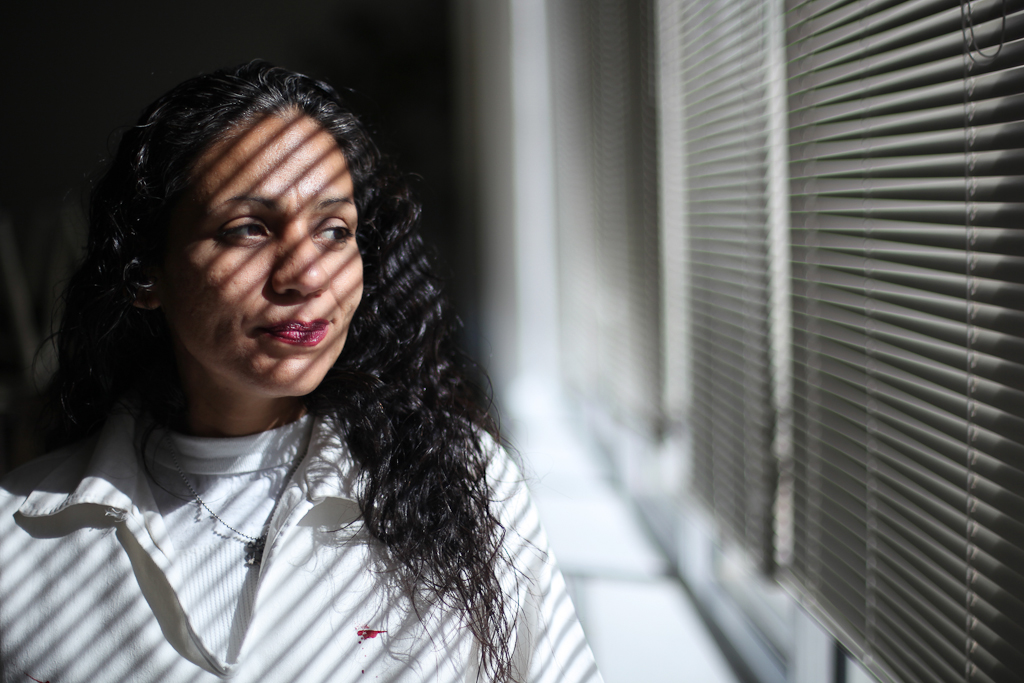 Enlarge photo by: Tamir Kalifa
Cassandra Rivera is serving the 12th year of a 15-year sentence for sexual assault of a child at the Hobby Unit in Marlin. Rivera's defense lawyers are working to prove her innocence.

Since then, a number of advocates have fought for the women’s exonerations. Darrell Otto, a college instructor from Canada, became aware of the case in 2006. He submitted an application to the National Center for Reason and Justice, which advocates for those believed to be wrongfully accused of crimes against children.

Debbie Nathan, who worked with the center, said the story jumped out of numerous cases she was asked to scrutinize. She had written a book about the Satanic abuse cases of the 1980s and early 1990s — when adults throughout the U.S., often employees of day-care centers, were accused by children and their parents of rape and murder in secret rituals of devil worship. Often, the accusations would came long after the alleged events took place and, as in the San Antonio case, the convictions rested solely on the testimony of children, which could not be corroborated. Nathan said those cases have much in common with those of the San Antonio women because they reflected a desire by professionals to believe child accusers.

In particular, Nathan takes issue with the medical testimony of Nancy Kellogg, a professor of pediatrics at the University of Texas Health Science Center at San Antonio. Kellogg examined the two girls and told juries at the two trials that she saw physical signs of “healed trauma,” meaning that scars on the girls’ genitalia indicated sexual assault.

On cross-examination, however, Kellogg testified that there was no way to tell the age of the scars, and that they could have been accidental.

On her faculty page, Kellogg says she has testified in more than 800 cases in which children were allegedly abused. In at least one of her other cases — Frank Navarijo’s 1999 conviction for the sexual assault of his 5-year-old daughter — the victim has recanted the accusation. A San Antonio judge who is revisiting that case has not yet ruled on it.

Kellogg declined a request to comment for this story.

Will Sansom, a spokesman for the UT Health Science Center, wrote in an email, “Patient information is confidential and the legal system is the appropriate venue for examining facets of any case.”

Nathan shepherded the case to the Innocence Project of Texas, where the lawyers Mike Ware and Blackburn have tried to get access to pictures from Kellogg’s examination so they can show them to other pediatric specialists.

“We’ve already requested the photos, and we’re going to make them available,” said Valdez of the Bexar County district attorney’s office. “We are moving as quickly as we can to meet with witnesses and get on top of this.”

One of Ramirez’s nieces has recanted her accusation twice, first in 2010, and then in August in front of Ware, Blackburn, and a filmmaker, Deborah S. Esquenazi, who is making a documentary about the case.

But a potential exoneration could take years. The lawyers will file a petition with a state court, which will then send a recommendation to the Texas Court of Criminal Appeals.

“We’ve got all these supporters and they want everything to happen now,” Blackburn said, “and then we have the legal system which pretty much operates at glacial speed.” 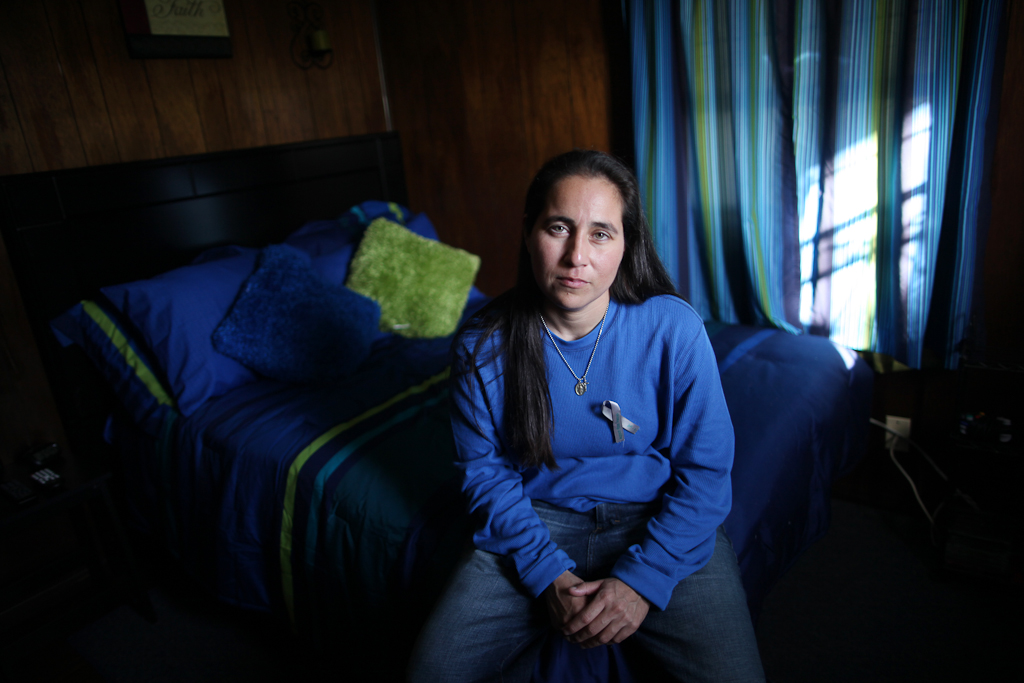 Enlarge photo by: Tamir Kalifa
Anna Vasquez was granted parole on Nov. 2 after 12 years in prison but faces severe restrictions due to her conviction for child sexual assault. She and three other women are attempting to get exonerated after one of the alleged victims recanted in August.

Nevertheless, Blackburn says an exoneration could open the door to others. According to the National Registry of Exonerations, of the 20 overturned convictions in child sexual abuse cases in Texas, two involved “misleading forensic evidence” and two involved women defendants.

Vasquez was granted parole on Nov. 2. She can only leave her house with permission and cannot interact with anyone younger than 18, or operate a cellphone or computer. “That’s really hard to accept,” she said. “I’m still in prison, in a sense.”

Rivera has become a grandmother since she was incarcerated.

Ramirez, who is still in prison, spends her days working in a print shop and reading magazines and her Bible. She said she wrote letters for years before anyone took an interest in her case. Her son was 2 at the time of her conviction, and she has not seen him in nearly 12 years.

“Liz feels very guilty for her friends and has always carried that guilt with her,” said her sister, Monica Herrera.

But Ramirez said she would not give up.

“It’s just not fair,” she said, “but what do you do besides try to fight?”