Throughout the night, Tribune reporters will update you on the results of contested general election battles statewide, from the first early voting totals through the last ballots counted, from local legislative races to the presidency. We'll also be updating our election scoreboard as results roll in. 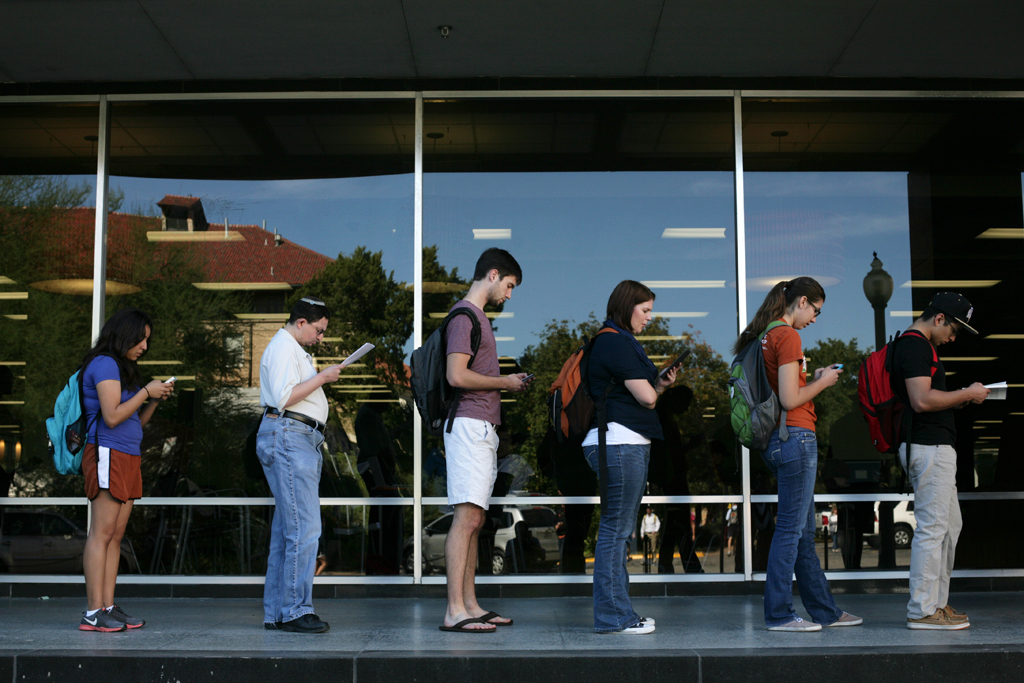 Voters wait in line to cast their ballots at the Flawn Academic Center on the University of Texas at Austin campus on Tuesday, Nov. 6, 2012 in Austin, Texas. Photo by Tamir Kalifa.

A Blanco County resident heads to the Old Blanco County Courthouse to cast their vote in the last hour of voting in Tuesday's election. Photo by Bob Daemmrich. 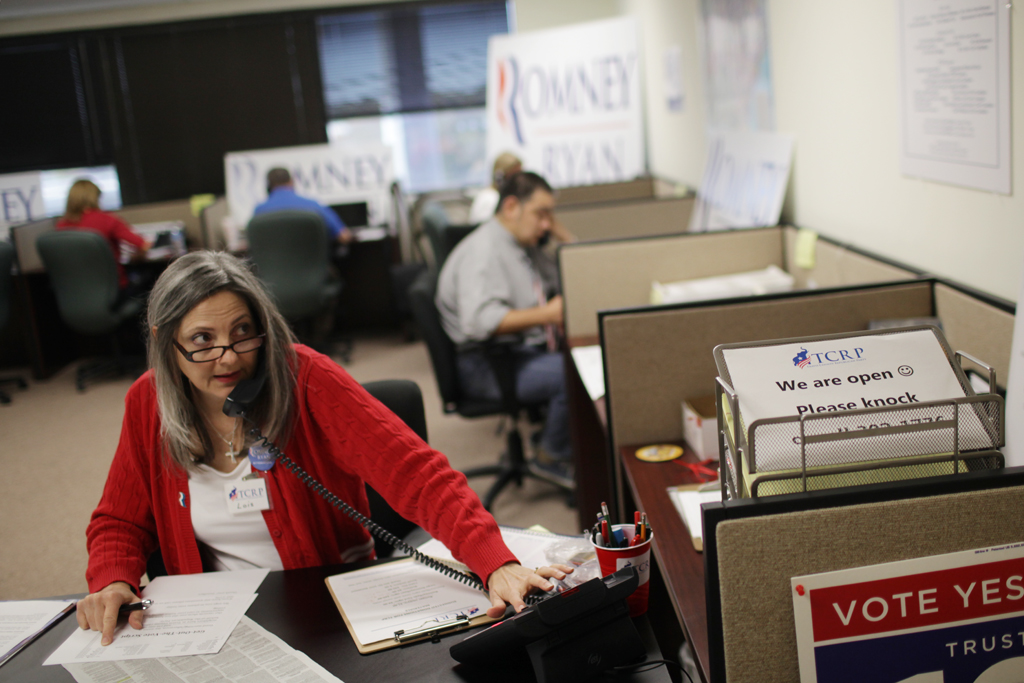 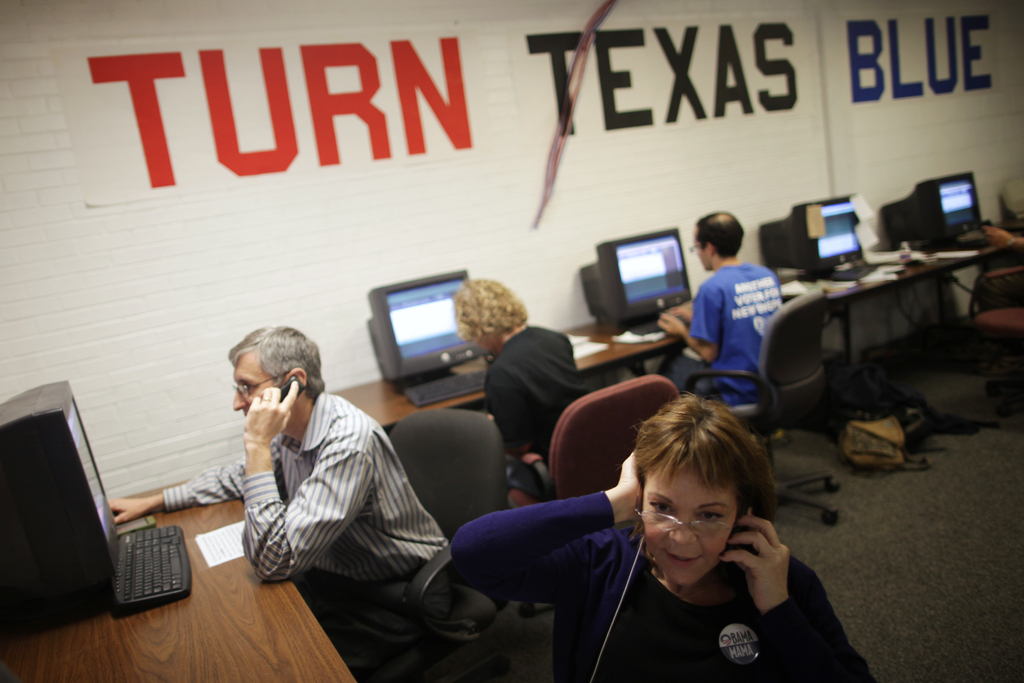 Results from the Texas Secretary of State are starting to come in, check out our election scoreboard for updates.

In first early voting count out of Tarrant County, Wendy Davis and Mark Shelton are neck and neck in SD-10, separated by about 100 votes out of 180,000 ballots counted.

For Texas House District 12 in Central Texas, Democrat Robert Stem is up over Republican Kyle Kacal in early voting.

In early voting, Republican Christi Craddick is way up over Democrat Dale Henry in one race for the Railroad Commission; Republican Barry Smitherman, the incumbent commission chairman, is even further ahead of his Libertarian and Green party opponents in the second and final Railroad Commission race. No surprises here.

The race for CD-23 will be close, as predicted. Early voting results from Bexar County show incumbent Republican Francisco "Quico" Canseco has a slight lead over Democratic challenger Pete Gallego. The race attracted $10 million, including $6.5 million from outside political groups this cycle.

In the most competitive SBOE race, Republican incumbent Charlie Garza has about 60 percent of the early vote totals in the El Paso based district. But the district leans Democratic — so Democrat Martha Dominguez still has a chance.

In SD-22, Republican Brian Birdwell leads with nearly 90 percent of the early votes over Libertarian Tom Kilbride. Democrat Lyndon Laird withdrew from the race in August.

In SD-20, incumbent Juan “Chuy” Hinojosa is ahead of challenger, GOP House member Raul Torres 68,800 to 46,400 after early-voting returns from Hidalgo and Nueces counties.

We've called SD-22 for Brian Birdwell, who has 87 percent of reported votes, over Libertarian Tom Kilbride.

Incumbent Democrat Carlos Uresti ahead of challenger Michael Berlanga 54,855 to 36,488 in SD-19 race. 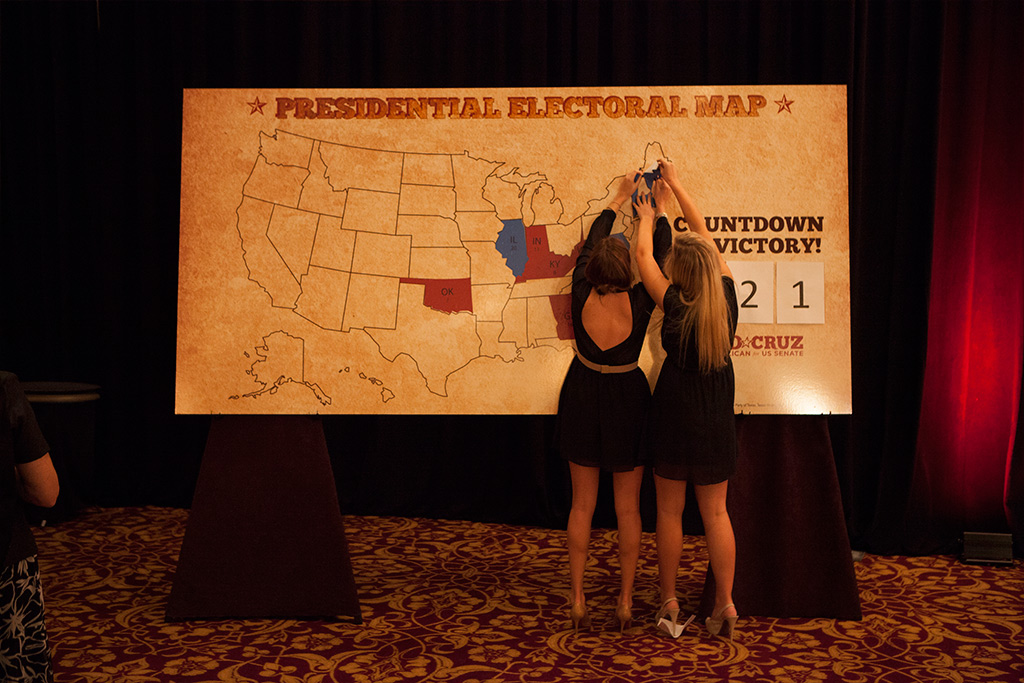 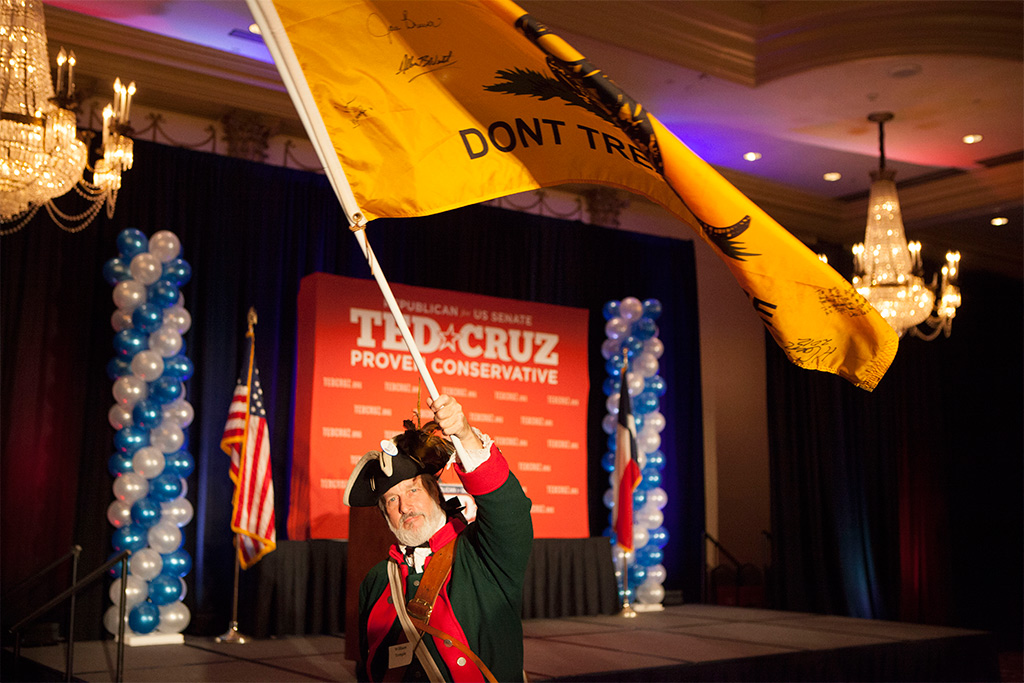 We are calling a slew of Congressional races, including for the following Republicans: Louie Gohmert wins in CD-1, Ted Poe wins in CD-2, Ralph Hall wins in CD-4, Jeb Hensarling in CD-5, John Culberson wins in CD-7, Lamar Smith wins in CD-21, Pete Olson in CD-22, Michael Burgess wins in CD-26. Those were all incumbents, but we are also calling the open CD-36 for Steve Stockman, who is also a Republican.

We've called CD-20 for Democrat Joaquin Castro, a former member of the Texas House who is on his way to Washington, DC.

With El Paso County votes coming in, Democrat Martha Dominguez is surging back against incumbent Republican Charlie Garza in SBOE-1. He's at 51 to her 48 percent.

With early voting results from El Paso County reported, Canseco still has a tight lead on Gallego for CD-23. But Gallego took 77 percent of the early vote in El Paso, a strong sign this race is still too close to call.

We have called SD-25 for Republican Donna Campbell, an emergency room physician. In a press release, she said, "This election shows that the voters of the district want a senator who isn't a politician, but an everyday citizen who shares their values. I will work hard to make sure that families and small businesses have a strong conservative voice in Austin."

In SD-21, we're calling it for Sen. Judith Zaffirini over Republican Grant Rostig.

Polls in Galveston close in 10 minutes, so we'll have some more early voting totals shortly.

We have called the race for the open CD-25 seat for Republican Roger Williams.

Gallego edges ahead of Canseco by 775 votes as more precincts report for CD-23.

A little more than 30 percent of the votes are in for CD-23 and Gallego is still ahead of Canseco. Currently, Gallego has a 3,080 vote lead.

With 22 percent of precincts counted in SD-10, Wendy Davis is just 400 votes ahead of Mark Shelton.

Early voting totals are finally coming out for Galveston County. In CD-14, Republican Randy Weber leads Democrat Nick Lampson 59.9 percent to 38.5 percent. In SD-23 the party switches, with Republican Wayne Faircloth trailing Democrat Craig Eiland 36.7 percent to 63.4 percent. No non-early voting totals have been reported yet, but remember that Galveston County's polls stayed open an extra two hours tonight due to computer issues early in the day. All votes cast after 7 p.m. are consider provisional (and will not be counted tonight), so it waits to be seen how that may alter these races.

And Canseco takes the lead back from Gallego in CD-23 with more precincts from Bexar County, his home turf, reporting.

With 65 percent of precincts counted, Wendy Davis now has a 5,000 vote lead over Mark Shelton in SD-10. That's a big jump over the last reported totals.

With 93 percent of precincts counted, Wendy Davis is maintaining that 5,000-vote lead in SD-10.

We have called the race for the open seat in CD-34 for Democrat Filemon Vela.

With 61 percent of the vote for CD-23 counted, Canseco leads Gallego by less than 2,000 votes.

As votes from Dallas County start rolling in, Republicans Villalba and Sheets maintain a slight lead in two competitive districts, HD-114 and HD-107.

With 72 percent of the vote counted, Gallego and Canseco are now separated by .2 percent.

We have called the seat being vacated by U.S. Rep. Ron Paul for fellow Republican Randy Weber, who defeats Democrat Nick Lampson.

We are pulling the plug on the last of the #SBOE races. No suprises here: Incumbent Republican Garza has lost to Democrat Dominguez in El Paso. Democrat Ruben Cortez Jr. has won the open seat left by Democrat Mary Helen Berlanga. Republican Tom Maynard has won the seat left open by Republican Marsha Farney.

Gallego has pulled of ahead of Canseco by 4,000 votes in CD-23 race with only a quarter of precincts left to count.

We're calling CD-23 for Pete Gallego over Francisco "Quico" Canseco. After an up and down race, Gallego now has 49.8 percent of the vote. 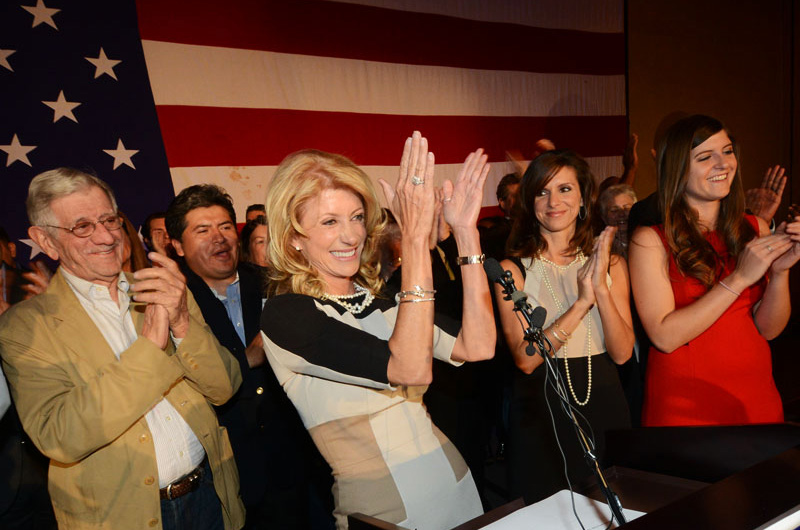 Wendy Davis, flanked by her father, Jerry Russell at left and her two daughters, at right, applauds her supporters during her victory speech at the Fort Worth Hilton on November 6, 2012. Photo by Robert Hart. 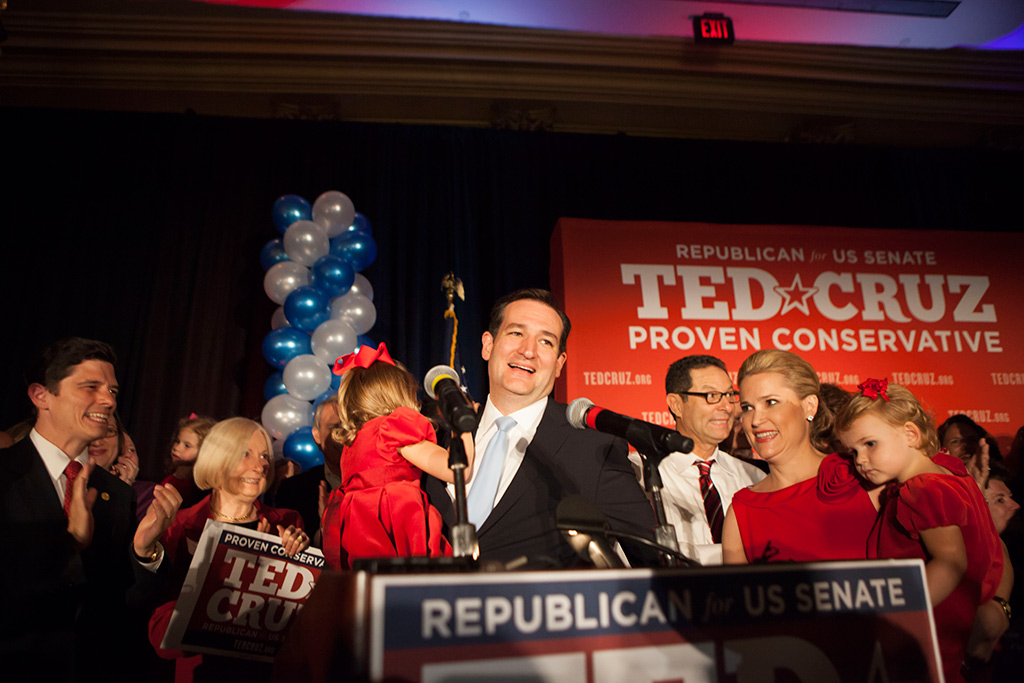