The surviving relatives of Cameron Todd Willingham gathered at the Capitol on Wednesday after sending an application to clear his name, eight years after his execution for a 1991 fire that killed his three young children.

Along with attorneys from the Innocence Project, the Texas Defender Service and several law firms, they are asking the Board of Pardons and Paroles to issue a “posthumous pardon,” clearing Willingham’s name and say that his conviction was based on flawed investigative methods. If granted, it would be the first time an official agency in Texas recognized that an innocent person had been executed.

It wasn't immediately clear when the Board of Pardons and Paroles would take up the Willingham family's application, but Board spokesman Harold Battson said typically these types of files take 3-4 months to review and will be read by entire 7-member board. Other family members and trial officials will also have an opportunity to provide input.

“This is a process that needs reform,” said Gerald Goldstein, a lawyer who helped prepare the application. “Let’s rectify our mistakes and move on.”

“My son Todd was convicted on false evidence,” said Eugenia Willingham, the stepmother of Willingham, who traveled from Ardmore, Okla. “How I’d like to be proud of the Willingham name again.”

“We felt so helpless not having the resources to help him,” she continued. “I can still remember the hurt, the anger he felt.”

Willingham was convicted in 1992 of setting a fire at his Corsicana home, based on the testimony of two fire investigators who said that various aspects of the burn damage indicated arson.

As his 2004 execution date neared, his attorneys sent Gov. Rick Perry and the Board of Pardons and Paroles a report by Gerald Hurst, a fire expert, suggesting that the conviction was based on deeply flawed forensic methods. Evidence that had been used to prove arson at the trial, he explained, was simply evidence present in any fire scene.

In the years that followed, an article in The New Yorker and several documentaries brought national attention to the case.

In 2010, District Judge Charlie Baird held a hearing to determine whether there was sufficient evidence to hold a court of inquiry regarding a possible wrongful execution. A Texas appeals court barred him from releasing an opinion, accusing him of bias in the case.

In January that year, Attorney General Greg Abbott released an opinion stating that posthumous pardons can be granted. In March, Perry officially pardoned Timothy Cole, who had died while serving time in prison for a 1986 kidnapping and rape of which he was later cleared by DNA.

Goldstein, who works with the Innocence Project, said the New York-based organization is looking at 26 cases of arson for possible wrongful convictions. The only man exonerated from Texas’ death row in an arson case, Ernest Willis, also spoke to reporters, having driven from his home in Mississippi. “I got lucky,” he said, highlighting parallels between his and Willingham’s convictions. “Let’s give his family some relief.” 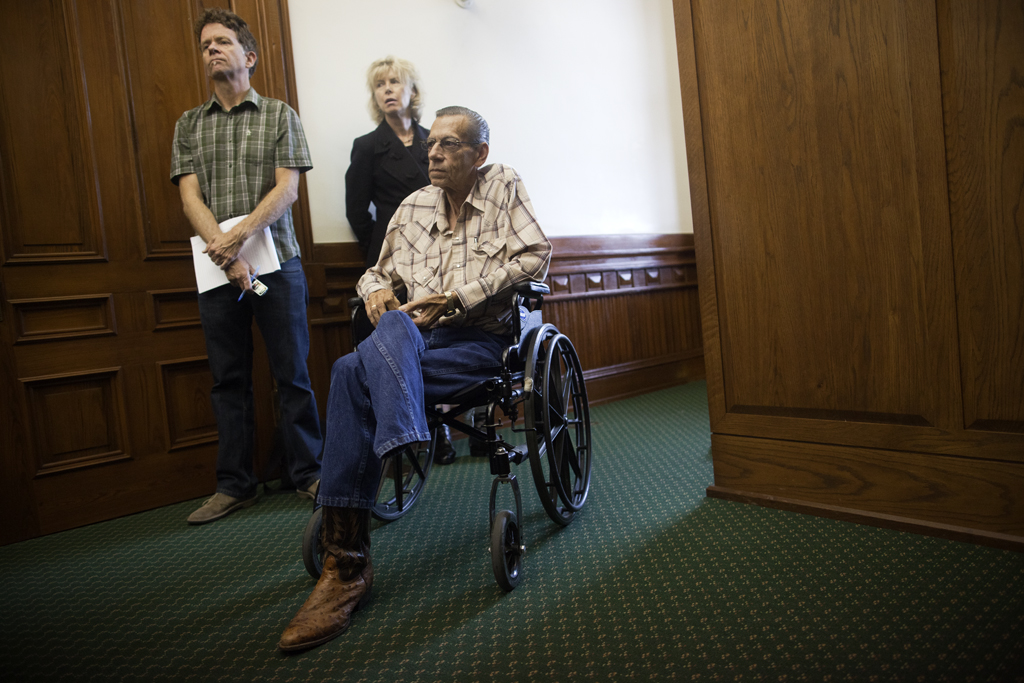 Enlarge photo by: Tamir Kalifa
Ernest Willis was convicted in 1987 of an arson case similar to Willingham's but was fully exonerated in 2004. Willis drove over 600 miles from his home in Mississippi to attend the press conference and express his belief that Willingham was innocent..

In 2005, the Legislature formed the Texas Forensic Science Commission to investigate complaints about the forensic methods used in criminal cases. Last year, the commission issued a report on Willingham’s conviction, and recommended more education and training for fire investigators. Attorney General Abbott issued an opinion prohibiting the commission from investigating “specific items of evidence that were tested or offered into evidence prior to” Sept. 1, 2005.

Throughout the process, Stacy Kuykendall, Willingham’s former wife and the mother of the three victims, has maintained that he was guilty of the murders. “My ex-husband murdered my daughters,” she told reporters in 2010, standing outside the courtroom where Baird had gathered Willingham’s advocates. “And just before he was executed, he told me he did it," she said. Willingham’s defense lawyer at his trial, David Martin, has also publicly expressed his belief that Willingham was guilty.