Three Republicans who served in the Legislature with Rep. Pete Gallego, D-Alpine, are criticizing his GOP opponent's use of a picture of Jesus in a controversial mail piece.

Gallego said U.S. Rep. Quico Canseco's adverstisment, which uses both the face of Jesus and two men kissing each other to criticize the Democrat’s stand on social issues, went “beyond the pale,” and he has called on Canseco to apologize to the voters who got it.

Canseco's campaign said the congressman stands by the ad and calls it accurate.

“Religion brings us together. Jesus should not be a prop for any campaign,” said Solomons, who is not seeking re-election. “I’ve known Pete a long time. We don’t agree on every issue, but he’s an honorable man. The constituents would better be served if Congressman Canseco stuck to the issues.”

Swinford, for his part, called Gallego “an honest, Christian man,” adding that “Canseco’s use of an image of Jesus in an attack ad against Pete is just plain wrong.”

Reyna said God is neither Republican nor Democrat.

“It saddens me that Congressman Canseco has chosen to use a sacred image on a political mail piece,” she said, according to the Gallego campaign. 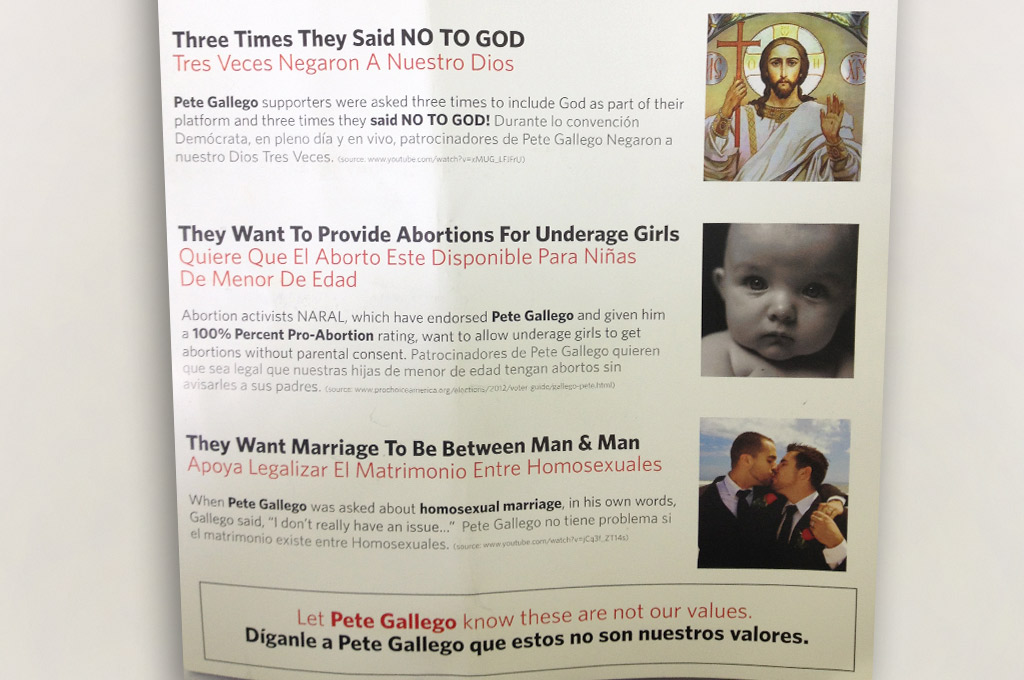 Scott Yeldell, Canseco's campaign manager, said the ad accurately portrays Gallego's record of voting in favor of abortion rights and said he has associated himself with a party that sought to remove references to God from the party platform.

"His party denied God three times at their convention. Now to try and save a failing political career he is acting like he stands up for the faith he abandoned years ago," Yeldell said.

The two sides have disputed Gallego's record on gay issues. Canseco has said Gallego is for gay marriage. Gallego says he is favors allowing gays to unite in civil unions but not get married.