At the time, with budgets being cut across the state, the large investment in a company that was already providing a free service for students sparked consternation in some circles. "Would I have had different priorities for that $10 million? Yes." University of Texas at Austin President Bill Powers said at a 2011 meeting of the UT Faculty Council.

More than a year later, the company’s name is frequently dropped among political and higher education leaders in the state — including Powers, who cited it in a recent address as one of the companies UT is working with to “bring technology to bear on a variety of education issues.”

This week, MyEdu announced it is branching out to a new issue that many students have struggled with: employment.

Students using MyEdu — including more than 49,000 UT System students, officials say — will now be able to convert the massive amounts of data they put into the program through their educational journey into an interactive, highly visual digital profile that can be submitted as a résumé.

This spring, the Associated Press reported that roughly half of recent college graduates in the county are unemployed or underemployed. MyEdu CEO Michael Crosno told the Tribune that he hopes the service his company is rolling out in Texas will give the state’s students a leg up.

“The whole idea behind it is, how do I creatively tell my story?” Crosno said. “Students today are not text-based like a traditional résumé. They are rich media-based.”

MyEdu is also addressing the employer side of the equation. Currently in Texas only, employers and recruiters who post positions through MyEdu's service can have those jobs pushed to current and future candidates whose data indicates that they would be the best match. Companies that have already signed up to use the service, which launched this week, include Ernst & Young, Macy’s and VMware.

Through the program, companies can also reach out to students early in their collegiate careers to advise them on which courses to take. Crosno said he is also hoping to get more college alumni to sign up and serve as mentors. 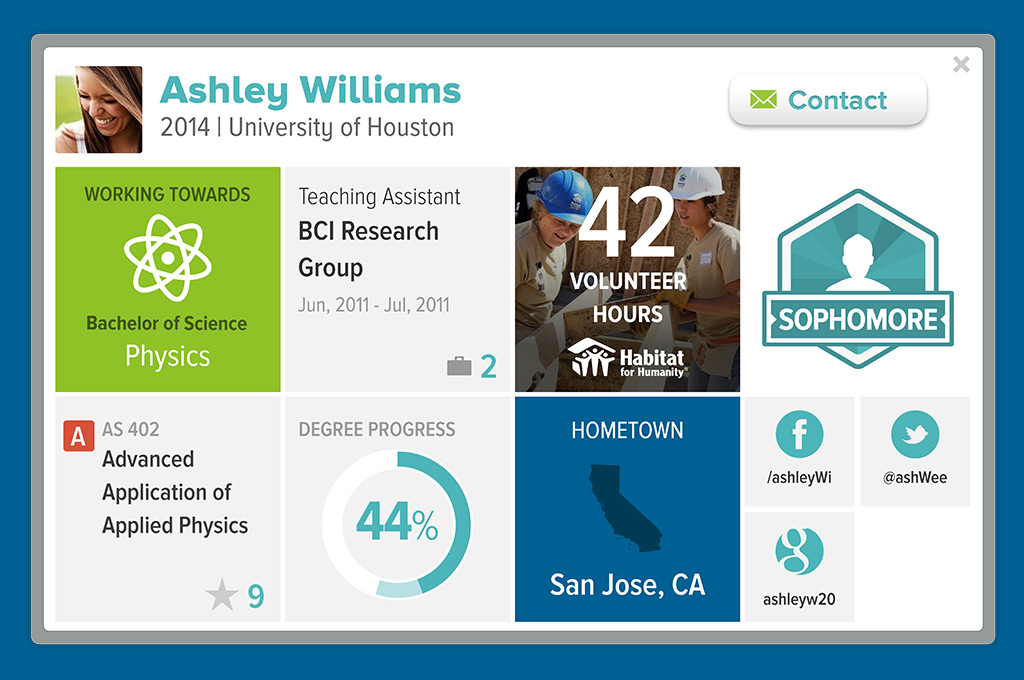 Enlarge photo by: MyEdu
A sample student profile from MyEdu.

The new profile that students can now produce through MyEdu in lieu of or in addition to a traditional job application resembles a business card and includes flippable “tiles” — one of which could be a standard format resume — with more information. It is somewhat reminiscent of a concept that other Austin-based higher education reformers have promoted: that the value of credentials will give way to personal narratives.

For example, businessman Jeff Sandefer, whose controversial proposals for changing higher education and behind-the-scenes maneuvering to have them implemented stirred up significant controversy in 2011, was recently quoted by Texas Monthly’s Paul Burka as saying, “Twenty years from now, the value of a college credential will decline. It will be replaced by a portfolio of your work that shows who you are.”

Crosno said his company, which had been largely focused on degree planning, decided to tackle the issue of employment after noticing trends in the national conversation around higher education, particularly outcomes-based funding.

“You’re starting to see a movement in federal and state spending that says, it’s about jobs,” he said. “This is about, how do we get these kids to get jobs?"

According to Frank Lyman, senior vice president of products and marketing at MyEdu, the company’s rapid growth has been aided significantly by the UT System — and not just because of the money. While they work with universities throughout the country, he said their relationship with the institutions within the UT System is special.

“They are the people we go to to help us learn what we should be doing,” he said. “We know that they’re stakeholders in this, and it’s about engaging and asking how we can help. We do a lot more of that with the UT schools than others.”