Ashton Curlee, the ambitious daughter of two teachers, received official notification of her acceptance to the new Texas Science Scholar Program at the University of Texas of the Permian Basin on the first day of college.

“It’s a really awesome program,” said Curlee, a native of Monahans. “There’s a lot of good stuff that comes along with it.”

Savings top that list. If Curlee stays on track, maintaining a 3.0 grade point average and completing 30 hours of course work each school year, she will graduate with a bachelor’s degree in chemistry in 2016. Instead of paying more than $6,300 per academic year in tuition and fees — the current cost for a regular student — Curlee will pay $2,500 per year.

That adds up to a $10,000 degree, a notion that has taken on grail-like status in some Texas higher education circles as the state struggles to address rising tuition at its public universities.

In Gov. Rick Perry’s 2011 State of the State address, he called on Texas’ universities to create degrees that cost no more than $10,000, including books. And he reiterated his desire for those institutions to lock in tuition rates for four years for incoming students. Some schools scrambled to create low-cost degrees, but the latter request was largely ignored.

Perry recently signaled his intention to once again call for a four-year tuition guarantee during the coming legislative session, teeing up a conversation about the rising price of a college education that he has been eager to engage in.

“Keeping higher education affordable is very important, and this is one step we can take,” said Catherine Frazier, Perry’s spokeswoman. “This is already an option for schools. The governor wants to take this a step further and apply it to all institutions of higher education.” 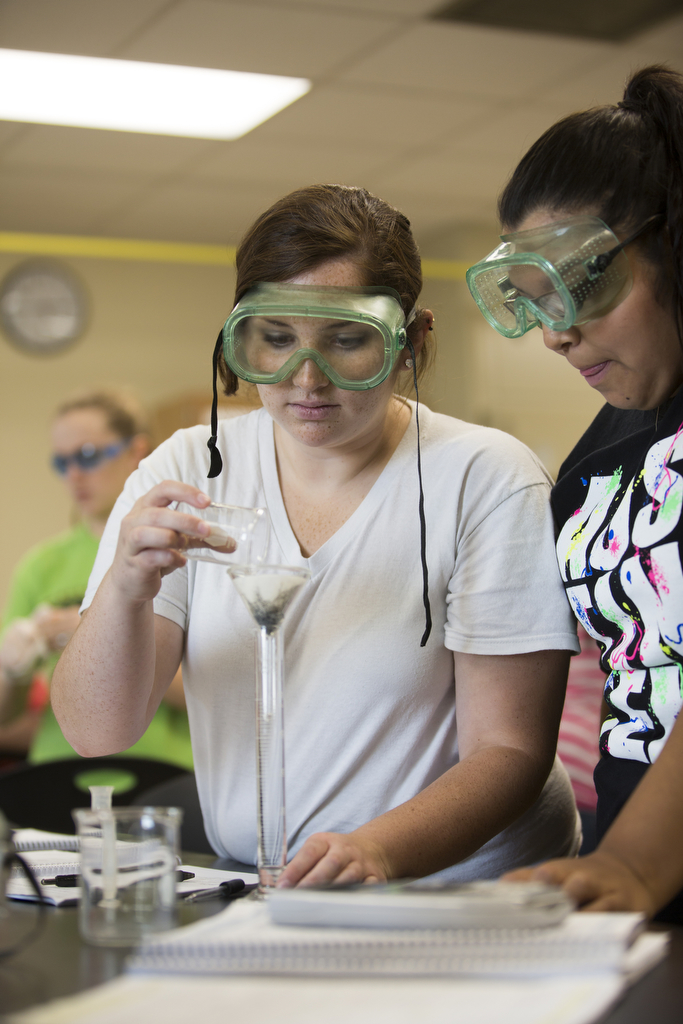 Enlarge photo by: Jerod Foster
Erin Bamford (left), a freshman chemistry major from Midland, Texas, and a Texas Science Scholar, works with her lab partner during an introductory chemistry class at the University of Texas of the Permian Basin in Odessa, Texas..

But as with Perry’s other price reduction proposal — the $10,000 degree — higher education leaders warn that the state’s institutions may prove too diverse for a shared approach to reining in tuition prices.

“I think it probably has to be done on a case-by-case basis,” said Raymund Paredes, the state’s higher education commissioner. “It is good to have anything that calls attention to the fact that we can’t continue on this unsustainable path of increasing tuition and fees, but it’s a mistake to think you can do it with equal ease or the same amount of difficulty at all institutions.”

That certainly proved true of $10,000 degrees, a proposal that was greeted with a skepticism that still lingers in some pockets of the state. In the intervening year, a handful of models, varying in design and accessibility, have been instituted around Texas. Yet another approach to the $10,000 degree is to be announced next month at Angelo State University in San Angelo.

With a new science building that could accommodate more students than were in the university’s science courses, UT-Permian Basin found itself uniquely positioned to answer Perry’s call. Taking a cue from the airline industry, university leaders realized that after they had enrolled enough students to cover their costs, they could offer a less-expensive rate to fill additional seats with high-performing students.

“Could we do this if we hadn’t just finished a building and had some costs to grow into? Probably not,” said Bill Fannin, the university’s provost and vice president for academic affairs.

While other universities’ $10,000 degrees were devised by combining college credits earned in high school with community college and university courses aimed at niche majors, UT-Permian Basin’s was the first $10,000 option that was entirely contained on a single campus. But some question the school’s approach, saying it provides what is effectively a scholarship.

“I think it is fair to say that what we are looking for is a $10,000 baccalaureate degree unsubsidized,” Paredes, the higher education commissioner, said.

He also suggested that the state could lower the price of college by encouraging more paid internships that offer academic credit and by using free online courses.

He is optimistic about a degree the Texas Higher Education Coordinating Board is developing with South Texas College and Texas A&M University-Commerce, scheduled to debut in the fall of 2013. The degree, a bachelor’s in organizational leadership, will rely heavily on Internet-based instruction and will allow students to move at their own pace by earning credit based on mastery of a concept rather than time in a classroom.

Dan Jones, the president of A&M-Commerce, was among the early skeptics of Perry’s $10,000 degree proposal. “In fact, using existing models, it probably is not feasible,” said Jones, who came around after realizing the potential of competency-based advancement to lower students' expenses. “You can’t do this and deliver it the way we deliver our degrees now.”

Some schools have not yet tried.

David E. Daniel, the president of the University of Texas at Dallas, which at more than $11,000 for tuition and fees for one academic year has the highest public university tuition in the state, said his administration has been too busy keeping up with its rapid enrollment growth to consider a $10,000 degree. But it is the only public university in Texas that currently has a four-year guaranteed tuition model for all of its students. Those who continue into a fifth year pay the set rate of the class that entered the year after them.

When Daniel was an administrator at a public university in Illinois, he opposed the idea of guaranteed tuition when Rod Blagojevich, a Democrat who was the governor at the time, signed it into law in 2003. But Daniel grew to appreciate the predictability it offered, both for the administration’s budget and for the students — not to mention the extra incentive it gave them to graduate on time.

The University of Texas at El Paso offers a similar, optional plan for its students, but it has not taken off. Diana Natalicio, the university’s president, said it has a large population of low-income students who must work to pay for their education and often cannot graduate in four years.

“They are hesitant to make those kinds of commitments,” she said. “They’d rather just pay as they go.”

At the University of Texas at Austin, student reaction to such proposals has also been mixed, though President Bill Powers said he was open to revisiting the guaranteed tuition concept. “I think that’s a very important idea the governor is raising that we ought to give a lot of thought,” he said.

With the start of the 2013 legislative session three months away, lawmakers are considering how they might do that.

“It’s a complex issue that has to be studied, but it has to be evaluated in terms of all its ramifications,” said state Sen. Judith Zaffirini, D-Laredo, who is the chairwoman of the Senate Higher Education Committee. “This is Texas. Texas is a huge and complex state. One size does not fit all. What works in one area will not in others.”