Maria Guadalupe Guzman Romo wasn’t concerned about legalizing pot in Texas when she marched on the state Capitol last weekend.

But there she stood anyway, just a few feet away from a giant banner that called for an end to the prohibition of marijuana and the taxing of hemp. Guzman Romo was there because of her son, a former Mexican army soldier who disappeared from Ciudad Juárez in 1993, decades before the current drug war that has claimed more than 60,000 lives.

“I tell them not to feel defeated. I have been fighting 19 years and I haven’t stopped,” she said of the advice she offers relatives of those who were recently kidnapped or murdered. “And I won’t stop until I find my son, because I handed him over alive and alive they shall return him to me.”

Guzman Romo was part of the Caravan for Peace with Justice and Dignity, a group started by Mexican poet Javier Sicilia and whose members have been affected by drug-related violence in Mexico. Sicilia’s son was murdered in the central Mexican city of Morelos in 2011, prompting the poet to become a harsh critic of U.S. and Mexican drug policies. 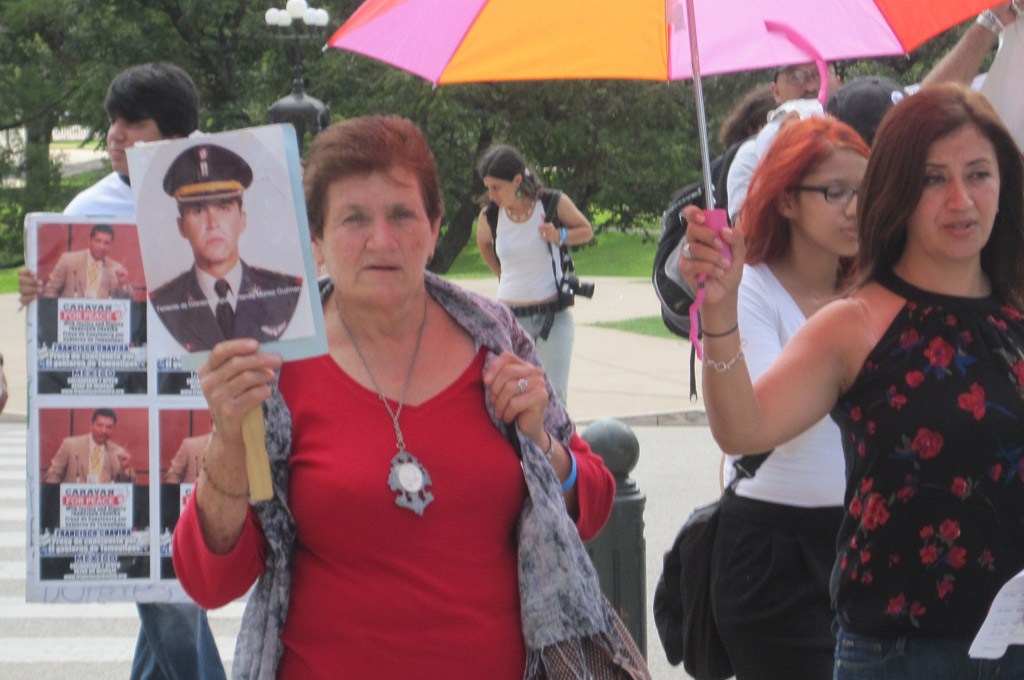 Enlarge photo by: Julián Aguilar
Maria Guadalupe Guzman Romo marches with her daughter on the grounds of the state Capitol during the Caravan for Peace's stop in Austin.

Guzman Romo doesn’t mention the United States' war on drugs, but her cause has been joined by Americans who have found an opportunity in the publicity surrounding the violence in Mexico to shine attention to their own agendas in the U.S. Unlike Guzman Romo, whose mission is to bring attention to her son’s disappearance, others have joined the caravan out of opposition to an initiative that they say is causing such murders and disappearances in Mexico — and destroying families in America.

“I think what is important is the binational nature of this caravan,” said Roberto Lovato, the founder of Presente.org, an online Latino advocacy organization. “The drug war has been a fantastic failure here in the United States, if you look at more than 2 million people being incarcerated, families destroyed by that incarceration, a trillion of our tax dollars utterly wasted [on the drug war]. So we have law enforcement officers who lost their brothers and their sisters in the law enforcement world, and people who have lost family members in Mexico.”

The efforts in America are attracting more attention, which Lovato said has led to harsh rebukes from some Americans.

“We’re starting to get some attacks from people that say, ‘Hey, this is my country. Why are you Mexicans telling me what to do with my country?’" said Lovato, who was born in San Francisco. He added that his reaction to such comments is, “No, it’s also my country.’”

Lovato said joining the movement is part of standing up against what he sees U.S. drug policy has done to the country. And in doing so he’s drawing attention to issues familiar to border residents, whether U.S. or Mexican citizens.

The caravan has garnered enough attention — at least in Texas — that a unique honor was bestowed upon the group. State Rep. Sylvester Turner, D-Houston, awarded Sicilia with a resolution praising the poet’s efforts. The nonbinding resolution, which is mostly symbolic in nature, also criticizes U.S. drug policies.

“Although our nation spends in excess of $40 billion a year combating the drug trade, the United States remains the principal destination for drugs produced in and transported through Mexico,” it states. “Moreover, many of the firearms found at crime scenes in Mexico have been traced to sources in the United States; interdiction initiatives have not resulted in the decline of drug abuse.” 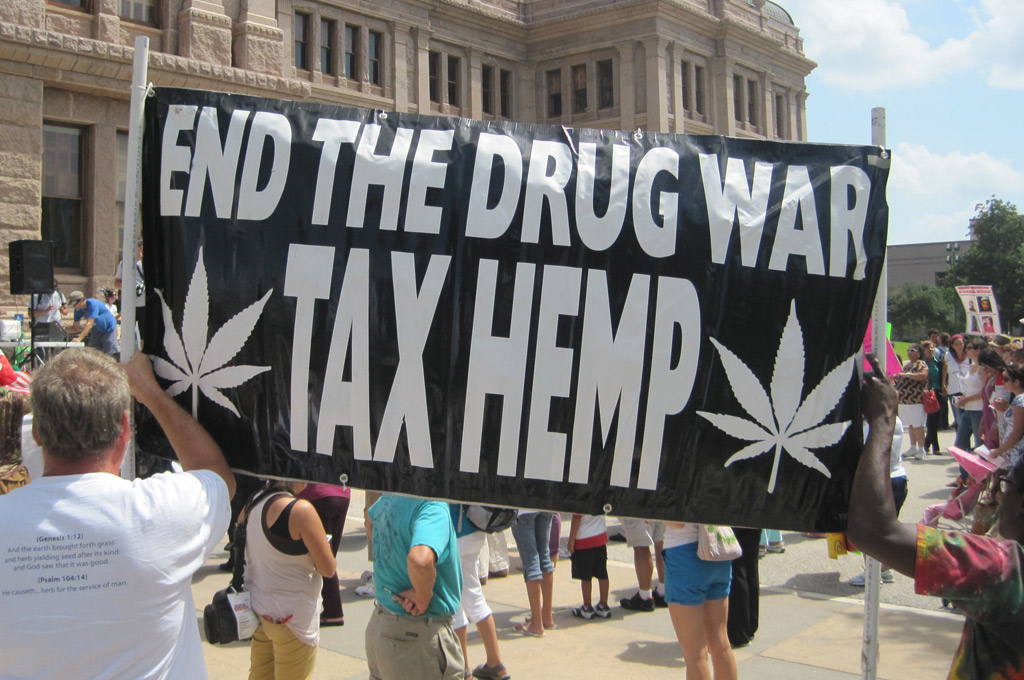 Enlarge photo by: Julián Aguilar
Supporters of marijuana legalization join the Caravan for Peace with Justice and Dignity in Austin.

Supporters of America’s drug strategy say the current method is needed to stop and treat addiction, despite opponents’ beliefs that swelling jail populations are a result of punitive measures. The White House Office of National Drug Control Policy recently said it has committed more than $10 billion for drug education and treatment programs, and the Obama administration has unleashed a crackdown on medicinal marijuana dispensaries across the country for more than a year.

And while pro-legalization efforts have long been associated with counter-culture movements of the past or libertarian groups of the present, there are a growing number of former law enforcement officers intent on changing that perception.

“The drug problem isn’t just an American problem, and the harm that prohibition of drugs causes in the world is phenomenal,” said Terry Nelson, the Granbury representative of Law Enforcement Against Prohibition, which he said boasts more than 60,000 members worldwide. Nelson's 32-year stint working for the federal government includes service with the U.S. Border Patrol, the Department of Homeland Security and U.S. Customs. “Hundreds of thousands are dying in the Western Hemisphere alone, it’s got to stop," he said. "The drug war is a war on people, it’s not a war on drugs.”

Nelson said his group has been involved in the effort since the beginning and LEAP members were in Mexico City for the caravan’s initial planning. But other pro-marijuana groups insist they haven’t hijacked the movement and are aware of the negative connotation legalization brings. But they remain undeterred.

“I have heard a little rumbling, but I hope that once they meet us and talk to us, they will recognize that we’re just focusing on one area that will bring peace,” said Cheyanne Weldon, the secretary for the Texas chapter of the National Organization for the Reform of Marijuana Laws and outreach coordinator for NORML’s Women’s Alliance. “People that are looking at the big picture just need to understand that we’re focusing on one small part that helps bring about that change. We’re not carrying a big rolled joint or trying to smoke on the Capitol grounds or something like that.”