Alice McAfee has worked as a janitor for nearly 30 years. She has seen a lot of changes in the industry, she says, but not for the better. Her work has become harder, her hours have been cut and her wages have not kept up with inflation.

McAfee has joined more than 400 other Houston janitorial workers in protests over their working conditions. They are asking for a wage increase, from $8.35 an hour to $10 an hour, to be implemented over a three-year period. Many janitors have participated in marches and have held sit-downs in the lobbies of the buildings they clean, in acts of civil disobedience that have resulted in several arrests.

McAfee said the widening pay disparity between her and the people whose offices she cleans is unfair.

"Who should be ashamed is the big CEOs," McAfee said. "They have to remember that what's on the bottom holds them up."

This is the fifth week of striking and protests by members of the Service Employees International Union against their employers, including ISS Facility Services, GCA Services, ABM Janitorial Services, United Building Maintenance and Pritchard Industries. Employees with these companies clean the downtown high rises for some of Houston's wealthiest businesses, including JPMorgan Chase, ExxonMobil and Wells Fargo. The cleaning companies contract with building owners to provide services.

The SEIU and the five companies will begin their latest round of negotiations Wednesday. Paloma Martinez, an SEIU spokeswoman, said that talks last Thursday and Friday were productive but did not result in an agreement.

Martinez said the same contractors are paying janitors better wages in different cities. In Detroit, the rate is $11.17 an hour, and in Chicago, it's $15.45 an hour. She said Houston's low wages mean that janitors can't get by without government aid, putting a burden on taxpayers.

"Houston is the strongest economy in the nation on paper, but in reality, it isn't," Martinez said. "We are subsidizing the corporations, and that's bad for our social safety net, and for the taxpayers."

Tim Reilly, the lawyer representing ISS Facility Services, GCA Services and ABM Janitorial Services, said in a written statement that the janitors are given paid vacation and health benefits, despite the fact that most of the positions are part time. He said the janitors are asking for too much money in too short a period of time, especially because they received a raise earlier this year.

"We recognize that, in these economic times, customers need to manage costs very carefully. Despite these economic challenges, the union’s proposal was simply unrealistically high – an additional immediate 8% wage increase, above and beyond the 3% hike already paid earlier this year, and what would amount to a 20% increase in wages alone over the next two-and-a-half years," Reilly said.

The other two companies involved in the negotiations, United Building Maintenance and Pritchard Industries, did not return calls for comment. 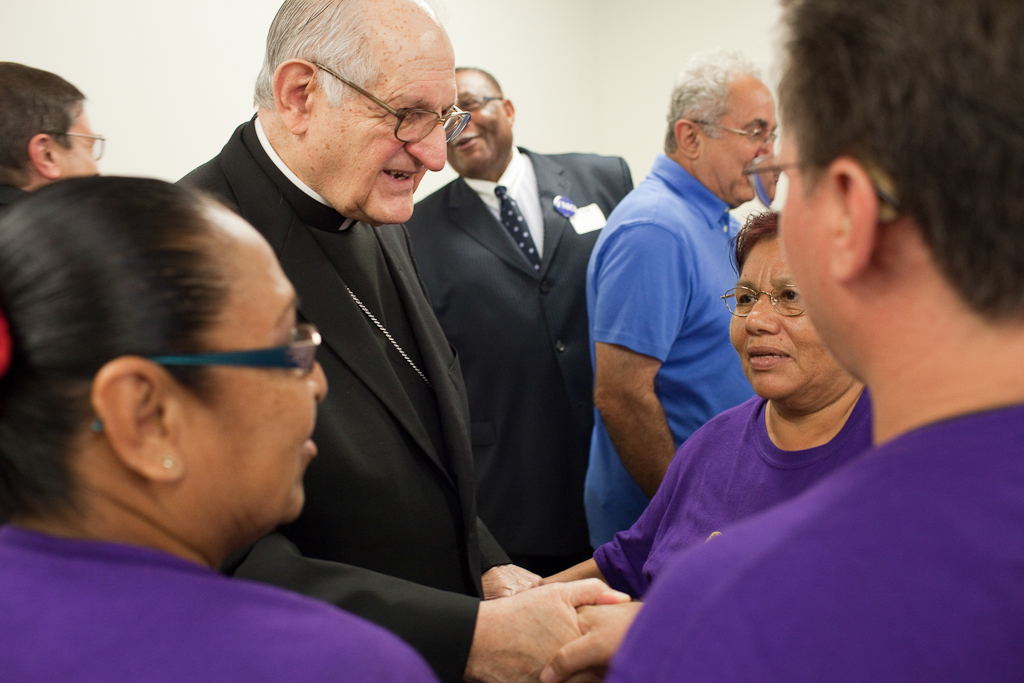 Houston clergy have united to insist that the talks continue. The Metropolitan Organization, a group dedicated to uniting people and institutions to shape public policy, gathered clergy from different faiths and denominations Thursday to urge the union and employers back to the negotiating table. The clergy insisted they were not taking sides, but instead asking for both parties to come to a compromise.

“We all have a need to feel a part of the American dream, and take pride in where we work and live,” said Rabbi David Lyon, a senior rabbi at Congregation Beth Israel in Houston.

Clergy members called for an end to the acts of civil disobedience by the janitors as long as talks remained productive, a request SEIU leaders have said they will honor.

“We have discouraged such actions because they disturb the people in the community that might otherwise be supportive,” said Daniel Cardinal DiNardo, Archbishop of Galveston-Houston.

For the clergy, this not just an economic issue, but a moral issue. This is a sentiment shared by many of the janitors, including Maria Lopez. A janitor in Houston for the past five years, Lopez said she can't afford basic items like her daughter's favorite breakfast cereal on her current wage.

"We just want [our employers] to do something that is right for our families and for Houston,” Lopez said.