The Texas Tribune analyzed 86 overturned convictions, finding that in nearly one quarter of those cases courts ruled that prosecutors made mistakes that often contributed to the wrong outcome. This multi-part series explores the causes and consequences of prosecutorial errors and whether reforms might prevent future wrongful convictions.

Kerry Max Cook had been out of prison for about three years when his son was born.

As Kerry Justice Cook slept in his crib, his father would peer down at his tiny son and cry, battling back suicidal thoughts that have haunted him since experiencing unspeakable horrors during 20 years on Texas’ death row.

K.J. is 11 now, and talking seems to be one of the mature and articulate tween’s fortes. He introduces his father to crowds at speaking engagements across the world.

“I find it quite amazing that he was able to go there for 22 years and go through every obstacle which he had to go through,” the fifth-grader wearing a Mickey Mouse T-shirt said, brushing shoulder-length blond hair away from his face. “I think he’s the most respectable man that I know.”

Cook, 56, was convicted of the 1977 rape and murder of Linda Jo Edwards in Tyler. That conviction was ultimately overturned. A second trial ended in a hung jury, and a third ended with a conviction that was reversed after a court found it was tainted by prosecutorial misconduct. Before Smith County attempted to try Cook a fourth time, he agreed to a plea deal in 1999. He pleaded no contest and was set free. DNA testing subsequently revealed another man’s biological matter on the victim’s clothes.

Cook has written a book about his experience, actors like Tim Robbins have portrayed him in a play about exonerations and he teaches young people about overcoming adversity. In the eyes of the law, though, Cook remains a convicted murderer. Normal life, he said, is beyond his reach.

“This freedom means nothing with a conviction,” he said. “Because this isn’t freedom. This is another prison cell.”

Thirteen years after his release, Cook is battling with Smith County prosecutors to officially clear his name. Cook is seeking new DNA testing that he hopes will result in the addition of his name to a list of at least 86 Texas inmates whose convictions were overturned from 1989 to 2011. In an analysis of court rulings, news reports and pardon statements in each of the 86 cases, The Texas Tribune found that in nearly a quarter of the cases — 21 in total — courts found prosecutorial errors that in most instances contributed to the wrong outcome.

The State Bar of Texas, though, said it had publicly disciplined very few prosecutors in recent years. Some lawmakers and criminal justice reform advocates have called for increased accountability for prosecutors whose errors result in wrongful convictions that forever change the lives of innocent people and their families.

Cook says his efforts to clear his name are doomed if he must continue to fight in Smith County, where the Texas Court of Criminal Appeals ruled that prosecutorial and police misconduct has “tainted this entire matter from the outset.” He has asked an appeals court to move his case.

“Everything that could go wrong in the prosecution did, and has, and still continues to,” Cook said.

Smith County prosecutors past and present insist that Cook is guilty. Cook, they have argued, is simply after millions of dollars he would be entitled to from the state if he were officially exonerated. Current Smith County Criminal District Attorney Matt Bingham declined to comment.

During Cook’s first trial in 1978, prosecutors argued that he had beaten, stabbed and mutilated Edwards — who lived in the same apartment complex as him — in a sexual frenzy triggered by a movie that depicted a cat mutilation. At age 22, Cook was sentenced to death.

The U.S. Supreme Court in 1988 vacated his first sentence because a state psychologist interviewed Cook without his lawyers present. Cook’s second trial in 1992 was declared a mistrial because the jury was deadlocked. His third trial in 1994 resulted in another death sentence.

The Texas Court of Criminal Appeals reversed that sentence in 1996, citing the prosecution’s “numerous undisputed acts of misconduct” in Cook’s case, such as withholding exculpatory evidence — information that could help prove his innocence — and making a deal with a witness who lied and then lying about the deal to the jury.

The court ruled that prosecutors did not tell Cook’s lawyers that the 16-year-old daughter of James Mayfield, Edwards' boss with whom she had been having an affair, had made repeated death threats against her. The affair became public after Edwards attempted suicide, and Mayfield was forced to resign from his job as a dean at Texas Eastern University (now the University of Texas at Tyler).

Mayfield, his wife and his daughter said they were together at home on the night of Edwards’ murder, and no one from the family was charged with a crime. Efforts to reach Mayfield through his former attorney were unsuccessful.

Prosecutors also misrepresented to the jury a deal they made with a jailhouse snitch, the appeals court ruled. Edward “Shyster” Jackson testified that Cook confessed to the killing. The prosecutor told jurors there was no deal, but the court found that Jackson’s murder charge was reduced to involuntary manslaughter. He later admitted his testimony was fabricated.

The court also found that prosecutors introduced misleading testimony about the age of Cook's fingerprints at the scene. The officer testified that the age of the fingerprints put Cook in the apartment at the time of the murder. But the officer later said his testimony was a mistake that could not be scientifically supported and the prosecutor pressured him to falsely testify.

While most of the prosecution’s errors were remedied by the third trial, the court said, that proceeding too was tainted by the use of questionable testimony from a witness who was with Cook the night of the murder. Robert Hoehn told jurors that he and Cook had sex and that Cook was aroused at the mutilation scene in the movie. But prosecutors didn’t tell Cook’s lawyers that Hoehn gave contradictory testimony to the grand jury, saying that there was no sex and that Cook hadn’t paid attention to the movie that allegedly inspired his sexual brutality. 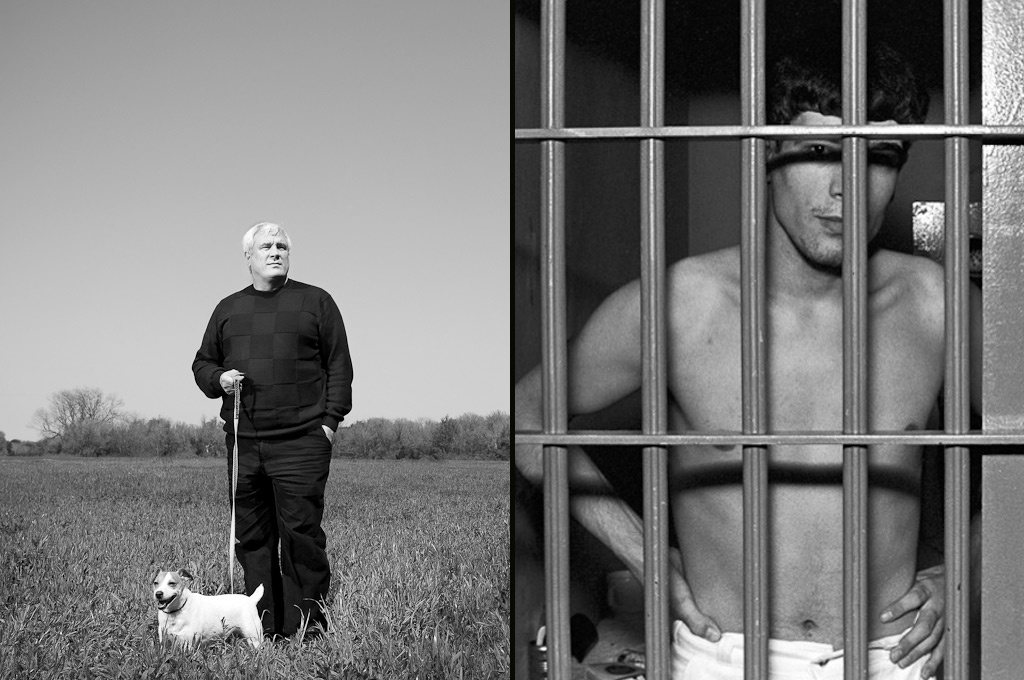 The court overturned Cook’s conviction but allowed Smith County to prosecute him again. In 1999, as Smith County District Attorney Jack Skeen prepared for Cook’s fourth trial, semen found on underwear that Edwards wore the night of the attack was submitted for DNA testing. Before the test results were revealed, Skeen offered Cook a plea deal.

Cook was 42 then. His brother had been murdered, and his father died while Cook was in prison On death row, Cook said he had been repeatedly raped and abused. He pleaded no contest, refusing to admit guilt but knowing that legally he would remain a convicted murderer.

Later, the DNA analysis showed that the semen belonged to Mayfield, who had previously testified that he and Edwards had not had sex for weeks before her death.

“I was wrongly convicted,” Cook said. “But you just have the stain, you have the scarlet letter, because you’re not judicially exonerated.”

After the testing, The Associated Press reported, Smith County investigators said the DNA results could not show when the semen was deposited and that the stain didn’t implicate Mayfield.

Cook has tried to move on after his release. He got married and started a family. He adores K.J. They ride bikes together, read books, go to movies and even take the occasional jog — K.J. said his once rail-thin dad is trying to lose a few pounds.

“As much as you can give that to one person or one thing in your whole life, this kid saved my life,” Cook said of his son. “Not me. Not God. K.J. saved my life.”

But finding regular employment with a murder conviction and a 20-year hole in his resume is tough.

“I can’t overcome that,” Cook said, sitting in the living room of the apartment he rents from a friend whose name is on the lease. “Today, I’m just as poor as the day I walked out.”

This year, Cook launched a final effort to clear his name, asking for DNA testing on the remaining evidence in the case. But if the decision about his ultimate guilt or innocence remains in Smith County, Cook worries the outcome will be unfair.

He sees a number of familiar names at the Smith County Courthouse. The wife of the original prosecutor in Cook’s case, A.D. Clark III, is a Smith County district judge. So is former District Attorney Skeen, who presided over Cook’s second, third and fourth trials and is Clark’s first cousin. And the husband of state district Judge Christi Kennedy, who is set to preside over the DNA testing, worked for Skeen in the district attorney’s office at the time of Cook’s second and third trials.

As in other Texas cases where prosecutorial errors contributed to overturned convictions, Clark was never publicly disciplined by the State Bar of Texas despite the Texas Court of Criminal Appeal’s rebuke of his office's work. He is now a lawyer in the Texas attorney general’s regional office in Tyler. He declined to be interviewed for this story but has denied wrongdoing.

Cook and his lawyers allege they’ve uncovered more oddities in the Smith County prosecutor’s files. They learned that one of the lead investigators, Sgt. Eddie Clark, kept the knife used to murder Edwards at his home as a souvenir. And they were informed that much of the evidence in the case was destroyed without Cook’s knowledge just months after state lawmakers passed a law requiring that defendants be notified when such items were to be discarded.

“When I was thought to be a criminal, they put me in jail for 22 years,” Cook said. “Why can’t they be punished for their wrongdoings?”

While Smith County agreed to allow the DNA testing, Bingham, the current prosecutor, has fought to keep the case in Tyler. He argues that the prosecutors who committed misconduct are no longer with the district attorney’s office and that Kennedy has demonstrated no bias against Cook. In court filings, Bingham wrote that Cook and his lawyers have presented a “litany of unfounded and bad faith charges” against the county.

In an interview earlier this year, Assistant Smith County District Attorney Michael West questioned Cook’s motives for pursuing exoneration more than a decade after his release.

“It seems like if I was all fired up and gung ho about being innocent, I wouldn’t have waited so long,” West said.

Cook, though, said he doesn’t care about the potential $1.6 million he could receive in state compensation if he were exonerated.

“There’s not enough money in the world to pay me for what they’ve done to me,” Cook said. “I just want my life back.”

K.J., meanwhile, said the battle has been hard on his father. But he said he understands.