The amount of Texas electrical power produced by coal has plunged so far this year, and cheap natural gas appears to be the cause.

A report this week by Potomac Economics, a consulting company that serves as an official monitor for the Texas electricity market, showed that coal-fired electricity production dropped by 30 percent in January compared with January 2011. Nuclear power production also fell, while wind grew by 45 percent and natural gas was up 22 percent.

Figures from just one month offer only a limited snapshot, partly because the weather in different seasons has a big effect on electricity demand and the type of sources used.

Nonetheless, "the explanation is pretty simple," said Dan Jones, who directs Potomac Economics' program monitoring the Texas grid, referring to the drop in coal-fired electricity power and the rise in the gas figure. Natural gas prices are very low, so "the more efficient combined-cycle gas units are more economic to run than some of the more costly coal units."

Natural gas prices in January hit 10-year lows, and have risen only slightly since then.

(The chart below shows the percentage that each fuel type contributed to the Texas grid in the month noted.) 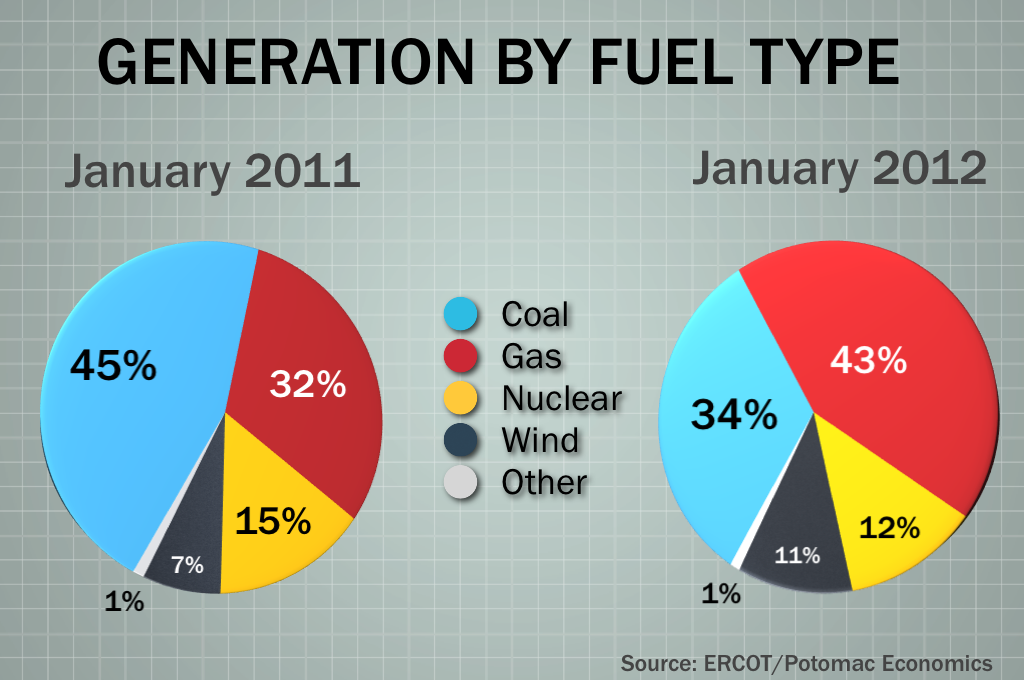 Nuclear production has fallen by about 25 percent in January 2012 compared with January 2011 because one of Texas' four nuclear plant units has been offline. Jones declined to say which one, but one of two units at the South Texas Project in Matagorda County has been offline since late November, due to equipment problems, as Reuters has reported. Dave Knox, a spokesman for NRG, which runs the plant, declined to say when the unit would be back in service.

By May or June, however, as the weather gets hot and people turn on air conditioners, things could change. "Even if gas prices remain low, the coal units will be required to meet the increasing loads," Jones said.

Jones did not know exactly why wind power production has jumped. But Texas, the nation's wind power leader, has continued to add wind farms, and the amount of wind in a given day or month can vary considerably.