Moments after Amy Hagstrom Miller heard the news — that a panel of federal judges had directed Texas to immediately enforce the most controversial tenet of the state’s new abortion sonogram law — her phone started ringing off the hook. It was the doctors who perform abortions at the five Whole Woman’s Health clinics she founded in Texas, confirming that they must start playing the fetal heartbeat and showing the image of the fetus to their pregnant patients.

For Hagstrom Miller and many abortion and women’s health providers statewide, performing these sonogram-related actions is an affront — to patients who have thought long and hard about their decisions, and to doctors who believe they are not medically necessary. The constitutionality of the practice, which supporters say is the only way to ensure women know the consequences of their decision, is still being challenged in court.

But from a logistical standpoint, the sonogram itself — which abortion clinics say they already perform, and show to any woman who asks — is far from the most complicating element of the new law. This past fall, doctors were required to start performing a transvaginal sonogram at least 24 hours ahead of an abortion, a shift they say has had frustrating consequences for clinics and patients.

Abortion opponents say the rationale behind the 24-hour delay is simple: Abortion should not be held to a lower standard than any other surgical procedure — where patients have a doctor’s visit to learn the explicit details of their condition one day, and have the medical procedure on another.

For the clinics, however, it has been a bureaucratic nightmare. Now, the physician performing the abortion — not an ultrasound technician, for example, or a secondary doctor — must conduct the sonogram on a separate day, a scheduling struggle when doctors providing elective abortions are in short supply and rotate between clinics.

“They’ve had to set aside a whole other day doing ultrasounds, visits that in most parts of medicine would be dedicated to people with less training than a physician,” Hagstrom Miller said. “The effect on their travel schedule, on their reimbursement, on patients’ access to them has been tremendous.”

For the patients, the process of obtaining an abortion has lengthened. Instead of having a sonogram and receiving an abortion in a single day, they must spread out their visits, often taking a second or third day off of work, paying double for transportation and child care, and delaying the procedure. Hagstrom Miller said that on a recent weekend, a family played soccer all day in a nearby field while their mother waited to have an abortion.

And at the intersection of the abortion provider and the patient is conflict: women blame clinics, not the Legislature, for the multiday inconvenience, leading to angry phone calls from patients and hours of extra time on the phone scheduling appointments.

“We’re asked, ‘Why are you doing this to me? Why are you making me wait? I have to go to work; I could lose my job,’” said Dorothy Reno, director of clinics for Planned Parenthood of the Texas Capital Region. “These are things we hear from patients every day.”

Supporters of the sonogram law say that these complaints are merely mild inconveniences — and that they are the bare minimum that should be required before pregnant women make a life-changing decision. They say abortion providers are the ones disrespecting their patients by rushing them through a difficult process.

“This paternalistic attitude, that we’re saddling women with too much information, really does an injustice,” said Elizabeth Graham, director of Texas Right to Life. “It underestimates the capability of women to make a decision with more information, not less.”

Graham also said she cannot be sure that Texas abortion providers are actually abiding by the new sonogram rules, because there has been no evidence of enforcement so far.

But abortion providers say that in Texas, where they are under such heightened scrutiny and face tougher restrictions seemingly every time lawmakers convene in Austin, they cannot afford not to play by the rules. 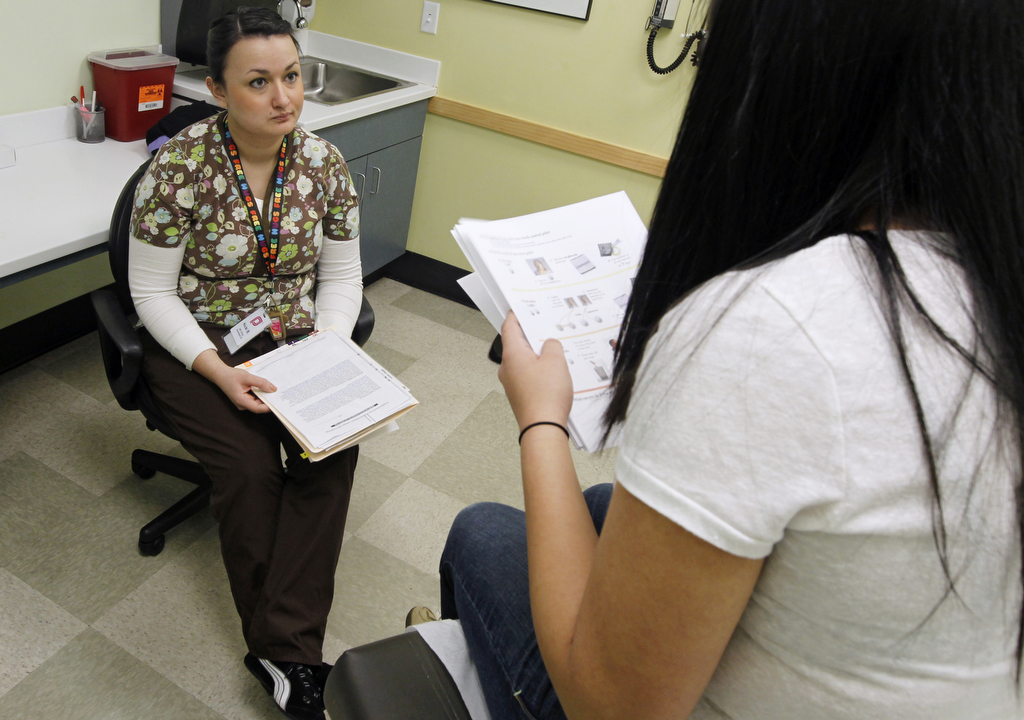 Enlarge photo by: Erich Schlegel
A young woman goes over state-mandated paperwork before her abortion.

At both Planned Parenthood clinics and independent clinics, directors say they immediately notified their doctors on Jan. 10, when they learned that a federal court had ordered Texas to enforce the provision requiring pregnant women to hear the heartbeat and view the sonogram, or else listen to a verbal description of the fetus. They did it despite the fact that they had received no memos, no phone calls, no directions whatsoever from the Texas Department of State Health Services, Hagstrom Miller said. (The department said it expects to release guidelines soon.)

“There’s a lot of confusion about what we’re required to do and whether we’ll be held accountable for it, whether it’s part of the inspection, if we’ll be punished, if doctors will face sanctions,” she said.

If the goal is for women to rethink having an abortion, providers argue, it is not working. Clinic directors said they have not had a single woman change her mind in the 24-hour period between her sonogram and her abortion. Abortion opponents and advocates for crisis pregnancy centers say that anecdotally, they have not heard of any either.

But DeVillez said her Austin crisis pregnancy center provides sonograms, too, and that with the right support, seeing that image can be a magical, life-changing moment for scared women.