In the last 10 years, the majority of Texas Supreme Court decisions have favored corporate interests over consumers, and the panel of judges has repeatedly overstepped its authority by overturning jury verdicts and interpreting the law to benefit the rich, according to a scathing report set to be released today by consumer advocacy group Texas Watch.

“The Texas Supreme Court has marched in lock-step to consistently and overwhelmingly reward corporate defendants and the government at the expense of Texas families,” the report says.

Texas Watch says in its study, which reviewed court decisions in more than 624 cases in the past 10 years, that the trend started when Gov. Rick Perry began appointing Supreme Court justices in 2000. The report argues that data from court rulings shows that Perry’s appointees “corporatized the court.” But the court, a former justice and conservative groups disagree with the report's conclusions, arguing that a statistical analysis doesn't provide enough context.

The state's highest civil court ruled in favor of defendants — mostly corporations and government entities — in about 74 percent of the 624 consumer cases brought before the panel in the last decade, according to the report.

Alex Winslow, executive director of Texas Watch, said the high court’s nine justices, who are all Republicans, are too similar to one another. Many represented corporations in court before they became justices, and 85 percent of the time, they agreed with one another.

“There’s not the kind of deliberative discussion and debate you’d like to see in the highest court in the state,” Winslow said. “There’s no way for the law to evolve.” 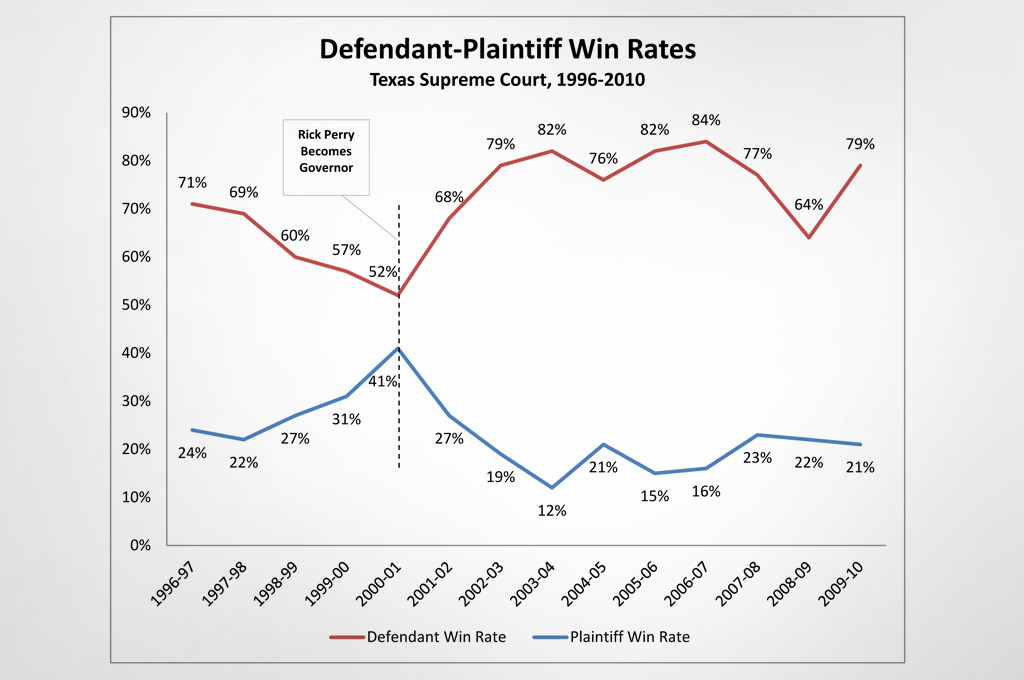 The court has overturned jury decisions 74 percent of the time, according to the report, and it interprets the law “broadly or narrowly, as the circumstances warrant, to reach a result that favors the powerful.”

“The court is not giving that proper deference to a jury,” Winslow said.

Bill Peacock, vice president of research at the Texas Public Policy Foundation, said he doesn’t think the large percentage of defendant wins means that the Supreme Court favors corporations. He attributed the numbers to the court interpreting laws that the Legislature has passed to limit frivolous lawsuits, which are often brought by consumers against businesses.

In a case the Texas Watch report notes as particularly anti-consumer, John Summers sued Entergy. That company owned the power plant he worked for in Bridge City, where he was injured on the job. But Summers didn't work directly for Entergy; he was hired by a contractor to work at Entergy's plant. The question before the Supreme Court was whether Summers could sue Entergy even though that company did not hire him.

The court decided that the contractor's employees were also Entergy’s employees and so Summers' injuries were covered under Entergy's worker's compensation plan. As a result, he could not sue Entergy for negligence in his injuries.

Winslow said that is a “cake and eat it too situation” for employers. Employees of contractors will receive less compensation for their injuries, because they are considered employees of the larger corporation for purposes of workers' compensation. But the contractors' employees won't get the same kind of health insurance and other benefits that corporate employees receive. 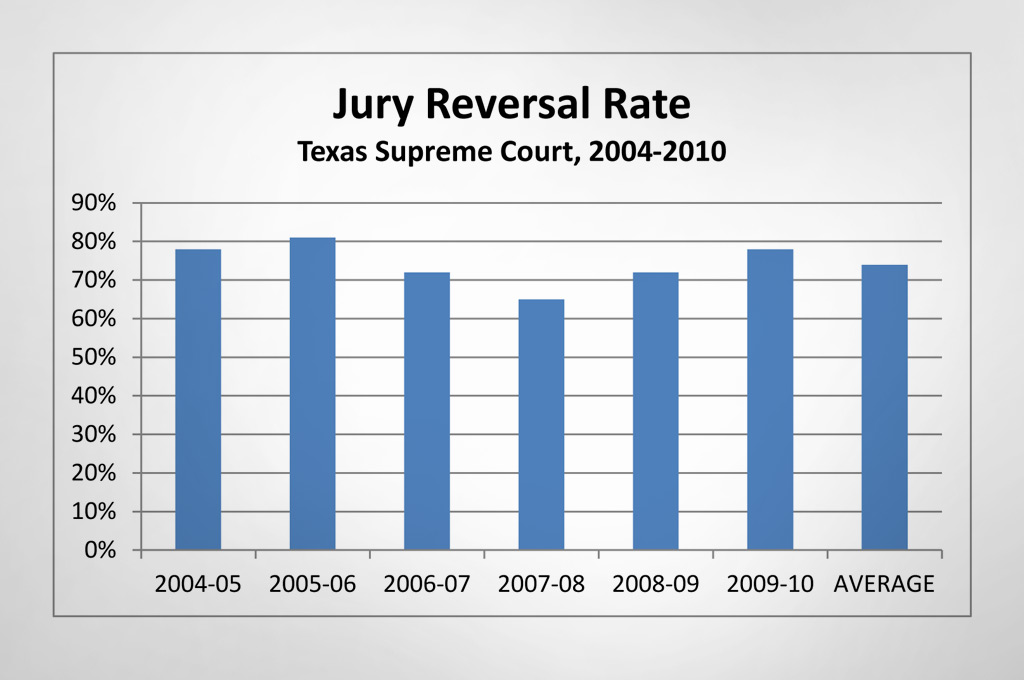 Osler McCarthy, the Supreme Court staff attorney for public information, disagreed. He said people often read cases too simply and decide that they have much broader implications than they actually do.

“What I see the court doing is trying to follow the law,” he said. “The statute allowed one company to be general contractor and premises owner.”

Former Supreme Court Justice Scott Brister also said evaluating the Supreme Court isn’t as simple as compiling statistics. The justices, he said, only consider cases in which they might reverse the lower court's decision.

“They only look at 10 percent of the cases. They’re not going to take a case that looks right, and the consumer won,” Brister said.