From the moment Texas Gov. Rick Perry stepped into the presidential race in August to the instant he suspended his campaign in South Carolina, The Texas Tribune was there. Here's a photographic look back, with images by Bob Daemmrich and Ben Philpott. 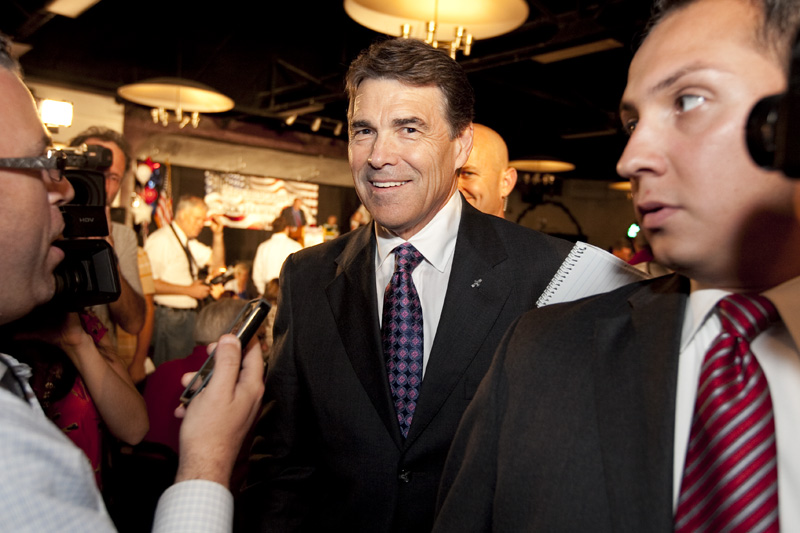 On Aug. 14, 2011, the day after entering the presidential race, Texas Gov. Rick Perry campaigns in Waterloo, Iowa, during a three-day swing through the Hawkeye State. 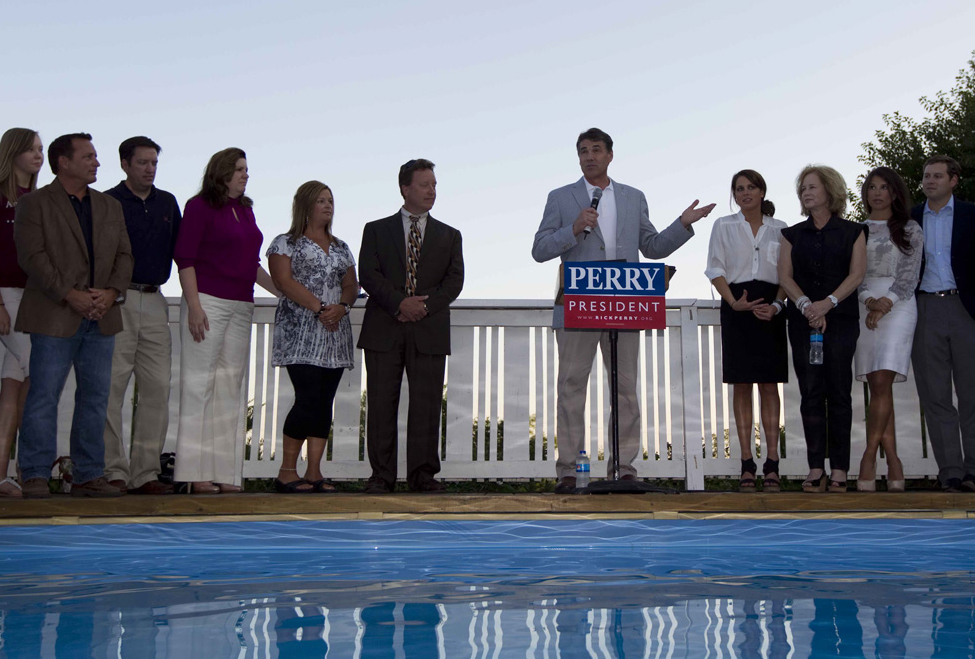 Presidential hopeful Perry campaigns at a private reception in Cedar Rapids, Iowa with, left to right, daughter Sydney Perry, daughter in law Meredith Perry, and son Griffin Perry on the evening of August 15, 2011. 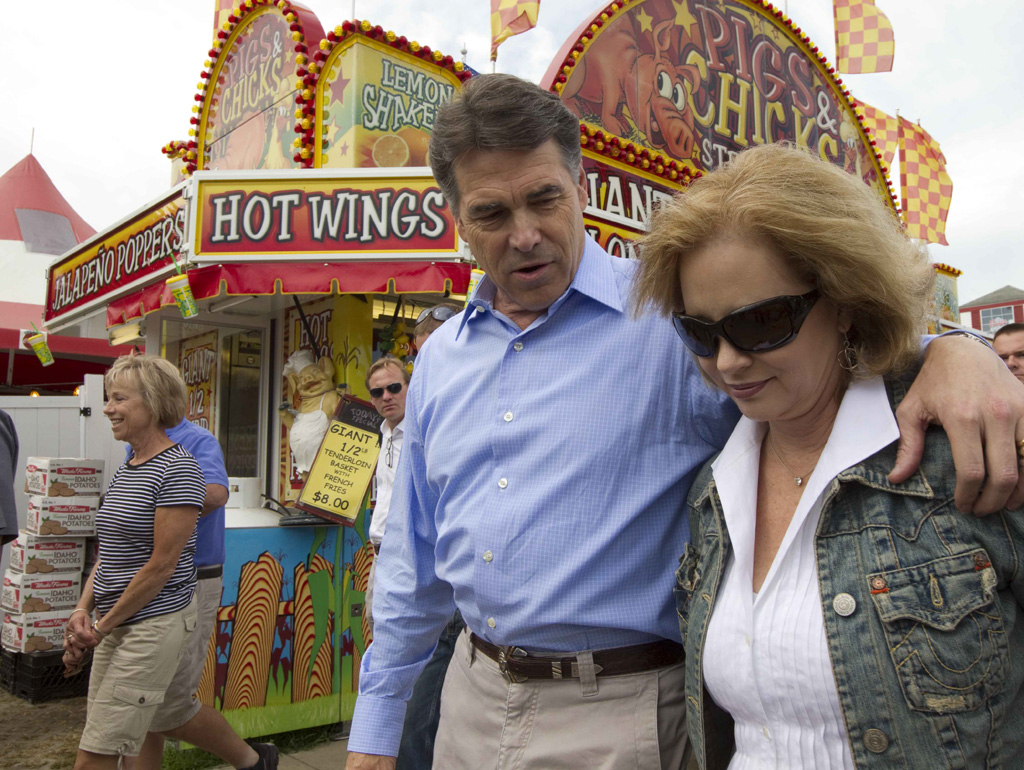 Perry walks through the Iowa State Fair with wife Anita Perry on Aug. 15, 2011, two days after entering the race for the Republican nomination for President.. 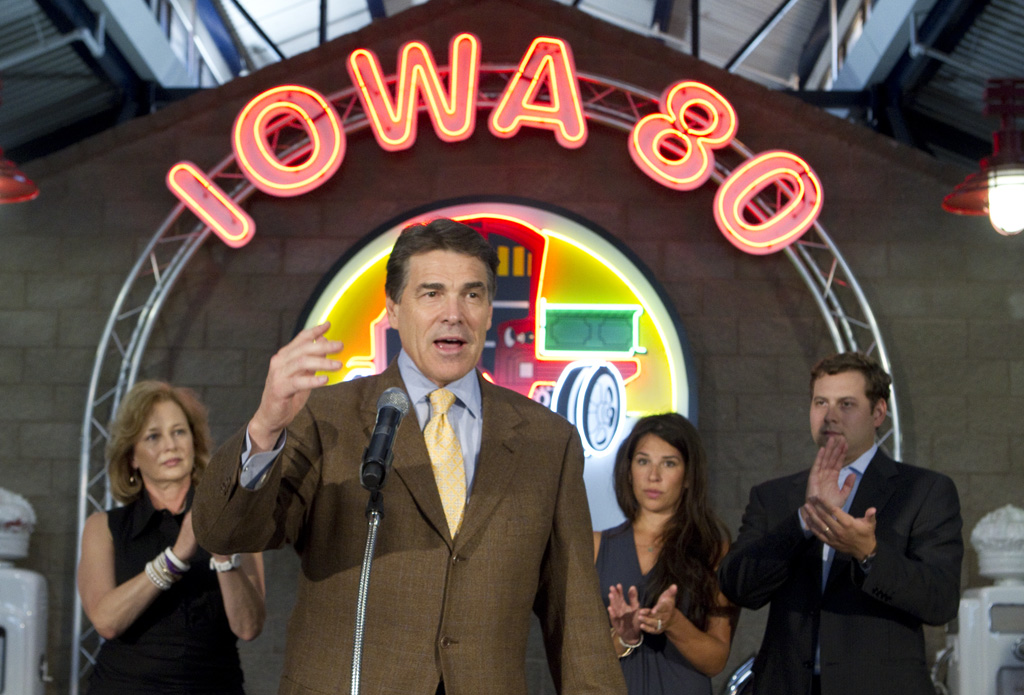 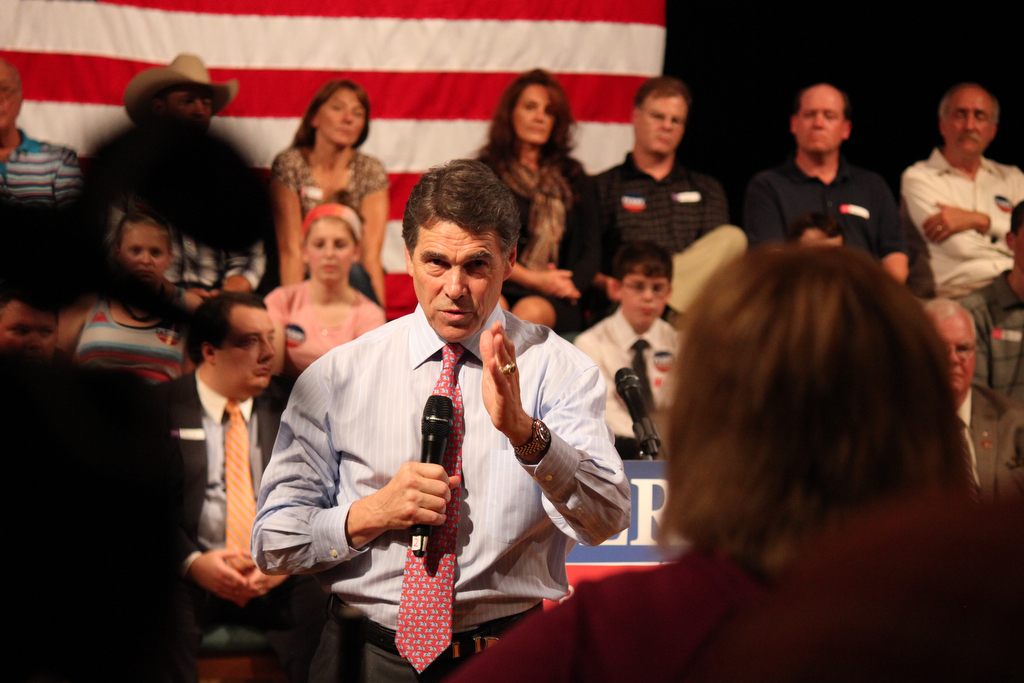 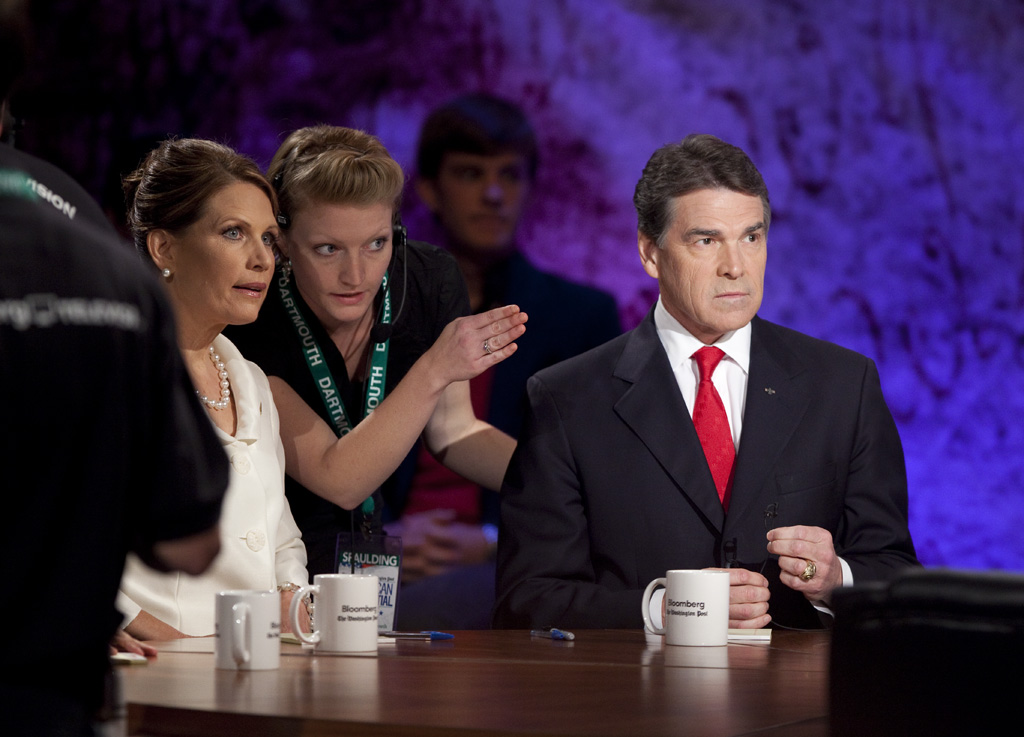 A technician instructs candidates Michelle Bachmann and Rick Perry at the start of the Republican debate at Dartmouth on October 11, 2011. 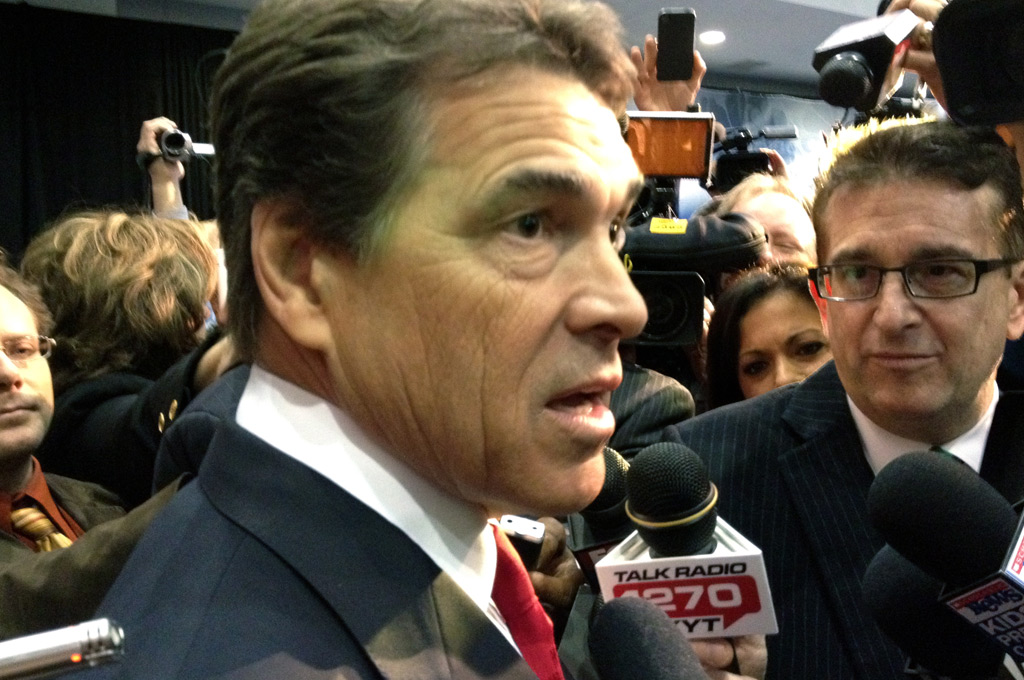 Rick Perry explains what went wrong in the notorious November "oops" debate where he forgot the third agency he wanted  to shutter. 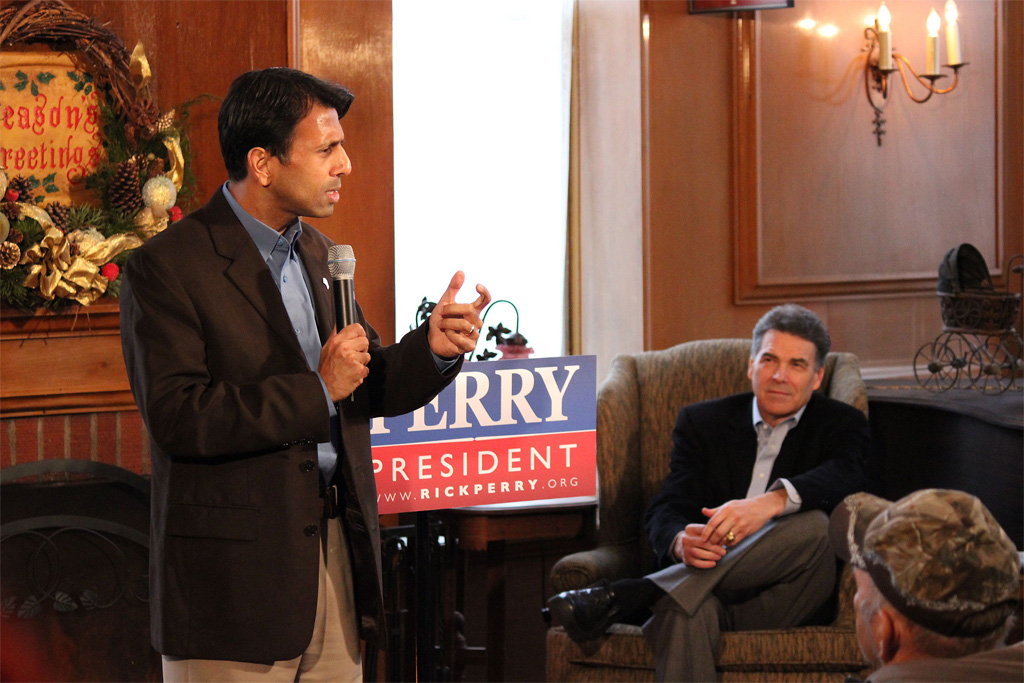 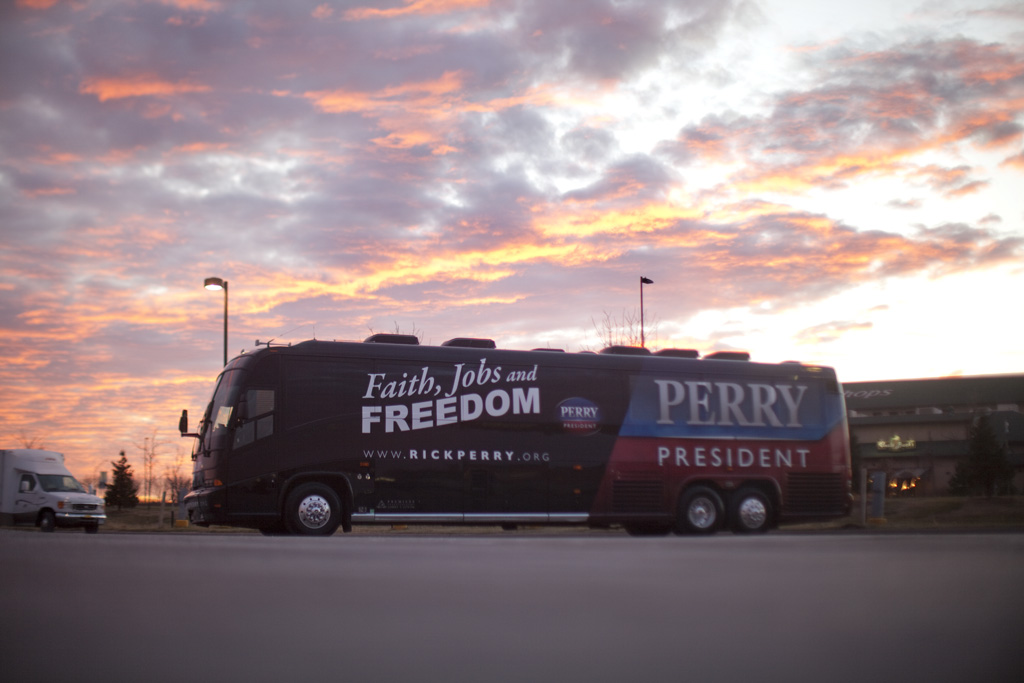 The Perry for President campaign bus sits in a parking lot in Council Bluffs Iowa on December 26, 2011. 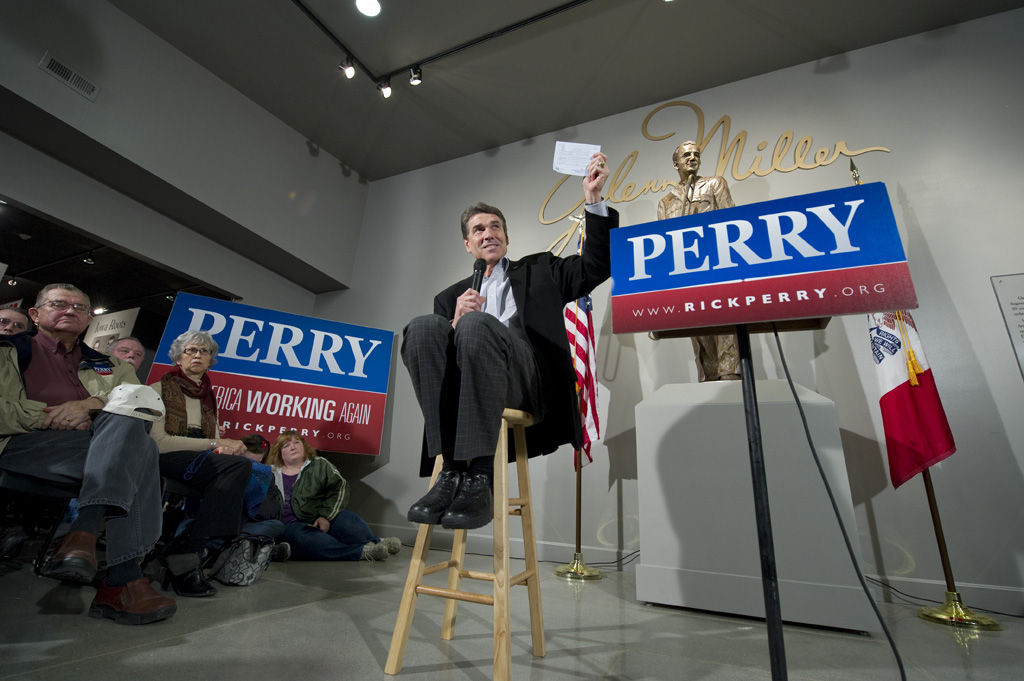 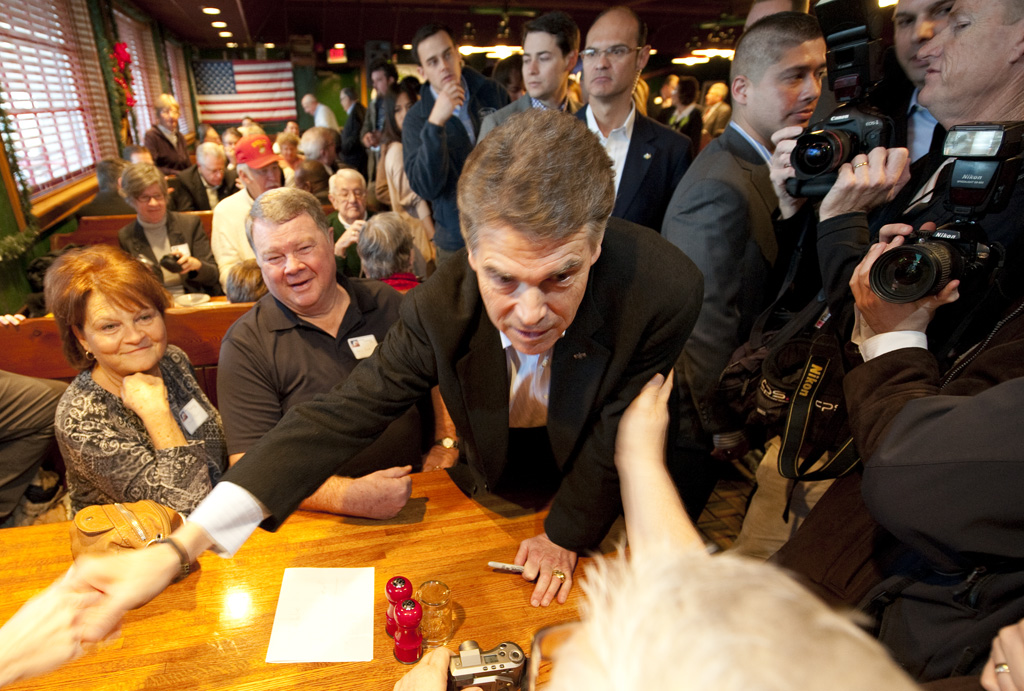 Rick Perry works the crowd at a breakfast meeting in Urbandale, Iowa on December 28, 2011. 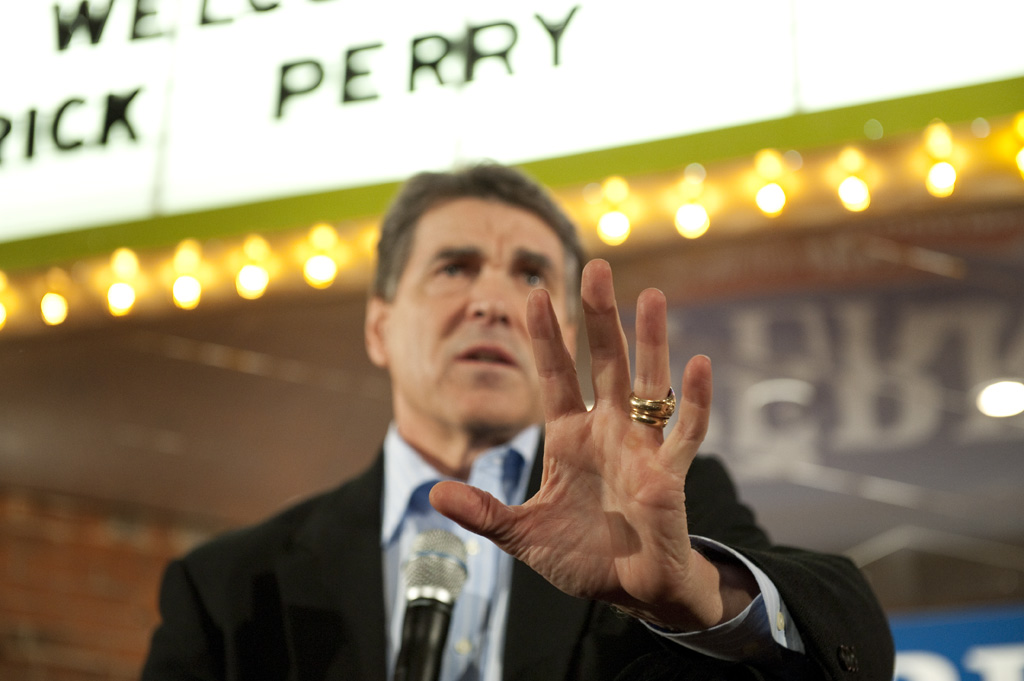 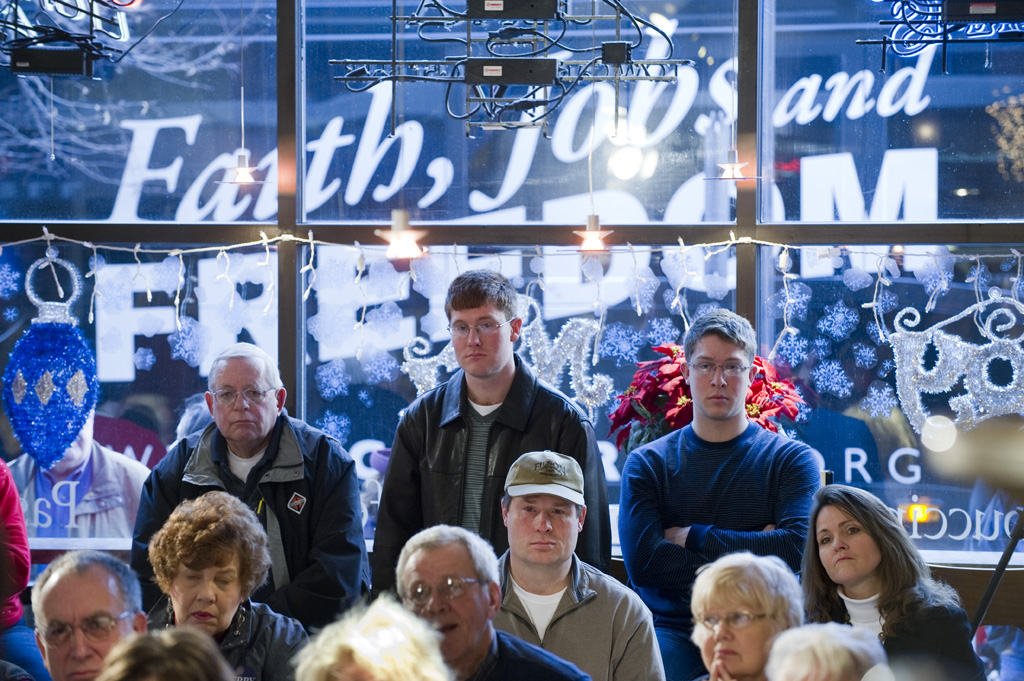 Iowans listen to a campaign speech while the Perry for President bus is parked outside the Blue Strawberry Coffee Company in Cedar Rapids, Iowa on December 28, 2011. 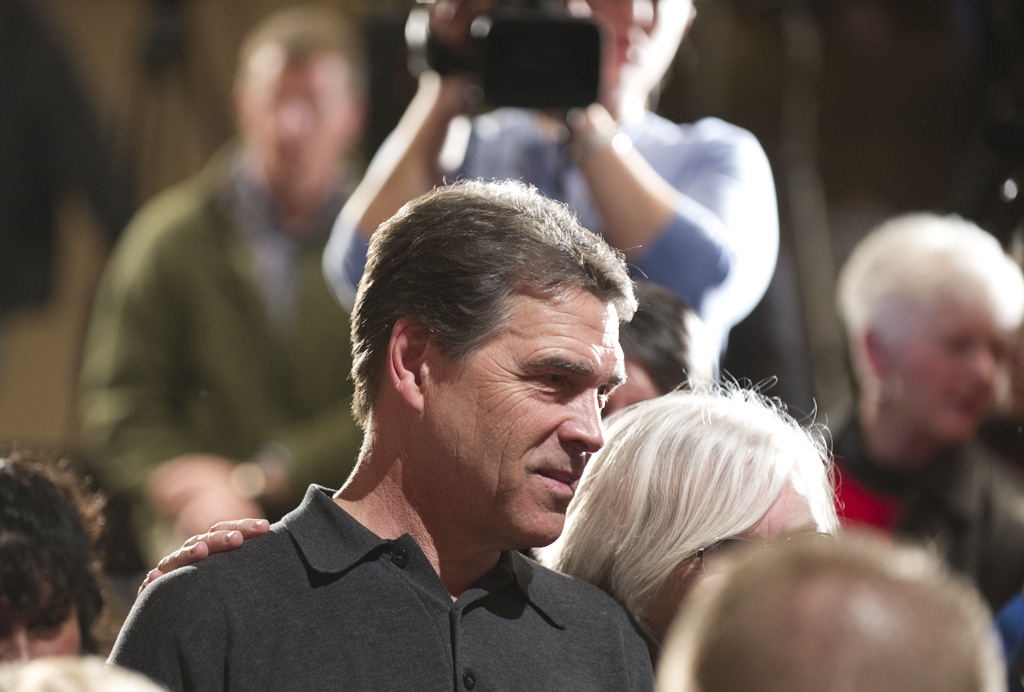 A casual candidate Rick Perry poses for photographs with Iowans December 29, 2011 in Marshalltown. 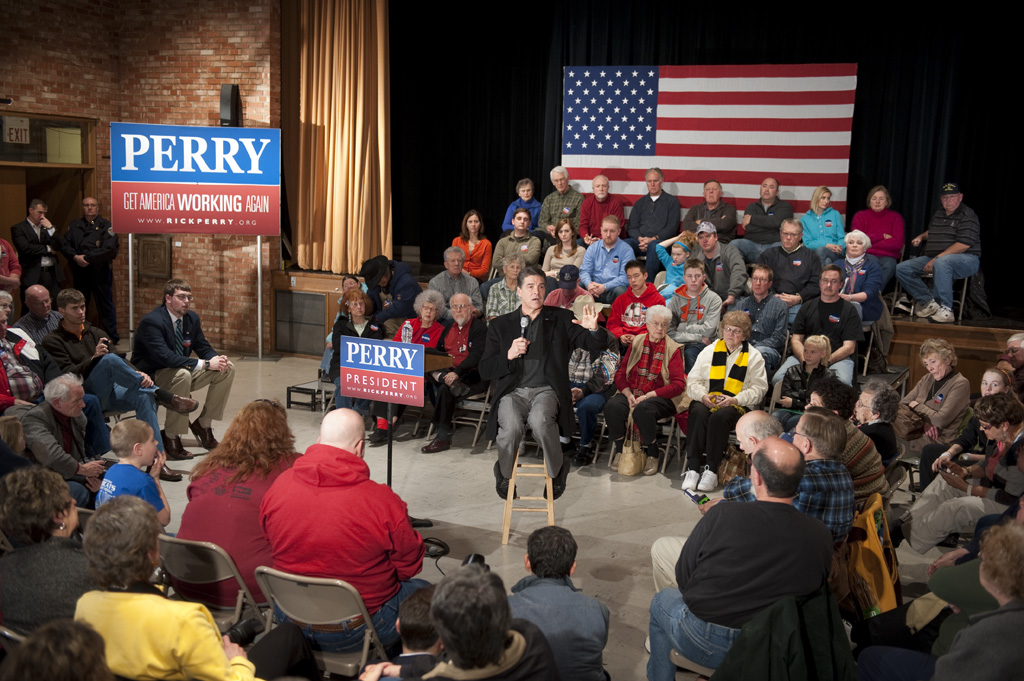 Rick Perry talks with east central Iowa voters during a town hall in Marshalltown on December 29, 2011. 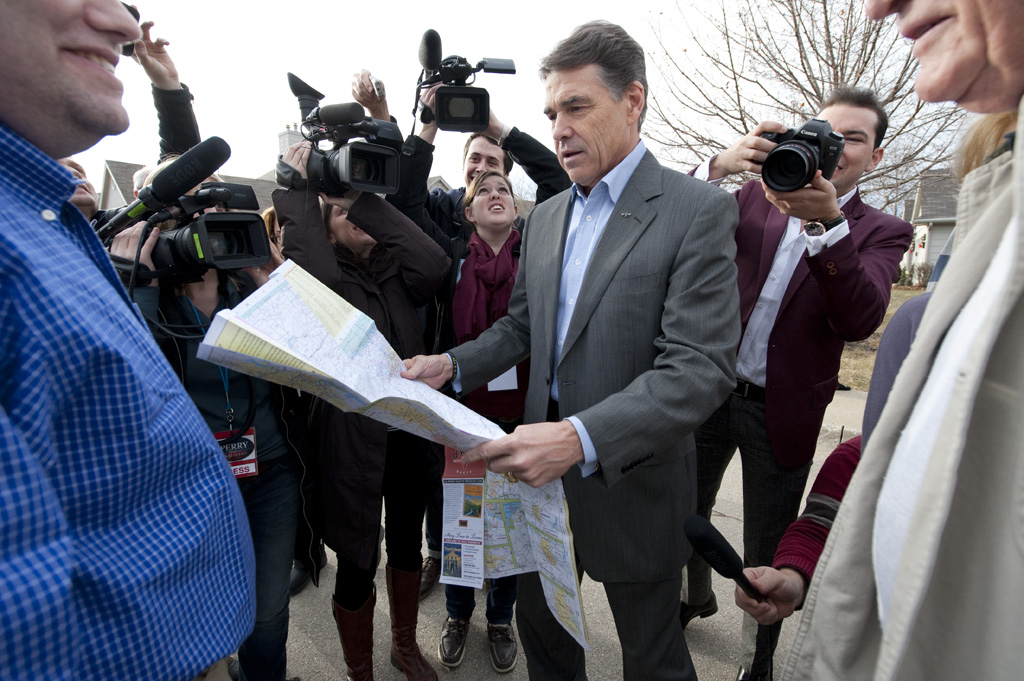 Gov. Rick Perry unfolding a Texas map on Dec. 31, 2011, to show Des Moines residents where his hometown of Paint Creek is located. 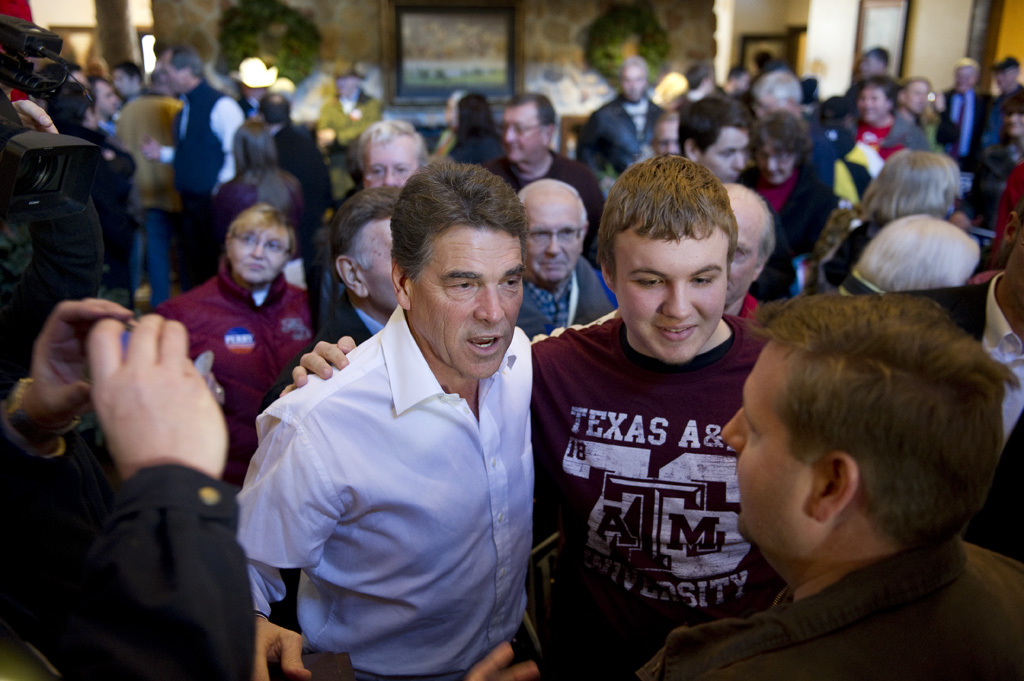 Rick Perry makes a final push with Iowa caucus voters during a meet and greet at Bloomers Coffee Shop in Fort Dodge, Iowa. 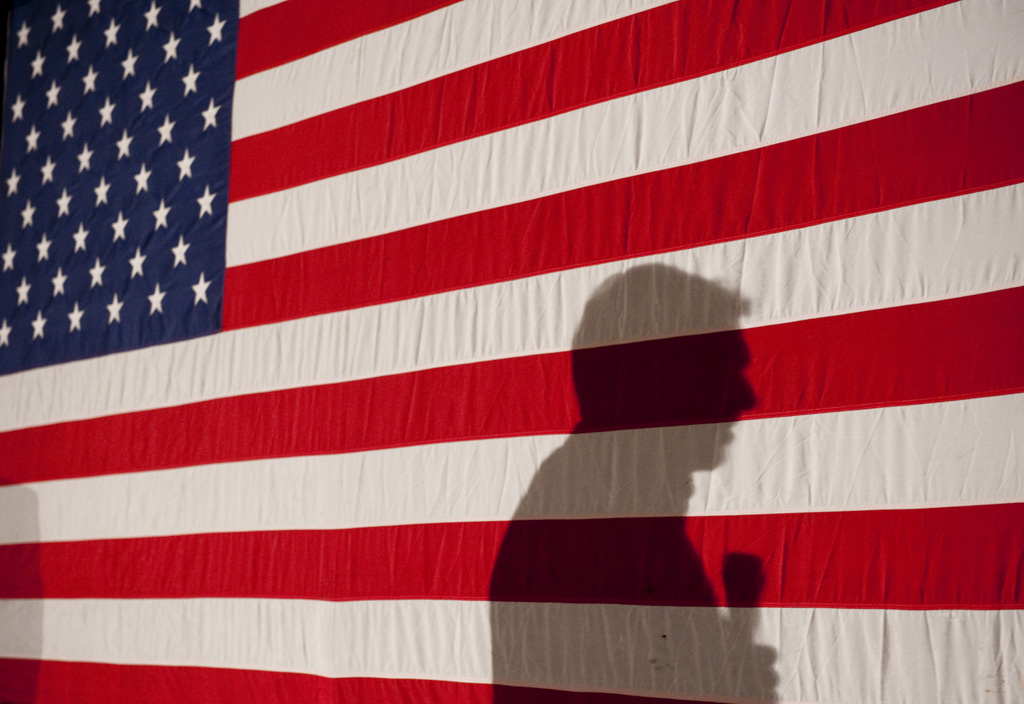 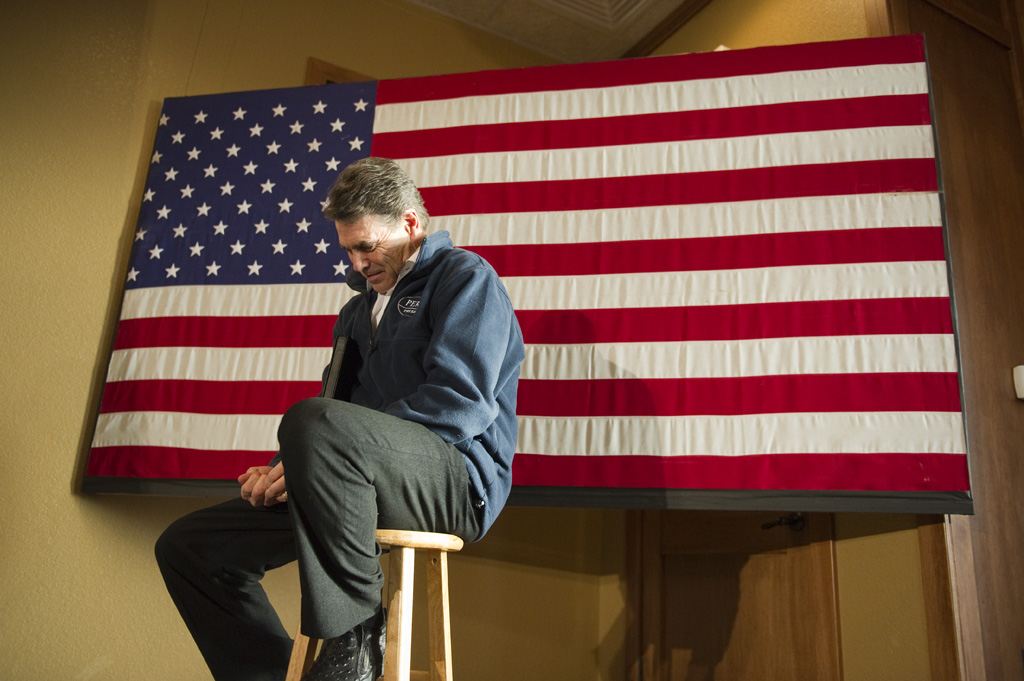 Republican presidential candidate Rick Perry makes a final push with Iowa caucus voters during a meet and greet at the Santa Maria Vineyard in Carroll, Iowa on Jan 2, 2012. 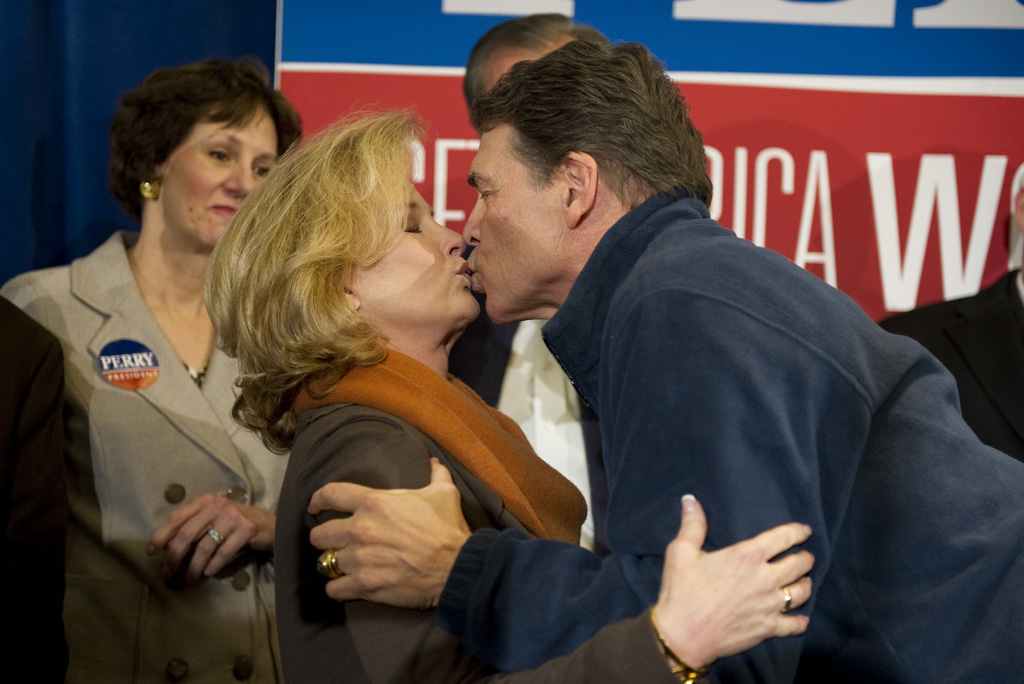 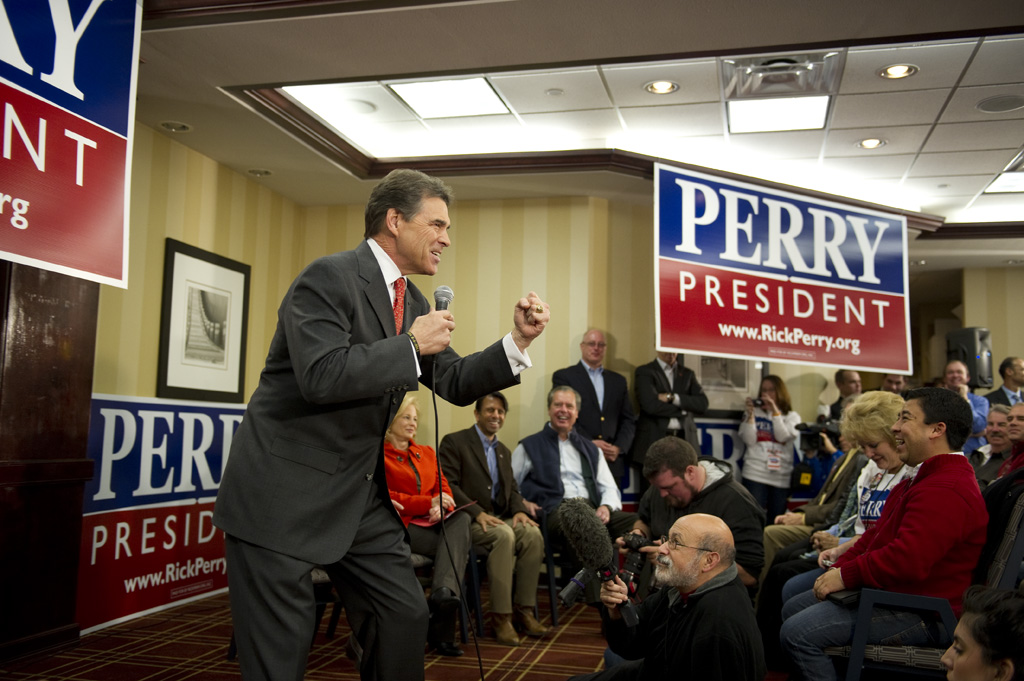 Rick Perry makes an impassioned speech before his Texas strike force volunteers the morning of the Iowa Caucuses on January 3, 2012. 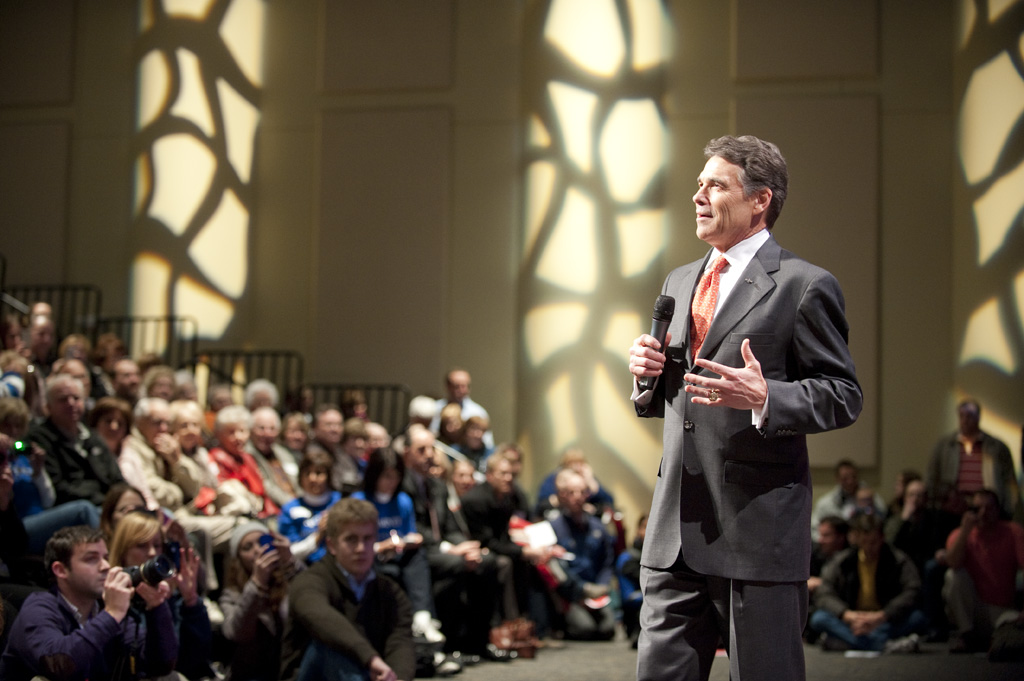 Rick Perry speaks at a caucus prior to voting in west Des Moines, Iowa on Tuesday. 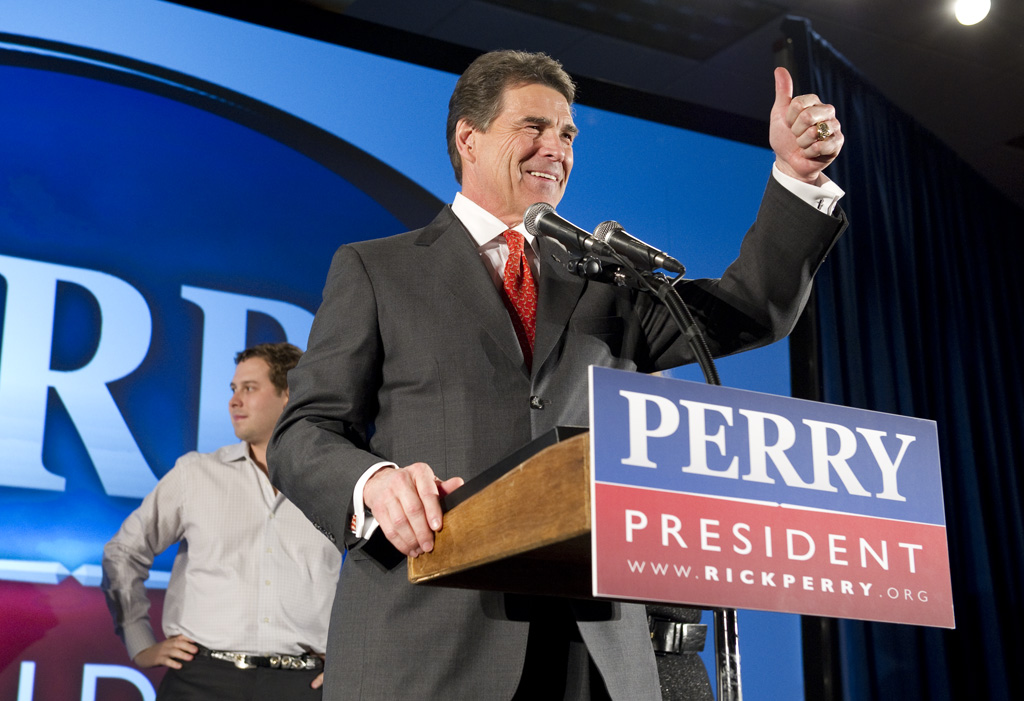 After finishing fifth in Iowa, Rick Perry annouces that he is temporarily suspending his campaign and returning to Texas to assess the future. 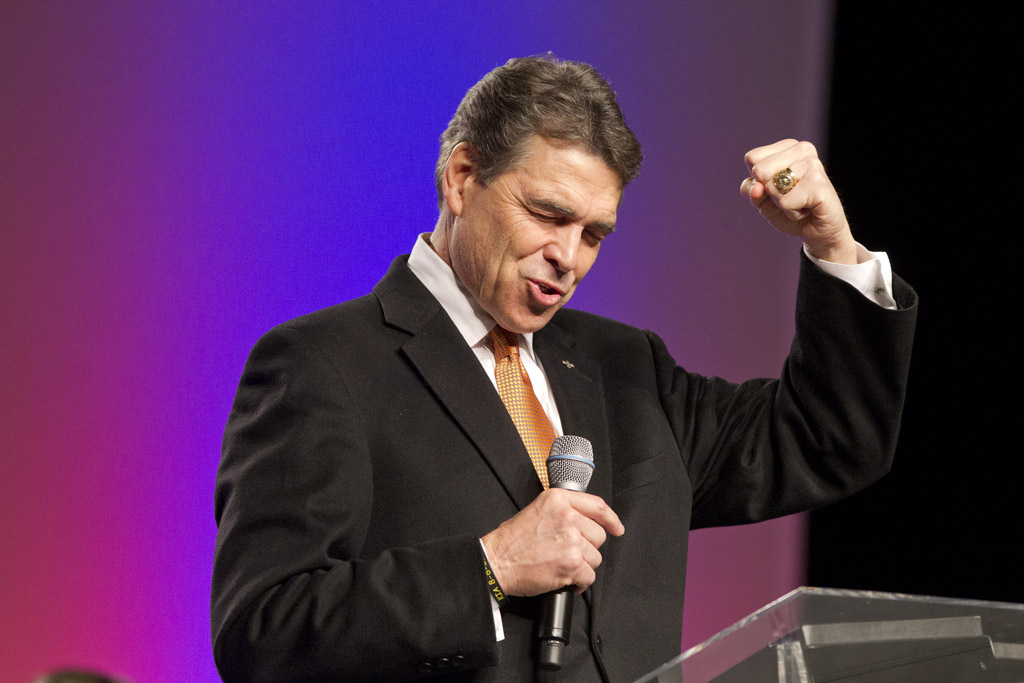 Rick Perry speaks at The Response in South Carolina, an evangelical prayer gathering at the TD Convention Center in Greenville, as he continues his long shot bid for the Republican nomination for president. 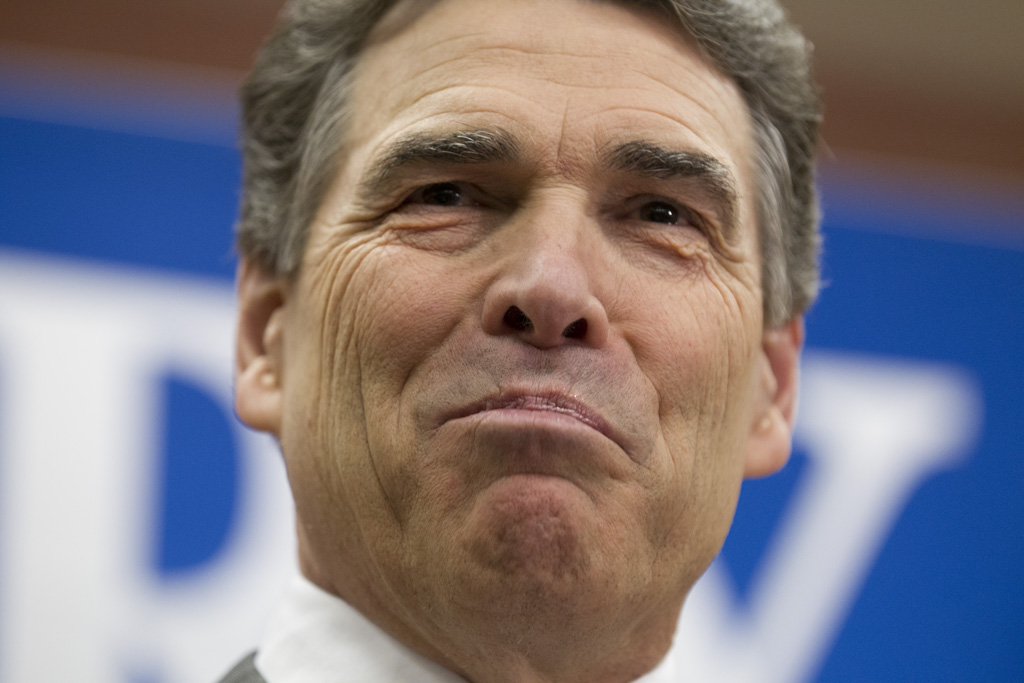 Rick Perry drops out of the presidential race two days before the South Carolina primary.