The Tribune loves infographics, including the recent one posted by Gov. Rick Perry's presidential campaign called “State of Texas Economy.” But like any information distributed by a political campaign, it deserves the scrutiny of a fact-checking exercise.

Texas actually created 387,900 jobs during this time period — slightly more than the Perry campaign reported — according to data released by the Bureau of Labor Statistics. It’s also true that Texas created more jobs during this period than any other state in the nation.

But the omission of Texas’ current unemployment rate makes this fact slightly misleading. Texas' unemployment rate went up from 8 percent to 8.5 percent, during the period in which those jobs were created. That means job creation hasn’t kept pace with the size of the workforce, which has increased because of migration and a large population of young Texans entering the workforce.

This statistic also overlooks another fact: When the recession hit Texas in 2009, the state lost 296,300 jobs from August 2008 to August 2009. Texas still hasn’t caught up to employment levels from before the recession and is currently 25,600 jobs behind the level of unemployment in August 2008.

Claim: 38 percent of the nation’s new net jobs were created in Texas in the past two years

Perry’s campaign calculated this number from June 2009 to June 2011, but when the Tribune looked at data from August 2009 to August 2011, we found the percentage is a little higher. According to the federal employment data, during that period the U.S. had a net increase of 939,000 jobs. Since 387,900 of those jobs were in Texas, the Lone Star State actually contributed 41 percent of national job creation.

Claim: Texas has the lowest overall tax burden among the 10 largest states (Texas has no state income tax)

The Perry campaign is right that Texas, unlike many other large states, has no personal income tax, which lowers the tax burden on residents. And unlike Alaska and Florida, which also do not have an individual income tax, Texas does not have a corporate income tax either.

But we're not exactly clear how the Perry campaign justifies its claim. One of its cited sources, the Tax Foundation, lists Texas as No. 13 on its annual State Business Tax Climate Index for fiscal year 2011. One of the 10 largest states by population is ranked above Texas: Florida, at No. 5. Earlier this year, the Tax Foundation issued its annual ranking of state and local tax burdens, with Texas having the 45th-lowest percentage in 2009. And Kiplinger Financial Finance Magazine last November named the five best and five worst states for retiree taxes. Texas was in neither group.

One reason it may be misleading to say Texas has the “lowest overall tax burden” is that it depends on what you consider a tax. Texas has more than 60 separate taxes, fees and assessments used to collect revenue for the state.

Texas collected $87 billion from residents in 2010. More than $19 billion of that revenue — the greatest amount from a single state-issued tax — was collected from the sales tax, which affects everyone in the state. Many experts say sales taxes also put the greatest “burden” on low-income households, because a greater percentage of their income is subject to the tax.

Texas’ budget deficit has been attributed in part by some experts to the franchise tax, which lawmakers revamped in 2006 to replace revenue lost when they lowered local property taxes. Those experts say the franchise tax never sufficiently filled the revenue gap. And in 2010, the franchise tax actually brought in 9.3 percent less than the previous year because of a bill Perry approved in 2009 that created exemptions for small businesses.

The Tribune isn’t quite sure how the Perry campaign calculated this one. According to preliminary June 2011 data from the Bureau of Labor Statistics, Texans earned $800 a week on average, which would amount to less than $41,600 annually if the worker never takes a vacation.

Average earnings also give a skewed impression of the income of the workforce, because a few number of extremely high-income workers can offset a large number of extremely low-income workers. If you consider the median wage of Texans instead of the average, half of workers in the state earned $31,500 or less in 2010, according to data released by the Texas Workforce Commission.

The Perry campaign presumably tries to account for the criticism of overlooking low-wage workers by including the note that 95 percent of workers are paid above minimum wage. That’s true. But Texas is often criticized for the relatively high number of workers that are paid at or below minimum wage, and for legitimate reason.

With those numbers adjusted to account for the size of the workforce, both states also had the greatest and second greatest percentage of hourly workers paid at or below minimum wage. But in Texas the percentage was more than double than in New York — 12.6 percent compared to 6.1 percent.

Editor's note: This story was changed to correct the amount of revenue collected from the state's sales tax in 2010. The story originally said more than $19 million was taken in. The correct number was more than $19 billion.

The Perry campaign's infographic is below: 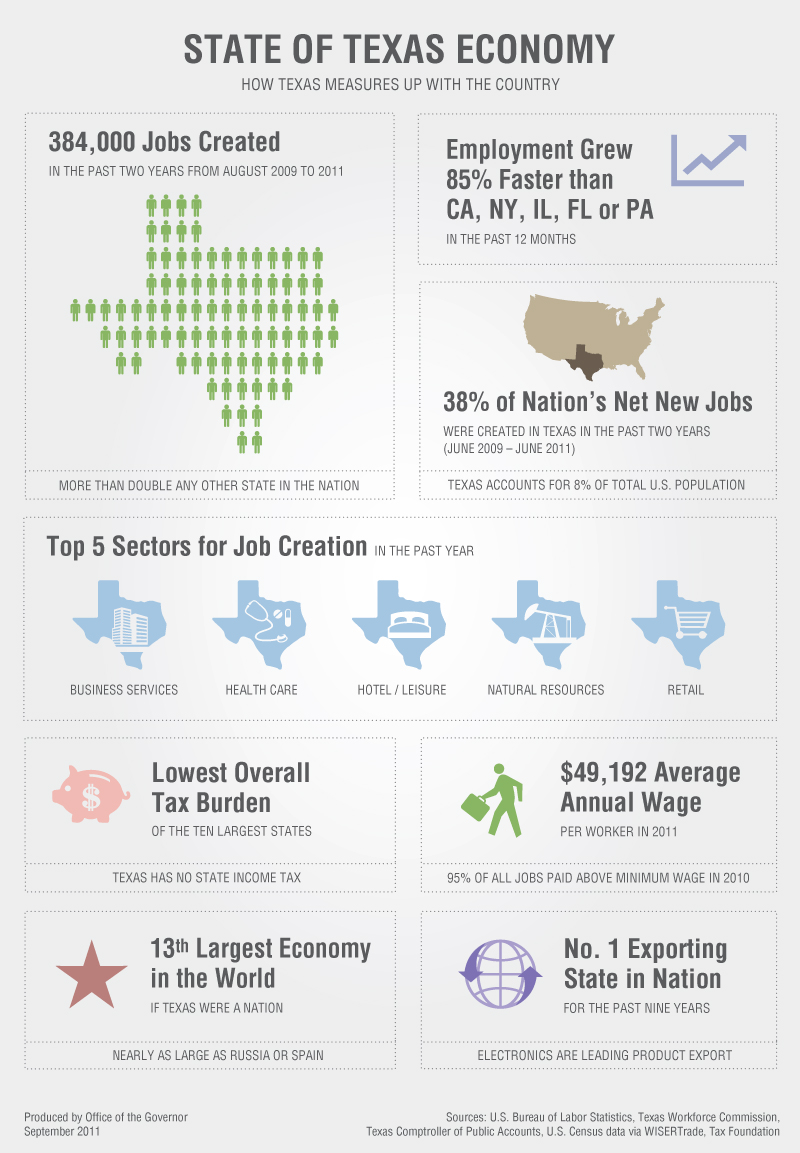