HOUSTON — It was 1 a.m. when Acy Williams, a slight, 53-year-old homeless man, walked out of the Harris County Jail and onto the dark, desolate streets of downtown Houston. He wore plastic flip-flops, dingy scrubs and a black fedora. He had no money and no phone, and the Houston Metro buses ran infrequently at that late hour. He decided he would just have to walk several miles across the city to the spot in South Houston where he hoped his belongings were still safely stowed.

Williams is one of the dozens of inmates who are turned loose every day, around the clock, from that huge lockup. In fact, in county jails statewide, inmates are often released in the dark of night — sometimes miles from town — with little or no money and no transportation. In Cameron County, in the Rio Grande Valley, a woman who had just been released was killed when a car struck her as she walked away from the jail in the middle of the night. Others have reported being physically and sexually assaulted as they tried to make their way home.

Despite the horror stories and pleading from inmates’ advocates and their families, state lawmakers this year failed to approve legislation that would limit jail releases to daylight hours. The Sheriffs’ Association of Texas opposed the measure, arguing that the problem should be solved locally and not mandated by lawmakers.

“Sheriffs in many counties seem to say that it doesn’t matter what happens once the person is not in custody,” said Diana Claitor, founder of the Texas Jail Project, which advocates for local jail inmates.

Harris County Jail, the third largest in the nation, books and releases about 400 inmates a day, said Alan Bernstein, a spokesman for the Harris County Sheriff’s Office. For each release, fingerprints are collected to ensure that the correct person is being released, belongings must be retrieved from two locations, and inmates are transferred to a holding
area.

“Do we release some people in the middle of the night?” Bernstein said. “Yes, we do, because legally we don’t have the authority to keep them — and they’re not volunteering to stay.”

On the Thursday morning this month when Acy Williams was released, about a dozen inmates trickled out of the giant facility between midnight and 2 a.m. Cars, filled with families, friends and others who had waited hours for inmates to be released, lined the street around the lockup. Just beyond the jail’s perimeter, advocates say, awaits a gantlet of danger, particularly for women: drug dealers, pimps and human traffickers eager to prey on the vulnerable and desperate.

“The streets ain’t nothin’ nice,” Williams said as he rifled through the black bag slung over his shoulder, searching for a watch he knew he had when he entered the jail. But before he left, Williams said, he would wait for his girlfriend, also homeless and in jail, to be released. “She’ll be safer with me,” he said. 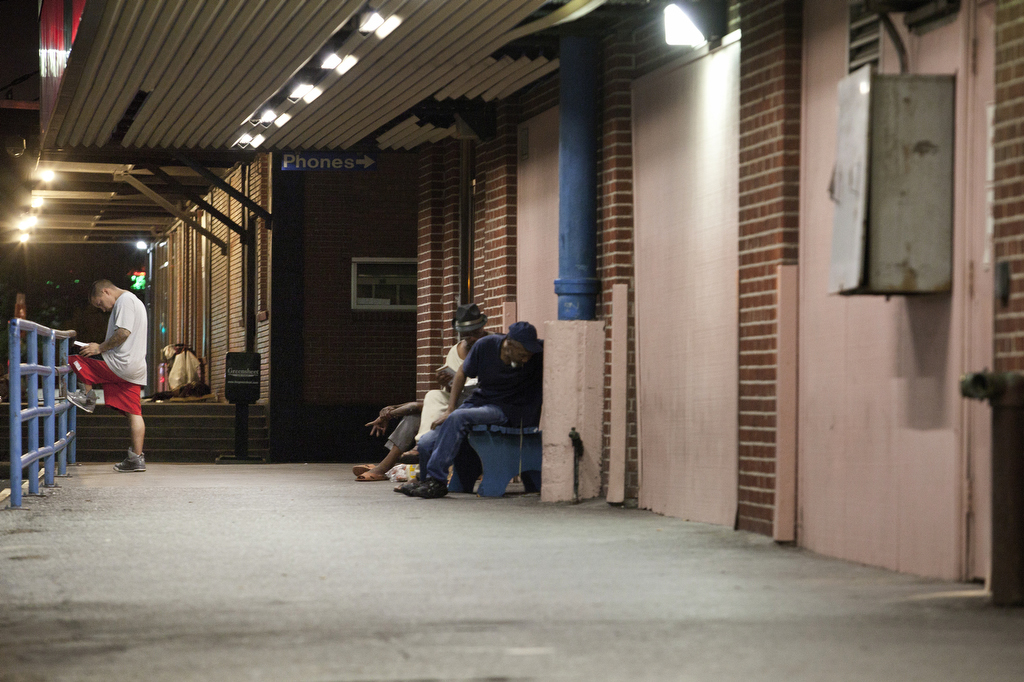 Enlarge photo by: Todd Spoth
Recently released inmates wait on a corner near the Harris County Jail for their rides and other arrangements on Aug. 11, 2011. The corner is often populated with confused inmates who have just been released and are trying to find their way back home or sometimes just a cigarette.

Claitor said she had received many calls and e-mails from jail chaplains, family members and former inmates who were left scared, penniless and even shoeless on the streets. Jennifer Webb, 26, told Claitor in an e-mail that she was released from the Dallas County Jail in February at 4:30 a.m. She had no shoes and was not allowed to call her father. Weeping and frightened, she began to walk home when a kind stranger offered her a ride.

“I was crying and had a hard time seeing with my contacts in, and frantically trying to get some kind of help to get out of this area and to my dad’s,” Webb wrote.

Gail Hanson, a jail chaplain in Brownsville, said, “Jails are horrible any way you look at them, but to have served your time and then die or suffer something like that as you’re released, it’s like, ‘Ah, couldn’t you just get her home?’”

Many jail chaplains, like Hanson, have taken on the task of picking up the most vulnerable inmates when they are released. But Hanson was not there the night last June when Priscilla Falduto was released from the Carrizales-Rucker Detention Center in Cameron County. Falduto had been arrested after she was found swimming nude in a public fountain. As she walked away from the jail days later at about 10 p.m., she was struck by an SUV and killed, according to local news reports.

The jail is in a rural part of the county, Hanson said. The nearest pay phone is a two-mile walk. Sometimes, inmates’ personal items, like wallets, purses, cellphones and identification, are not returned to them when they leave because the property room is closed.

In Houston, George Bement, a case manager, therapist and former pastor, is often there to meet homeless inmates — many of them mentally or physically disabled — when they are released from the Harris County Jail. At Healthcare for the Homeless Houston, Bement and a small staff provide psychiatric and medical care and direct the former inmates to social services. They help the ones they can, but Bement said he knows that there are many others.

At the Harris County Jail, Bernstein said, women eligible for release after dark are allowed to stay until daylight. And jail officials can make arrangements to release mentally ill and disabled inmates into someone else’s care. But he said most people want to be released as soon as possible, even if it means going out onto the dark, dangerous streets with no resources.

Although the Harris County Sheriff’s Office initially opposed the so-called “safe release” measure in the Legislature, Bernstein said the county supported it after negotiating with the bill’s writers to incorporate more flexibility. As revised, the measure would have allowed sheriffs to begin the release process up to 18 hours earlier than an inmate’s scheduled release time.

The sheriffs association still worried that the compromise would take away local control. Sheriffs do not intentionally put people in harm’s way, but if there are problems, the fix should come from local officials, said Brazos County Sheriff Chris Kirk.

“An adult inmate that has completed serving their time,” Kirk said, “they have personal responsibility for their own care once they’re released.”