To hear him tell it on the presidential campaign trail, Gov. Rick Perry has never met a tax increase he liked.

But at home, over a political career that reaches back to the oil price shocks of the 1980s, Perry has embraced billions of dollars worth of them — including a $528 million tax hike approved in 1990, after he defected to the Republican Party.

The biggest tax increases came early in his career, before anyone used the phrase “Tea Party” to describe a potent political movement. But a few weeks ago, Perry also signed into law an online sales tax measure the state says will raise $60 million over the next five years. Grover Norquist’s influential organization, Americans for Tax Reform, calls the measure a dreaded  “new tax.” Perry opposed it as a stand-alone measure, but this summer it got tucked into a must-pass bill during a legislative session that otherwise saw deep budget cuts.

The past votes and more recent tax legislation are sure to get a new look from opponents as Perry, now a Republican front-runner, touts his tax-cuttin’, budget-slashin’ ways as an antidote to the ailing economy — and a president he attacks as recklessly profligate.

“To the extent that he tries to oversell this in a campaign, people are going to pick at it,” said James Henson, who directs the Texas Politics Project in the Department of Government at the University of Texas and is co-director of the University of Texas/Texas Tribune poll with Daron Shaw. “The question is, will his opponents be able to outmaneuver him to create a high level of dissonance between his record and what he says.”

Perry’s views on taxes and spending put him firmly in the conservative camp, both during his time as a young Democratic legislator and as a seasoned Republican governor. Despite a 2011 budget shortfall estimated at as high as $27 billion, Perry steadfastly opposed tax hikes to bridge the gap. He took a similar approach in 2003, another lean budget year.

Perry has also supported tax breaks for small business and, as part of a giant tax swap in 2006, claims credit for record property tax cuts of more than $16 billion.

“Look at the overall picture,” said Perry spokesman Mark Miner. “The governor has a record of cutting taxes and fiscal responsibility. He’s the only governor since World War II to sign a budget that appropriates less general revenue than was spent in previous terms.”

But throughout his career, Perry has shown a willingness to compromise on an issue that today tends to produce only sharp partisan divisions and, in Washington, outright gridlock.

In particular, Perry’s record as a member of the Texas House — including a key vote taken after he became a Republican in 1989 — would today make him an easy target of the Tea Party conservatives who have helped fuel the governor’s rise in the 2012 race.

Perry consistently voted to prohibit a state income tax. But during his six years in the Legislature, he voted more than a dozen times to allow higher taxes or to raise them. He repeatedly joined the Democratic House majority in voting to raise the sales tax, which went up to 6.25 percent from 4.125 percent while he was in the House, records show. Taxes on motorists, corporations and liquor also rose during those years, with Perry’s blessing.

In 1987, facing what was then the worst shortfall in state history, Perry voted for what is still the largest tax increase in state history — sweeping legislation that raised the sales tax to 6 percent, increased corporate tax rates, pushed up the cigarette tax by more than a nickel per pack and slapped a 6 percent tax on insurance premiums.

The bill raised more than $5 billion. Two years later, Perry became a Republican and voted against a half-cent increase in the sales tax during one of four special sessions called to reform the state’s shaky school finance system. Then-Gov. Bill Clements, a Republican, later vetoed that bill, but he signed on to a compromise quarter-cent increase in the sales tax — and Perry fell in line behind him.

Dale Craymer, head of the pro-business Texas Taxpayers and Research Association, said it is hard to compare the Legislature that Perry entered in 1985 with the one he interacts with today as governor. Back then, compromise was not an epithet. 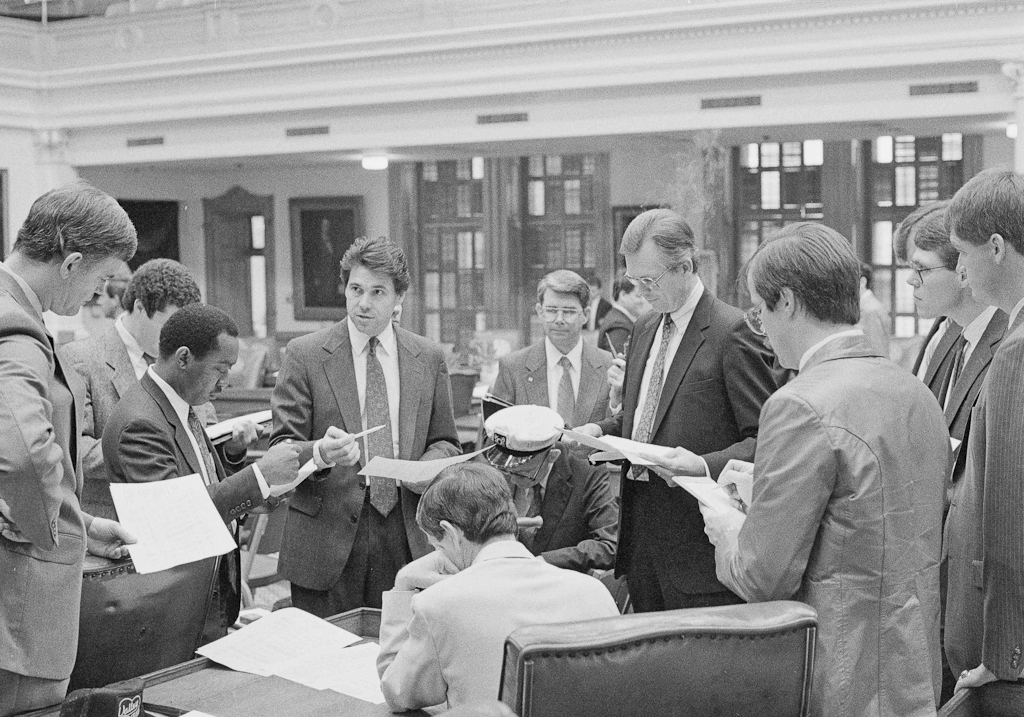 “It was quite a different environment, and, frankly, he’s a much different person,” Craymer said. “There were much freer negotiations between Democrats and Republicans. Both sides would give a little. Nowadays nobody gives.” He said Perry’s no-new-taxes pledge in spite of huge budget shortfalls in 2003 and 2011 are a better indication of where the governor stands on taxes today.

Perry's most ambitious tax reform came in 2006. He had appointed a bipartisan blue-ribbon panel, similar to committees in Congress that have suggested tax changes, to help cobble together a new business tax. Ultimately, the reforms adopted by the Legislature raised cigarette taxes by $1 a pack and vastly increased the number of businesses subject to the state franchise tax — all in exchange for billions of dollars in property tax reductions.

Perry was harshly criticized at the time by anti-tax conservatives, who said the business tax overhaul was an income tax in disguise. Critics also say big refineries and other property-intensive businesses got huge breaks while medium-sized businesses got stuck with higher bills.

Chuck Toudouze, the former owner of the now-closed Toudouze Market in San Antonio, said he saw his taxes shoot up more than 700 percent (to over $17,000) by 2010, when he closed the grocery warehouse.

He said Perry’s motivation was sincere and applauded him for steadfastly opposing a state income tax. But Toudouze said the paltry property tax relief he saw did not make up for his business tax increases.

“For it just to continue to go up and to constantly have to fight it, it’s just beleaguering,” Toudouze said. “Was this a tax increase? Yeah, it was an increase. The margins tax was an increase in tax for us. The property tax cut was just a sick joke.”

The governor has also faced muted criticism about the most recent tax to hit the books in Texas — designed to scoop up millions in revenue officials say is lost in online sales by retailers like Amazon. Miner, the governor’s spokesman, said Perry was “adamantly opposed” to the measure and vetoed a stand-alone version of the bill in the 2011 session.

Over his objections, lawmakers put it back into a kitchen-sink bill that included everything from new driver’s license requirements to a complicated re-write of school finance formulas.

Perry signed the bill on July 19.

“It is certainly an attempt to tax the Internet, even though it is broader than that,” said Kelly Cobb, the governmental affairs manager for Americans for Tax Reform. “It is a new tax, and we disagree with it on policy grounds for sure.”