Former Texas Railroad Commissioner Michael Williams, who has been running a Republican primary campaign to succeed Kay Bailey Hutchison in the United States Senate, has begun actively soliciting endorsements for the congressional seat he intends to seek instead, according to an email obtained Monday night by the Tribune.

In the email, which was sent to more than two dozen Republican precinct chairs, a staffer who identifies himself as working for the Michael Williams Committee explains that Williams "is very excited about the opportunity to run for Congress in the newly created district 33 and we're currently rounding up endorsements to show a strong and early foundation of support for his candidacy." The full text of the email, which includes an endorsement pledge form with a header that reads "Williams U.S. Congress," is pasted below.

A source close to the Williams campaign says nothing has changed from late last week, when the Tribune first reported that he was likely to drop out of the Senate race and run for Congress but was waiting for the Texas Legislature to pass congressional redistricting maps before making his final decision. On Monday, the Texas Senate approved the maps. The Texas House is expected to follow suit later this week.

However, the source confirmed that Williams would no longer be taking part in the Tribune's U.S. Senate Candidate Forum on Wednesday night, since "he shouldn't participate if he's not likely to run."

Sorry I missed you today. Hopefully you’ve received my message, if not please feel free to give me a call at the number below. Michael is very excited about the opportunity to run for Congress in the newly created district 33 and we're currently rounding up endorsements to show a strong and early foundation of support for his candidacy.

I encourage you to either give me a call back at one of the numbers listed below or to visit Michael’s website at WilliamsForTexas.com. I've attached our endorsement form. If after talking with me or looking into Michael’s positions on issues and his impressive record as a conservative leader please consider filling it out and faxing it back to me.

Again, thanks for your time; I look forward to working with you to send Michael to Washington. 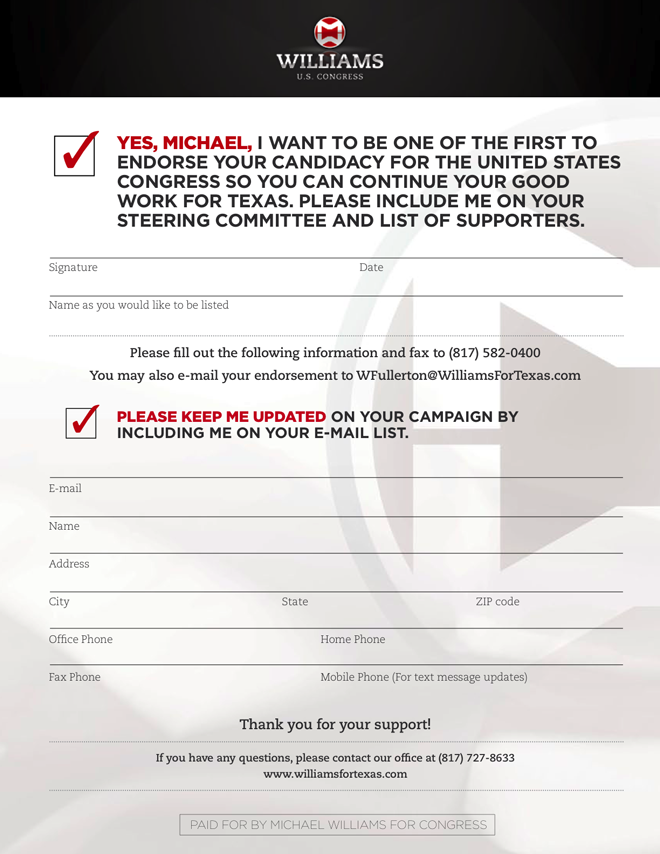