Brady Knowlton has scurried up trees to escape elephants. He has been chased by lions. But in years of hunting, he said, no experience compares to plunging his bare hand into murky water and feeling the powerful jaw of a big catfish clamp down on his arm.

“This is just a very unique thrill,” said Knowlton, a the 30-year-old Dallas outdoorsman who has been hand fishing, or “noodling,” since he was a teenager. But to get his hands inside a catfish’s mouth legally, Knowlton must go to Oklahoma. Hand fishing is a Class C misdemeanor in Texas, punishable by a fine of up to $500. But that may not be the case for much longer. State lawmakers on Thursday approved a bill to legalize hand fishing, and the bill is now on its way to the governor’s desk.

But noodling has its detractors. In what could be seen as fishing’s class warfare, traditional rod-and-reel fishermen say noodlers tarnish the reputation of the up-and-coming sport of catfishing. And they worry that hand fishing could decimate the population of large male catfish.

“I had no idea it was against the law,” said state Rep. Gary Elkins, R-Houston, who introduced a bill to legalize it. He said he could not imagine sticking his own hand down a fish’s gullet, but that he did not see why the state should prohibit those who enjoy it from doing so.

It comes with some risks — including run-ins with snakes or snapping turtles and the potential loss of a digit or two. But Knowlton said it is a great way to enjoy nature. And using your bare hands to wrestle down a catfish that can weigh as much as 60 pounds, well, just seems more sporting. 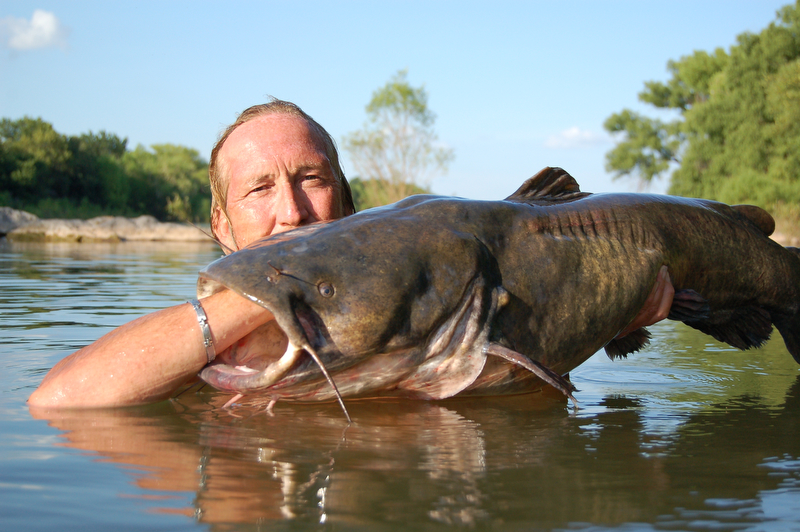 Noodling worries opponents of hand fishing because it is practiced during the summer spawning season. Females lay their eggs in underwater burrows, which are guarded by males, whose protectiveness makes it possible for the noodler to stick a hand into a burrow and come out with an aggressive catfish. The noodler’s score means one less big catfish in the population and leaves those eggs vulnerable to other predators.

Noodlers and some biologists dispute the argument that noodling affects fish populations differently than other forms of fishing. It is no different than snagging fish on the end of a hook, they say.

Texas Parks and Wildlife Department officials will not speak for or against pending legislation, but officials have expressed some concern that noodling could deplete isolated populations of the long-lived and difficult-to-breed flathead catfish, the species noodlers typically pursue.

John Tibbs, a fisheries biologist with the department, said a shift in the size of the fish because of noodling, while possible, seemed “highly unlikely.” The wildlife department could respond to particularly sensitive populations with specific limits and regulations, he said.

But Chad Ferguson, a Texas fishing guide, is worried that noodlers will damage the growing sport of trophy catfishing.

“The mentality of most of these guys attracted to noodling is to catch the biggest fish that they can and to keep everything that they catch,” said Ferguson, who has been a guide for 10 years.

The growing popularity of trophy catfishing has led to more tournaments with bigger prizes and has turned the catfish into one of the top game fish in Texas, Ferguson said. “It’s a black eye for the progress that we’ve made to really take the sport of catfishing to a more professional level,” he said.

Bradley Beesley, an Austin filmmaker and noodler who has made two documentaries about the practice and runs a noodling tournament in Oklahoma, is familiar with that sentiment. Noodlers are often placed at the bottom of the fishing hierarchy, he said, with rod-and-reel fishermen and their expensive equipment at the top.

To Beesley, it is an unsporting assessment of his passion. “It’s simply the fairest way to combat another beast on their terms,” he said.